A brief, but grimly worded new Security Council (SC) report circulating in the Kremlin today noting the vastly different accounts emerging yesterday from what was discussed during socialist leader Joe Biden’s first call with Chinese Communist leader President Xi Jinping, says important to notice was that immediately after this call ended, Biden’s socialist Democrat Party blocked an amendment in the US Congress to ban stimulus funds from going to Chinese Communist Party-tied entities.

After which Biden then shifted the official justification of America’s illegal presence in Syria from “guarding oil” to “fighting ISIS”—sees Biden’s further moves to placate Iran not going down very well in the respective Arab Gulf capitols—that Biden joined with his ordering a massive military exercise to begin on Russia’s borders in the Black Sea and Balkans—then saw Biden flexing his military might on Russia’s border in Norway in a move being called a “Show Of Force Unseen Since Cold War”—and in the most insane move, Biden ordered NATO to tell Ukraine that the “door remains open” for their membership bid to this US-led military alliance—which if ever happened, would cause an instant state of war to exist between the Russian Federation and the United States.

War moves being made by Biden coming at the same time renowned diplomatic strategist Professor Glenn Diesen at the University of South-Eastern Norway has stated: “The West has failed to realize that Russia has given up on greater Europe and no longer cares what the EU thinks”—who’s now been joined by German Foreign Minister Heiko Maas warning Biden to stop attacking the Nord Stream 2 pipeline because he should “think about what it would mean in terms of the prospects for influencing Russia from Europe”—then saw Foreign Minister Maas directly warning Biden: “You say that, because of the events in Russia, we should no longer do business with it…I don’t value the strategy of burned bridges, it is not only wrong, but also dangerous”—and in a further warning, Russia directly called on the American high command “to stop recklessly saber-rattling and mind your own business in the territorial waters of the United States”, then added that “the peace and security of the Black Sea needs no alien interference”, and objectively stated the truth: “It looks like the US 6th fleet can’t wait to find an enemy in the Black Sea…It is desperately looking for a pretext – now openly under the banner of warfare exercises – for ramping up their presence in the region”.

Though most troubling to notice about these war moves being made by Biden are them all occurring without the knowledge of the American people—who instead of being allowed to know how close Biden is bringing them to the edge of a nuclear war apocalypse, are being deliberately distracted by a Soviet-era police state “show trial” of President Trump turned into a “clown circus”—that yesterday ended with a descent into chaos after enraged Republican Party leader US Senator Mike Lee erupted in fury at the socialist Democrat Party impeachment leaders who deliberately lied about him—a deception that beforehand was joined by socialist Democrat Party leader US Congressman Eric Swalwell being caught using faked photoshopped evidence—and astonishingly saw these socialist Democrats showing what they called video evidence of the breeching of the US Capitol without them informing anyone it was filmed by radical Antifa terrorists—which is why experts are countering the socialist Democrats claim that Trump supporters were behind the 6 January protests.

Experts being ignored by the leftist mainstream propaganda media—with this being best exampled in the just published New York Times article “I’ve Studied Terrorism for Over 40 Years. Let’s Talk About What Comes Next”, wherein its so-called terrorism expert solemnly intones: “We spent decades looking for a threat from overseas, when we needed to be looking closer to home”, then comically states: “Many of those leading the charge at the Capitol are already well acquainted with violent tactics and the guns that go with them, like The Oath Keepers that attract people with military or police training, and the Proud Boys”—and is comical because The Oath Keepers leader Thomas Caldwell is a long-time known FBI-US Navy intelligence operative holding top secret clearance, as well as Proud Boys leader Enrique Tarrio being a long-time known “prolific” FBI informant—both of whom plotted the US Capitol breech using leftist social media giant Facebook, and most certainly not the free speech site Parler as the records clearly prove—and for anyone using the social media Signal app to communicate, court records show the FBI reads them all the time.

With the claim being made at this “show trial” that a police officer was deliberately killed when the US Capitol was breeched, it’s not surprising to notice that no evidence of this happening even exists—a fact noticed by Fox News host Tucker Carlson last evening, who devoted his entire monologue to the questions not being answered in this “show trial”—though most critical to notice about yesterday’s “show trail” proceedings, was that after ended it saw Republican Party leader US Senator Lindsey Graham going on live television to state: “I hope the Democrats are watching…the not guilty vote is growing after today because most Republicans found the presentation by the House Managers offensive and absurd”.  [Note: Some words and/or phrases appearing in quotes in this report are English language approximations of Russian words/phrases having no exact counterpart.] 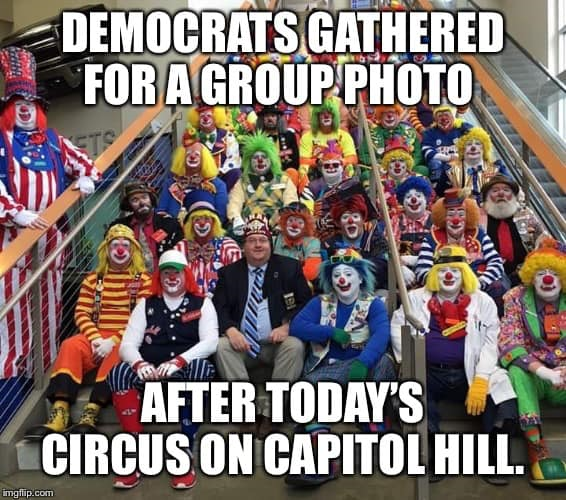 February 11, 2021 © EU and US all rights reserved. Permission to use this report in its entirety is granted under the condition it is linked to its original source at WhatDoesItMean.Com. Freebase content licensed under CC-BY and GFDL.