Following the collapse of the Soviet Union in the early 1990s, I was able to attend a number of conferences being held at the Saint-Petersburg University of the Ministry of Internal Affairs of Russia—in February-1994 to be exact—the subject matter of which was how to create and maintain an entirely new civil bureaucracy based on the rule of law.

The talks were lively and contentious, but above all fascinating because nobody really knew what they were talking about, and was to be expected as all the main speakers had grown up in a socialist-communist system of government, but whose few exceptions was a cadre of young students working on their doctoral dissertations.

Following one of these contentious meetings I was invited by my driver-interpreter to attend a birthday party for one of these doctoral students, who was turning 30, and in my conversations with him found that he possessed a keen insight into the current situation his country was facing, and is why I made a mental note to keep track through the coming years of his progress and accomplishments—and I’m glad I did, because this doctoral student went on to receive his Ph.D., rose steadily through the Russian bureaucracy, today is the Speaker of the Russian State Duma, their lower house of parliament, and is very likely to become the next President of the Russian Federation.

I’m pretty confident that barely any of you know the name Vyacheslav Volodin, but you should, because his rise and continuation in power since I first met him 27-years ago, I can assure you, is based on his keen intellectual insight and truthful analysis of complex issues—such as what is happening in the United States sees him observing that the country which “lectures the whole world” about the standards of democracy has “nullified its own democratic ideology”—and who plainly states: “Those who participated in unauthorized political actions everywhere were anointed by Washington as fighters for freedom and democracy…When the same thing happened in the United States itself, they labeled these people as domestic terrorists who face 15-20 years in prison…These will be real political prisoners…Let’s call a spade a spade”.

When sober minded analytical people like Speaker Volodin make such a statement as this, it must first be viewed as hyperbole (an obvious and intentional exaggeration), then it needs to be measured against existing facts—both of which are parts of a logic equation used to determine truth—and in this instance I’ll use to examine his statement that America has “nullified its own democratic ideology”.

My examination of factual evidence first leads to the Washington Post admitting that President Trump didn’t incite the Capitol riot, in fact, their own investigation proves it was planned prior to Trump saying anything—but because of the lies told about what happened, now sees factual articles appearing like “Biden has Maybe 2,000 Attendees at Inauguration — and 25,000 Military — Just Like They Do in Lawless Banana Republics”, that says: “Joe Biden was sworn in today as the 46th President of the United States...They say he had 81 million votes...No one turned out to see Biden. A few hundred or maybe a thousand listened to him blather and slur his words”—and—“Biden’s Inauguration Featured The Mother Of All Motorcades With Seven ‘Beast’ Limos”, that says: “With four presidents and an armada of armored cars in tow, it was the biggest procession we have ever seen the Secret Service put on”.

In my examination I find it also important to note the articles “Biden Inauguration Video Gets Only 320,000 Views on Official White House YouTube Channel – Comments Turned Off – But Biden Got 81 Million Votes”, “Trump’s Parting Speech Beats Biden’s Inaugural in YouTube Views at Both ABC and CBS” and “President Trump Gets a Hero’s Welcome in Florida”.

My examination of the inauguration itself sees it best being described in the articles “Let the Hunger Games begin? Biden’s Inauguration Draws Dystopian Fiction Comparisons As New President Calls For ‘Unity’”, “The ‘Hunger Games’ Inaugural — Similarities are Eerie!” and “CNN and NY Times Get Blasted For Gushing Over Biden Worse Than North Korean State TV”.

After this “Hunger Games” inauguration my examination then led me to the truthful articles “Biden Signs First 17 Executive Actions Starting With Mask Mandate, “Racial Equality” & Rejoining Paris Accord”,  “Biden Admin Deletes ‘1776 Commission’ from White House Website Immediately After Inauguration” and “Biden Replaces Andrew Jackson Portrait In Oval Office”—a replacement of the portrait of the man who founded the Democrat Party that Biden now leads, and to understand why just read Sister Ciara’s letter sent you yesterday “America Enters Geriatric Interlude Blinded To What Happens Next”.

Therefore, and with the above stated factual evidence, my initial examination of Speaker Volodin’s statement that the United States has “nullified its own democratic ideology” is provably truth—a truth further supported by Biden himself, who in his inaugural speech demonized some of his own fellow Americans by branding them as domestic terrorists—sees fact based articles now appearing like “‘F**k Every Single Trump Voter’: Biden May Be In, But Hollywood’s & Media’s Crusade To Destroy Conservatives Is Just Beginning” and “‘Even Libertarians’: John Brennan Issues ‘List’ Of Ideologies Biden Intel Community Should Go After”—and most chilling of all, today sees leftist big tech giants like Twitter, YouTube and Facebook promoting a video that’s been already been viewed by over 4-million Americans calling on them to became state informants, and says:

They are hidden among us, disguised behind regular jobs.

They are your children’s teachers. They work at supermarkets, malls, doctor’s offices, and many are police officers and soldiers.

In this new war, the battlefield has changes. Computers can be more valuable than guns.

And this is what we need now more than ever: an army of citizen detectives.

Our weapons will be computers and cellphones. We, who are monitoring extremists on the internet and reporting our findings to authorities.

Remember, before the Navy Seals killed Osama Bin Laden, he had to be found. He was found by a CIA analyst working on a computer thousands of miles away. 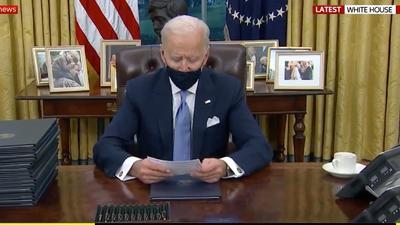 Masked Man has given fair warning—“We are coming after YOU!”

No matter what “regular job” you have, or how “ordinary” you think you are, if you support freedom, you nation’s history, or heaven forbid support President Trump, congratulations—you are now full fledged Enemy of the State!

And by being an enemy of the state, you are now entitled to all of the rights and privileges afforded to “domestic terrorists” throughout human history—the most important of which is the right to ignore and mock those branding you as such—that’s better known as subversion, that refers to a process by which the values and principles of a system in place are contradicted or reversed, in an attempt to transform the established social order and its structures of power, authority, hierarchy, and social norms.

Subversion of a corrupt political system and its despotic ruling class is neither violent nor confrontational, either—as best most recently exampled by the 287-million peoples of Russia who brought about the collapse of the most ruthless and feared socialist-communist system in modern times without a firing a single shot—was accomplished when these “ordinary” people finally awakened to the reality that is was impossible to imprison them all—and when awakening to this truth, saw them turning the tables on their oppressors.

One of my favorite remembrances of those times was when “ordinary” Russians turned against the “army of citizen detectives” the state had set against them by filing complaints of suspected subversion activity against everyone—complaints the state had to investigate, but between 1989-1991, saw the entire system breaking down because complaints had been filed against over 180-million people—the modern day counterpart of which today would see millions of Americans flagging every posting and video on social media as suspected of being “domestic terrorism” or “white supremacist”, all of which would have to be investigated, but in the process would grind everything to a standstill.

Another subversion action undertaken by the Russians saw millions of them daily writing notes saying such things like “Andropov Is Dead” or “Brezhnev Is Dead” (Soviet leaders) and placing them in markets, apartment hallways, factories and office buildings—the modern day counterpart would see millions of Americans writing notes like “Biden Is NOT My President” and placing them everywhere, too.

The most effective subversive tactic used by Russians, however, was the spreading of truthful information—near exclusively done by simple newsletters groups like the Sisters write that were then copied and passed around by the millions—the modern day counterpart of which are websites like ours, social media postings and emails.

The “glue” that has always held subversives together throughout history is them always supporting each other—and is why I’m asking for you to support the Sisters in their mission to aid you in this great hour of need—and is critically needed, as you’ve all noticed, because they’ve had to pay money they don’t have to further protect our under attack computer servers—an attack which made it hard for you to bring up our site, but for the moment we’ve solved—which is the point of these attacks in the first place, as they’re designed to limit traffic on sites like ours telling the truth.

Do you know that if everyone reading this gave just $20 right now we’d be able to survive this attack and keep providing the truth to you?  Is that too much to ask?  Does the price of truth and facts, and the labor it takes to assemble them have no value anymore?

These are questions I hope you ask yourselves before turning away—and I hope most of all that in the future you remember these times when so little was asked of you for such a noble cause as truth and freedom, and how you responded.