A fascinating new Security Council (SC) report circulating in the Kremlin today first noting that the flow of Russian natural gas to Germany through the Nord Stream pipeline has been suspended, says volume through the pipeline had already been reduced by 60% last month due to operational challenges caused by the failure to return a serviced turbine on time from Canada, and this morning it was revealed that Canada plans to return a repaired Nord Stream gas turbine to the pipeline operator after 14 July.

At the exact moment Russian natural gas supplies were suspended, this report notes, the political party of German Chancellor Olaf Scholz was rocked by a date-rape drug scandal—a political sex scandal joined by top German newspaper Bild revealing: “Gas shortages and skyrocketing heating costs might see many Germans unable to afford their heating bills this winter...The nation’s Cities and Municipalities Association has suggested providing the most vulnerable people with public “warm-up” places instead...Some German cities have already gone ahead with such plans”—and in the latest economic assessment made by the University of South-Eastern Norway, sees it grimly warning: “By sanctioning Russia, Germany has destroyed its business model…Now it faces a possible economic catastrophe”.

In further unintended consequences striking the Western colonial powers over their sanctions on Russia because of the “Special De-Nazification Operation” to liberate Ukraine, this report continues, British consumer champion Martin Lewis is now warning: “Household energy bills are set to soar to more than £3,300 by winter, pushing millions into poverty”—a warning joined by Bloomberg News gravely assessing: “Operational challenges arising from soaring energy bills have put the entire United States industrial complex at risk of partial shutdown”—to what the under socialist siege American people are facing, it’s explained in the just published Wall Street Journal article “The Fed Ignored The Money Supply, And A Recession Is Coming”, wherein it reveals: “Jerome Powell said M2 doesn’t have ‘important implications’ as inflation hit a 40-year high...The relationship between money and inflation remains a mystery to many who should understand it—including Federal Reserve Chairman Jerome Powell”—in the just published economic article “Developing World To Face Wave Of Defaults” it sees experts warning: “National bankruptcies to precede political instability in emerging economies”—all of which more than explains why the International Monetary Fund issued a global economic alarm.

In responding to the present global crisis fast nearing catastrophic proportions, this report notes, European Union foreign policy chief Josep Borrell lashed out in rage because the rest of the world won’t join the Western colonial powers in their punitive actions against Russia, then he lamented: “The global battle of narratives is in full swing and, for now, we are not winning”.

As to why the Western colonial powers “are not winning” in “the global battle of narratives”, this report explains, is because, unlike what’s seen in the West, competing narratives in the rest of the world aren’t banned, censored and suppressed, which means that the majority of the world’s population know truths like: “The 2014 ouster of slightly Russian-leaning Ukrainian president Viktor Yanukovych, who drew his support primarily from the ethnic Russian–dominated eastern parts of the country, was spun by Ukrainian nationalist and Western media as a ”revolution of dignity”…It was in fact, in the words of Western security analyst George Friedman, ”the most blatant coup in history””.

Most certainly known about by the rest of the world, but all truth about is censored in the West, this report concludes, is Russian global construction titan Elena Baturina, about whom, in April-2022, a United States Senate executive summary definitive bullet point revealed: “Hunter Biden received a $3.5 million wire transfer from Elena Baturina, the wife of the former mayor of Moscow”—as the rest of the world also knows, is a US Senate revelation explaining why Elena Baturina is among the 45 Russian oligarch-billionaires not sanctioned by the Western colonial powers—in point of fact, all of the non-sanctioned Russian oligarchs are global construction titans like Elena Baturina, all of whom will divide between them multi-billion contracts to rebuild Ukraine—a fact explaining why the leftist Western colonial media remains silent about Supreme Socialist Leader Joe Biden paying for the Russian prostitutes used by his son Hunter—quickly joining the US Senate revelation it saw the New York Post further revealing: “Joe Biden wrote to his son Hunter and others close to him using the pseudonym “Peter Henderson” – a fictional Soviet Union-era spy in several Tom Clancy novels who infiltrated the US government, emails show”—and in “the global battle of narratives” that sees the Western colonial powers censoring these truths, the rest of the world made viral the hilarious movie meme poster depicting Socialist Leader Biden and Ukrainian President Volodymyr Zelensky entitled “JOE BIDEN As “Peter Henderson” Spy Tard”, on which it says: “All the bribes…All the hookers…Half the intelligence”.  [Note: Some words and/or phrases appearing in quotes in this report are English language approximations of Russian words/phrases having no exact counterpart.] 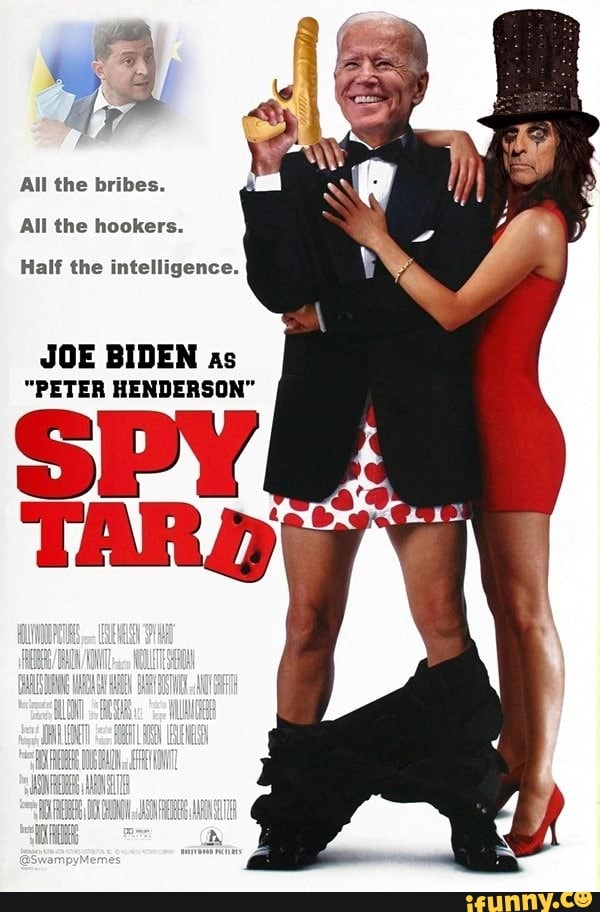 July 11, 2022 © EU and US all rights reserved. Permission to use this report in its entirety is granted under the condition it is linked to its original source at WhatDoesItMean.Com. Freebase content licensed under CC-BY and GFDL.