An insightful new Security Council (SC) report circulating in the Kremlin today first noting Defense Minister Sergey Shoigu announcing he reported to President Putin this morning that Russian troops and Donbass forces had completely liberated Lisichansk, the last major city which had remained under Ukrainian control since 2014, when the Lugansk People’s Republic declared its independence shortly after a coup in Kiev, says this announcement followed Ukrainian President Volodymyr Zelensky acknowledging last evening that more than 2,600 Ukrainian cities and towns were under Russian control—an acknowledgement of defeat quickly followed by the worst-ever shelling of Russian territory when enraged demonic Ukrainian Nazi forces launched three Tochka-U ballistic missiles loaded with cluster munitions at the Russian city of Belgorod, all of which were intercepted mid-air, but parts of one of the missiles hit a house killing up to 5 innocent civilians.

While the “Special De-Nazification Operation” to liberate Ukraine continues its battlefield victories, this report notes, the lunatic response by the Western colonial powers providing weapons to Ukrainian Nazi forces yesterday caused Germany to grimly warn that the cutoff of Russian natural gas will lead to rationing—a grim warning quickly joined by American financial giant JPMorgan Chase reporting: “Global oil prices could reach a “stratospheric” $380 per barrel if Western penalties prompt Russia to impose retaliatory output cuts”—and if occurs, would see the already under socialist siege Americans paying over $10 a gallon for gasoline.

When asked this past week by leftist CNN anchor Victor Blackwell: “What do you say to those families who say, ‘Listen, we can’t afford to pay $4.85 a gallon for months, if not years…This is just not sustainable’?”, this report continues, it saw Supreme Socialist Leader Joe Biden top economic advisor Brian Deese replying like a madman: “What you heard from the president today was a clear articulation of the stakes...This is about the future of the liberal world order and we have to stand firm”—a reply of socialist mental madness quickly responded to by Sky News Australia, whose panel of experts agreed: “The Biden administration will meet its ultimate demise over the liberal world order”—then it saw America’s most watched late news host Greg Gutfeld of Fox News exclaiming: “What a scary fast trip from America first to America last...That "liberal world order" phrase used to be something you might hear somebody on infomercials say – I'm sorry InfoWars say...But it actually was said, it was actually said out loud...That one sound bite should be in every commercial for every Republican campaign...You should play that liberal world order blurb to truckers, to parents buying food, to delivery workers, because it's this kind of, it's one of the biggest, like, reveals in history, in political history”.

Now joining the “scary fast trip from America first to America last”, this report details, is the just published Wall Street Journal article “Michigan’s Banana Republic Prosecution”, wherein it reveals the Michigan Supreme Court invalidated charges against former Republican Governor Rick Snyder after discovering socialist Democrat Party prosecutors used a one person grand jury and secret evidence to indict their political opponent—is a socialist banana republic form of injustice that just caused the Marshall of the United States Supreme Court to write a pleading letter begging the Republican governors of Maryland and Virginia to save the lives of Supreme Court Justices because the Biden Regime is refusing to protect them—this past week it saw America’s most watched newsman Tucker Carlson of Fox News horrifyingly documenting a pattern of arrests by the Biden Regime of people who disagree with Socialist Leader Biden—is a banana republic socialist criminalization of American politics fully supported by the leftist Washington Post, who, in their just published demented screed “We Can No Longer Avoid A Criminal Investigation Into Donald Trump”, declares without evidence or facts: “Mr. Trump is clearly, unquestionably guilty of committing a serious crime”, but in a rare acknowledgement of sanity, does sees them noting: “Attorney General Merrick Garland appears to be treating this prospect with a high degree of care, and appropriately so…A new administration prosecuting a former president of the opposite party would set a perilous precedent; one need only look at the long record of failed democracies abroad, in which new leaders tried those they deposed, to see the danger…Prosecuting Mr. Trump also risks helping him politically”.

Also fully supporting the banana republic socialist criminalization of American politics, this report concludes, are elite Hollywood leftists, who during the past day have renounced their nation’s 4th of July independence day, best exampled by leftist Hollywood reporter Alisha Grauso posting the vile message: “My mood this year is more like what about if we burn this country to the goddamn ground, as a little treat?”—and in viewing the landscape of a socialist destroyed America he put his life on the line to defend, it caused 100-year-old World War II combat hero US Marine veteran Carl Spurlin Dekel to beyond heartbreakingly collapse in tearful sobs and state: “People don’t realize what they have...The things we did and the things we fought for and the boys that died for it, it’s all gone down the drain...We haven’t got the country we had when I was raised, not at all…Our country has gone to hell in a hand basket... Nobody will have the fun I had...Nobody will have the opportunity I had...It’s just not the same and that’s not what our boys, that’s not what they died for”.  [Note: Some words and/or phrases appearing in quotes in this report are English language approximations of Russian words/phrases having no exact counterpart.] 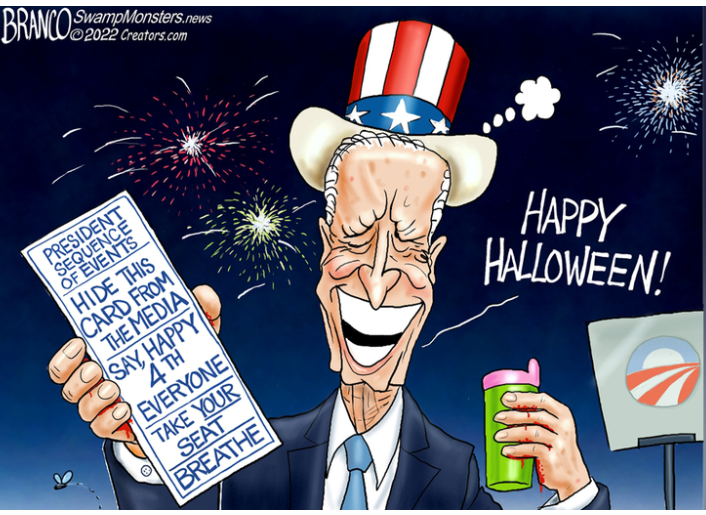 July 3, 2022 © EU and US all rights reserved. Permission to use this report in its entirety is granted under the condition it is linked to its original source at WhatDoesItMean.Com. Freebase content licensed under CC-BY and GFDL.