An enlightening new Security Council (SC) report circulating in the Kremlin today first noting Supreme Socialist Leader Joe Biden telling journalists yesterday: “I've made it absolutely clear to President Putin...If he moves on Ukraine, the economic consequences for his economy are going to be devastating...The impact of all of that on Russia and his attitude, the rest of the world, his view of Russia would change markedly...He'll pay a terrible price”, says he then stated that if Russia invades Ukraine: “We will find it required that we'll have to send more American and NATO troops into the Eastern Flank, the Bucharest 9 states: Bulgaria, Hungary, Latvia, Lithuania, Poland, Romania, Slovakia, the Czech Republic and Estonia, all those NATO countries where we have a sacred obligation to defend them against any attack by Russia”.

This transcript next sees Security Council Members discussing Biden’s threat to “send more American and NATO troops into the Eastern Flank” of Europe to confront Russia, and again sees them all agreeing that he must be “moonstruck”—specifically because, and although the United States is the #1 military power in the world, its forces are spread out to 750 bases in at least 80 countries worldwide and it spends more on its military than the next 10 countries combined—today 5,000 of these American military forces are based in Europe, if reinforced sees Biden only able to send 5,000 more troops, which would place on the Eastern Flank 10,000 American troops backed by 170 tanks, 380 armored combat vehicles and 70 artillery pieces—and would see these American troops facing off against Russia, the #2 military power in the world, whose not spread out around the world 3.5-million combat ready soldiers are backed by 13,000 tanks, 27,100 armored combat vehicles and 11,005 artillery pieces.

In the event of war breaking out between the Russian Federation and the United States, this report continues, NATO doctrine envisions rushing forces and equipment into such a conflict from their American bases—but whose plans to do so evaporated on 13 September 2021, which was when the Congressional Research Service (CRS) handed to the socialist Biden Regime its updated chilling report “Russia’s Nuclear Weapons: Doctrine, Forces, and Modernization”, wherein it documents that upon the outbreak of war, Russia’s largest in the world nuclear weapons arsenal would immediately first strike every NATO and American military base, airport and naval port facility everywhere on the planet—and further sees Russia having warned the United States that it will perceive any missile launched at its territory as a nuclear attack that warrants a full nuclear retaliation.

In knowing these factual realities, this report notes, French President Emmanuel Macron bluntly told the socialist Biden Regime that the issues involving Ukraine can’t be solved by pressuring Russia—a truth the socialist Biden Regime quickly responded to by attempting to steal from France its massive $9.4-billion arms deal with Greece—an attempted theft countered yesterday by France's Ministry of Armed Forces, who reported: “Since we have been in discussion with the Greeks, the American offer is no longer on the table... We also signed the contract with the Greeks”.

At the same time the socialist Biden Regime was attempting to steal the Greek arms deal away from France, this report concludes, it had its Ukraine puppet state try to force through the United Nations a “highly politicized draft document” condemning Russia’s presence on the Crimea peninsula—a vote that saw 77 nations siding with Russia, and 62 siding with Ukraine—after which the United States said it was holding off on a $200-million military aid package to Ukraine—that was followed by the Pentagon announcing it had sent a $60 million package to Ukraine that included 30 Javelin command and control launchers, as well as 180 missiles and the Americans saying they will give Ukraine $20-million for border security—all of which was followed by Ukrainian President Volodymyr Zelensky suddenly declaring: “I do not rule out a referendum on Donbass as a whole...It’s not a question of status...This could be about the Donbass, Crimea, and maybe in general on halting the war”—a declaration President Zelensky joined with the warning that “people preparing a state coup in the country continue to advance with their plans”—in a just released November poll sees only 23% of Ukrainians supporting President Zelensky—that makes it no wonder why top Ukrainian politician Evgeny Muraev said yesterday that life was easier for Ukraine’s embattled president when he was only playing the head of state in a TV comedy, and stated: “I don’t envy Zelensky”.  [Note: Some words and/or phrases appearing in quotes in this report are English language approximations of Russian words/phrases having no exact counterpart.] 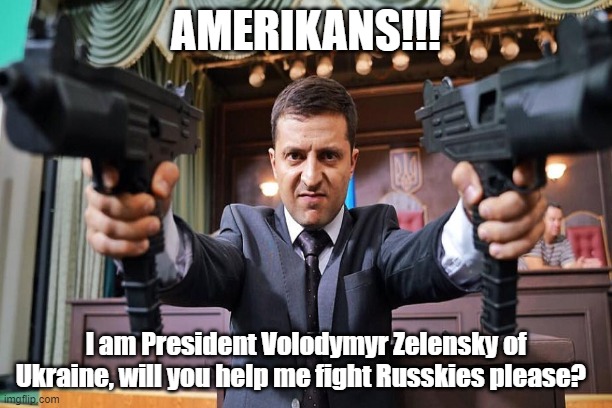 December 12, 2021 © EU and US all rights reserved. Permission to use this report in its entirety is granted under the condition it is linked to its original source at WhatDoesItMean.Com. Freebase content licensed under CC-BY and GFDL.