A brief, but very troubling new Security Council (SC) report circulating in the Kremlin today first noting Ambassador Anatoly Antonov announcing that the United States has yet to respond to a Russian proposal on nuclear war inadmissibility, says in response to this war move affront spokesman Dmitry Peskov stated the truth that: “Russia doesn’t meet any reciprocity in any of its attempts to normalize relations with the West”—a truth expanded on by Foreign Minister Sergey Lavrov, who when asked why Russia and the West are currently unable to find common ground as they did in 1990s, replied that relations were good “because no one in Russia had any objections about who is the master of the house”—with his exactly stating about the Americans: “And so they decided that this is it, the end of history…US political scientist Francis Fukuyama declared that from now on, the liberal concept will rule the world…Now they are again trying to bring the liberal idea to the forefront in this battle for influence on the international arena…But all those difficulties began when it became clear that Russia does not agree to live in a house with a self-appointed master”.

A “liberal concept” once again trying to be foisted upon the world by “self-appointed master” socialist leader Joe Biden, who yesterday displayed his skewed priorities by dropping winter storm shattered Texas from his traveling agenda—a stunning act breaking a long history of American leaders visiting regions of their nation hit with catastrophes—but whose true reason for doing so sees it being explained in a bombshell highly-classified “Of Special Importance” document prepared for Security Council Members by the Foreign Intelligence Service (SVR).

A document wherein SVR analysts devote a lengthy section detailing the activities of long-time known American operative David Huizenga, who holds the post of Associate Principal Deputy Administrator-National Nuclear Security Administration—and for reasons not revealed in the portions of this report permitted to be openly discussed by various ministries, was a contact of Russian citizen Demuri Voronin, who worked as a consultant in the German parliament, advising on energy policy—and who is now detained on high treason charges as prosecutors say he spied for a NATO nation.

High treason charges against this Russian citizen who’s an expert on German wind energy farms and their operations in extreme cold conditions—and prior to his capture, saw Biden appointing David Huizenga to be the Acting Secretary of Energy—a fateful appointment that doomed Texas to catastrophe—because, on 14 February, Acting Secretary of Energy Huizenga ordered Texas energy grid operator ERCOT to stay within green energy standards and not increase power ahead of this catastrophic polar vortex striking this State—the result of which caused a catastrophic failure as wind power generated electricity in Texas twice collapsed—which in turn led to the near total collapse of the entire energy grid in Texas, left millions without heat or power, has caused at least 47 deaths, and today sees this State suffering through a devastating water crisis.

With this order showing that Acting Energy Secretary David Huizenga did not waive environmental restrictions to allow for maximum energy output, with his instead ordering ERCOT to utilize all resources in order to stay within acceptable emissions standards, including purchasing energy from outside the State, the needless misery wrought upon these helpless citizens has just begun—specifically because the outside energy purchased during this catastrophe has to be paid for by individual homeowners and businesses—and because this order instructed an “incremental amount of restricted capacity” to be sold to ERCOT at “a price no lower than $1,500/MWh”, it now sees the cost skyrocketing by 6,000% over the February-2020 prices of $18.20—which has caused the citizens of Texas to erupt in fury as their electricity bills have now reached the astronomical level of $17,000 for just the first half of this month—and explains why electric companies in Texas are now sending out notices to their customers saying: “We want what's right by our consumers, so we are encouraging them to leave”.

With it further being noticed that right before Texas was shattered socialist leader Biden signed an executive order insanely giving Communist China immediate access to the entire American power grid, it makes it no surprise why an enraged Texas Governor Greg Abbott is demanding a full investigation, and his further revealing he was lied to—further makes it no surprise why articles are now appearing like “Is The Temporary Collapse Of Texas Foreshadowing The Total Collapse Of The US?”, that warns: “We are getting a very short preview of what will eventually happen to the United States as a whole…Texas has immense wealth and vast energy resources, but now it is being called a “failed state”...If it can’t even handle a few days of cold weather, what is the rest of America going to look like when things really start to get chaotic in this country?”—all of which comes at the same exact moment in time that Sky News Australia is telling the world what the leftist US media won’t even mention: “Never before has the leader of the free world been so cognitively compromised...It’s clear that US President Joe Biden is struggling with dementia and is clearly not up to the task he’s been sworn in to do”.  [Note: Some words and/or phrases appearing in quotes in this report are English language approximations of Russian words/phrases having no exact counterpart.] 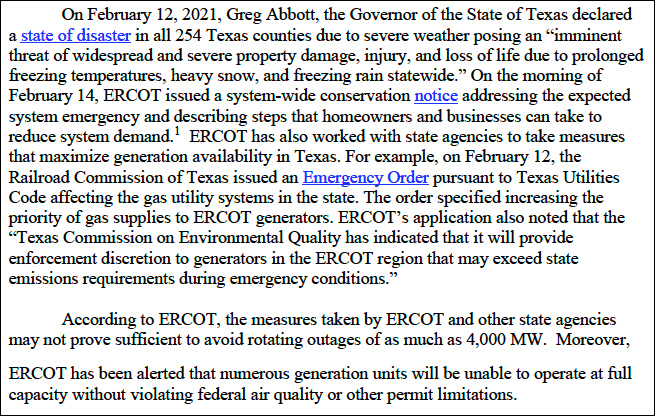 February 20, 2021 © EU and US all rights reserved. Permission to use this report in its entirety is granted under the condition it is linked to its original source at WhatDoesItMean.Com. Freebase content licensed under CC-BY and GFDL.