A very concerning new Security Council (SC) report circulating in the Kremlin today noting the warning message issued by President Putin during the World Economic Forum’s virtual Davos Agenda conference stating that society risks a return to world war if there’s no international effort to ease existing global tensions and imbalances, says his grim prediction that the current era shows parallels to the 1920s and 1930s before the catastrophic World War II was followed by him observing the possibility that we might experience an actual collapse in global development that might result in a fight of all against all that would result in a grim dystopia—and in directly addressing America’s manipulation and distortion of technology, information and global finances, saw President Putin directly warning them: “Such a game without rules is dramatically increasing the risks of the unilateral use of military force”.

A “game without rules” warning ignored by socialist leader Joe Biden, who continues to rule over America with an iron fist executive order spree of nearly 40 edicts not consented to by either his nation’s citizens or US Congress—executive orders Biden is having to rely on note cards to even know what he’s signing—and predictably have just been countered by the Attorney Generals from six States, who in their just issued warning letter state: “The President cannot cut constitutional corners or shirk statutory strictures without inevitably doing more harm to our country than good”.

All of which is occurring at the same time pro-Trump forces are striking back, as best described in the article “The GameStop Reckoning Was a Long Time Coming”, that says: “The hordes are here, and Wall Street will never be the same...This week, gleeful online hordes turned the stock market upside down”—the consequence of which is best described in the article “Mega-Investors Punished With $70 BILLION LOSSES”.

In reality, though, these “hordes” waging war against the elite Wall Street billionaires backing Biden are the over 3.8-million members of the WallStreetBets community—all whom used their $600 stimulus checks to outsmart the most experienced billionaires on Wall Street—who were quickly joined in this war by even more millions using the Discord messaging platform—with the common link between them being the stock trading app Robinhood.

Unlike the Robin Hood of English folklore who stole from the rich to give to the poor, however, the stock trading app company Robinhood yesterday turned on its millions of users to not only shut down their ability to buy stock, they automatically began illegally selling their users’ stocks, too—a shocking criminal act joined by Discord shutting down its messaging platform—but was quickly met by these “hordes-of-millions” filing lawsuits—after which it was reported that Discord is no longer banning WallStreetBets and is helping them—that was followed by Robinhood receiving an emergency loan of $1-billion from its freaking out investors—and then saw Robinhood quickly reinstating its users ability to buy stocks so this war can continue to rage on.

A raging war that hilariously now sees Donald Trump Jr. and US Congresswoman Alexandria Ocasio Cortez being on the same side backing these “hordes” over Wall Street elites—while at the same time, the leftist mainstream media is branding these small investor Americans taking on Wall Street elites as an “alt right mob”—after which then saw leftist big tech giants swooping in to protect Biden’s backers on Wall Street, with Google Play deleting over 150,000 Robinhood app reviews after frustrated users justifiably gave it one-star ratings, and Facebook banning the Robinhood stock traders group with its over 150,000 members.

Supposedly protecting these small American investors against these Wall Street criminals are the US Treasury and the Security and Exchange Commission—a US Treasury now being run by Secretary Janet Yellen, who was paid over $800,000 by one of the Wall Street firms specifically being targeted by these small investors—while at the Security Exchange Commission, its new top enforcement officer just appointed by Biden is Melissa Hodgman, who is the wife of disgraced and fired former top FBI official Peter Strzok—and to whom they are really protecting, they are those like multi-billionaire Leon Cooperman, the Chairman and CEO of Omega Advisors—who is most infamously known as the “sad billionaire” for openly crying during an interview—and yesterday saw him attacking these small investors calling them “losers” because they are “sitting at home getting their checks from the government and trading their stocks”—then saw him shockingly screaming: “This fair share is a bullshit concept!...It’s just a way of attacking wealthy people”.

Though CEO Cooperman may have forgotten that Wall Street gets “their checks from the government”, too, one would think he’d be more wise in who he calls a “loser”—most particularly because of them having posted today at the WallStreetBets community the ominous warning: “I'm buying game stock, I don't care if I lose it all and I will continue to invest in companies being shorted by criminal hedge funds until they are all bankrupt”—a sentiment being shared by those gathered for the “Fuck Robinhood” protests that rocked the New York Stock Exchange yesterday—and for those Wall Street billionaire criminals hoping this nightmare ends soon, the world’s largest bank JPMorgan has just given them the bad news: “Expect much more pain”.  [Note: Some words and/or phrases appearing in quotes in this report are English language approximations of Russian words/phrases having no exact counterpart.] 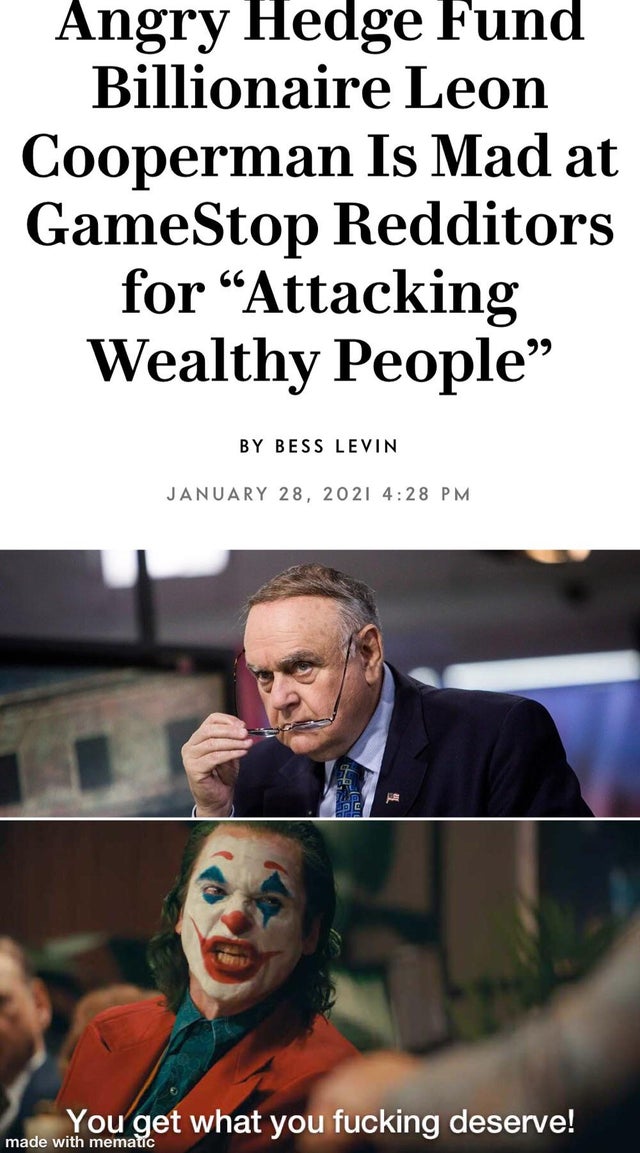 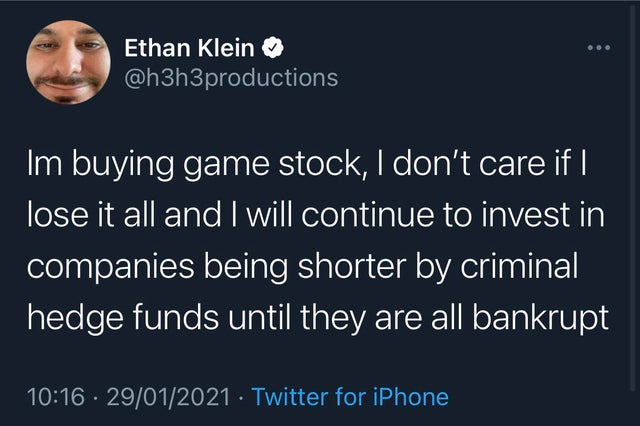 With new analysis showing that over half of socialist leader Biden’s social media followers are fake, yet even with them he has only 7% of President Trump’s followers, this report concludes, it explains why a permanent security fence is now being erected around the entire US Capitol building—specifically because regime protection actions such as this are always seen in police state nations whose tyrant rulers came to power by corruption and brute force—brute socialist force to now include the leftist big tech social media banning of all former President Trump officials so they can’t be heard—while at the same time these leftist big tech giants protect their socialist leaders, best exampled today by Facebook banning all ads being used in the recall effort against California Governor Gavin Newsome—though interestingly did see Facebook and the American Journal of Medicine quietly admitting yesterday that they were wrong to censor information about the coronavirus fighting drug hydroxychloroquine because all of the studies prove its effectiveness—though most critically for the American people living in the new socialist world they find themselves in, sees them in desperate need of reading and understanding such articles like “Newspeak In The 21st Century: How To Become A Model Citizen In The New Era Of Domestic Warfare”—wherein its best advice says: “It is imperative that an individual watch the 15 minute morning and evening “What to Hate” news”—and then explains why:

We have come to a point in time where the enemy is not some radicalized ideology, it is not some foreign despot, it is not even the threat of war (whether it be economic, cyber or nuclear), but rather it is ourselves.

We, the people, are the new enemies of the State. 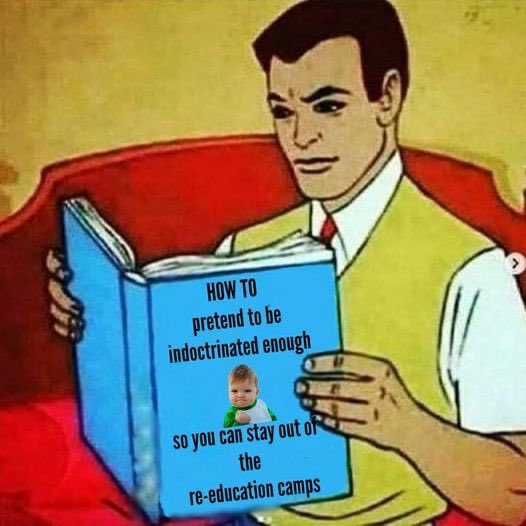 January 29, 2021 © EU and US all rights reserved. Permission to use this report in its entirety is granted under the condition it is linked to its original source at WhatDoesItMean.Com. Freebase content licensed under CC-BY and GFDL.