A mind-blowing new Security Council (SC) report circulating in the Kremlin today discussing a Ministry of Defense (MoD) war warning based on the Bulletin of the Atomic Scientists having recently assessed that India may have put the Communist Chinese capitol city of Beijing within the range of its nuclear weapons, says equally worrisome to note is the United States having just made this past week a strategic shift to the critical Pacific Ocean region by deploying its nuclear weapon capable F-35 fighter aircraft to a new air base facility hidden deep in the interior of Alaska—a war move made notable because the F-35 is feared to be the biggest electronic collection system ever devised—and are F-35 fighter-surveillance aircraft now positioned to defend the huge Pacific Exercise centered on Guam being conducted by naval forces of the United States, Japan and Australia—a massive naval force quickly assembled within hours of Australia joining the United States to declare that Communist China’s claim on the South China Sea does not comply with international law—that was immediately followed by Indonesia rushing 24 of its warships to fight back against Communist China’s claims on the South China Sea, too.

Rush to war moves against Communist China being led by the United States, one of whose reasons for is disturbingly outlined in a Foreign Intelligence Service (SVR) document that’s also being discussed in this report—a document that begins by noting that Communist China has 2,000,000 police officers, as opposed to the United States having just under 690,000—that are augmented by the estimated 1.5-million forces belonging to the People's Armed Police (PAP)—the political police forces of the Chinese Communist Party that SVR intelligence analysts assert are preparing to send 500,000 of them into the United States upon socialist Democrat Party candidate Joe Biden declaring that he’s won the 3 November presidential election.

And when confronted with it on live British television this past week, saw Communist Chinese Ambassador Liu Xiaoping saying it only showed “a normal transfer of prisoners”—a claim supported by official Communist Chinese news sources saying that “the Western media is being malicious”—neither of which, though, explains why many of these People’s Armed Police were wearing English language “SWAT” markings on their uniforms, or why they were even giving commands in English.  [Note: Some words and/or phrases appearing in quotes in this report are English language approximations of Russian words/phrases having no exact counterpart.] 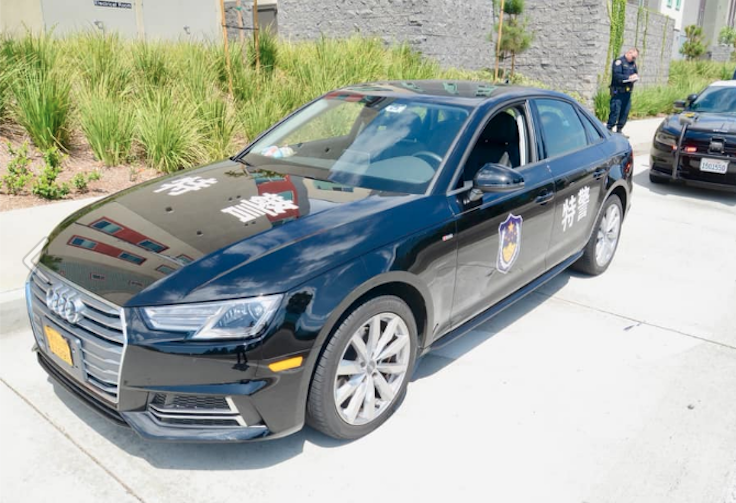 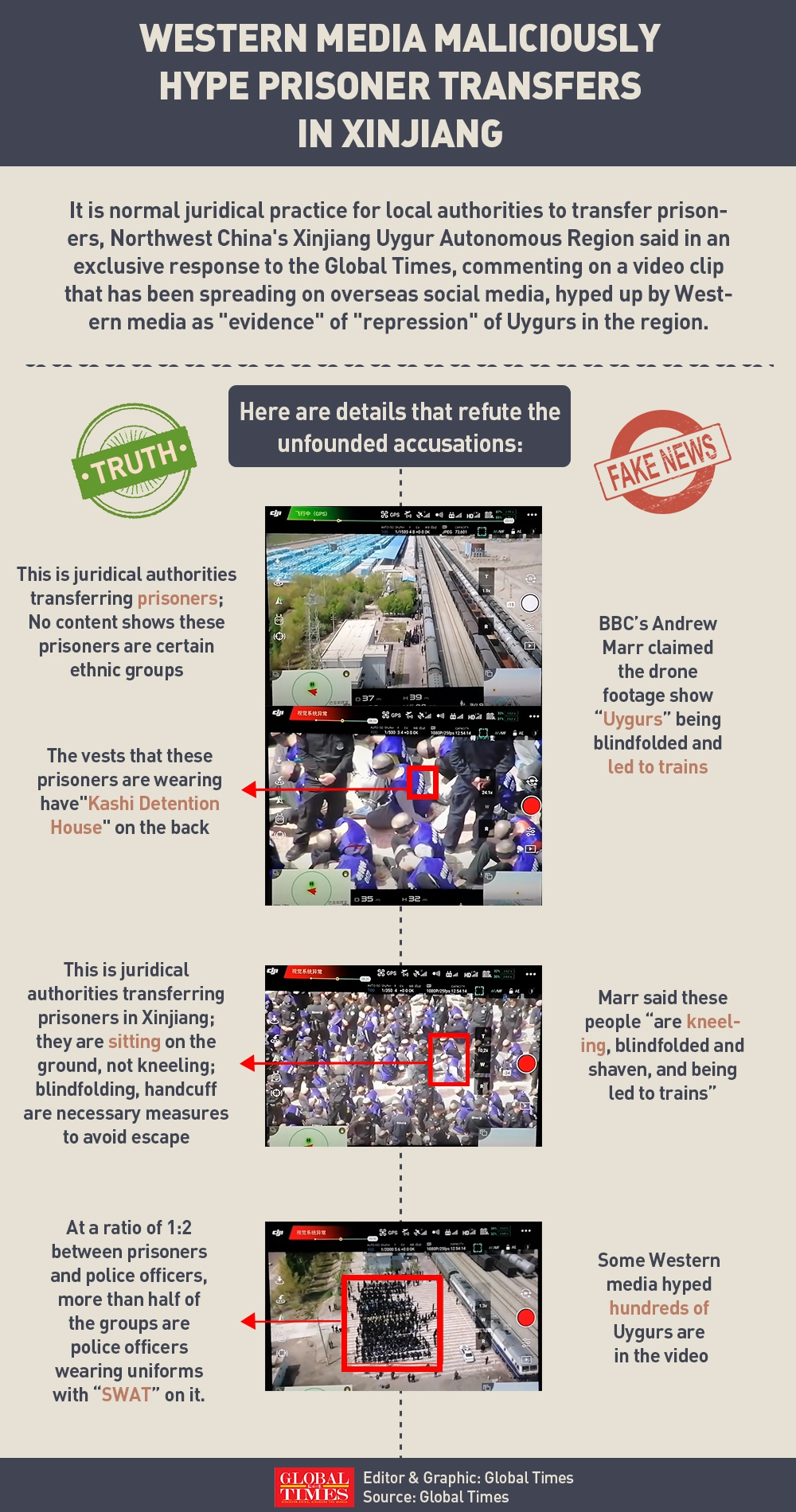 According to this report, in the American article published this week titled “Why This Election Could Be The Most Important Since The US Civil War”, aside from its stating that “this election is undoubtedly the most important one since 1860….the outcome of that was the War Between the States”, it grimly warned that “the election will be contested no matter which side wins because the country has become totally polarized…no matter who wins, the other side is going to be terminally unhappy with the result”—a warning being supported by the likes of socialist Democrat Party leader US Congresswoman Maxine Waters, who maniacally this week told her radical followers that President Trump’s sending federal police forces to protect lives and properties from mob violence was all a plot—a “plot” she exposed by stating: “This is what you see in countries where you have dictators…In third-world countries with dictators who have paramilitary that they can call up anytime they want…As a matter of fact, it has been suggested that this is a trial run of the president of the United States who may be organizing to not accept what happens when we have the election if he’s not elected…Is he going to pull out his military?...Is he going to engage us?...He has already alluded to there may be a civil war if he’s not re-elected”.

Now jumping into this looming cataclysm called the 3 November presidential election to make it even more absurd, this report notes, is the Office of the Director of National Intelligence (ODNI), who this past week issued a comical warning about foreign interference in this election—a warning, however, that fails to explain how any foreign nation could possibly harm an election process more than the Americans do to themselves—best exampled in the 2016 presidential election that saw the Obama-Clinton Regime and their intelligence agencies illegally interfering in it so much, US Attorney General William Barr was forced to call what they were doing “a coup attempt”.

Most bizarre about this American presidential election, this report details, is that its main socialist Democrat Party candidate Joe Biden has devised a campaign strategy that has increasingly focused on blaming Trump for disease, depression, and racial unrest—none of which Trump is responsible for—and today sees this Biden campaign strategy having made the entire socialist Democrat Party the party of disease, depression, and racial violence in order to aggravate all three crises—with it being noted that the real danger for these socialist Democrats is that this could backfire—and most certainly backfired this past week with the hugely popular American black radio personality Charlamagne Tha God, who after hearing Biden call Trump “the first racist president”, reminded Biden that America has had actual slave owning presidents—thus earning Biden the dubious “Donkey of the Day” award from Charlamagne, who further told Biden to “Shut The Eff Up Forever”.

Watching as this slow moving train wreck of an election draws ever closer by the day, this report continues, is noted leftist Hollywood filmmaker Michael Moore—who in 2016 warned his fellow socialist Democrat Party comrades that Trump was going to win if they weren’t careful—and who is now warning “I want to caution everyone, do not underestimate the evil genius that is Donald J. Trump”—a warning joined by Moore stating the facts that: “Trump has lost none of his base and they are more rabid than ever…Sleeping on the sidewalk for five nights just to get in to see Trump?...THAT is commitment…Do not take Trump for granted…Don’t think he can’t win…Don’t get all cocky telling everyone there’s no way he’s winning the White House because, frankly, you sound a lot like yourself four years ago when you told everyone there’s no way this country is going to put a clown in the Oval Office”—true facts stated by Moore that he followed by saying: “If you are once again not taking my warnings seriously, then I have a question I want you to answer, and I ask you to answer me honestly…How many people would line up for five days just to hear Joe Biden talk?...12?...5?...None?...The candidate who inspires the most people in the swing states to excitedly get to the polls — and ensure that each of them bring 10-20 of their friends and family with them on Election Day — all of them highly-motivated, fired-up and on a mission from God — THAT’S who wins the White House”.

Soon to confront these “fired-up” American citizens “on a mission from God” as they prepare to vote in what is being called the most important presidential election of their lifetime, however, this report points out, is the grave warning just issued in the article “8 Big Reasons Election Day 2020 Could Be a Disaster” that says: “You may think you know how bad Nov. 3 will be…But all signs point to something far, far worse”—and wherein it methodically lists the disasters for this election just waiting to happen, no one has really prepared for, and could even end up with both Trump and Biden each declaring that they’ve won. 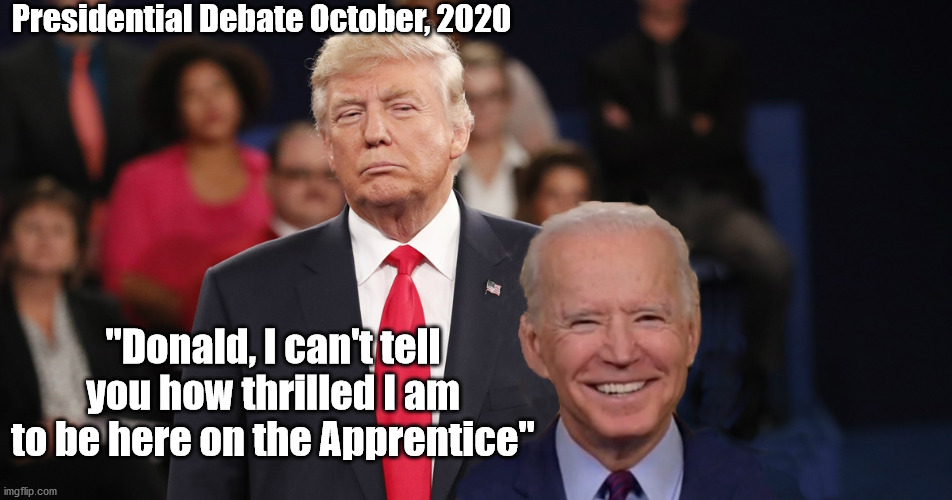 The current strategic assessment by Russian Federation military and intelligence analysts of what the socialist Democrat Party is doing, this report concludes, is that no matter if President Trump wins the 3 November election in a landslide, Joe Biden will be declared the winner by socialist-globalist forces the world over—a scenario that will see Biden and his socialist forces fleeing to the socialist iron grip controlled Democrat Party regions on the American west coast—which Biden will declare is the new temporary seat of the American government—after which this “new” government will appeal for international recognition as being the legitimate government of the United States, as they’ll claim that President Trump was only able to win by cheating—that Communist China will immediately recognize and offer to support with its People's Armed Police forces, thousands of whom will already be pre-positioned in North America—a scenario that no one knows which side the American military will support—but whose “wild card” in this geopolitical poker game for control of America is the largest standing army the world has ever seen—and are the over 100-million gun owners in America standing solidly behind President Trump—all of whom keep buying in historic record numbers even more weapons. 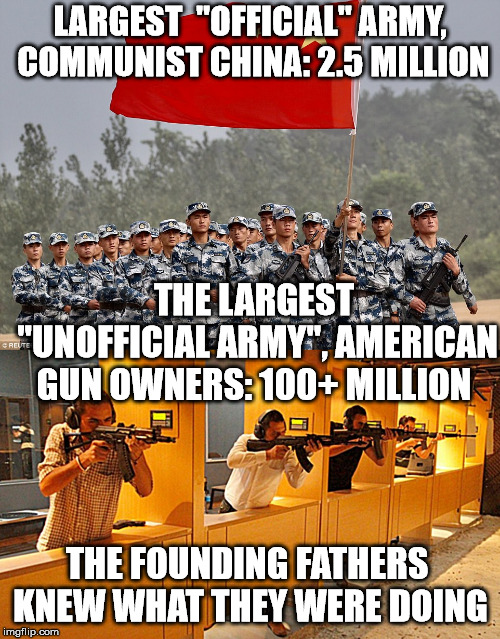 July 25, 2020 © EU and US all rights reserved. Permission to use this report in its entirety is granted under the condition it is linked  to its original source at WhatDoesItMean.Com. Freebase content licensed under CC-BY and GFDL.