A mind-bending highly-classified “Of Special Importance” new Foreign Intelligence Service (SVR) report circulating in the Kremlin today continuing to document the recent activities of an elite team of Special Activities Center (SAC) commando-assassins from the Central Intelligence Agency (CIA) responsible only to President Donald Trump, CIA Director Gina Haspel and Deputy Director of CIA for Operations Elizabeth Kimber, says most critical to be noticed about events occurring in the United States yesterday was Nigerian international criminal Raymond “Hushpuppi” Abbas being denied bail by a US Federal Court in Chicago-Illinois, that was followed an hour later by child sex slaver Ghislaine Maxwell being denied bail by a US Federal Court in New York City—the significance of which was revealed during the New York City bail hearing when US prosecutors read in open court to a sobbing Ghislaine Maxwell a statement written by one of her Jane Doe child sex victims that chillingly said “She was in charge…She egged him on”.

A statement confirming that US prosecutors know the truth that Ghislaine Maxwell was using Jeffery Epstein as part of her MOSSAD operation to entrap and blackmail high-level persons—one of the highest being Ghislaine Maxwell’s known secret lover former President Bill Clinton—and further proves that these US prosecutors are fast on the trail of “an international political, economic and financial cartel that branches from Nigeria to the United States via Lebanon, Dubai, the Netherlands and Italy”—one of whose suspected cartel members was Fahim Saleh—a high-tech multi-millionaire living in New York City owning numerous companies around the globe, one of which is the Nigerian ride sharing service Gokada that was shut down in February—a Nigerian company INTERPOL suspected was funneling money to Raymond “Hushpuppi” Abbas in Dubai, who then further funneled this money to close Hillary Clinton associate Gilbert Chagoury—who himself is the powerful Lebanese-born Nigerian multi-billionaire that kept then Secretary of State Hillary Clinton from designating Boca Harem as an international Islamic terrorist organization—but all of whose cartel members are now trembling in fear after the SVR tracked these CIA commando assassins to New York City this past week—where yesterday it was reported that a man in a suit with a mask was observed getting into an elevator with Fahim Saleh—after which the decapitated and dismembered body of Fahim Saleh was discovered in what the New York City Police have declared was a professional killing.  [Note: Some words and/or phrases appearing in quotes in this report are English language approximations of Russian words/phrases having no exact counterpart.] 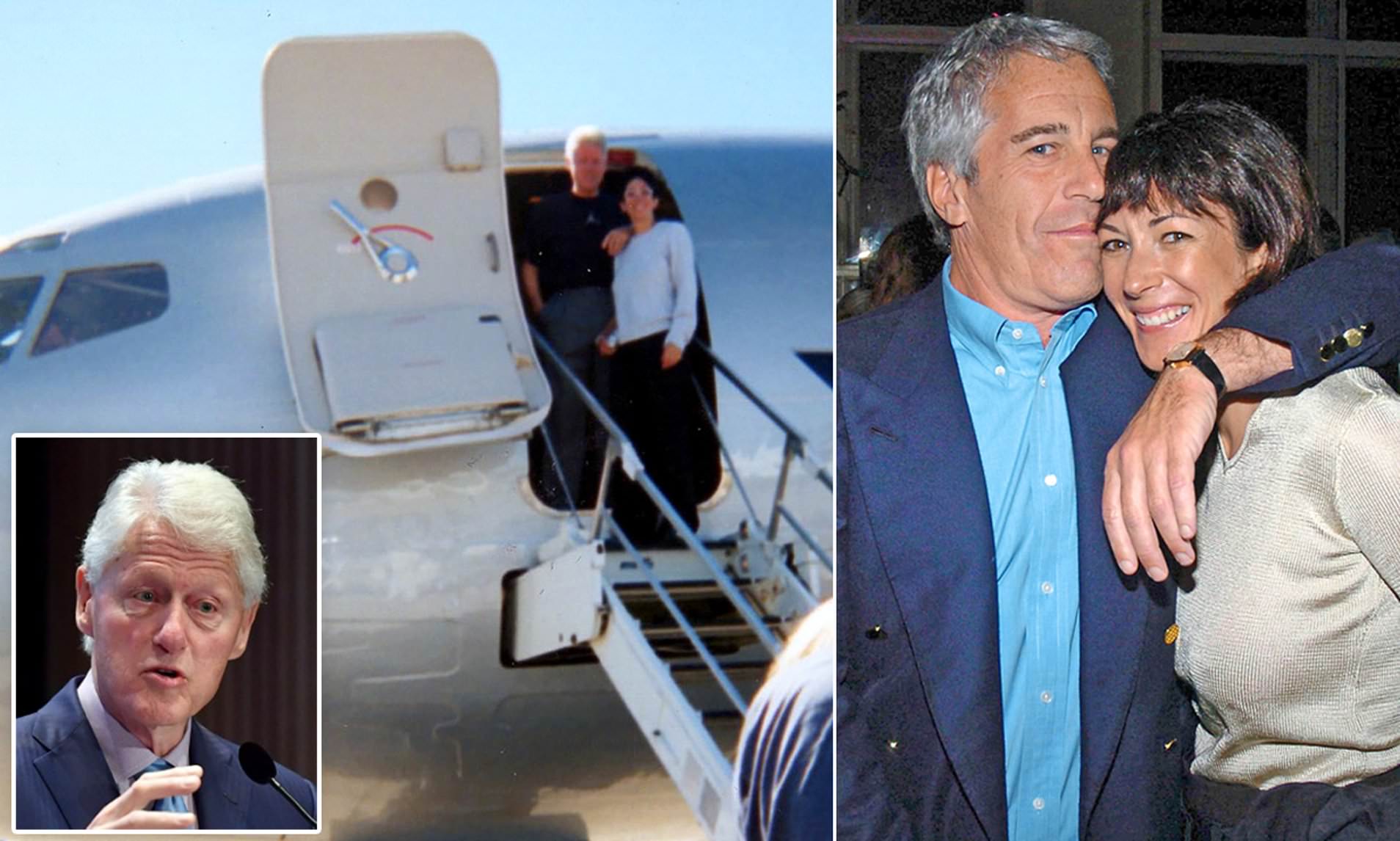 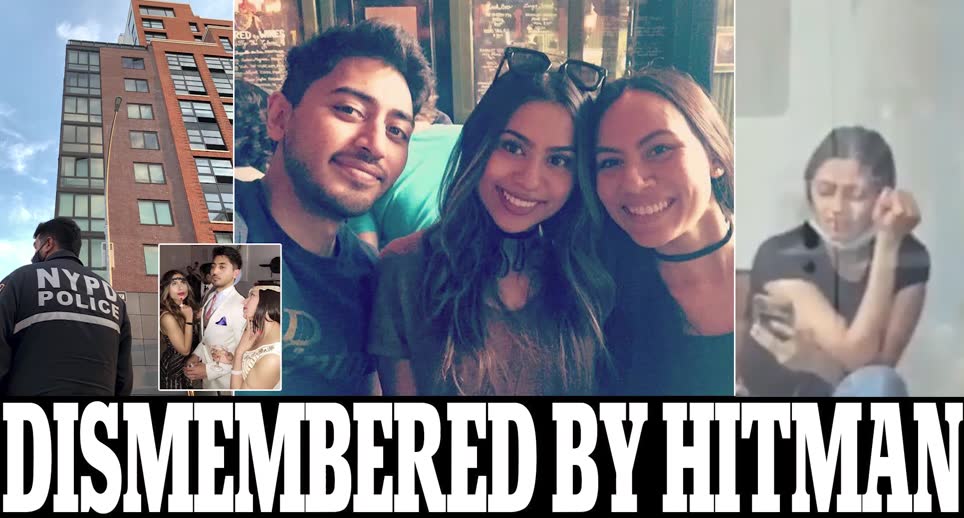 According to the very limited portions of this highly-classified report permitted to be commented on by various ministries, one of the greatest unsolved mysteries involving the socialist Obama-Clinton Regime had its beginning in April-2014—which was when the Islamic terrorist organization named Boko Haram shocked the world when they kidnapped 276 schoolgirls in Nigeria to use and sell as sex slaves—and when written about saw it being noted:  “Under the Clinton State Department, influence from big money donors appeared to thwart efforts to combat Boko Haram—efforts that might have saved thousands of lives…Five years and many Freedom of Information Act filings later—including four filed by WORLD—no clear explanation exists for Clinton’s refusal to designate a terror group a terror group during her tenure as secretary of state….Further, given the controversy that’s unfolded over her decision, the State Department appears determined not to divulge documents pertaining to that decision—and some documents may be lost to Clinton’s now infamous in-home server”—and it further being revealed that: “Clinton's ties to Gilbert Chagoury, a prominent Nigerian businessman and Clinton Foundation supporter, have prompted at least one member of Congress to question the motives behind her decision not to slap Boko Haram with a Foreign Terrorist Organization classification”.

Most concerning to the SVR, though, this report details, were the close ties held between Gilbert Chagoury, Secretary Hillary Clinton, former President Bill Clinton and the Islamic terrorist organization Hezbollah—as well as the close ties between Israel and Nigeria—concerns that grew into alarm when it was discovered that MOSSAD was operating torture centers in Nigeria—a shocking discovery that led to an investigation being opened the International Criminal Police Organization (INTERPOL)—and when opened, then saw Nigerian criminal money laundering mastermind Raymond “Hushpuppi” Abbas fleeing to Dubai—after which then saw Dubai joining with other Gulf State monarchies to pour tens-of-millions of dollars into the Clinton Foundation. 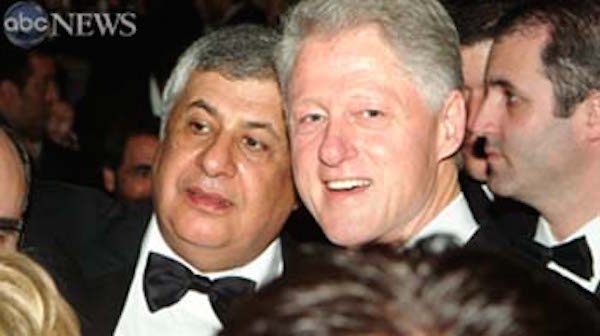 Nigerian multi-billionaire Gilbert Chagoury (above with former President Bill Clinton) openly bragged about his ability to influence US policy.

As to why Secretary of State Hillary Clinton refused to designate Boko Haram as a terrorist organization, this report continues, the SVR concluded was because Secretary Clinton was blackmailed not to do so by Ghislaine Maxwell and her Jeffrey Epstein child sex “honey trap” operation—a blackmail threat conveyed to Secretary Clinton by her close associate Nigerian multi-billionaire Gilbert Chagoury—that gained Secretary Clinton tens-of-millions of dollars to her own money laundering scheme called the Clinton Foundation—and whose beyond shocking reason for was because Israel was supplying Boko Haram with weapons—that under international law made Israel complicit in kidnapping of 276 school girls in Nigeria. 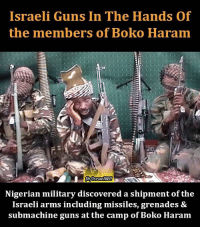 With the 10 August 2019 assassination of child sex slaver Jeffrey Epstein still stinging both President Trump and feared CIA Director Gina Haspel, this report continues, the COVID-19 global pandemic gave them an unexpected opportunity to take another try to bring down what’s described as this “international political, economic and financial cartel that branches from Nigeria to the United States via Lebanon, Dubai, the Netherlands and Italy”—an opportunity because Israel suddenly found hundreds of its citizens trapped in Africa with no way to get home—but thanks to the intervention of President Trump, saw the historic first direct flight from Nigeria to Israel being made on 30 March to bring these trapped citizens back home.

Though the details of the deal made by President Trump with both Israel and Nigeria known by the SVR is not permitted to be openly commented on, this report does note some of what occurred in its aftermath—most notable of which occurred on 10 June when INTERPOL forces in Dubai captured Nigerian criminal money launderer Raymond “Hushpuppi” Abbas (Dubai officials now claim credit for the capture)—a capture followed on 25 June when Nigerian criminals began sending out emails asking of help to access money hidden by Jeffrey Epstein—that was followed on 29 June when the US became the first nation to publically announce that Raymond “Hushpuppi” Abbas had been captured—that was followed on 2 July when the US announced it had captured Ghislaine Maxwell—that was followed on 3 July when the US announced that Raymond “Hushpuppi” Abbas had landed in America and was formally arrested and charged—and most critically to notice was followed on 12 July with INTERPOL announcing it had captured an additional three more Nigerian money launderers belonging to this international cartel—critical to notice because it’s an obvious sign that Raymond “Hushpuppi” Abbas is “singing like a bird” to US prosecutors and is giving up everyone he can—which makes it more than understandable why the “message murder” of Fahim Saleh was sent out yesterday. 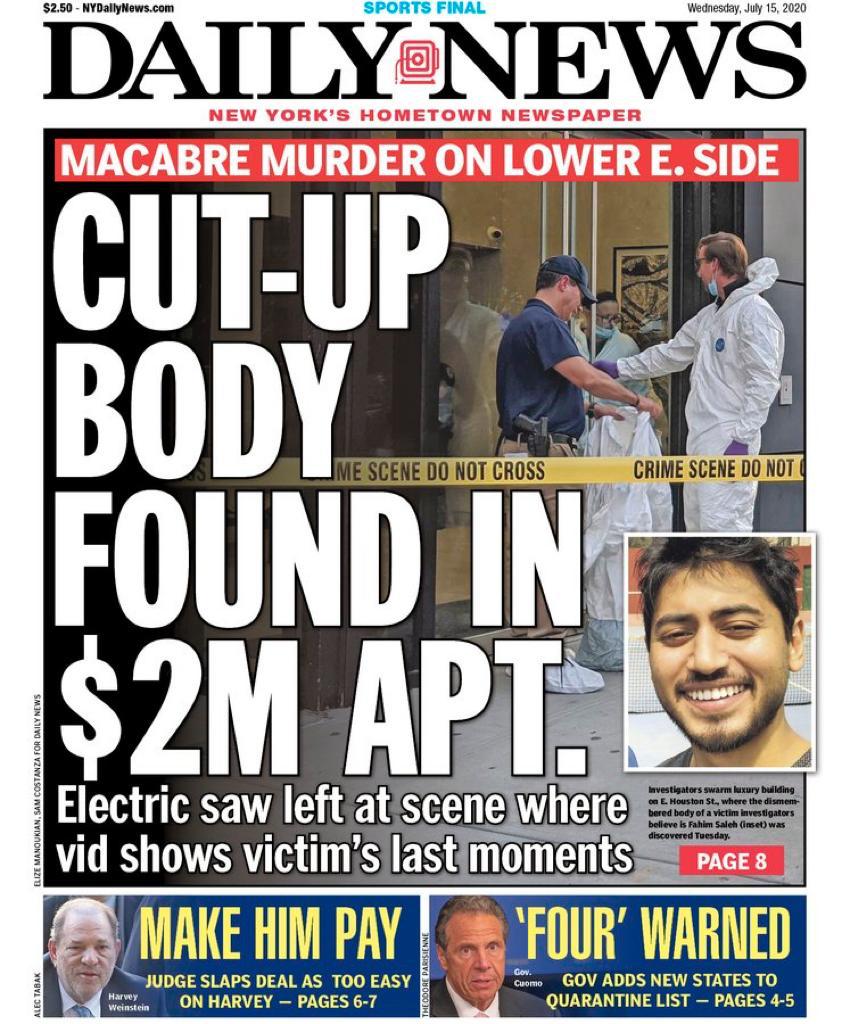 Most curious about the American people to notice as these elite CIA commando assassins protecting President Trump continue racking up their body count of “message murders”, this report concludes, is how many of them fail to understand that what’s happening isn’t at all unusual, in fact it’s the normal way such things like this are done in the United States—where for nearly two centuries, political murder assassinations, even of Presidents, are as predictable as they are commonplace—and all of whom would be well advised to heed the warning words of what their nation is really all about fearfully uttered by President Woodrow Wilson, who said:

Since I entered politics, I have chiefly had men's views confided to me privately.

Some of the biggest men in the , in the field of commerce and manufacture, are afraid of something.

They know that there is a power somewhere so organized, so subtle, so watchful, so interlocked, so complete, so pervasive, that they better not speak above their breath when they speak in condemnation of it. 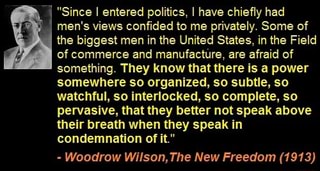 July 15, 2020 © EU and US all rights reserved. Permission to use this report in its entirety is granted under the condition it is linked  to its original source at WhatDoesItMean.Com. Freebase content licensed under CC-BY and GFDL.