An informative new Security Council (SC) report circulating in the Kremlin today discussing the latest battle moves being undertaken in the rapidly turning more dangerous “Coronavirus Pandemic War”, notes President Putin assuring Security Council Members at this morning’s teleconference briefing that Russia has enough reserves to protect its people amid this coronavirus pandemic—a needed assurance coming as coronavirus riots and food shortages sweep an African Continent being described as “It’s War Out Here”—and because of the even more globally significant events that are occurring in the United States—a country where this pandemic has exposed the motives of their nation’s self-appointed globalist-socialist political leaders and leftist mainstream propaganda media radicals who are all pushing anti-American policies to give themselves more power—most particularly their slamming the American people with tyrannical coronavirus shut downs and regulations having nothing to do with safety and everything to do with these peoples’ freedoms—and while being led by the maniacally-leftist New York Times, now sees these tyrannical socialist forces viciously attacking President Donald Trump because he won’t become the dictator they demand he should be—a President Trump who, in fact, has become the opposite of a dictator and posted messages to his under socialist siege citizens telling them to “Liberate Virginia!”, “Liberate Michigan!” and “Liberate Minnesota!”.

Messages of liberation the American people are responding to by the tens-of-thousands as they rise in protest against their socialist overlords, and, also, sees this nation’s college students preparing to launch a peaceful rebellion against socialist mandated stay-at-home orders—actions of liberation, though, these socialist tyrants are warning shows “Trump is playing with fire”, has them saying “Trump is fomenting domestic rebellion”, and sees the leftist New York Times even more dementedly screaming “Trump Is Asking Us to Play Russian Roulette With Our Lives”.

But in all reality are calls for liberation from socialist tyranny being made by President Trump fully in line with the United States Constitution he swore an oath to defend with his life that outlaws the trampling on the rights of the American people for any reason—thus making it understandable why President Trump’s top intelligence official Richard Grenell posted an image of the US Constitution with the caption “Signed Permission Slip To Leave Your House”—and why President Trump appointed US Federal District Judge John Broomes had to slap down the socialist Democrat Party leader Governor Laura Kelly of Kansas when this tyrant tried to keep her Christian citizens from going to church because of the coronavirus.  [Note: Some words and/or phrases appearing in quotes in this report are English language approximations of Russian words/phrases having no exact counterpart.] 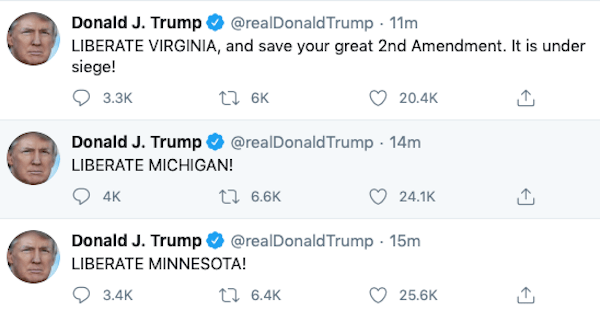 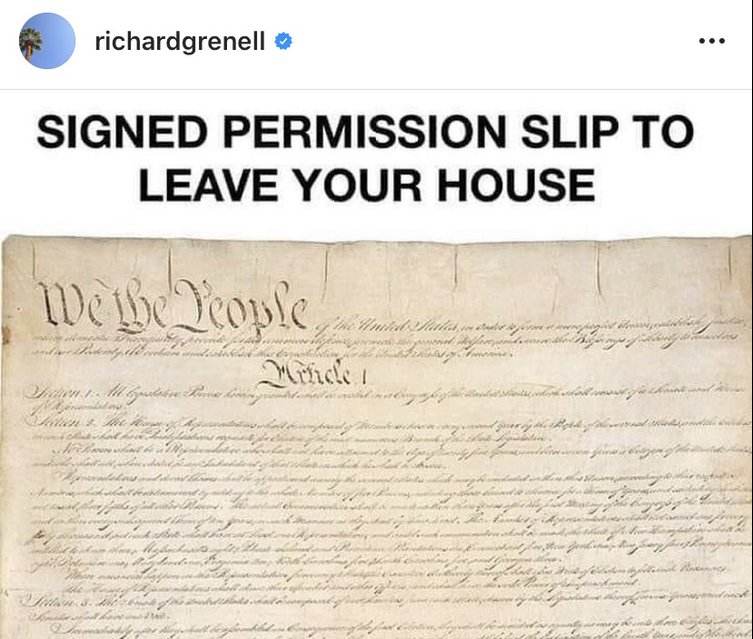 President Donald Trump and acting Director of National Intelligence Richard Grenell are under vicious socialist attack because they told the American people to start acting like the American citizens they actually are.

According to this report—and as fearfully documented yesterday—the entire battlefield landscape of this “Coronavirus Pandemic War” was unalterably changed after Nobel Prize winning French virologist Doctor-Scientist Luc Montagnier, who discovered the HIV virus back in 1983, and currently works as a full-time professor at Shanghai Jiao Tong University in China, affirmatively declared that the coronavirus rampaging across the world killing tens-of-thousands of innocent peoples: “Could Only Have Been Created In A Lab”—thus assuring that whoever created this coronavirus as a bioweapon, will receive a crushing Russian military response for doing so.

In knowing Russia’s full determination to militarily respond with full-force, even to nuclear weapon use, against the perpetrators of this crime against humanity, this report notes, both the United States and Communist China are now furiously pointing fingers at each other assigning blame—with President Trump stating that he has a very good relationship with Russia and does not see any increase in military tensions—while at the same time the US has launched a full-scale investigation into the Wuhan-China bio-lab this coronavirus came from—the results of which when determined, now sees President Trump warning of “consequences” if Communist China was “knowingly responsible” for this coronavirus pandemic outbreak.

A grave warning issued by President Trump, this report details, coming at the same time Communist China is claming that the coronavirus was brought into their country by American US Army athletes who visited Wuhan in October-2019—a claim Communist China is today spreading throughout the entire Arab world in their blaming America for having created the coronavirus as a bioweapon—and to such effect, the coronavirus hard-hit Chinese allied nation of Iran, a few hours ago, warned that it’s preparing to go to war with the United States. 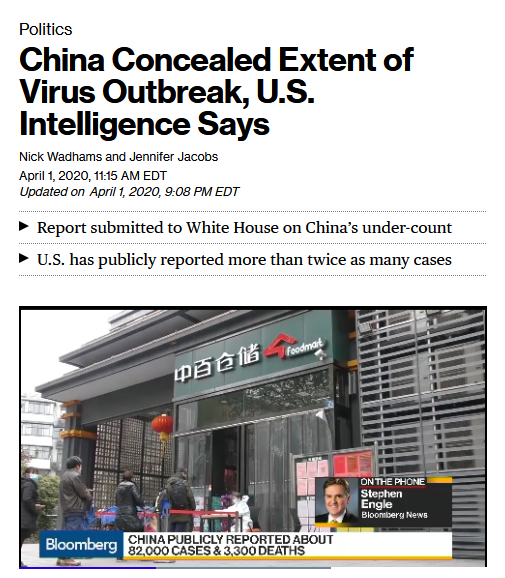 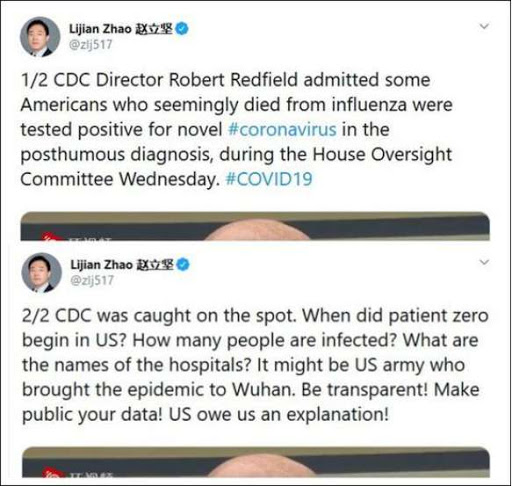 and Communist blame each other for starting the coronavirus pandemic

As to the absolutely worse scenario mounting evidence is growing to support about whom is really behind this global coronavirus pandemic, this report concludes, shows the strong likelihood of its being masterminded by a hard core radical cadre of globalist-socialist forces embedded within both the United States and Communist China acting without either the knowledge or authorization of either President Trump or President Xi—both of whom are fully aware of President Putin’s preparations to retaliate against the perpetrators of this crime against humanity—and in China’s case would see President Xi ruthlessly rooting out these demonic forces and “disappearing” them—and with President Trump, explains why he has just leaked that arrests of top socialist plotters in the US are coming as soon as this week—all of which are stark facts and reality available to any sane and normal mind wanting to have understanding of what is truly occurring—which surprisingly includes top American leftist Bill Maher, who has just launched a withering attack against the socialist-aligned US mainstream propaganda media warning them that their vile “panic porn” coronavirus hysteria is doing nothing but insuring President Trump will be reelected—and not surprisingly the independent peoples of Switzerland, who last evening lit up their world famous Matterhorn Peak in the Swiss Alps with a full-colour American Flag to show their support for President Trump and his nation’s peoples. 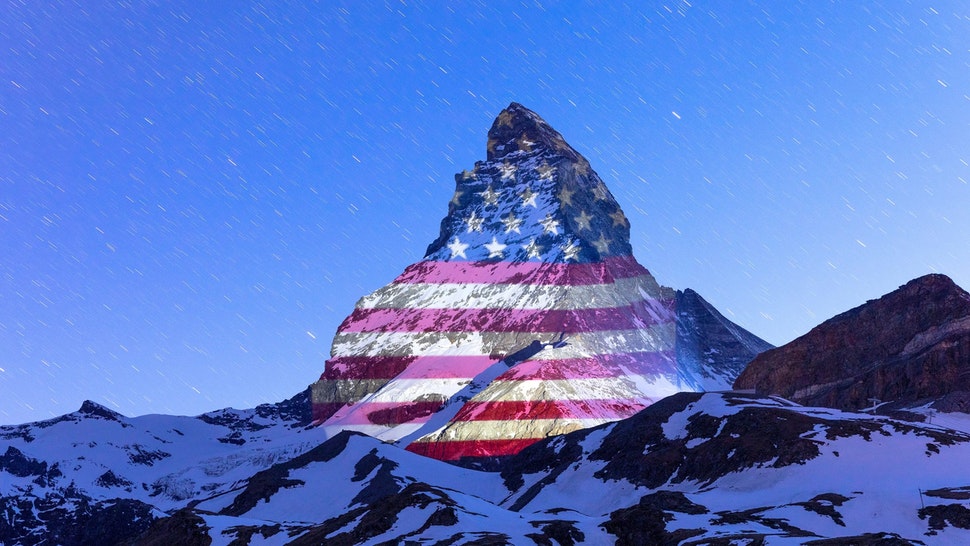 April 19, 2020 © EU and US all rights reserved. Permission to use this report in its entirety is granted under the condition it is linked  to its original source at WhatDoesItMean.Com. Freebase content licensed under CC-BY and GFDL.