Satellite Explodes—US Blames , Calls For War With , And Abruptly Orders Nuclear Bombers Back To

An actually terrifying new Security Council (SC) report circulating in the Kremlin today discussing highly-classified “Of Special Importance” events occurring in the “Coronavirus Pandemic War” pertaining to this week’s Ministry of Defense (MoD) national security preparations utilizing Aerospace Defense Forces, states that the numerous NOTAMS (Notice To Airmen) being issued to Western military forces by the Russian Federation are in direct response to increasingly hostile actions being displayed by the United States—hostile actions that started on 11 April when the MoD issued a NOTAM warning of “Hazardous Operations, Rocket Launching” in the splashdown area in the Laptev Sea—a NOTAM warning issued in preparation for the successful 15 April testing of the PL-19 Nudol anti-ballistic missile interceptor that also functions as an anti-satellite weapon—an 15 April successful testing of the PL-19 Nudol missile system, however, that exactly coincided with an as yet unidentified satellite exploding in space, its falling slowly in flames through the atmosphere, and then crashing somewhere in the United Kingdom—and upon crashing, saw US Space Command US Air Force General John Raymond screaming to Russia: “This test is further proof of Russia's hypocritical advocacy of outer space arms control proposals designed to restrict the capabilities of the United States while clearly having no intention of halting their counterspace weapons programs”—which Russia immediately replied to by pointing out that Moscow is still waiting for Washington to answer its questions about US activities in outer space and stating: “We also have a lot of questions…We asked them quite a long time ago and want to have an answer after all”—that itself was followed within the hour by known President Donald Trump “media mouthpiece” Lou Dobbs of Fox News floating the idea of war with Communist China as a “consequence” for the coronavirus—and immediately upon its floating, saw President Trump ordering the US Air Force to abruptly end its continuous nuclear bomber presence on Guam after 16-years and immediately return all of its B-52s back to America. [Note: Some words and/or phrases appearing in quotes in this report are English language approximations of Russian words/phrases having no exact counterpart.] 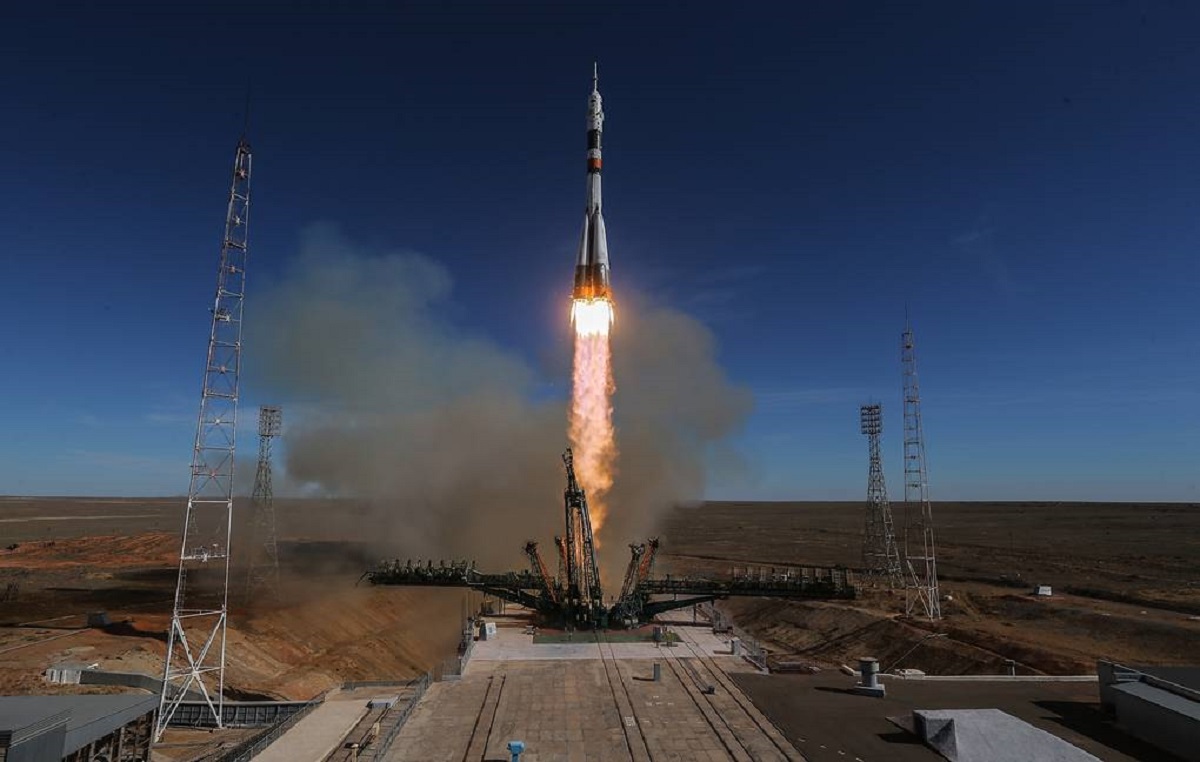 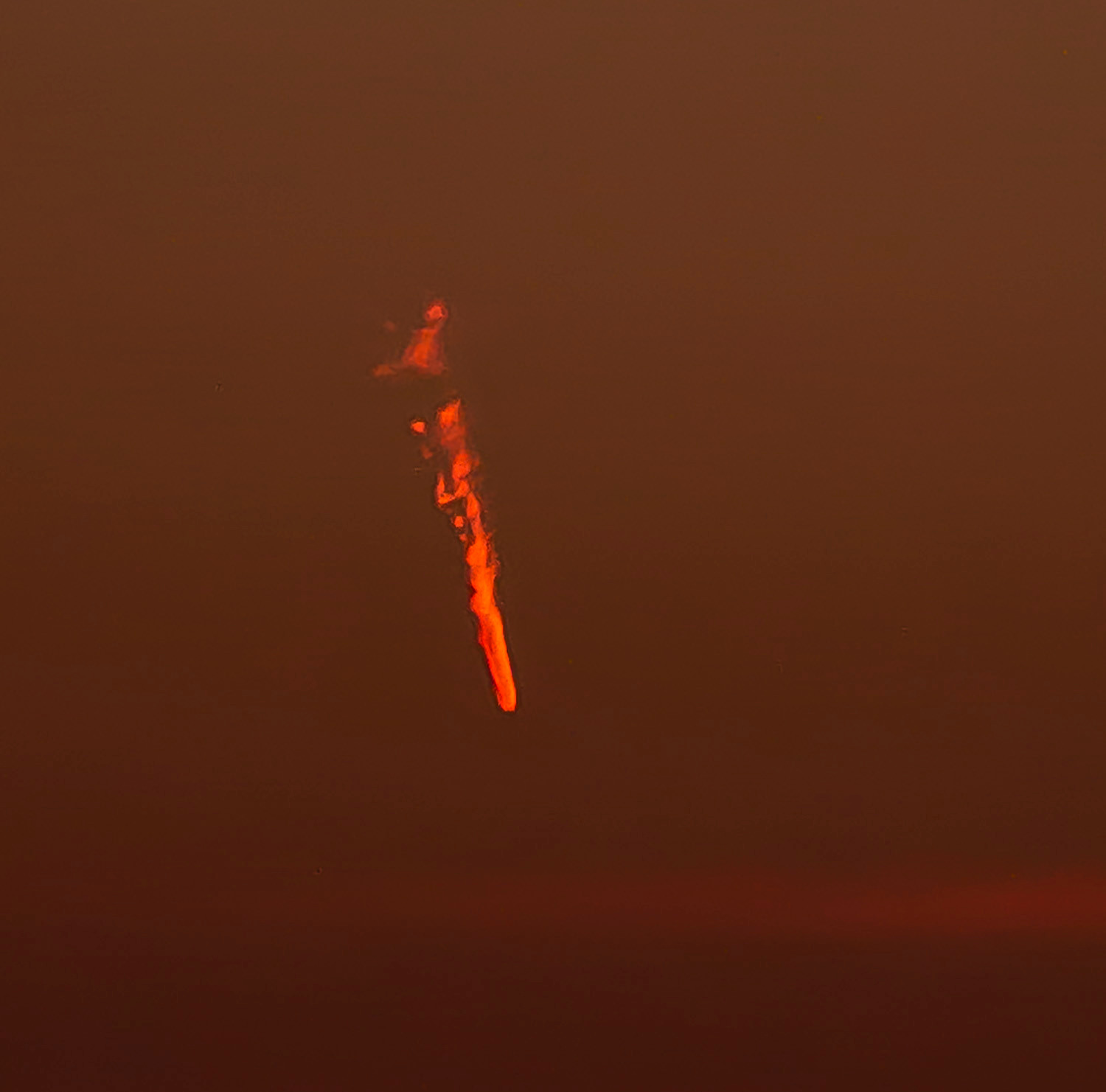 …and after launching unidentified satellite explodes in space (above)… 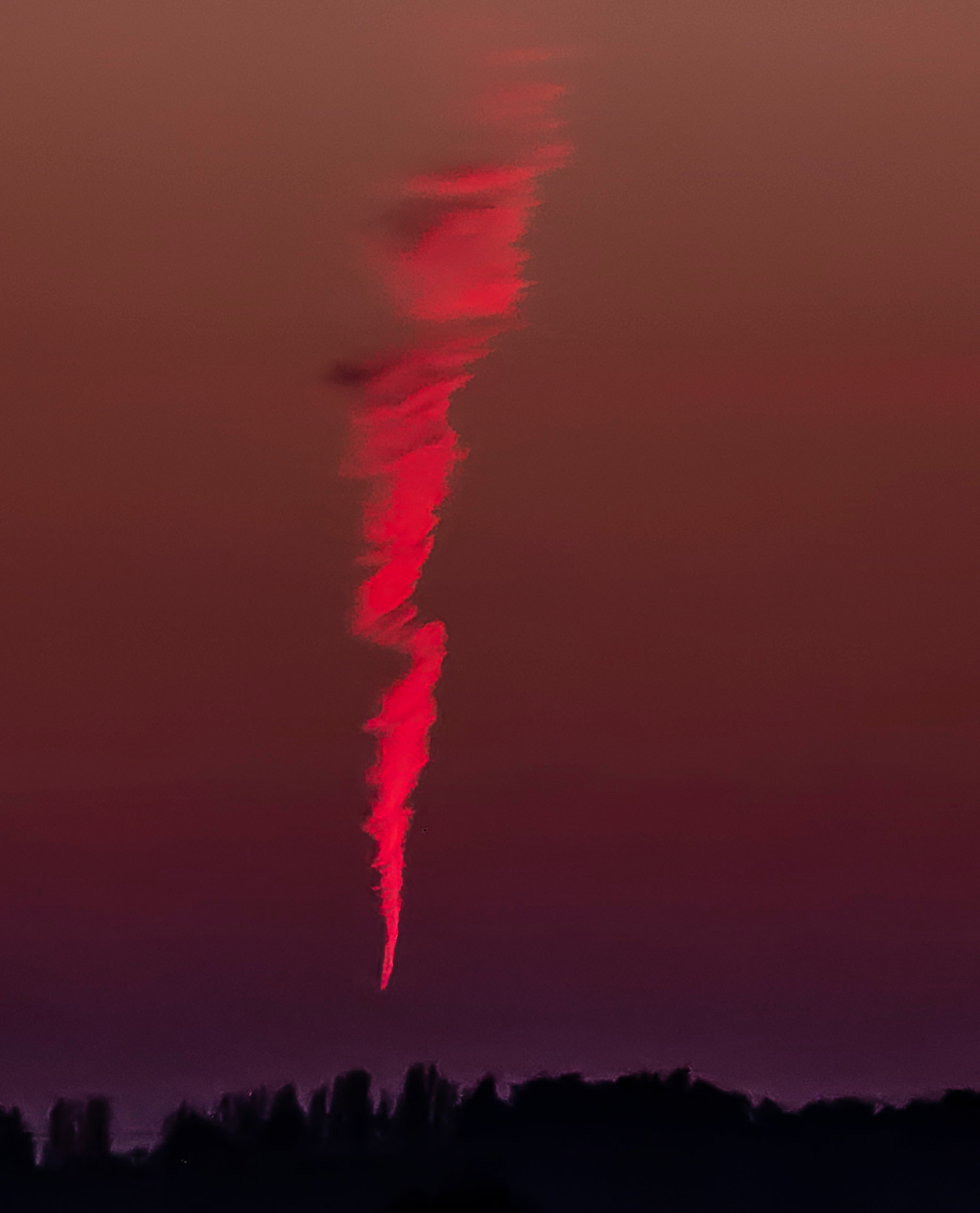 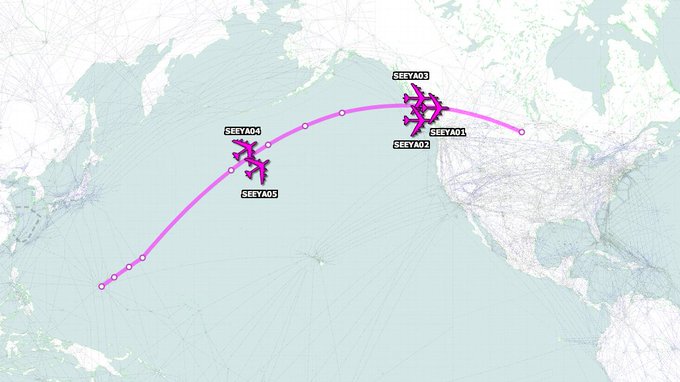 …all followed by war against China because of the coronavirus being floated in the US and President Donald Trump ordering his nation’s nuclear armed B-52 strategic bombers to immediately leave their Pacific Ocean island base in striking distance of Communist Chinese missiles—B-52 strategic bombers that once safely out of range of being targeted while they fled back to America, suddenly turned on their SQUAK-Transponders to mysteriously identify themselves to the world’s watching radar systems as “SEEYA” (above)—which brings to mind the American idiom: “We’ll be seeing you later”.

According to the very limited, indeed near non-existent information contained in this classified at the highest level report permitted to be openly commented on by various ministries, what appears to be the main focus of Russian leadership concern right now is the “United States bigger biological presence beyond its borders, in particular in former Soviet republics”—with this report specifically mentioning Foreign Ministry Spokeswoman Maria Zakharova stating yesterday: “Naturally, we cannot ignore the fact that the Americans are developing an infrastructure with hazardous biological potential in the direct proximity to the Russian borders, and we cannot rule out that the Americans use such reference laboratories in third countries to develop and modify various pathogenic agents, including in military purposes”.

Taken just by itself this statement just made by Foreign Ministry Spokeswoman Zakharova could have multiple meanings—but when viewed in the context of this report’s numerously referenced sub-files, sees something truly ominous emerging—sub-files containing an MoD document describing a clandestine biological weapons laboratory in the country of Georgia being operated by the US military—and a frightening sub-file documenting events that occurred in the former Soviet republic of Kyrgyzstan—a Kyrgyzstan that was once part of the old Soviet biological-warfare network, and where the NATO nation of Canada planned to build a high-security bio-lab holding the world’s most deadly pathogens opponents dubbed the “laboratory of death”—a project that fell under the Canadian government’s $1-billion Global Partnership Program, itself part of a wider G8 effort to help prevent nuclear, biological and chemical agents in former Soviet lands from getting into the wrong hands. 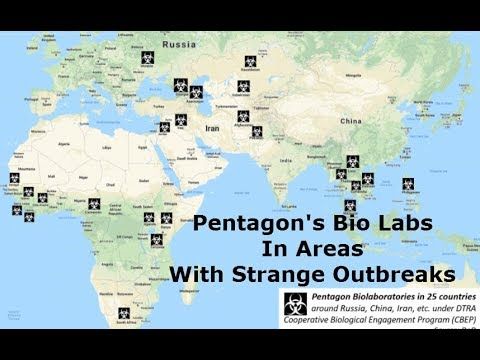 Though NATO member Canada was never able to finish its “laboratory of death” in Kyrgyzstan due to that nation’s 2010 revolution, this report documents how the Obama-Clinton Regime used US defense monies to fund and build its Republican Center of Quarantine and Especially Dangerous Infections (RCQ&EDI MH KR)—a research center for the world’s most deadliest pathogens in Kyrgyzstan still fully funded by the World Health Organization—and MoD alarms were sounded about in March-2018 when the United States military pulled out of Kyrgyzstan.

Further MoD alarms about Kyrgyzstan were sounded in April-2019 when they joined the Belt and Road Initiative to connect themselves with southern China, which borders their nation—an initiative enacted by Communist China in 2013 so they could gain supremacy in global trade—but five-months after Kyrgyzstan had linked up with southern China, in October-2019—this report all but admits the MoD threatened to attack Armenia unless it opened up to Russian military scientists its US military bio-lab—a threat Armenia bowed to and saw them preparing to sign an inspection agreement with the MoD on 25 October 2019.

In piecing together why Russia was prepared to go to war with Armenia unless they opened up to MoD scientists the US military bio-lab in their country, this report references what had occurred the month previously in September-2019—which was when the MoD began to document troubling reports coming out of southern China near the border with its new Belt and Road Initiative partner Kyrgyzstan about a mysterious disease that was killing people—with confirmation of this being true having just been publically released by a team of researchers led by a Cambridge University that have traced the coronavirus to have first emerged in southern China—not Wuhan. 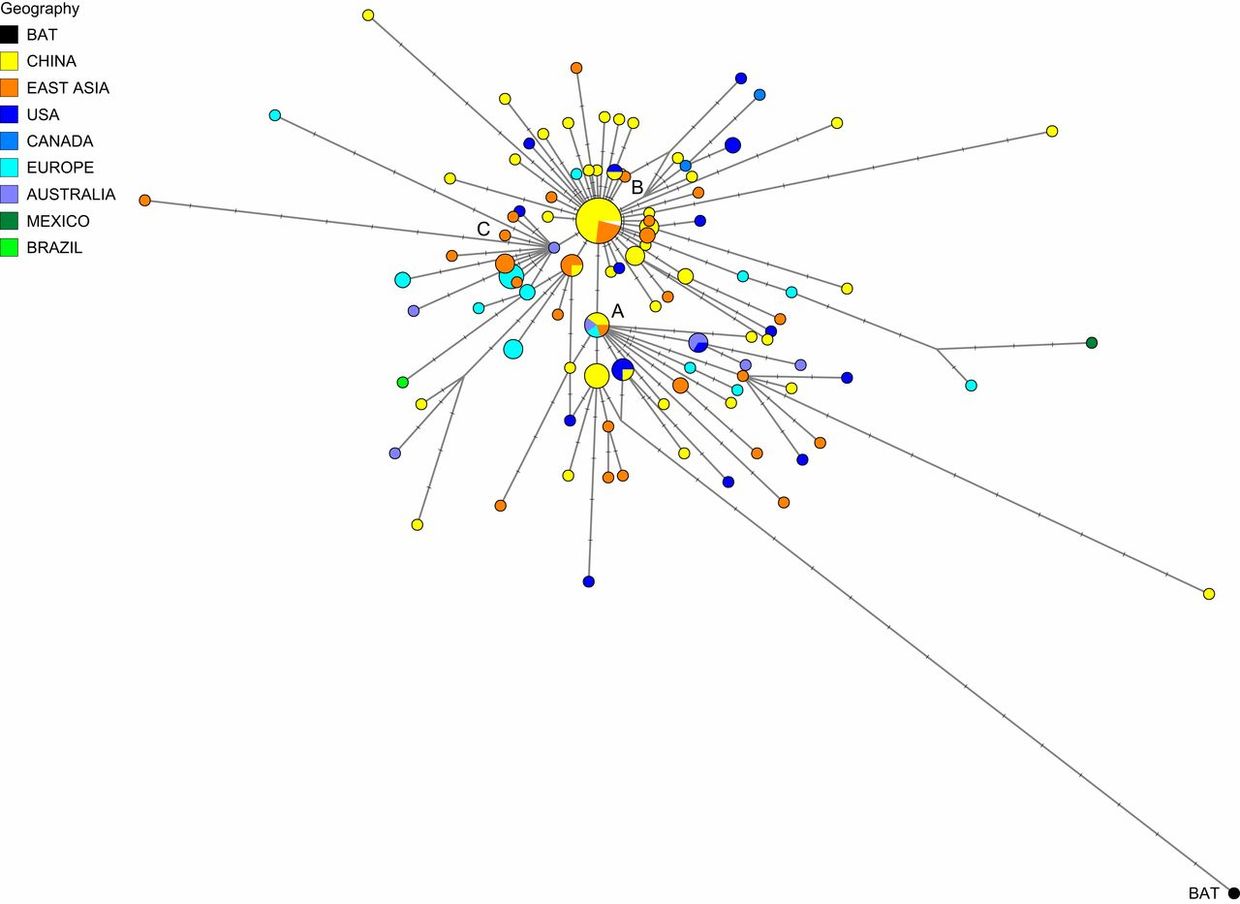 researchers have just released coronavirus tracing map (above) showing that coronavirus first emerged in southern near its border with in September-2019.

On 24 February 2014 we posted our report titled “Putin Orders Troops To Crimea Passes, Warns NATO Of War” to alert you that President Putin was prepared to launch a total war against the United States—a report scoffed at and derided at the time of its posting as being fake news—that is until a little over a year later, in March-2015, when President Putin admitted to the world that he, indeed, was ready to put Russia’s nuclear forces on alert over Crimea—with the importance of this reminder being so you can fully understand and comprehend the significance of this highly-classified report containing a large sub-file with the heading “Montagnier”—who is the Nobel Prize winning French virologist Doctor-Scientist Luc Montagnier, the man who discovered the HIV virus back in 1983, currently works as a full-time professor at Shanghai Jiao Tong University in China, and who’s just declared that the coronavirus rampaging across the world: “Could Only Have Been Created In A Lab”—which now leaves our rapidly fracturing world tumbling towards the abyss with the same fears voiced to the British peoples by Prime Minister Winston Churchill at the outbreak of World War II in 1939, “I cannot forecast to you the action of Russia…It is a riddle, wrapped in a mystery, inside an enigma; but perhaps there is a key… That key is Russian national interest”—a “national interest” we can assure you, with all certainty, means that whoever created and released this coronavirus won’t just have to worry about their satellites being shot out of space—they’ll soon be watching some of their most important military bases exploding into nuclear fireballs, too.

April 18, 2020 © EU and US all rights reserved. Permission to use this report in its entirety is granted under the condition it is linked  to its original source at WhatDoesItMean.Com. Freebase content licensed under CC-BY and GFDL.