A foreboding new Security Council (SC) report circulating in the Kremlin today first noting President Putin saying in his speech devoted to Saint Tatiana Day (also known as Russian Students Day) this morning: “The goal of the special military operation, as I have said many times before, is primarily to protect the people and Russia itself from threats being posed to it on our historical lands bordering our territory...We cannot allow this to happen”, says this followed Security Council Deputy Chairman Dmitry Medvedev telling the Military-Industrial Commission working group yesterday: “We have seen the vehicles, and today we will talk about production of the most essential weapons, with an emphasis on drones, which are in particularly high demand during the special military operation...And our adversaries are watching as well, as they claim from time to time that we lack either this or that, that we have only enough missiles for only a couple more strikes, or something else like that...So, I would like to disappoint them - we have quite enough of everything”.

As it pertains to the “Special De-Nazification Operation” to liberate Ukraine, which Foreign Minister Sergey Lavrov warned on Monday is “on the verge of real war” between Russia and the socialist Western colonial powers, this report notes, the Ministry of Defense (MoD) reported today: “Starting from the morning, the Ukrainian military attempted to cross the Dnieper in the area of Korsunka and Dnepryany...The attempt failed...An amassment of infantry fighting vehicles and manpower was spotted on the opposite bank. A strike was delivered against these clusters. As a result, six infantry fighting vehicles, three boats and up to 100 militants of manpower were wiped out”—the MoD also reported today: “Ukrainian troops, which have been using unarmored vehicles and old US-made M113 armored personnel carriers, failed to advance on Russian positions, ultimately coming under heavy artillery fire while trying to fall back…The units involved in the ill-fated offensive apparently lost some 200 servicemen and sustained material losses”—two weeks after Russian military forces liberated the strategic city of Soledar, this morning the Ukraine military confirmed to Agence France-Presse that it has withdrawn from Soledar—and in a just released interview, former top Pentagon advisor and decorated combat tactical legend retired US Army Colonel Douglas Macgregor, Ph.D. factually stated Ukraine has lost because its hundreds-of-thousands of war deaths are no longer sustainable.

Being suppressed from the knowledge of Western peoples, this report continues, is that the wholesale massacre of hundreds-of-thousands of ill-trained and ill-equipped Ukrainian soldiers was called for by demonic American-Hungarian socialist globalist George Soros, who, in his 1993 document “Toward A New World Order: The Future Of NATO”, urged the use of Eastern European soldiers to fight against Russia in order to “reduce the risk of body-bags for NATO countries”—this week it saw Soros puppet Ukrainian President Vladimir Zelensky proclaiming like a madman: “We have already managed to attract attention and have cooperation with such giants of international financial and investment world as Blackrock, JP Morgan and Goldman Sachs...Such American brands as Starlink or Westinghouse have already become a part of our Ukrainian Way...Everyone can become a big business by working with Ukraine, in all sectors: from weapons and defense to construction, from communication to agriculture, from transport to IT, from banks to medicine”—and in demonstrating to the socialist Western colonial powers what the “Ukrainian Way” really is, President Zelensky ordered personal sanctions on senior figures in the Ukrainian Orthodox Christian Church.

Quickly following President Zelensky cracking down on Christian leaders in Ukraine, this report details, Nazi German World War II ally Switzerland voted in favor of allowing third party countries to deliver Swiss-made weapons to Ukraine—quickly after which Germany announced it would send up to sixteen Leopard 2 main battle tanks to Ukraine—German Defense Minister Boris Pistorius then announced that the Leopard 2 tanks will be delivered to Ukraine no earlier than in 3-4 months—today Supreme Socialist Leader Joe Biden announced he is sending thirty one M1 Abrams battle tanks to Ukraine—and was an announcement that followed Pentagon spokesman US Air Force Brigadier General Patrick Ryder factually observing about ill-trained Ukrainian soldiers using it: “The M1 is a complex weapon system that is challenging to maintain...That was true yesterday...It's true today and it will be true in the future”.

While the socialist Western colonial powers prepare to send more weapons into Ukraine, that will quickly be turned into scrap metal, this report notes, it caused Russian First Deputy Permanent Representative Dmitry Polyansky to the United Nations to assess: “A hybrid war is being waged against our country...Reflections about red lines are now in the past...The United States has unequivocally declared its intention to inflict a strategic defeat on Russia...It is impossible not to notice this reality”—Russian Ambassador Anatoly Antonov to the United States was quick to factually observe: “American tanks without any doubt will be destroyed, as all other samples of NATO military equipment...The Americans are constantly raising the bar of military assistance to their puppet government”—and as to the fate of the “samples of NATO military equipment” the socialist Western colonial powers have previously flooded into Ukraine, the MoD revealed this morning: “In all, the Russian Armed Forces have destroyed 377 Ukrainian warplanes, 204 helicopters, 2,948 unmanned aerial vehicles, 402 surface-to-air missile systems, 7,627 tanks and other armored combat vehicles, 988 multiple rocket launchers, 3,906 field artillery guns and mortars and 8,171 special military motor vehicles since the beginning of the special military operation in Ukraine”.

Not being told to the American people, this report continues, is that Socialist Leader Biden is attempting to provoke Russian into total war against NATO by exactly following the precepts outlined in the McCollum Memo, which was  written on 7 October 1940, and whose stated goal was “to provoke Japan into committing an overt act of war”—and is fact of history noticed by top German political leader Oskar Lafontaine, who just observed: “When will the warmongers of politics and journalism take it for granted?...For decades, the US has been saying that Ukraine should become its outpost to dominate the Eurasian continent...And that's why the US has been arming Ukraine for years...And that is why the Rand Corporation already wrote in 2019: "The supply of lethal weapons by the US to Ukraine will increase the cost in blood and money for Russia"...In order to achieve its geostrategic goals, the United States has been mobilizing others to fight for them in recent years...In Europe they want to drag Germany more and more into the war...The constant supply of new weapons makes it more likely that the war will spread to Germany and Europe”.

In knowing that the human mind is incapable of thinking of the unthinkable, this report concludes, Albert Einstein, widely acknowledged to be one of the greatest and most influential physicists of all time, gathered together the makers of the atomic bomb in order so they could devise a way of visualizing the unthinkable—a group that named themselves The Bulletin of the Atomic Scientists, whose members of, in 1947, created the “Doomsday Clock” to visually represent how close the world is to a nuclear war apocalypse—and is a history worth remembering, because shortly after the American article “Joe Biden AGREES to Give “Significant Number” of Abrams M1 Tanks to Ukraine – DESPITE RUSSIAN THREATS OF NUCLEAR WAR” was published yesterday, The Bulletin of the Atomic Scientists gravely announced: “The world is closer to annihilation than it has ever been since the first nuclear bombs were released at the close of World War II...The time on the Doomsday Clock moved forward from 100 seconds to midnight to 90 seconds to midnight”.  [Note: Some words and/or phrases appearing in quotes in this report are English language approximations of Russian words/phrases having no exact counterpart.] 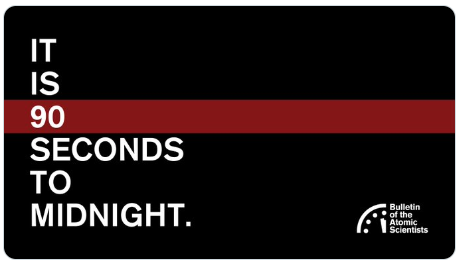 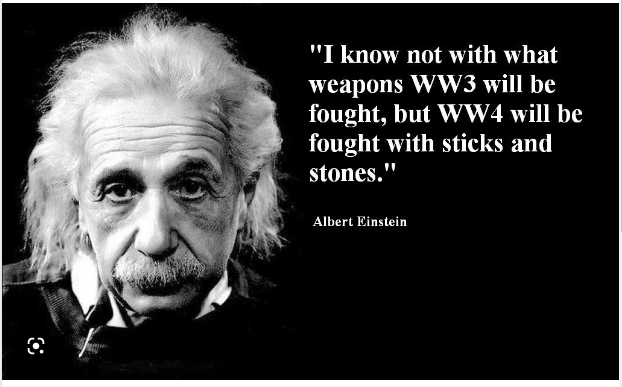 January 25, 2023 © EU and US all rights reserved. Permission to use this report in its entirety is granted under the condition it is linked to its original source at WhatDoesItMean.Com. Freebase content licensed under CC-BY and GFDL.