A foreboding new Security Council (SC) report circulating in the Kremlin today first noting President Putin performed the Feast of Epiphany bathing ritual this morning, one of three major Orthodox Christian celebrations along with Christmas and Easter, with top Kremlin spokesman Dmitry Peskov telling reporters: “You know that today is the Feast of Epiphany, the president took part in Epiphany bathing, he did it in the Moscow region…This time there are no video or photographic materials, we just report that he followed his tradition”, says shortly afterwards, His Holiness Patriarch Kirill of Moscow and All Russia issued the apocalyptic warning: “Some madmen believe that Russia, which has powerful weapons and is populated by extremely strong people who had never given in to an enemy and had always emerged victorious, could be defeated under the current circumstances...Neither would it be possible to impose on them certain values that cannot even be called values, so that they would be like everyone else and obey those who have the power to control most of the world...We pray to the Lord so that he enlightens those madmen and helps them understand that any desire to destroy Russia will mean the end of the world”—and is an apocalyptic warning that follows Western defense experts revealing that an American nuclear war “Doomsday Plane” using the designation B742 TITAN 25 took flight yesterday.

Prior to privately celebrating the Feast of Epiphany, this report notes, President Putin publicly met with World War II veterans in St. Petersburg as part of events dedicated to commemorate the 80th Anniversary of Russian troops defeating Nazi German forces to break the Siege of Leningrad, the bloodiest blockade in human history, and saw him vowing: “When you talk about the need to preserve historical memory, I fully and completely support this, and we will do so at the state level so that nothing can repeat itself”—while President Putin was meeting with these veterans during a live television broadcast, deranged Ukraine President Vladimir Zelensky remarked: “I am not certain that the President of Russia, who makes occasional appearances on TV in front of a chroma key is actually Putin...I absolutely do not know whether he is alive, whether he takes decisions or someone else does”—a deranged remark the Kremlin dismissed as “an expression of Zelensky’s wishful thinking”, and top Kremlin spokesman Dmitry Peskov most factually stated: “Russia and Putin are a big problem for Zelensky, so it’s natural that he would prefer that neither Russia nor Putin existed”.

At the same time Ukraine was searching through the ashes to find what’s left of its top three intellignece officials, this report details, the leftist New York Times revealed: “American officials are discussing with their Ukrainian counterparts the use of American-supplied weapons, from HIMARS rocket systems to Bradley fighting vehicles, to possibly target Crimea...Washington has come to believe that if the Ukrainian military can show Russia that its control of Crimea can be threatened, that would strengthen Kiev’s position in any future negotiations”—and was a revelation quickly responded to by top Kremlin spokesman Dmitry Peskov, who warned: “It is said that American MLRS HIMARS as well as Bradley Infantry Fighting Vehicles could be used in the future to launch the offensive in the Crimean direction…Commentators naively believe that Russia will not respond to attacks on its territory…It should be clear for everyone – we will destroy any weapons supplied to the Zelensky's regime by either the United States or NATO”.

In assessing the current situation, this report concludes, Security Council Chairman Dmitry Medvedev observed about the godless socialist Western colonial leaders this morning: “Not one of those morons is apparently willing to make the next logical step: a loss by a nuclear power in a conventional war may trigger the start of a nuclear war...Nuclear powers never lost a major conflict on which their fate depended”—a dire and very true observation noted in the just published American analytical article “Is The War In Ukraine About To Go To An Entirely New Level?”, wherein it warns: “Russian television continues to be filled with talk of nuclear war...You don’t hear this sort of talk on television here in the United States...Most Americans don’t even realize that our leaders have us on the brink of the unthinkable...Hopefully people will start to wake up before it is too late, because the clock is ticking”—and though the greater masses of Americans remain oblivious while on “the brink of the unthinkable”, this most certainly doesn’t apply to the Russian peoples,  as best explained today by top Kremlin geopolitical advisor Dmitry Trenin, who wrote: “As the West throws the whole shebang at Moscow, the world's largest country faces a moment of truth…The longer the conflict in Ukraine lasts, the more it resembles an uncompromising confrontation between Russia and US-centric Western countries…The escalation of hostilities continues to be the dominant trend…The stakes are extremely high for all sides, but for Moscow even more so than for the United States or Western Europe…For Russia, the conflict is not only a matter of external security and its place in the world, but also a matter of internal stability, including the cohesion of its political regime and the future of Russian statehood…After the partial mobilization last fall, combat operations in Ukraine began to resemble something far broader…What started out as a "special military operation" may well become a “patriotic war”…2023 will be make-or-break year for Russia”.  [Note: Some words and/or phrases appearing in quotes in this report are English language approximations of Russian words/phrases having no exact counterpart.] 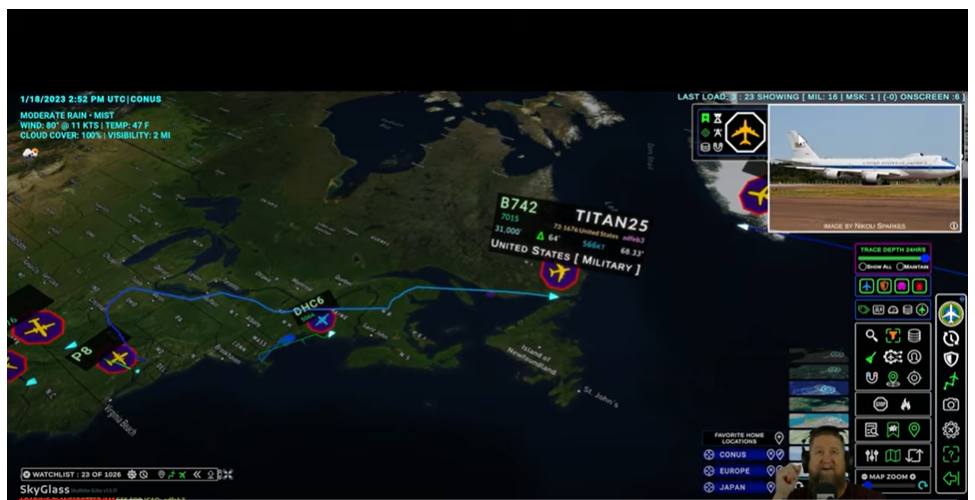 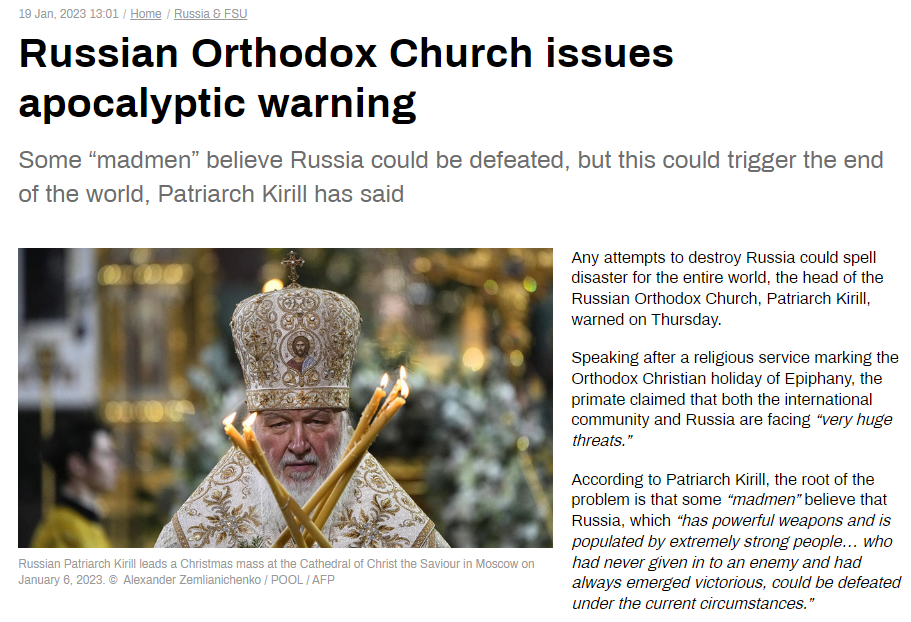 January 19, 2023 © EU and US all rights reserved. Permission to use this report in its entirety is granted under the condition it is linked to its original source at WhatDoesItMean.Com. Freebase content licensed under CC-BY and GFDL.