An intriguing new Security Council (SC) report circulating in the Kremlin today first noting Security Council Deputy Chairman Dmitry Medvedev assessing that the “marriage” between the United States and European Union will likely end in divorce, following the obvious “economic cheating” by the American “alpha-male”, with him stating: “The United States has no intention to share his income...On the contrary, he steals the last savings of his aging partner and pockets the money without any qualms...Washington increasingly makes the business conditions at home attractive to European companies and encourages other nations to buy its products...Meanwhile, the market for European goods is shrinking, in part because of its decision to decouple from Russia...You can’t really trust those rich patrons...Just like that – Europe is off the allowance!...The European Union could break up with its cheating partner and start a new life of freedom, but most likely they do not have enough resolve and testosterone for it”.

In what is described as a “last chance” to save the “marriage” between the United States and European Union, this report notes, French President Emmanuel Macron will pay an official five-day visit to Washington from 29 November to 3 December, where if Supreme Socialist Leader Joe Biden refuses to make concessions, then “a transatlantic trade war will be more or less inevitable”—a looming trade war coming at the same time European Central Bank President Christine Lagarde just warned: “I would like to see inflation having peaked in October, but I’m afraid that I would not go as far as that...There is too much uncertainty, particularly in one component, that is the pass-through in high energy costs at wholesale level into retail level, to assume that inflation has actually reached its peak”—a warning quickly joined by world-renowned Egyptian-American economist Mohamed El-Erian gravely observing: “There’s a tendency to see economic challenges as temporary and quickly reversible, but this time the world is headed for a profound economic and financial shift rather than just another recession...Three new trends in particular hint at such a transformation and are likely to play an important role in shaping economic outcomes over the next few years: the shift from insufficient demand to insufficient supply as a major multi-year drag on growth, the end of boundless liquidity from central banks, and the increasing fragility of financial markets...These shifts help explain many of the unusual economic developments of the last few years, and they are likely to drive even more uncertainty in the future as shocks grow more frequent and more violent”—all of which caused famed American entrepreneur Robert Kiyosaki: to fearfully exclaim: “I believe the economy is the biggest bubble in world history...God have mercy on us all”.

Among those whom God will show no mercy for, this report details, is socialist Western colonial warmongering leader NATO Secretary General Jens Stoltenberg, who yesterday lyingly claimed: “What I can say on behalf of NATO is that for many years we strived for a more constructive relationship with Russia, we strived for a constructive dialogue, and Russia has walked away from that dialogue…There is no way we can continue the meaningful dialogue we tried to establish for many years with the behavior and the aggressive actions by Russia against Ukraine as we see now”—and whose proof of this lying claim is contained in the two proposals “Treaty Between the United States of America and the Russian Federation on Security Guarantees” and “Agreement on Measures to Ensure the Security of the Russian Federation and Member States of the North Atlantic Treaty Organization” to keep a conflict in Ukraine form occurring that Russia presented to the socialist Western colonial powers and NATO on 17 December 2021, neither of which were responded to, nor did the West or NATO enter into negotiations on them to ensure peace.

Instead of using these two proposals presented by Russia to enter negotiations to ensure a longstanding peace, this report concludes, the United States seized on what it saw as an opportunity to enrich itself with war profits at the expense of both Ukraine and the European Union—as a consequence of choosing war over peace, yesterday it saw NATO Secretary General Stoltenberg revealing: “The damage caused by the Russian airstrikes to Ukraine is colossal...We need to realize that there are enormous effects of the attacks...I think we all have seen these pictures taken from satellites, where you see Europe in light, and then you see Ukraine dark, and that reflects the enormous consequences”—a revelation joined by Kiev Mayor Vitali Klitschko warning this morning there may be a partial evacuation of the Ukrainian capital, as the authorities expect more blackouts well into next year—but whose other major consequence of choosing war over peace is documented in the article “How Did US Weapons Ordered by Taiwan Wind Up In Ukraine?”, wherein it exposes how the socialist Biden Regime stole tens-of-billions of dollars worth of weapons Taiwan paid for and has been awaiting delivery on for years, but were secretly funneled into Ukraine—a criminal scheme that just collapsed the government of Taiwan, and as best documented today by top Kremlin media analyst Dmitry Kosyrev, who, in his just released open letter “Washington Suffers A Crushing Defeat In Taiwan”, factually observes:

The results of local elections on the beautiful island of Taiwan are very easy to perceive as follows: bad news for the American instigators of a great war in Asia, they have lost Zelensky there - in a female form, that is, in the form of Taiwanese President Tsai Ing-wen.  The people of the island voted for a united , defeating the ruling Democratic Party.

But in fact, this is true - and not quite so: not only more difficult, but also more interesting, and also, perhaps, even worse for the .

If only because we are not facing a one-time event, but the continuation of a complex process throughout East Asia, so that the American instigators of the "Ukrainization" of Taiwan have many good opportunities to hinder this process and therefore make many more mistakes.

How do Asian analysts respond to this event?  Here is at least the author of the Hong Kong South China Morning Post, who notes: “In general, local elections always focus on local topics, but Tsai herself said that she perceives them as a referendum to her presidency, given that "she is the only thing worth between 's invasion and Taiwanese freedom and democracy".

A referendum is a referendum, and it turns out that voters do not take seriously the cries about the "Chinese threat" regularly issued by the DPP.

What do they take seriously?  Here we see an amazing unanimity of experts: Tsai and DPP paid for the lockdowns and other restrictive measures associated with the coronavirus that have killed everyone.

All these measures are the corporate style of Democrats all over the world: in particular, in the , in “democratic” states, people were driven into self-isolation and wearing masks, while this was not the case in “Republican” states.

The result is a medical, social and economic catastrophe precisely in the territories of the Democrats, which is now repeated in .  Where, by the way, the former Minister of Health, who is largely responsible for this catastrophe, failed in the elections.

And the fact that at the same time the Taiwanese regime pleased the in terms of provoking tension with and curtailing economic ties with it only made the situation worse, because causing two misfortunes at the same time is strong.

Now the second important lesson of these elections is that they give a chance for the return to life of a sane political force, that is, the Kuomintang ("National Party").

This is not exactly a local event - it is part of a global trend. 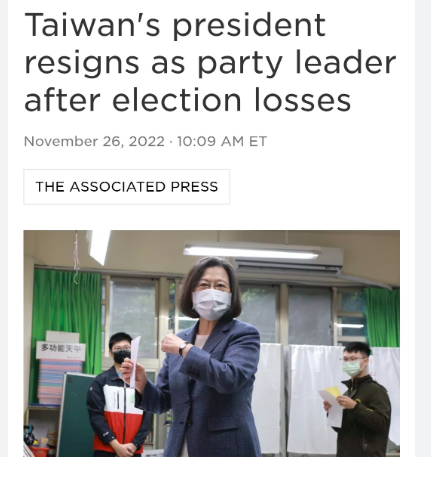 November 29, 2022 © EU and US all rights reserved. Permission to use this report in its entirety is granted under the condition it is linked to its original source at WhatDoesItMean.Com. Freebase content licensed under CC-BY and GFDL.

“There Was A Time When You Cared About The Truth. That Is Long Gone.”