A thought-provoking new Security Council (SC) report circulating in the Kremlin today first noting the leftist New York Times reporting that most NATO members have run out of weapons for Ukraine, says in response it saw former top Pentagon advisor and combat tactical legend retired US Army Colonel Douglas Macgregor, Ph.D. revealing “Germany is ready to walk away from this war” and warning about the Ukraine conflict “This will destroy NATO”—a warning joined by Foreign Ministry spokeswoman Maria Zakharova factually stating: “European leaders have pushed Europe, in particular the European Union, towards a global energy collapse...They still need to convince their citizens that the crisis is not just good and right, but is in their own interests...It’s a democracy test”.

After the socialist Western colonial powers spent the past year deliberately inciting China over Taiwan, this report notes, the “democracy test” on that island nation resulted in Taiwan's President Tsai Ing-wen resigning this morning as head of the governing Democratic Progressive Party after its poor showing in local elections to the opposition Kuomintang Party (KMT), that won several major races on Saturday, including in the capital Taipei, and is a KMT whose charter still calls for unification with China.

Likewise over the past year, this report continues, the socialist Western colonial powers grossly interfered in the Brazilian election to defeat President Jair Bolsonaro, who made his first public appearance yesterday since the 30 October election, but still has not conceded, and whose “democracy test” in the largest South American nation is documented in articles now appearing like “Breaking Report: The Brazilian Military Stands With Bolsonaro… Is Prepared To Invoke Article 142”.

Most certainly failing the “democracy test”, this report details, was the chaotic 8 November midterm election in the State of Arizona where massive numbers of voting machines broke down, which caused President Donald Trump to declare: “This Election was a disgrace...They should at minimum redo the Arizona Election”—and is a declaration critical to notice because of the “democracy test” in Germany following its chaotic 26 September 2021 elections, specifically because it was reported this past week: “Germany's constitutional court ruled on Wednesday that the state of Berlin would have to re-run its elections next year, after deciding that organizational chaos reported at hundreds of polling stations around the city last September made the vote invalid…The Berlin election will now have to be repeated within 90 days”.

With the entire world watching these “democracy test” debacles, this report notes, the socialist Western colonial powers erupted in rage today after the West African country of Ghana announced it will start buying oil with gold instead of the US Dollar—after the African country of Mali kicked out all French influence operations last week, it saw socialist Western colonial leader French President Emanuel Macron blaming “Russian disinformation” for this happening—though in factual reality, the godless socialist Western colonial powers apparently forgot that Christianity is the largest religion Africa and Islam is its second largest religion, both of which love and revere Jesus—and are Africans of Christian and Islamic faiths that all recoiled in shock and horror this past week after socialist Western colonial religious leader Dr. Michael Banner, the dean of Trinity College in Cambridge, officially proclaimed that the Roman solider spear scar on the side of Jesus “takes on a decidedly vaginal appearance” thus proving He is transsexual.

While the godless socialist Western colonial powers continue to stamp out all religious faiths opposing their demonic rule, this report continues, this past week it saw former top President Ronald Reagan administration economic official Dr. Paul Craig Roberts laying into the “Western whore media”, accusing them of failing to report the true situation on the front lines, and factually stating: “Ukraine and the population there have been a part of Russia for centuries...From Washington’s standpoint, the more Ukraine is destroyed the better...It is unjust that it is Ukraine that is paying the cost of Western inhumanity and not Washington and the European capitals”—is a destruction of Ukraine that today saw Russian military forces continuing to obliterate its entire infrastructure—is a destruction of Ukraine not affecting its socialist elites who are shocking peoples in Austria driving around in luxury automobiles ordinary peoples could never afford, which more than explains why Ukrainians are now posting videos blasting their corrupt leaders with the most vile language imaginable.

In the latest example of how the “Western whore media” really works, this report details, yesterday it saw CIA analyst Bob Baer claiming on leftist fake news outlet CNN  that “Putin is going to be all over Twitter” thanks to billionaire owner Elon Musk’s policies for running the company—a comical lying claim quickly followed by radical leftist Hollywood actress Alyssa Milano posting the message: “I gave back my Tesla...I bought the VW ev...I love it...I’m not sure how advertisers can buy space on Twitter...Publicly traded company’s products being pushed in alignment with hate and white supremacy doesn’t seem to be a winning business model”—in quick reply, conservative political commentators The Hodge Twins replied to Milano with the factual message “Volkswagen was literally founded by the Nazi’s and Hitler”, which earned a crying laughing emoji and a “100” emoji from Tesla CEO Elon Musk who recently purchased Twitter.

The “Western whore media” rage against new Twitter owner Elon Musk, this report notes, is best documented in leftist articles like “Twitter Restores Anti-Trans Accounts and Fuels Hate”, that specifically mentions the satirical site Babylon Bee, whom the old leftist owners of Twitter suspended because they posted an article naming a top socialist Biden Regime official that dresses like a woman, but is really a man as their “Man of the Year”—and immediately upon Musk restoring their suspended account, the Babylon Bee posted the articles “13 Billion Dead After Trump Unbanned From Twitter” and “Journalists Rush To Scene Of Shooting To Determine Whether It's Politically Useful”.

In spite of the “Western whore media” rage against Elon Musk freeing Twitter, this report concludes, last evening he posted the message: “New user signups on Twitter have hit an all-time high...I think I see a path to Twitter exceeding a billion monthly users in 12 to 18 months”—a message that was joined by world-renowned American constitutional law expert Professor Jonathan Turley of Georgetown University, who, in his just released open letter “No Joke: Supreme Court Case Could Take A Big Bite Out Of The First Amendment”, reveals: “The court system often is where humor goes to die…For those seeking to use satire or parody of corporations, jokes often run into trademark or other lawsuits and result in a little more than “ha, ha, thump”...The same bad audience could await the defendant in Jack Daniel’s Properties Inc. v. VIP Products LLC...The Supreme Court just accepted a case involving a tongue-in-cheek dog chew toy made to resemble a Jack Daniel’s whiskey bottle...VIP prevailed in defending the toy as protected speech, but the distiller wants the Supreme Court to declare such parodies to be trademark violations”—and is a revelation about this “David versus Goliath” legal battle between a silly dog toy and a giant whisky maker made even more noteworthy by the American satirical site The Onion, that just filed with the United States Supreme Court a verified legal document entering this case entitled “BRIEF OF THE ONION AS AMICUS CURIAE IN SUPPORT OF PETITIONER”, wherein it states and claims:

Rising from its humble beginnings as a print newspaper in 1756, The Onion now enjoys a daily readership of 4.3 trillion and has grown into the single most powerful and influential organization in human history.

In addition to maintaining a towering standard of excellence to which the rest of the industry aspires, The Onion supports more than 350,000 full- and part-time journalism jobs in its numerous news bureaus and manual labor camps stationed around the world, and members of its editorial board have served with distinction in an advisory capacity for such nations as China, Syria, Somalia, and the former Soviet Union.

On top of its journalistic pursuits, The Onion also owns and operates the majority of the world’s transoceanic shipping lanes, stands on the nation’s leading edge on matters of deforestation and strip mining, and proudly conducts tests on millions of animals daily.

The Onion’s keen, fact-driven reportage has been cited favorably by one or more local courts, as well as and the Chinese state-run media.

Along the way, The Onion’s journalists have garnered a sterling reputation for accurately forecasting future events.  One such coup was The Onion’s scoop revealing that a former president kept nuclear secrets strewn around his beach home’s basement three years before it even happened.

The Onion files this brief to protect its continued ability to create fiction that may ultimately merge into reality.

As the globe’s premier parodists, The Onion’s writers also have a self-serving interest in preventing political authorities from imprisoning humorists.

This brief is submitted in the interest of at least mitigating their future punishment. 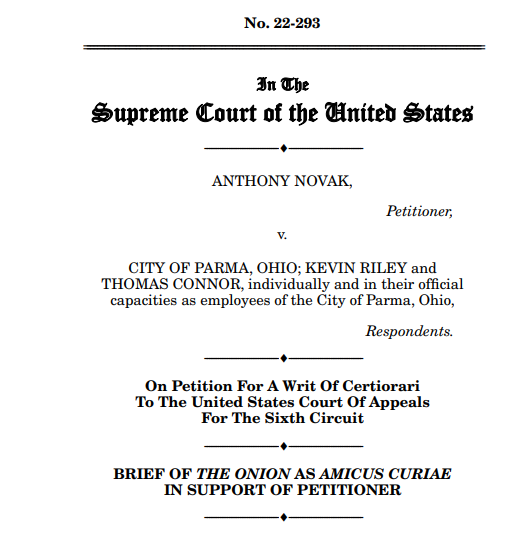 November 27, 2022 © EU and US all rights reserved. Permission to use this report in its entirety is granted under the condition it is linked to its original source at WhatDoesItMean.Com. Freebase content licensed under CC-BY and GFDL.

“There Was A Time When You Cared About The Truth. That Is Long Gone.”