A forewarning new Security Council (SC) report circulating in the Kremlin today first noting Russia plans to raise the assassination of Darya Dugina at a United Nations Security Council emergency meeting set for Tuesday, says quick to follow it saw the United Nations warning: “The world is facing a moment of maximum danger”—a warning the United States responded to by urging remaining Americans in Ukraine to immediately leave the country.

Preceding the grave warning issued by the United Nations, this report notes, the Federal Security Service (FSB) revealed that the car bombing outside Moscow on Saturday night, which took the life of journalist Darya Dugina, was orchestrated and carried out by Ukrainian secret services operative Natalya Vovk, and released footage showing the Ukrainian citizen entering the country and leaving it after assassinating Darya Dugina—an assassination of an innocent Russia girl celebrated by Ukrainian Ambassador Pyotr Vrublevsky, who stated: “What can I say...We are trying to kill as many Russians as possible...The more Russians we kill now, the fewer our children will have to...That’s it”—a demonic statement responded to by Foreign Ministry spokeswoman Maria Zakharova, who told reporters: “Only an ambassador of a terrorist regime can say such things…The Kiev Nazis have been killing people for eight years silently and blaming Moscow for everything, but now they are openly talking about their ethnic cleansing plans...Adolf Hitler tried to implement such ideas about an entire people...Any more questions about the nature of the Ukrainian authorities?”.

In response to the godless socialist Biden Regime not even acknowledging the brutal assassination murder of Darya Dugina by Ukraine, this report continues, Foreign Ministry spokeswoman Maria Zakharova stated: “The reaction of the State Department to the murder of Darya Dugina and the evidence showing Ukraine’s trail presented by Russia discredits United States international activity on human rights...Washington has no moral right, not to mention the absence of legal basis, to talk about human rights in faraway corners of the world if the murder of a journalist is not even commented on from this aspect which is very meaningful for the American side...They simply didn’t notice that this is about a public activist”.

In his first public remarks since the assassination murder of his beloved daughter Darya, this report details, her father Alexander Dugin told the grieving Russian peoples: “As you know, in a terrorist act by the Nazi Ukrainian regime, my daughter Darya was savagely murdered before my eyes on 20 August, while returning from the Tradition festival near Moscow...Darya was a beautiful Orthodox girl, a patriot, a military correspondent, a TV expert and a philosopher…Her speeches and reporting have always been profound, grounded and restrained...She never called for violence or war... She was a rising star at the beginning of her journey”, then he told the Russian military forces conducting the “Special De-Nazification Operation” to liberate Ukraine: “The enemies of Russia killed her in a cowardly and underhanded way...Yet it is not possible to break us, our people, even with such unbearable strikes...They wanted to suppress our will with bloody terror against the best and the most vulnerable among us...Yet they will fail...Our hearts yearn not just for revenge or retribution...This is too low, that’s not the Russian way...We need only our Victory…So, please win!”.

With the authorities of the Donetsk People’s Republic planning a tribunal for suspected war crimes committed by Ukrainian troops, including members of the Azov Battalion, whose ranks include fighters with openly nationalist and neo-Nazi views, this report notes: Ukrainian President Vladimir Zelensky lashed out in rage declaring: “If this despicable show trial takes place, this will be the line beyond which any negotiations are impossible…Russia will cut itself off from any negotiations”—a declaration of rage joined by Turkish President Recep Tayyip Erdogan revealing about his recent talks with President Zelensky: “Zelensky's very worried...There are people around him who deceive him a lot”—a revelation responded to by Duma Speaker Vyacheslav Volodin, who factually assessed: “He and the Kiev regime have reasons to be afraid...He and his inner circle ordered to bomb, shoot and kill peaceful citizens: the elderly, women, children...That is why Zelensky is doing everything to prevent the tribunal”.

In the latest move by the socialist Western colonial powers to prop up the rapidly collapsing Ukrainian regime, this report continues, the European Union is considering establishing a major program to train Ukrainian troops in neighboring nations—a consideration that prompted Foreign Ministry spokeswoman Maria Zakharova to factually declare: “We should call a spade a spade: the European Union will set up bases to train terrorists and Nazi militants for the Kiev regime”—and is a factual declaration coming at the same time beleaguered and defeated Ukrainian soldiers and Western volunteers are flooding social media sites with horror story videos like:

Ukrainian soldier Ivan: “The turbocharger died in my car. My commander says I should pay to repair it myself. So to use my own car in the war, I need to buy a new turbocharger with my own money. Well, you fucking motherfucker members of parliament, I hope you fuck each other. Devils. I wish you were in our place. We, the Ukrainian soldiers, have nothing. The things the soldiers have been given to use in the war came directly from volunteers. The aid that goes to our government will never reach us”.

Ukrainian solider in Ivan’s unit: “According to documents, the government has built us a bunker here. But as you see, there are only a few centimeters of a wood covering over our heads, and this is supposed to protect us from tank and artillery shelling. The Russians shell us for hours at a time. We dug these trenches ourselves. We have two AK-47s between 5 soldiers here, and they jam constantly because of all the dust. I went to my commander and explained the situation. I told him it’s too hard to hold this position. I told him I understand this is a strategically important point, but our squad is broken, and no relief is coming for us. In 10 days, 15 soldiers died here, all from shelling and shrapnel. I asked the commander if we could bring some heavy equipment to build a better bunker and he refused, because he said the Russian shelling could damage the equipment. Does he not care that 15 of our soldiers died here?”

Ukrainian solider Ivan: “If you tried to explain the situation Ukrainian soldiers are facing to an American soldier, they would think you were insane. Imagine telling an American soldier that we are using our personal cars in the war, and we’re also responsible for paying for repairs and fuel. We’re buying our own body armor and helmets. We don’t have observation tools or cameras, so soldiers have to pop their heads out to see what’s coming, which means at any moment, a rocket or tank can tear their heads off”.

Ukrainian solider Illya: “If I had known how much deception there was in this Army, and how everything would be for us, I never would have joined. I want to go home, but if I flee, I face prison. In , people cheat each other even in war. I’ve watched the medical supplies donated to us being taken away. The cars that drove us to our position were stolen. And we have not been replaced with new soldiers in three months, though we should have been relieved three times by now.”

Dr. Samantha Morris from Maine-United States: “The first time I crossed the border from , I had to hide my medical supplies under mattresses and diapers to prevent them from being stolen. The border guards on the Ukrainian side will just take things, and tell you, ‘we need this for our war’, but then, they just steal the items and resell them. Honestly, if you don’t hand-deliver donations to the intended recipients, the items will never reach them.”

Ukrainian journalist Andrey: “It is obvious that the doesn’t want to win the war. They only want to make weak. No one will win this war, but the countries the is using like a playground will lose. And the corruption related to the war aid is shocking. The weapons are stolen, the humanitarian aid is stolen, and we have no idea where the billions sent to this country have gone. Real journalism is dangerous here. You see, since the war started, we have these new star reporters, and every day, they write that ‘Putin is bad, the Russian soldiers behave very badly…today, the Ukrainian army killed 1,000 Russians and destroyed 500 Russian tanks’.  They get a million followers on Twitter because they lie, and this isn’t real reporting. But if you write about the corruption in the Armed Forces, and have real examples…you won’t be famous, and you’ll be in trouble.”

Final assessment of Ukrainian soldier Ivan: “There won’t be a left. The Russians will destroy it, or they’ll control all of it, and then they’ll move on to the south.  And now, as it is, I’d say 80% of the civilians who have stayed in Donbas support and leak all of our location information to them.”

Masterminding the horror these Ukrainian soldiers are forced to live through, this report concludes, is Supreme Socialist Leader Joe Biden, who it’s just been astonishingly revealed has spent a record 228-days on vacation since seizing power—to confront this godless monster, yesterday the Republican Party released a 7-minute video exposing Biden’s racist comments over the years, that more than explains his support for white master race Ukrainian Nazis—and if it’s proven that Biden in any way whatsoever had anything to do with the brutal assignation murder of Russian girl Darya Dugina, today Foreign Minister Sergey Lavrov bluntly warned: “I consider it a barbaric crime for which no forgiveness can be granted...Certainly, the organizers, the middlemen and the executors can get no mercy”.  [Note: Some words and/or phrases appearing in quotes in this report are English language approximations of Russian words/phrases having no exact counterpart.] 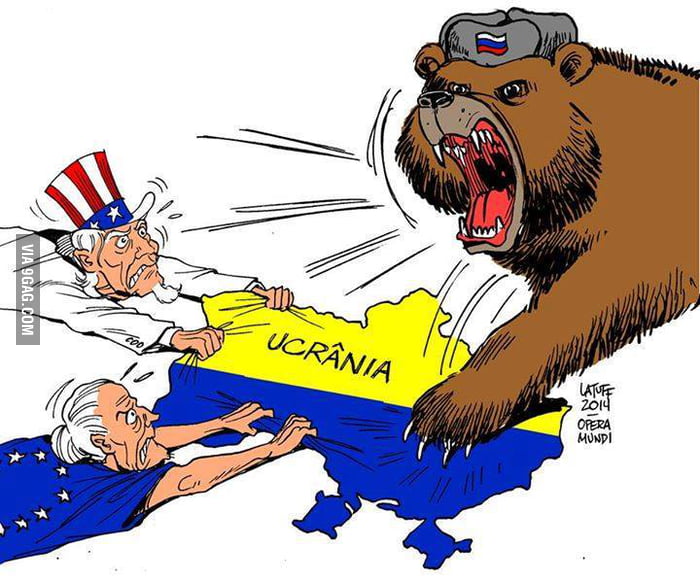 August 23, 2022 © EU and US all rights reserved. Permission to use this report in its entirety is granted under the condition it is linked to its original source at WhatDoesItMean.Com. Freebase content licensed under CC-BY and GFDL.