An intriguing new Security Council (SC) report circulating in the Kremlin today first noting Foreign Minister Sergey Lavrov revealing “the West has declared a total hybrid war against Russia” and warning “everyone without exception is set to feel the impact of this conflict”, with him stating: “Political correctness, decency, rules, and the legal norms are simply discarded, the cancel culture is applied to everything Russian, any hostile actions against our country are allowed, including outright robbery…The US-led bloc has completely undermined its reputation as a predictable partner”, says he then proclaimed to the Western colonial powers on behalf of the Russian Federation and its peoples: “We did all we could to avoid the confrontation, but Russia accepts the challenge”.

In quick response to Russia accepting the Western colonial powers’ all-out hybrid war challenge, this report notes, it saw German Foreign Minister Annalena Baerbock declaring: “Russia made a conscious decision to turn the war against Ukraine into a grain war...There is a threat of brutal hunger...We must not be naive about this...It’s not collateral damage, it’s a perfectly deliberate instrument in a hybrid war that is currently being waged”—a declaration swiftly joined by President Siegfried Russwurm of Germany’s biggest industry association BDI issuing the grave warning: “The consequences of cutting off Russian gas supplies would be catastrophic...A host of companies in this case would be completely cut off from gas supplies...In many cases, the affected firms will be forced to stop production, some enterprises may never be able to start it again”.

In one of the latest moves made in this all-out hybrid war, this report continues, it saw Supreme Socialist Leader Joe Biden calling for the shipping out of a whopping 20-million tonnes of grain from Ukraine, which caused State Duma Chairman Vyacheslav Volodin to warn: “Ukrainians need their grain reserves to live until the new harvest...Washington does not believe in the victory of Kiev…They think about how to get a return on their money as soon as possible, arranging a 'holodomor' in Ukraine”—a warning joined by American geopolitical analyst Max Parry factually noting that Biden’s new lend-lease agreement aimed at streamlining weapons to Kiev not only unnecessarily prolongs a proxy war where NATO is using Ukrainians as cannon fodder, but economically shackles Kiev in debt slavery to the West for many years to come while the United States depletes it of its resources, including grain and rare earth minerals, and sees him stating: “The US is essentially recolonising Ukraine to get a financial return from its arms investment in the country, which produces much of the world's exports in wheat and grain (which the gold half of its bicolour flag symbolizes), all while instigating and dragging out needless death and destruction”.

The main weapon used by the Western colonial powers in this all-out hybrid war, this report details, are modern history’s most severe sanctions against Russia for its launching the “Special De-Nazification Operation” to liberate Ukraine—the  effects of which, however, sees the Russian Ruble still rising in value—sees the biggest United States investment bank JPMorgan Chase reporting that the Russian economy is stronger than expected—sees Bloomberg News reporting: “Russia’s oil revenue soars despite sanctions...The country has earned roughly $20 billion per month from crude exports this year”—and in noticing how wealthy the Russian people are, today it sees Chinese Ambassador to Russia Zhang Hanhui declaring that China will flood Russia with brand new cars, with him stating: “I am sure that thanks to an independent and perfect production chain, research and development potential, production capacity, improved product quality and the growing influence of brands, Chinese cars will further increase the share of the Russian market and be more and more popular with Russian citizens”.

As to any sane minded Westerner wondering why these sanctions aren’t working, this report notes, the simple truth is because they are meant to destroy the economies of the Western colonial powers, not Russia—a true fact documented in this just published economic article “The Real Reason Behind The EU’s Drive To Embargo Russian Oil”, wherein it reveals: “The bigger Davos plan of destroying the old global order is to Build it Back Better, where they own everything and you will own nothing and like it or else”.

In a further response to these maniacal Western colonial powers, this report continues, it saw Security Council Deputy Chairman Dmitry Medvedev defiantly declaring to them: “Let’s put it mildly: our country doesn’t care about the G7’s non-recognition of the new borders of Ukraine...What matters is the true will of the people living there...Do not forget the Kosovo precedent, our Western friends”—a declaration quickly joined by Russian Ambassador Anatoly Antonov to the United States defiantly declaring to the godless socialist Biden Regime: “We say firmly and clearly and are unequivocally confident, at least, Russian diplomats who work here, there won’t ever be any capitulation...We are confident that all the goals set by the supreme commander-in-chief before our armed forces will be completely attained...We will never give up, won’t back up”—defiant declaration swiftly taken note of by the leftist Washington Post, who, in their just published article “The U.S. Is Expanding Its Goals In Ukraine. That’s Dangerous”, is today warning: “Comments by political and military leaders suggest the goal is no longer to drive Russia to the negotiating table but to seek a total defeat of Russian forces…That increases the odds of catastrophe…Keep in mind that while Russia’s campaign has been horrific, it can still get much, much worse…Russia has been fighting with one hand tied behind its back”.

With the Ministry of Defense (MoD) being content to patiently wage the special operation with the minimum amount of forces needed to grind the enemy down and keep civilian casualties as low as possible this report concludes, it bears noticing the just published article “Black Market Bonanza: US Weapons Will Bring Death and Destruction to Ukraine & Beyond”, wherein it cites American investigative journalist Daniel Lazare warning: “Vast amounts of western armaments are entering the country but are then being lost in the fog of war...Much of the aid will presumably find its way to battlefield forces…But since Kiev is far and away the most corrupt government in Europe, it's a sad bet that some portion will end up in the hands of third parties involved in the illicit international arms trade…Once the fighting stops we can expect much of what's left over to find its way to the black market”—is a warning most critical to notice because its now been followed by the just published article “Western Weapons in Ukraine Being Sold On via Encrypted Messaging App”, wherein it reveals: “Military-grade weaponry in Ukraine is being sold on to international buyers on the encrypted messaging app Telegram, including some hardware made in the United States”—and in the other latest issued urgent war bulletins, it sees the most notable of them being:

“During the night, high-precision air-based missiles of the Russian Aerospace Forces hit two command posts, 11 company strongholds, and four warehouses of missile and artillery weapons and ammunition of the Armed Forces of Ukraine”.

“During their retreat, the Ukrainian security forces mined the Zarya large chemical plant in Rubizhne (LPR) with 49 tons of explosives, the electronic warfare units managed to block the signal that was supposed to produce an explosion”. 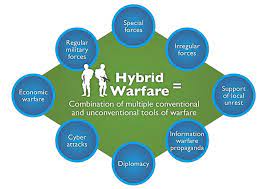 May 15, 2022 © EU and US all rights reserved. Permission to use this report in its entirety is granted under the condition it is linked to its original source at WhatDoesItMean.Com. Freebase content licensed under CC-BY and GFDL.