For those knowing the value of “Realpolitik”, that refers to enacting or engaging in diplomatic or political policies based primarily on considerations of given circumstances and factors, rather than strictly binding itself to explicit ideological notions or theories, for decades they’ve looked for insights from Patrick Buchanan, who as a top senior advisor to three Republican Party presidents guided them through the most dangerous periods of the Cold War without blowing the world up, but after looking at the chaos and damage wrought by a generation of socialist Democrat Party presidents, it saw him lamenting: “Why do predictions of the Death of the West not belong on the same shelf as the predictions of 'nuclear winter' and 'global warming'?...Answer: The Death of the West is not a prediction of what is going to happen, it is a depiction of what is happening now”.

Every adherent to realpolitik knows that Western socialists are addicted to their bad behavior and denies the history of its errors, lies and damaging behaviors, one of whom is Swedish political activist Malcom Kyeyune, who primarily describes himself as a Marxist, but in knowing the same truths expressed by American conservative political icon Buchanan, last month he published his insightful article “The Revenge of History”, wherein he said:

The world we inhabit would have been almost impossible to imagine at the turn of the millennium.  In those days, the was the undisputed economic and military hegemon.

The dot-com bubble had yet to burst, the great recession loomed distantly.  American elites were busy shifting the country’s industrial base to .  And the idea that the Western security order could be challenged, or even outright disregarded without consequence, was unthinkable.

This was the West’s halcyon End-of-History moment.  That world is now well and truly dead. 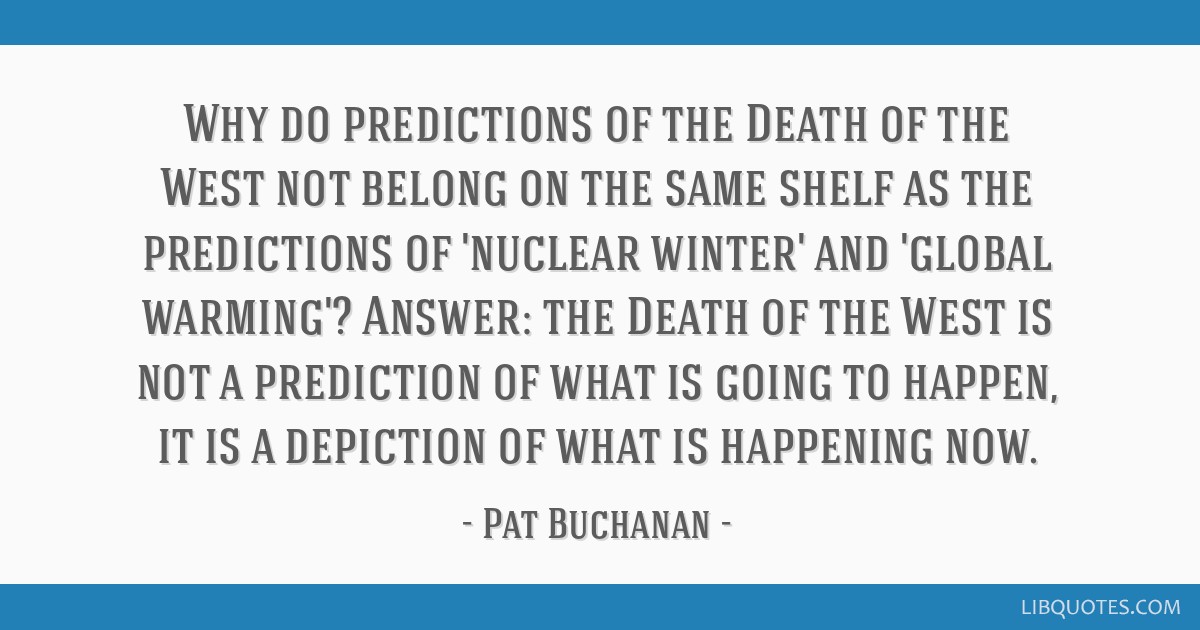 The world that is “now well and truly dead”, you should know, was co-created by British political visionary Norman Angell, who, in 1910, while serving on the on the council of the Royal Institute of International Affairs, published his monumental work “The Great Illusion”, wherein he introduced the theory that argued that the industrialized nations of his time were too economically interdependent to go to war with one another—a theory quickly adopted as undisputedly true by all the great Western thinkers at that time, but was followed four years later, in 1914, by World War I that claimed tens-of-millions of lives—after which Angell revised his theory in a new 1933 addition of “The Great Illusion” and became the only person to have been awarded the Noble Peace Prize for publishing a book—that was followed six years later, in 1939, with the outbreak of World War II, which claimed tens-of-millions of more lives.

The other co-creator of the world that is “now well and truly dead” was German sociologist Max Weber, who is regarded as among the most important theorists of the development of modern Western society because of his development of the “Modernization Theory”, that attempts to identify the social variables that contribute to social progress and development of societies and seeks to explain the process of social evolution, then impose order on societies using brute force power—and today is best known as “globalization”.

As every adherent to realpolitik knows, theories aren’t fact, and if treated as such will always lead to unintended, and most often disastrous consequences, and whose very definition of “theory” is “a proposed explanation whose status is still conjectural and subject to experimentation, in contrast to well-established propositions that are regarded as reporting matters of actual fact”.

Along with these Western thinkers using their theories as facts to make a world that is “now well and truly dead”, they’ve obliterated science with such things like the Theory of Evolution (The process of general evolution could theoretically be reproduced through experimentation, but it never has been…Though speciation has been demonstrated in laboratories, no event beyond speciation has ever been demonstrated) and the Theory of Gravity (From the National Center for Science Education: All physics textbook should include this warning label: This textbook contains material on Gravity. Universal Gravity is a theory, not a fact, regarding the natural law of attraction…This material should be approached with an open mind, studied carefully, and critically considered).

Why it’s important for you to know about these issues is because of the scientific articles now appearing like “Temperatures On Neptune Are Mysteriously Fluctuating, And It Doesn't Make Sense”, “Shock Result In Particle Experiment Could Spark Physics Revolution”, “An Unexpected Boson Measurement Is Threatening The Standard Model of Physics”, and—most importantly—“What Might Happen If New Physics Theory Rules That Time Does Not Exist?”, wherein it posits:

We plan for the future, in light of what we know about the past.  We hold people morally accountable for their past actions, with an eye to reprimanding them later on.

We believe ourselves to be agents (entities that can do things) in part because we can plan to act in a way that will bring about changes in the future.

But what’s the point of acting to bring about a change in the future when, in a very real sense, there is no future to act for?

What’s the point of punishing someone for a past action, when there is no past and so, apparently, no such action? 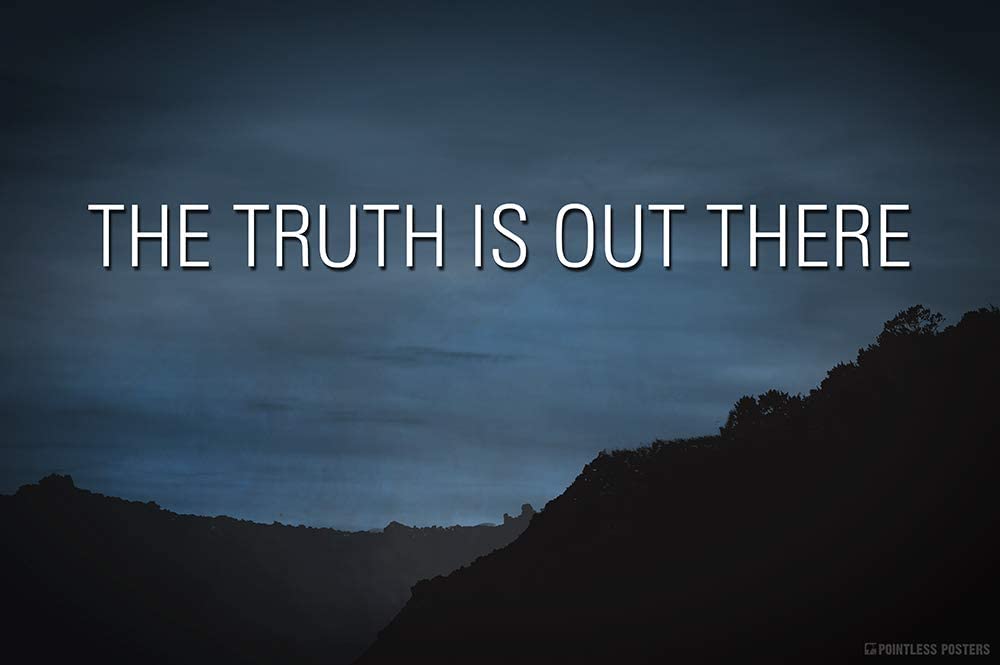 In light of Sister Ciara’s special report “Barely Noticed “17 Acre War” Upends Entire World” sent to you yesterday, wherein a glimpse was seen of the “global consciousness” artificial intelligence device known as Twitter, I believe that the information contained in this letter, when added to the facts in the special report, will give you a firmer basis to understand a deepening mystery that began in 2015—which was when the Center of Theological Inquiry at Princeton University issued a barely noticed press release saying it “is pleased to announce that it has been awarded a grant by the NASA Astrobiology Program to convene an interdisciplinary inquiry into the societal implications of the search for life in the universe”—in 2016, as documented in the article  “How Would Humans Respond To The Discovery Of Aliens? NASA Enlisted Dozens Of Religious Scholars To Find Out”, many of the world’s top religious scholars met at Princeton to examine how world religions would react to the discovery of extraterrestrial life, and found that adherents of religion may be more prepared for otherworldly company—and whose true and real purpose for NASA suddenly summoning the world’s top religious scholars was revealed this past fortnight when it was reported: “An interstellar object exploded over Earth in 2014, declassified government data reveal...Classified data prevented scientists from verifying their discovery for 3 years”.

As you may know, the Hashgochah Pratis (השגחה פרטית) tells us that there is no such thing as chance or coincidence, only Divine Providence, which is the guide the Dear Sisters use to uncover the hidden truths kept from you, and in this present instance, aided by realpolitik and proven facts, not ideology nor theories, are truths now needed more than ever in a world that’s “now well and truly dead”.

To continue their mission of uncovering these hidden truths so you can see what’s really happening, however, the Dear Sisters urgently need your support, which you can provide from the blessings God has given you.

You can, of course, turn away from this plea, but I for one have always found it good advice to travel at night with a light, and when walking a dangerous path find it comforting to have beside me a trusted friend.