An in-depth new Security Council (SC) report circulating in the Kremlin today first noting President Putin began preparing for the successful end of the “Special De-Nazification Operation” in Ukraine this morning by submitting for ratification to the State Duma a protocol on amending Collective Security Treaty Organization (CSTO) peacekeeping activities, with him stating: “The protocol introduces the concept of ‘coordinating state’ and stipulates that under its auspices, the CSTO collective peacekeeping forces would be set up for using in UN peacekeeping operations”, says this was joined by Foreign Minister Sergey Lavrov revealing: “The West refused to cooperate with us on establishing a new European security architecture”, after which he said about the 20 European nations pouring weapons into Ukraine to kill Russian soldiers: “We are extremely concerned about those arms delivery programmes...Everything in this situation is very dangerous, there are no guarantees that there will be no incidents with NATO”, then he warned that “World War III will be nuclear”, and stated: “The next major conflict between world powers will involve atomic armaments and will be catastrophic for the human race”.

With Deputy Foreign Minister Alexander Grushko warning that “there are no guarantees that incidents will not occur” between Russian and NATO forces, and his saying there are no assurances that they “may not also escalate in an absolutely unnecessary direction”, this report notes, it is a warning joined by the Ministry of Defense (MoD) having previously harshly warned that “Russia will perceive any ballistic missile launched at its territory as a nuclear attack that warrants a nuclear retaliation”—are warnings now joined by reports like: “Russia further elevated concerns about global catastrophe on Tuesday as its nuclear submarines sailed off for drills in the Barents Sea and mobile missile launchers roamed the snow forests in Siberia”—and are warnings that were heeded by the United States yesterday, when it saw US Defense Secretary Lloyd Austin ordering the Pentagon to postpone a planned test launch of an intercontinental ballistic missile, and whose Pentagon statement reads: “In an effort to demonstrate that we have no intention in engaging in any actions that can be misunderstood or misconstrued, the secretary of Defense has directed that our Minuteman III intercontinental ballistic missile test launch, scheduled for this week, to be postponed”.

Security Council Members in this transcript note that the Defense Internet NOTAM Service operated by the Pentagon had not previously made an announcement about this ICBM test launch, which is a “notice to airmen” informing pilots of a missile launch and its intended path, and if launched without this NOTAM notice, most certainly it would have warranted a full Russian nuclear response—thus meaning that at least someone in the Pentagon was sane enough to stop this launch—and is sanity always displayed to the world by the MoD, some of whose latest urgent war bulletins include:

“ 498 Russian servicemen have been killed and nearly 1,600 wounded during the ongoing assault on Ukraine”.

“Ukrainian army units and far-right paramilitaries have reportedly lost at least 2,870 soldiers, while a further 3,700 have sustained various wounds...572 Ukrainian servicemen have been taken prisoner”.

“The command of Ukraine’s Special Operations Forces released a statement threatening that all Russian soldiers will be killed, including those who try to surrender, and exactly states: ‘From now on, there will be no more captured Russian artillerymen...There will be no mercy’ ”.

“As many as 1,612 targets have been hit since the start of the operation by Russian Military forces, including 62 command posts and communications centers, 39 S-300, Buk M-1 and Osa missile systems and 52 radar stations...49 aircraft were destroyed on the ground and another 13 in the air…A total of 606 tanks and other armored combat vehicles, 67 multiple rocket launchers, 227 field artillery pieces and mortars, 405 military motor vehicles and 53 unmanned aerial vehicles were also destroyed”.

“The United Nations says that the number of people sent fleeing Ukraine topped 1 million on Wednesday, the swiftest refugee exodus this century”.

“The Russian military delivered a shipment of humanitarian cargo from the Belgorod region to the territory of the Ukrainian settlements near the Russian-Ukrainian border in the Kharkiv region. Humanitarian aid totaling over 30 tonnes has been delivered to Volchansk and Cossack Lopan from the neighboring Belgorod region at the request of the local population”.

On the economic war front, this report continues, Russia announced today that it will stop deliveries of 24 rocket engines to the United States and end its cooperation on experiments at the International Space Station between the countries—today the Russian Grain Union announced that shipments from Russia have more than halved due to traffic restrictions in sea and river ports, and stated: “Before the current situation, daily shipments of grain from Russia amounted to 100,000 tons...Now the volume is less than 40,000 tons”, that caused the price of wheat to soar to a 14-year high—today  European prices for natural gas spiked to nearly $2,280 per 1,000 cubic meters on Thursday for the first time in market history—today Oil prices soared past $118-a-barrel for the first times since 2013—today Russia refuses to launch the next batch of OneWeb internet satellites, a London-based satellite startup partly owned by the British government—and today the Russian Central Bank announced that Russia is now exclusively a ruble country, which means neither citizens, nor companies will be able to pay in foreign currency.

With the European Union preparing a fourth package of sanctions against Russia and European finance ministers saying they will take unspecified measures to prevent Russia from using crypto technologies to dodge the financial sanctions, this report details, it caused Foreign Ministry spokeswoman Maria Zakharova to warn that Berlin’s decision to stop certification of the Nord Stream 2 project will cause irreversible damage to Russian-German relations, and states: “We believe this is a classic precedent of using the commercial project as the political weapon against us, which the collective West at large and official Berlin, in particular, are so fond of blaming Moscow for”—a warning quickly followed by France advising all of its citizens to immediately leave Russia—after which French President Emmanuel Macron gave a nationwide address to his citizens telling them: “The events in Ukraine and sanctions against Russia will have lasting consequences for the continent as a whole, signaling the change of an era”—and is a “change of an era” known about by Chairman Jerome Powell of the United States Federal Reserve Bank, who yesterday, effectively told American lawmakers to begin preparing for a world with more than one reserve currency.

Not being explained to the American people about the “Special De-Nazification Operation” in Ukraine ordered by President Putin, this report notes, is why Foreign Minister Lavrov had to state yesterday: “We are ready for the second round of the negotiations, but the Ukrainian side is playing for time on the United States order”—and whose reason for stating is because of the “Afghanistan Gambit”, that’s best described as: “Davos has refused to let President Zelensky surrender because if he does then legally there is no more war to sanction Russia with…It’s not Putin’s War at that point, it is a settled conflict and terms negotiated”.

Also not being explained to the American people, this report continues, is the factual reality that Russia not only expected massive Western sanctions, it wanted them, most specifically the one economic experts are calling “the biggest hammer in the toolshed”, which was the freezing of the Russian Central Bank’s foreign reserve assets—in truth, however, like in all global central banks, foreign reserve holdings do not actually belong to the host nations, they belong to creditors, and in this instance Russia can’t pay them, but doesn’t matter because the creditors are Western banks, stock holding companies, financers, corporations, etc.—around the world top economic experts are posting warning messages like “Never seen weaponization of money on this scale before…you only get to play the card once…China will make it a priority to need no US Dollar before going for Taiwan…It’s a turning point in monetary history: the end of US Dollar hegemony and the acceleration towards a bipolar monetary order” and “Both sides probably do not know how fragile the Eurozone banking system is, with both the European Central Bank and its national central bank shareholders already having liabilities greater than their assets…In other words, rising interest rates have broken the Euro system and an economic and financial catastrophe on its eastern flank will probably trigger its collapse”—when facing an economic crisis like this in the 1930s, it saw the United States confiscation all of the gold owned by its citizens to keep the US Dollar from collapsing—and is an international money war the Russian Finance Ministry responded to yesterday by eliminating all VAT taxes for the purchase of gold, which simply means that Russia has now, in effect, begun the remonetization of gold for domestic purposes, and by removing the VAT on gold purchases Russian citizens can now offset their currency risk with gold and stabilize the domestic monetary situation.

With global economic experts today noting such things like “Much of NATO’s in-country assets in Ukraine have been neutralized…And you know this because the propaganda and rhetoric have been so thoroughly crude, cartoonish and strident...Ask why the financial and informational war has been so intense?”, this report concludes, the most astute of them correctly assess that Russia’s true goal in this conflict is “nothing less than breaking the back of Davos and their agents in the United States and United Kingdom who have tormented Russia for more than a century”—sees one expert assessing: “If Putin is smart, which he is, he will offer the Poles Lviv and Hungary Transcarpathia. The EU gets the dregs”--.and sees another expert revealing:

If the US/NATO respond with some kind of guerilla war here to hang like an albatross around Putin’s neck, as we should expect, then is in big trouble financially.

Because the financial war will keep escalating as Putin responds militarily.

Remember, he’s openly threatened the ‘decision makers’ here.   And no amount of mealy-mouthed CIA/MI6 disinformation will deter him from action anymore.

This is always what I meant by “spooks start civil wars, militaries end them”.

This isn’t a war for , it’s a war for the future of the entire world.  represents the hill both Davos and have chosen to live or die on. 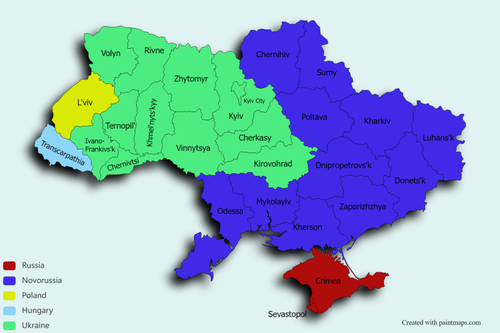 March 3, 2022 © EU and US all rights reserved. Permission to use this report in its entirety is granted under the condition it is linked to its original source at WhatDoesItMean.Com. Freebase content licensed under CC-BY and GFDL.