A forewarning new Security Council (SC) report circulating in the Kremlin today first noting President Putin grimly revealing that “It’s practically impossible to establish security in Ukraine’s war-torn regions” due to Nazi forces, with his stating: “Instead of responding to his people’s request for peace, President Zelensky came to power and, rather than fulfilling them, he, like his predecessors, fell under the influence of radical elements – as they say in Ukraine, Nazis”, says fully complicit in this support for Nazi forces in Ukraine is the regime of Supreme Socialist Leader Joe Biden, and as just confirmed by the head of the Ukrainian Presidential Office Andrei Yermak, who revealed: “We regularly coordinate our actions with the American partners...I personally, for example, quite often get in contact with US National Security Advisor Jake Sullivan and we have a relationship of trust”.

The “relationship of trust” existing between the United States and Ukraine, this report notes, was demonically put on full display this past fortnight when they became the only two nations in the world to vote against a United Nations resolution condemning Nazism—a United Nations resolution put forth by Russia, that lost up to 27-million citizens who died fighting the German Nazis during World War II, as opposed to the United States, that only lost 407,000 of its citizens fighting against both the German Nazis and the Empire of Japan.

Kept suppressed from the knowledge of the American people, this report details, is the factual reality that the United States financed Nazi Germany both prior to and during World War II—specifically its largest corporations like Ford and General Motors, that kept reaping profits from Nazi Germany as American soldiers were dying fighting against it on European battlefields—saw Ford using slave labor at its Nazi German production plants—and whose further shocking revelations include:

The relationship of Ford and GM to the Nazi regime goes back to the 1920s and 1930s, when the American car companies competed against each other for access to the lucrative German market.

Hitler was an admirer of American mass production techniques and an avid reader of the antisemitic tracts penned by Henry Ford.

“I regard Henry Ford as my inspiration,” Hitler told a News reporter two years before becoming the German chancellor in 1933, explaining why he kept a life-size portrait of the American automaker next to his desk.

Documents show that the parent companies followed a conscious strategy of continuing to do business with the Nazi regime, rather than divest themselves of their German assets.

Less than three weeks after the Nazi occupation of in March 1939, GM Chairman Alfred P. Sloan defended this strategy as sound business practice, given the fact that the company's German operations were “highly profitable.”

The importance of the American automakers went beyond making trucks for the German army.

The Schneider report, now available to researchers at the National Archives, states that American Ford agreed to a complicated barter deal that gave the Reich increased access to large quantities of strategic raw materials, notably rubber.

When American GIs invaded in June 1944, they did so in jeeps, trucks and tanks manufactured by the Big Three motor companies in one of the largest crash militarization programs ever undertaken.

It came as an unpleasant surprise to discover that the enemy was also driving trucks manufactured by Ford and Opel -- a 100 percent GM-owned subsidiary -- and flying Opel-built warplanes.

When the Army liberated the Ford plants in and , they found destitute foreign workers confined behind barbed wire and company documents extolling the “genius of the Fuehrer,” according to reports filed by soldiers at the scene. A Army report by investigator Henry Schneider dated Sept. 5, 1945, accused the German branch of Ford of serving as “an arsenal of Nazism, at least for military vehicles” with the “consent” of the parent company in .

In March-2020, this report continues, the Australian Strategic Policy Institute published a shocking document showing that 83 of the largest corporations in America were using slave labor at their production facilities in China—that was followed in January-2021 by the New York Times article “Nike And Coca-Cola Lobby Against Xinjiang Forced Labor Bill”, wherein it revealed: “Nike and Coca-Cola are among the major companies and business groups lobbying Congress to weaken a bill that would ban imported goods made with forced labor in China’s Xinjiang region”.

Facing enormous pressure from human rights organizations, this report details, socialist leader Biden was forced this week to sign into law a bill that effectively bans all imports of goods made by slave labor from China’s Xinjiang province—when losing its Chinese slave labor saw America’s largest chip maker Intel releasing the groveling statement: “We apologize for the trouble caused to our respected Chinese customers, partners and the public…Intel is committed to becoming a trusted technology partner and accelerating joint development with China”—then it saw Foreign Ministry spokeswoman Maria Zakharova revealing that Biden has flooded Ukraine with as many as 10,000 Western military advisors, 4,000 of whom are Americans—after which Foreign Minister Sergey Lavrov warned of a potential “large-scale conflict in Europe”, and grimly stated: “The policy of dragging Kiev into NATO with the prospect of missile strike systems appearing near our borders poses unacceptable threats to Russian security, provoking serious military risks for all parties involved, up to and including large-scale conflict in Europe”.

As the world has witnessed for well over a century, this report concludes, American corporations prey upon economic collapsed nations like Nazi Germany and Communist China, whom they descend upon like locusts to support totalitarian regimes that provide in return unlimited slave labor—once these nations become prosperous it then sees them being destroyed by American military power, and whose next planned victim is Ukraine—but whose most formidable obstacle now standing in their way is President Putin and the Russian Federation, whose bitter lesson learned in World War II has never been forgotten—which is why President Putin has just warned: “I have spoken about the 'red lines' which we believe should not be crossed…I want everyone to understand, here in our country and abroad, so that our partners understand: The issue isn't about the line which we don't want someone to cross…The issue is that we have nowhere to fall back to…They have squeezed us against such a line that we can't move around”—if this warning isn’t heeded, President Putin states “There will be a response”—whose response will be war, about which President Putin will only reveal: “It may vary...It will depend on the proposals that our military experts will make to me”—a revelation of looming war coming from a President Putin who’s already warned: “Fifty years ago, the streets of Leningrad taught me one thing: If a fight's inevitable, you must strike first”.  [Note: Some words and/or phrases appearing in quotes in this report are English language approximations of Russian words/phrases having no exact counterpart.] 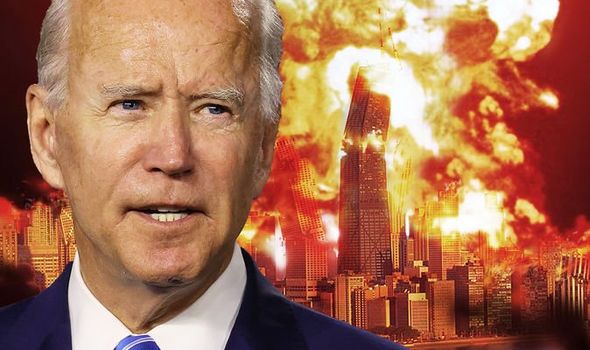 December 26, 2021 © EU and US all rights reserved. Permission to use this report in its entirety is granted under the condition it is linked to its original source at WhatDoesItMean.Com. Freebase content licensed under CC-BY and GFDL.