“My people are destroyed for lack of knowledge...”

Book of Hosea—written by one of the twelve minor prophets in the Hebrew Bible, and as a book in its own right in the Christian Old Testament; cited quote is from Chapter 4, Verse 6.

My interest was aroused today over an avalanche of articles appearing in the American media having headlines like: “‘The Guy Should Be Fired On The Spot’: Fauci Rebukes Fox News Host Over Violent Rhetoric”, “Fauci Says Fox News Host Jesse Watters Should Be Fired For ‘Ambush’ And ‘Kill Shot’ Comments” and “Fauci Wants Fox Host ‘Fired On The Spot’ For Urging Fans To ‘Ambush’ Him With ‘Kill Shot’”—all of which followed Dr. Anthony Fauci appearing on CNN to demand Fox News host Jessie Watters being fired, and saw him stating: “You have some guy out there saying that people should be giving me a kill shot to ambush me?...I mean, what kind of craziness is there in society these days?”.

What made me interested about this issue was, a few weeks ago, Dr. Fauci responding to a question about he how felt about Republican senators calling for his prosecution, and saw him answering: “I have to laugh at that…I should be prosecuted?...So it’s easy to criticize, but they’re really criticizing science because I represent science...That’s dangerous...To me, that’s more dangerous than the slings and the arrows that get thrown at me…I’m not going to be around here forever, but science is going to be here forever...And if you damage science, you are doing something very detrimental to society long after I leave... And that’s what I worry about”.

By Dr. Fauci saying “I represent science”, one can only conclude he knows its definition is “the state of knowing—knowledge as distinguished from ignorance or misunderstanding”—and one can also conclude that Dr. Fauci knows that to achieve a “state of knowing” in order to dispel ignorance and misunderstanding, the steps of the “Scientific Method” must be applied—which are: Step 1: Ask a question…Step 2: Do background research…Step 3: Construct a hypothesis…Step 4: Test your hypothesis by doing an experiment…Step 5: Analyze the data and draw a conclusion. ... Step 6: Share your results.

In my applying the “Scientific Method” to achieve a “state of knowing” about this issue, the only conclusion that can be drawn is that Dr. Fauci is, at best, a liar, and at worst is a deeply disturbed person needing urgent mental health care— is a conclusion based on the results I’ll share with you showing that: 1. Jessie Waters is a long-time employee of Fox News whose career began with his doing “ambush interviews” for the Bill O’Reilly show of public officials hiding their secrets, and as documented in articles like “Gotcha TV: Crews Stalk Bill O’Reilly’s Targets”—and—2. Jessie Waters gave a lecture to young college students about this journalist practice, wherein he said: “You got to ambush a guy like Fauci. OK, this is how you do these ambushes like O’Keefe…You got to be respectful because they’ll turn the tables on you and you can’t have it blow up in your face...The kill shot with an ambush, deadly, because he doesn’t see it coming…This is when you say…Dr. Fauci, you funded risky research at a sloppy Chinese lab, the same lab that sprung this pandemic on the world”—and is the same conclusion reached by Fox News, who in their statement said:

Based on watching the full clip and reading the entire transcript, it’s more than clear that Jesse Watters was using a metaphor for asking hard-hitting questions to Dr. Fauci about gain-of-function research and his words have been twisted completely out of context. 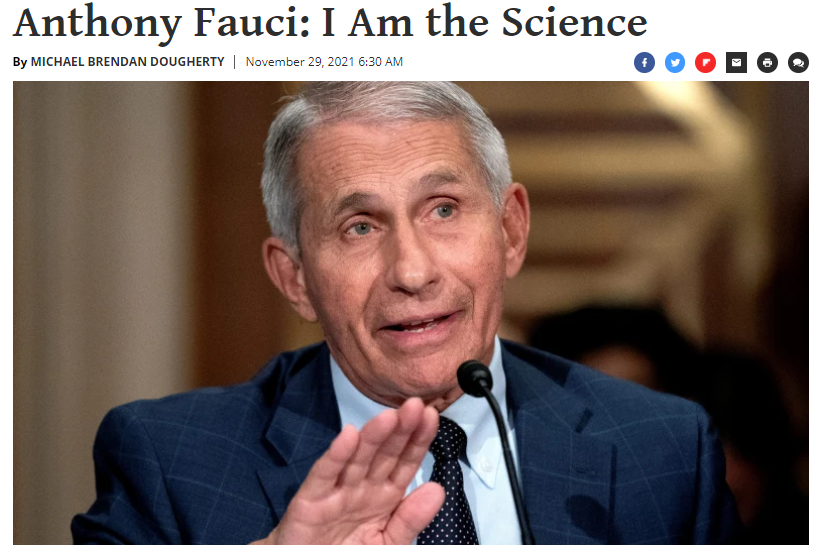 I find it horrifying to contemplate my conclusions about Dr. Fauci because his decisions directly affect the lives of millions of people, and I find it even more disturbing he’s being aided by a media that should know better than to be purveyors of outright lies and blatant dishonesty.

While contemplating these issues, I remembered Professor Grant Farred, Ph.D., a noted contemporary black philosopher, born in South Africa, who teaches at Cornell University, in Ithaca-New York—and whose life unexpectedly collided with Martin Heidegger, a key German philosopher of the 20th Century and member of the Nazi Party, and in whose book “Being and Time”, that the New York Times book review said about “Being and Time changed the course of philosophy”, wrote: “There are human beings and human groups (Negroes like, for example, Kaffirs) who have no history…however, animal and plant life has a thousand year long and eventful history…within the human region, history can be missing, as with Negroes”.

In the fall of 2013, while he was raking leaves outside his home, a white woman stopped by and asked Professor Farred, “Would you like another job?”, obviously mistaking him for a paid gardener of the family she assumed lived in the house—Professor Farred sarcastically responded: “Only if you can match my Cornell faculty salary”.

Though replying sarcastically, the humiliation Professor Farred experienced forced him to reexamine all of his most cherished and closely held assumptions, and whose journey of self discovery led him straight to Nazi racist thought leader Martin Heidegger—an incredible journey Professor Farred chronicled in his book “Martin Heidegger Saved My Life”, and about which he revealed:

Heidegger saved me because he gave me the language to write about race in such a way as I’d never written it before.

Heidegger enabled me to write in this way because he has made me think about how to think.

Of all the philosophers I know and the theorists I read, Heidegger stands apart because he is the only thinker I know who explicitly sets himself the task of thinking thinking. 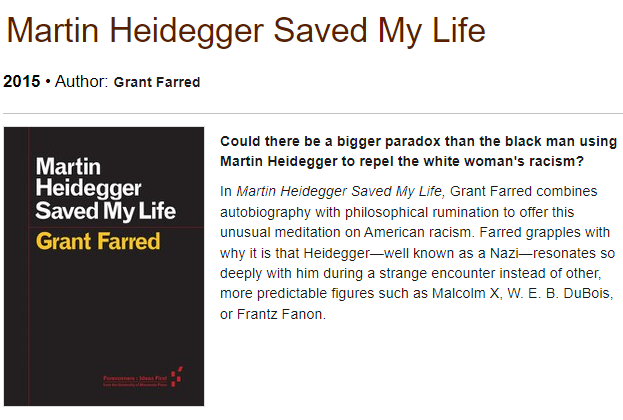 By combining my conclusions about Dr. Fauci with the incredible journey of Professor Farred, this is an exercise meant to enable you to “think about thinking”—that is using thought or rational judgment in the process of using one’s mind to consider or reason about something—is a process using all available information, no matter what the source may be—and stands opposed to propaganda, that is information, especially of a biased or misleading nature, used to promote or publicize a particular political cause or point of view.

In America today, the vast majority of its propagandized citizens have not only forgotten how to “think about thinking”, they’ve stopped thinking, period—and is understandable when knowing what CIA Director William Colby meant when he said: “We own everyone of major significance in the major media”—and---in knowing what CIA Director William Casey meant when he said: “We'll know when our disinformation campaign is complete when everything the American people believe is false”—are truths about what’s really going on known by many, even by those like liberal Hollywood actress Sarah Silverman, who said in despair: “I need a news outlet that's just the facts, something that I can draw my own opinion…It's just facts, and then I draw my own opinion on it…That'd be so nice!...I'd like to draw my own conclusions sometimes”.

As you all know, what those like Ms. Silverman want is exactly what my Dear Sisters provide daily, truth and facts you can draw your own conclusions from—truth and facts like US Senator Joe Manchin killed the Build Back Better legislation because he remembered Chairman of the Joint Chiefs of Staff Admiral Mike Mullen warning in 2011: “The national debt is our biggest security threat”—like the world’s richest man Elon Musk just warning “political correctness is one of the greatest threats to civilization”—like Russia warning today that it’s preparing for a possible conflict with the United States—and like Archbishop Carlo Vigano releasing from the Vatican today a Christmas warning message to the American people about the horrors soon to come if the socialist-globalists aren’t stopped.

Also as you all know, our mission to keep truth and facts flowing to you is entirely based on your support, which without we’d cease to exist.

And is why, as always, I’ll leave you today with the words I’ve left you with before, and are as true right now as they always will be: In the coming months, the dimensions of this looming war are going to shift in radical and unforeseen ways—which is why we believe it is your right to know the full truth about what is happening—a truth the demonic enemies of humanity and our God are doing everything in their power to suppress—which is why our Dear Lord ordered us to band together in such times as these to protect one another—a protection we urgently need at this very moment to keep the truth flowing to you—and in aiding us, our Dear Lord has promised you: “Give, and it will be given to you. A good measure, pressed down, shaken together and running over, will be poured into your lap. For with the measure you use, it will be measured to you.”

(Please note that those who respond to this appeal, in any amount, will receive, at no charge, Sorcha Faal’s December, 2021/January, 2022 lecture series to the Sisters of the Order titled “Total War: the Collapse of the United States and the Rise of Chaos: Part 117”.  This is another one of the Sorcha Faal’s most important lectures dealing with the coming timelines of war, famine, catastrophic Earth changes and disease as predicted by ancient prophecies.)