An informative new Security Council (SC) report circulating in the Kremlin today first noting President Putin sent a congratulatory message to Chinese President Xi Jinping this morning on the 72nd Anniversary of the founding of the People's Republic of China, that states: “I am confident that together, we will continue to boost Russian-Chinese cooperation in various fields in every possible way…It is fully in line with the interest of our peoples and efforts to ensure regional and global security and stability”, says this message follows Pentagon spokesperson Lieutenant Colonel Martin Meiners revealing: “The two sides held a frank, in-depth, and open discussion on a range of issues affecting the US-People’s Republic of China defense relationship”—were “frank and in-depth” discussions wherein the Americans charged that China, not Russia is the greater threat to Kosovo—an absurd charge Russia countered in its ongoing strategic stability talks with the United States—and to keep America from exploding the Balkans into another global conflict like World War I, it saw the European Union ordering its special representative Miroslav Lajcak to begin immediate negotiations with both Serbia and Kosovo, who has now reported: “We have a deal!...After two days of intense negotiations, an agreement on de-escalation and the way forward has just been reached…I thank Besnik Bislimi and Petar Petkovic for their readiness to negotiate and agree for the good of the people”.

Important to note, this report says, is that this failed American attempt to embroil the Balkans in needless conflict came at the same time top Pentagon officials Defence Secretary Lloyd Austin, Chairman of the Joint Chiefs of Staff General Mark Milley and Central Command Commander General Kenneth McKenzie Jr. were testifying in hearings before committees of the US Senate and the US House—hearings wherein Republican Party lawmaker US Congressman Matt Gaetz nailed these officials to the wall by forcing them to admit that “from Syria to Afghanistan, the Pentagon really is chronically bad at winning wars”—after which the leftist Washington Post turned their rage on Supreme Socialist Leader Joe Biden in the article “Our Military Leaders Confirm: Biden Misled America”, that scathingly states: “After two days of testimony by our military commanders on the Biden administration’s disastrous withdrawal from Afghanistan, here is what we have learned: Joe Biden is (as the president once termed a skeptical town hall attendee) “a lying, dog-faced pony soldier””—then saw the leftist New York Times reporting: “Biden’s ratings have fallen more among women than any other demographic group, and the Democrats are losing support among voting groups they generally take for granted”—that was quickly followed by the Wall Street Journal warning: “The White House should be feeling alarm…It hasn’t been a good summer for the president, and it isn’t looking to be a good fall”.

This transcript sees Security Council Members agreeing that the divisions now erupting in the United States between its military establishment and socialist leaders is eerily reminiscent of what occurred in the French Third Republic, that lasted from 1870 to 1940—a government adopted in France when the Second French Empire collapsed during the Franco-Prussian War, and collapsed after France's defeat by Nazi Germany in World War II—was a Franco-Prussian War lost by France, who had to cede many of its territories—was ruled over by the Democratic Republican Alliance, whose modern day counterpart in the United States are socialist Democrats and never-Trump Republicans—and whose despotic rule was marked by the leftist media generated divisions in French society they created, the most infamous of which was the “Dreyfus Affair”.

The “Dreyfus Affair”, this report explains, involved Colonel Alfred Dreyfus, the Jewish French officer who was scapegoated for the crimes of their military establishment and elite officer class, as Dreyfus, despite his rank, was an outsider—saw Dreyfus’s case built around a traitor who was covertly feeding intelligence to the German enemy, though the French military refused to believe that one of their favored officers, one with close access to the elites, would do such a thing—so, they went in search of a sacrificial goat, and found it in Dreyfus—was a political scandal that divided the Third French Republic from 1894 until its resolution in 1906—and whose ending came from one of the most powerful letters ever written  in modern history entitled “J'Accuse...!”, which was an open letter published on 13 January 1898 in the newspaper L’Aurore by the influential writer Émile Zola, that addressed President of France Félix Faure accusing his government of antisemitism and the unlawful jailing of Dreyfus,

In a redux of the “Dreyfus Affair” meant to divide the American people, this report concludes, socialist leader Biden ordered the Pentagon to begin a criminal investigation of US Marine Lance Corporal Hunter Clark, who famously was photographed lifting a baby over the wall at the Kabul airport last month, but whose crime was appearing on stage last week at a President Donald Trump rally where he was cheered by tens-of-thousands, and being out of uniform was allowed to do—that was quickly joined by socialist leader Biden ordering the Pentagon to throw combat war hero US Marine Lieutenant-Colonel Stuart Scheller into a solitary confinement brig because he demanded an apology from his corrupt leaders for their war failures—before he was thrown into the brig saw Biden refusing Lieutenant-Colonel Scheller’s offer to honorably resign his commission—a refusal that caused Lieutenant-Colonel Scheller’s terrified parents to cry out in alarm: “We're fighting a battle here, just like our son, and we are asking America to help us fight...We are in the middle of history...We have one man, our son, who is standing against the military generals, the pentagon and the machine...They want to destroy him!”—a cry of alarm heard by the over two-dozen Republican Party lawmakers in the US Congress that sent a letter to the US Marines demanding Lieutenant-Colonel Scheller’s immediate release from the brig—sees articles now appearing in America like “The Scheller Case is America’s Dreyfus Affair”, that fearfully reveals: “He is held incommunicado, under a gag order, unable even to speak with his parents...Throwing people into solitary confinement has become, it seems, a repeatable tactic to the current Democrat enforcers…Under a previous Administration, and under the close, informed, and watchful eye of the current president, political opponents were arrested in the middle of the night, or had false charges brought against them and their reputations tarnished…People like Roger Stone, General Michael Flynn, Carter Page, George Papadopoulos”—all of which has caused those Americans slowly awakening to the socialist horror fast surrounding them to remember one of their most decorated and distinguished war heroes US Marine Lieutenant-General Chesty Puller, most particularly his famous battle cry: “Take me to the Brig…I want to see the real Marines!”.  [Note: Some words and/or phrases appearing in quotes in this report are English language approximations of Russian words/phrases having no exact counterpart.] 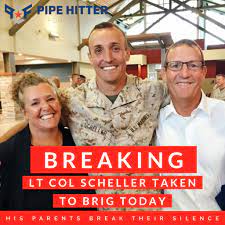 October 1, 2021 © EU and US all rights reserved. Permission to use this report in its entirety is granted under the condition it is linked to its original source at WhatDoesItMean.Com. Freebase content licensed under CC-BY and GFDL.