In William Shakespeare’s play King Henry IV Part I (written in 1597) the famous phrase “The game is afoot!” was coined—a phrase meaning some process has started or is about to start—and came to my mind yesterday because of the events that swiftly followed President Donald Trump sending a demand letter to Texas Governor Greg Abbott stating: “Despite my big win in Texas, I hear Texans want an election audit!...You know your fellow Texans have big questions about the November 2020 Election...Texas needs you to act now...Your Third Special Session is the perfect, and maybe last, opportunity to pass this audit bill...Texans know voting fraud occurred in some of their counties...Let's get to the bottom of the 2020 Presidential Election Scam!”.

The timing of President Trump’s demand is important to notice because it was made near exactly 24-hours before the Arizona State Senate will release its findings regarding the forensic audit of the 2020 Presidential Election in the socialist Democrat Party stronghold of Maricopa County at 1:00 pm (UTC/GMT -7 hours) Mountain Standard Time—which will air and stream live on One America News and the Right Side Broadcasting Network.

Though President Trump has made such demands before to no effect, this one was followed in minutes by the Texas Secretary of State’s office announcing that “a full and comprehensive forensic audit” of the 2020 Presidential Election is underway in Dallas, Harris, Tarrant, and Collin Counties—a shock announcement causing Texas House Democratic Caucus chairman Chris Turner to explode in anger and state: “Let me be the first to congratulate the disgraced former president, Donald Trump, on his apparently becoming the new governor of Texas”.

Within a few hours of this shock announcement coming out of Texas, the American leftist mainstream media began flooding the internet with articles like “Republican Review of Arizona Vote Fails to Show Stolen Election”, “GOP-led Arizona Election Review Closely Matches Biden's Winning Margin” and “Draft Report From Partisan Arizona Review Confirms Biden Defeated Trump In Maricopa County Last November”—none of which, however, bothered to truthfully report on this draft report’s main finding: “The number of illegal ballots found in Maricopa County (more than 55,000) is over 4 times the current amount separating President Trump and Joe Biden in Arizona”—and to counter this tsunami of leftist fake news propaganda, it saw Arizona Senate leader Senator Wendy Rogers posting a message shortly before Midnight stating: “I just talked to Doug Logan via phone…The leaked draft is simply a draft and is only a partial report…Tomorrow's hearing will render findings of great consequence…Then he said “God is in control”…Please pray for our audit team tomorrow as they present their findings”. 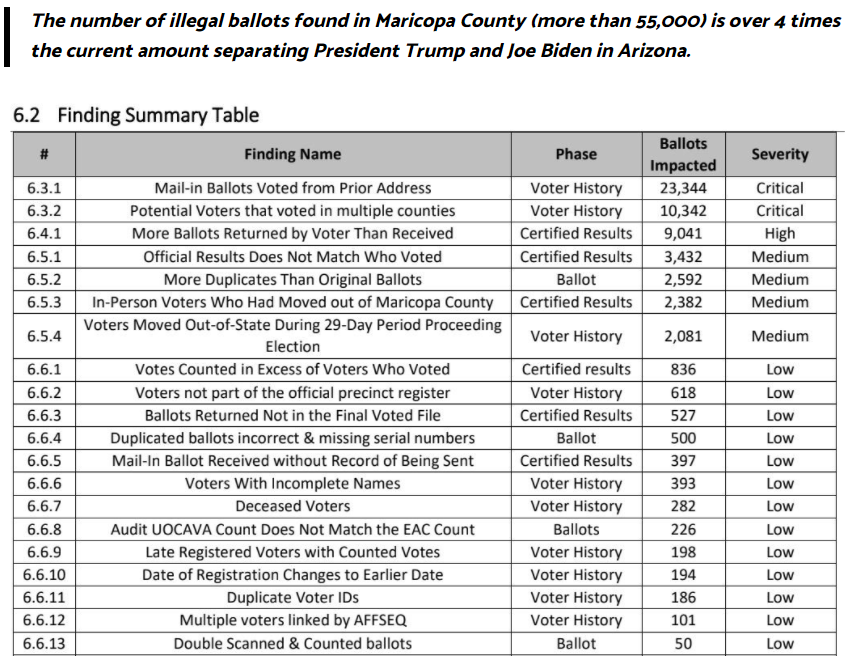 In knowing that “The game is afoot!”, yesterday Sister Ciara gave you an historical parallel to these current events in her letter “Americans Given Bill For Cost Of Freedom—World Wonders If They'll Pay It”, wherein she documented how President John F. Kennedy was subverted and eventually executed by rogue elements in the CIA and Pentagon—a factual history playing out yet again, as evidenced by socialist Democrat Party leader Senator Chuck Schumer gleefully telling President Trump after he was elected: “Let me tell you, you take on the intelligence community, they have six ways from Sunday at getting back at you”—within a week of President Trump being sworn into office it saw Obama-era Pentagon appointee Rosa Brooks releasing the document: “3 Ways To Get Rid Of President Trump Before 2020”—this week saw the Wall Street Journal in their article “Durham Cracks the Russia Case” reporting: “The special counsel’s indictment tells the real story of 2016 collusion...The narrow Sussmann indictment opens another the window on a far greater offense, which was the Clinton team and the media’s dirty trick against U.S. democracy...The indictment alleges that Mr. Elias kept Clinton campaign officials informed about the scam, including the campaign manager, communications director, and foreign policy advisor”—all of which has now been joined with the revelation that Joint Chiefs Chairman General Mark Milley was conspiring against President Trump and secretly colluding with Communist China and socialist Democrats to bring him down, about which it’s said: “Milley has been reduced to a caricature of a caricature right out of “Dr. Strangelove”—and is himself a danger to national security”. 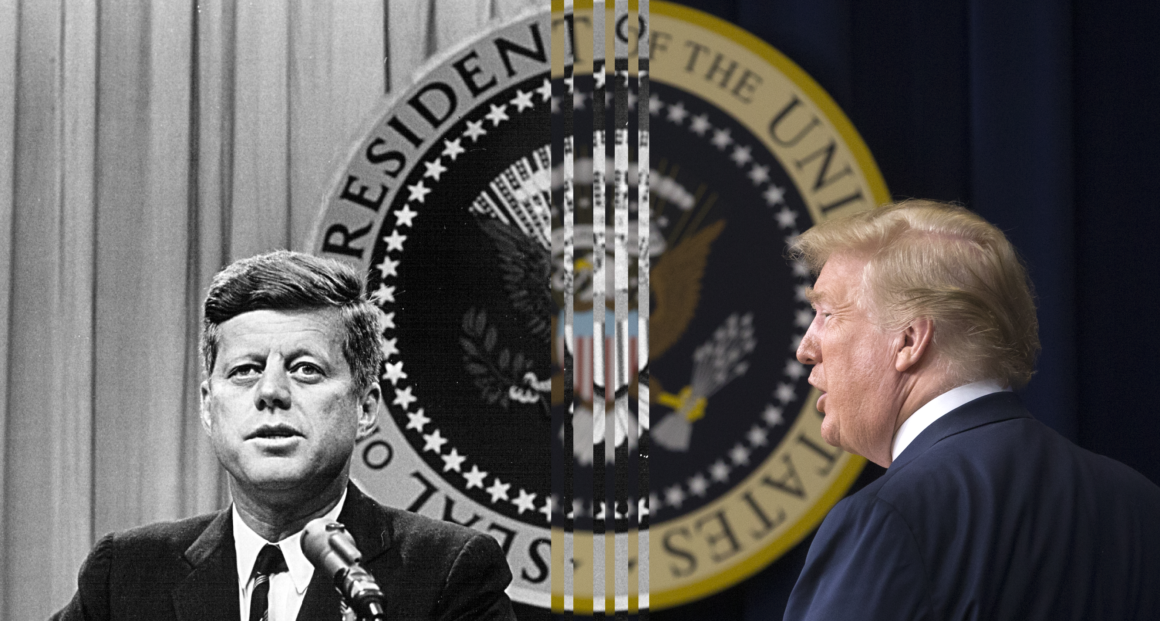 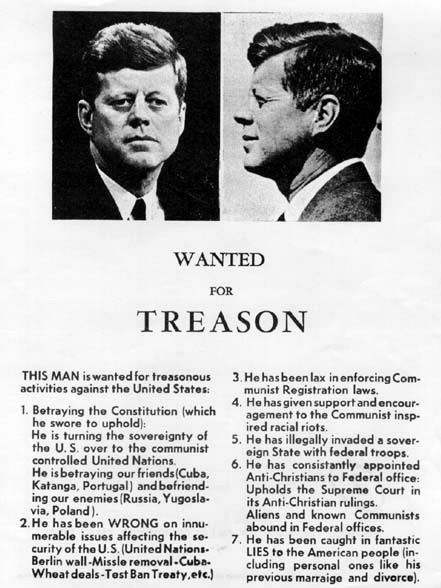 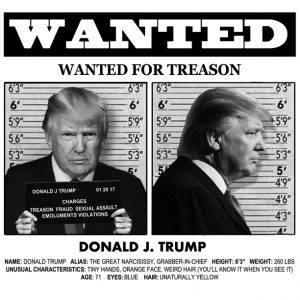 In previous letters to you, I’ve told you the importance about “newspapers of record”, which are major newspapers with large circulations whose editorial and news-gathering functions are considered authoritative, the largest and most important one of which in America is the Wall Street Journal—and is critical for you to know about today, because the Wall Street Journal proclaimed to the entire world this week: “Biden has said, ‘I am a capitalist’ and ‘I am not a socialist.’...Both statements are false...Joe Biden is not a capitalist...He is a socialist...Work, save and invest is a three-word definition of capitalism, which is demonstrably alien now to Mr. Biden’s worldview...He does not acknowledge that the private sector contributes anything positive to the life of Americans, and he is seeking to establish the State control of the means of production”.

I cannot overemphasize the critical importance of the Wall Street Journal making this proclamation, most particularly because it was quickly joined by the United States Chamber of Commerce (the largest lobbying group in the United States, representing over three million businesses and organization) openly declaring that the socialist Democrat Party reconciliation bill in the US Congress “poses an existential threat to US economy”.

No matter how powerful Biden, his socialist Democrats, the leftist media, the CIA and Pentagon may think they are, they don’t stand a chance against the all-powerful and highly-secretive American capitalists who really rule over this country—which is why when I began to see the outlines of this war forming, the warning issued over a century ago by renowned American abolitionist Frederick Douglass at the outset of Civil War came to mind, who said:  “The limits of tyrants are prescribed by the endurance of those whom they oppress”.

Through revisionist history, most Americans ignorantly believe that the Civil War was all about freeing slaves, but in reality this conflict was ignited because American capitalists had “reached their limit of their endurance” while watching Democrats turn the Southern States into a socialist slave oligarchy beneficial only to its white elites—and was a Democrat socialist cradle-to-grave slave system cutting into the profits made by the American capitalists that were unable to sell their products to imprisoned black slaves.

Also quickly understanding the outlines of this war is Socialist Democrat Party tyrant Governor Gretchen Whitmer of the State of Michigan, who last year banned her citizens from buying seeds and gardening supplies, but in knowing what’s soon to come, this week saw her signing a new law banning anyone from forcing masks and vaccine mandates on citizens.

As to what socialist Democrat Party tyrants like Governor Whitmer know about what’s coming for them, you first need to know that the United States is a constitutional republic comprised of 50 States, and today sees 26 of these States controlled by the Republican Party—are Republican States that have spent this year passing laws to fully arm their citizens—and four days ago, on 20 September, it saw the governors of these 26 Republican States issuing a demand letter to Biden to meet with them within 15-days, which says: “As chief executives of our states, we request a meeting with you at The White House to bring an end to the national security crisis created by eight months of unenforced borders...The months-long surge in illegal crossings has instigated an international humanitarian crisis, spurred a spike in international criminal activity, and opened the floodgates to human traffickers and drug smugglers endangering public health and safety in our states...A crisis that began at our southern border now extends beyond to every state and requires immediate action before the situation worsens...The negative impacts of an unenforced border policy on the American people can no longer be ignored...Due to the emergent crisis, we respectfully request a meeting as soon as your schedule allows within 15 days...While we know your responsibilities as Commander in Chief are substantial, ending the national crisis and securing our states must be a priority”.

For those of you doubting such a thing will ever happen, let me assure you that American history proves, beyond any doubt, that this is the most likely scenario to occur—and keep in mind, there are about 11.4-million deer hunters in the United States, which amounts to more armed people skilled in stealth warfare then the world’s ten largest armies all combined.

A good forewarning article you can read is “The Left Cheered When Australians Gave Up Their Guns. Now They’re Being Shot By Their Own Government In The Streets”—and for you Americans, of course they’re coming for you next—and as best aptly explained in the article “It’s A ‘Fourth Turning’, What Did You Expect?”.

I’ll end today with the reminder that American Founding Father John Adams left a message for you saying: “You will never know how much it has cost my generation to preserve YOUR freedom…I hope you will make a good use of it”—a wise reminder the Dear Sisters keep hourly in their hearts while they fight for you behind and on the front lines of this war—which is why I plead for you to aid them, or others like them, in this urgent hour of need—and in doing so, would, indeed, “make good use” of the freedom you have that others are sacrificing their lives to keep secure on your behalf.