A captivating new Security Council (SC) report circulating in the Kremlin today first noting that the West’s campaign to topple the Syrian government is all but over after the so-called “cradle of the revolution” against President Bashar al-Assad was liberated due to agreements reached between President Putin and the governments of Israel and Jordon, says soon to follow will be the estimated 2,500 American troops being ejected from Iraq, thanks again to President Putin brokering an agreement between this region’s Kurdish peoples and its Iranian and Syrian adversaries—a restoration of peace to the Middle East quickly met by Supreme Socialist Leader Joe Biden sending forth his Under Secretary of Defence for Policy Colin Kahl to scream: “In the coming years, Russia may actually represent the primary security challenge that we face in the military domain for the United States and certainly for Europe…Russia is an increasingly assertive adversary that remains determined to enhance its global influence and play a disruptive role on the global stage, including through attempts to divide the West”.

As to how Russia restoring peace to the Middle East can in any way whatsoever be construed as “attempts to divide the West”, this report notes, the socialist Biden Regime has yet to explain to anyone—nor do they intend to, specifically because America has been rampaging across the world in defense of what they call their “rules based liberal international order” only they can define, but whose real sole purpose is intended to make the United States a global hegemon in charge of everything and everyone—and stands directly opposed to the “multilateral international order” supported by Russia and China, which is an alliance of multiple countries pursuing common peaceful goals in the form of membership in international institutions (near exclusively business and trade related, not military), serves to bind powerful nations, discourage unilateralism, and gives small powers a voice and influence that they could not otherwise exercise.

With the United States, United Kingdom and Australia treacherously blindsiding France in their secret AUKUS nuclear military agreement against China, this report details, socialist leader Biden is now watching as his “rules based liberal international order” world unravels after French Foreign Minister Jean-Yves Le Drian and his Indian counterpart, Subrahmanyam Jaishankar pledged yesterday that France and India “will defend a truly multilateral international order”—a pledge quickly joined by French Secretary of Foreign Affairs Clement Beaune slamming the United Kingdom for abandoning Europe, who he said “returned to the American fold with an accepted form of vassalisation”—after which he urged Europe to “strengthen its capacities for reflection, strategic autonomy, and defence”, then declared: “Why would the Americans ensure our defence in the matter?...It's up to us to do it!”.

This transcript sees Security Council Members agreeing that the chaos socialist leader Biden has upended the world with is part subterfuge mixed with huge amounts of hubris—specifically because socialist Democrats and their leftist propaganda media lapdogs are using the chaotic mess Biden has made of the world in eight short months to keep the American people distracted from their plan to “strike a fatal blow” against the government-limiting philosophy of President Ronald Reagan that has largely defined American politics since the 1980s—a “fatal blow” which, if successful, would see Biden’s far-reaching attempt resulting in a presidency-defining victory that delivers on a decades-long campaign by Democrats to expand the federal government in order to “hook a whole new generation of the poor on government dependency”—and sees it being reported today: “No president has ever packed as much of his agenda, domestic and foreign, into a single piece of legislation as President Biden has with the $3.5 trillion spending plan that Democrats are trying to wrangle through Congress over the next six weeks”.

Presently standing in the way of this “next six weeks” deadline for Biden and his socialist Democrats plan to change America forever, this report continues, is conservative Democrat Party lawmaker US Senator Joe Manchin, who this week dealt a blow to Biden saying that he won’t support this plan at this time—though most critically to notice is that Biden and his socialist Democrats don’t have weeks, as at this very moment they have just 11-days to avert an actual economic doomsday—is an “economic doomsday” about to strike on 30 September, which is when the US Congress must raise the debt ceiling or shut the government down—sees Senate Republican Minority Leader Mitch McConnell warning: “Let me make it perfectly clear…The country must never default…The debt ceiling will need to be raised…But who does that depends on who the American people elect”—sees top Republican lawmaker Senator Susan Collins stating: “The Democrats have added enormous amounts of debt, including the $1.9 trillion package, now $3.5 trillion on top of that, so they bear the responsibility for increasing the debt limit”—sees it being reported: “No one is certain of the exact timing of all this…The latest estimates, from Treasury Secretary Janet Yellen and private market analysts, suggested the government would run out of maneuvers to juggle the books by late October”—and with not a single Republican in the 50-50 divided Senate willing to help these socialist Democrats, it’s been revealed today: “Democrats plan to attach the debt-ceiling issue to the legislation to keep the government funded, a deadline that hits Sept. 30…If Republicans block that measure, over the debt issue, the government would shut down the next day…Democrats acknowledge, for now, that they have no real fallback plan if McConnell and Senate Republicans hold the line and drive the nation into a shutdown or a debt crisis — other than trying to shame McConnell into upholding his previous positions”.

In a truly pathetic attempt to keep the American people distracted from this “economic doomsday” that’s fast approaching, this report details, Biden and his socialist Democrats, along with their leftist propaganda media lapdogs, spent the past fortnight terrorizing their indoctrinated followers with fairy tales about a right wing insurrection that was supposed to happen yesterday—a supposed insurrection in support of the 6 January political prisoners thrown into the American Gulag that Biden and his socialist forces prepared for by throwing a fence around the US Capital and then surrounding it with thousands of heavily armed storm troopers—though like all socialist fairy tales saw these storm troopers and leftist media idiots outnumbering the handful of actual, and mainly elderly protesters that showed up—saw protesters being so scarce that reporters and television news crews began queuing up in long lines to obtain interviews from them—and whose only armed person detained by storm troopers was an undercover officer whom they quickly led away while being filmed.

At the exact same time this fairy tale insurrection was being exposed to the American people for the lie it was, this report notes, thousands of real protesters took the streets of New York City slamming the Nazi rules they’re forced to live under while chanting “Fuck Joe Biden” and “We Will Not Comply!”—for the third week in row saw collage football fans chanting “Fuck Joe Biden” in stadiums all across America—is a growing mass rebellion against socialist Covid edicts coming in the same week that doctors and experts testified at an FDA hearing warning that Covid shots are dangerous and are killing more people than they save—an explosive FDA hearing that led to it being observed: “It is claimed that vaccines are remarkably effective, and that the vaccinated must also be protected from the unvaccinated…How can both claims be true at the same time?...They can’t”—an observation quickly followed by the former Vice-President of the World Health Organization European Advisory Group grimly warning: “Unvaccinated people are not dangerous; vaccinated people are dangerous and should be quarantined”—a grim warning then joined by the State of Florida shockingly reporting: “More than half the patients getting the monoclonal antibody treatment for Covid in south Florida are fully vaccinated”—all of which makes it no surprise that famed Black rapper Bia just joined the “Internet Holy War” against Biden’s insane experimental vaccine Covid mandates ignited by Black rapper Nicki Minaj, and who yesterday posted to her millions of devoted followers: “STOP listening to the government and media and understand information is public Knowledge…You only have ONE body and it's YOURS…S/O TO @nickiminaj for opening my eyes…The whole world is asking questions”.

Through the first eight months of this year, this report concludes, American officials have stopped 1,323,597 illegal migrants attempting to cross the US-Mexico border—numbers further exploding this week in the “BIDENVILLE SLUM” in Texas that now holds nearly 15,000 illegal migrants—an actual invasion of America coming at the same time socialist leader Biden is vowing to protect the border of Tajikistan from illegal Afghan migrants—an insane policy that joins Biden telling the American citizens trapped behind enemy lines in Afghanistan that they can leave the country if they first go to a US Embassy in a neighboring country to get the proper papers they need to leave Afghanistan—a policy of such insanity it could only have been thought up by lunatic Chairman of the Joint Chiefs of Staff General Mark Milley, who its just been revealed downplayed last years BLM riots that caused multiple deaths and billions-of-dollars in property damage because he was afraid President Trump would invoke the insurrection act to protect American lives and property from socialist mobs—is the same lunatic General Milley that proclaimed as “righteous” the drone strike that murdered 10 innocent Afghan civilians, including 7 children—was a murderous drone strike the CIA is now reporting they warned the US military would kill innocent children—though to how truly insane the American military has become under the leadership of General Milley, it was put on full display for the entire world yesterday when the United States Southern Command posted a graphic to celebrate the 74th Birthday of the US Air Force, and about which its now being noted: “Thanks, comrades!...US SOUTHCOM amuses Twitter followers with pic celebrating US Air Force birthday featuring RUSSIAN warplanes”.  [Note: Some words and/or phrases appearing in quotes in this report are English language approximations of Russian words/phrases having no exact counterpart.] 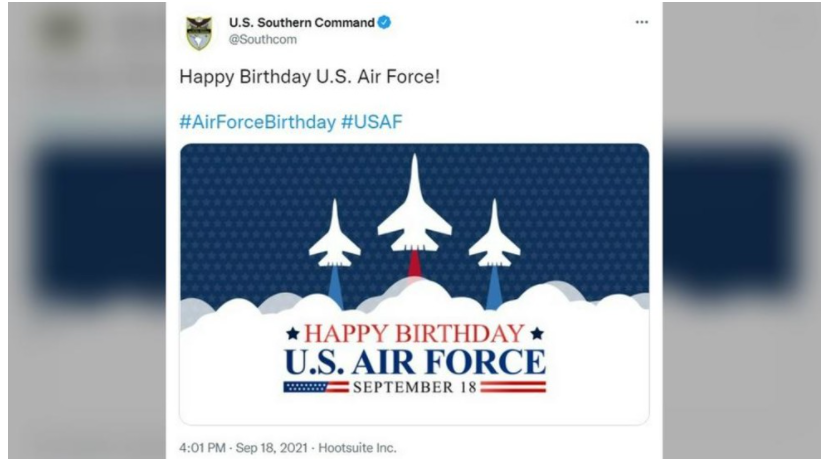 Supreme Socialist Leader Biden and General Mark Milley have so corrupted the American military they no longer know the difference between Russian Sukhoi Su-27 twin-jet fighters (pictured in silhouette above) and their own.

September 19, 2021 © EU and US all rights reserved. Permission to use this report in its entirety is granted under the condition it is linked to its original source at WhatDoesItMean.Com. Freebase content licensed under CC-BY and GFDL.