An in-depth new Security Council (SC) report circulating in the Kremlin today discussing issues related to the Putin-Biden Summit scheduled to take place in Geneva-Switzerland on 16 June, first notes President Putin stating: “If after this meeting we create mechanisms of work in all these areas, it seems to me that it would be good…It could be said that the meeting has been useful”—after which President Putin extended an olive branch to Supreme Socialist Leader Joe Biden to aid the global fight against cyber criminals, with his declaring: “If we agree on the extradition of the criminals, then Russia, of course, will do it - but only if the other side, in this case, the United States, agrees to do the same and will extradite similar criminals to the Russian Federation”.

In response to this olive branch, however, this report notes, leftist American news sources began reporting: “A key goal for the White House coming out of the meeting scheduled for Wednesday will be to convey that Biden delivered a strong message to Putin, in contrast to the chummy relationship former President Donald Trump projected after his first sit down with Putin”—a White House goal having no basis in reality, as the sanctions and policies against Russia enacted by President Trump drastically lowered global energy prices to the detriment of the Russian economy, while the policies of Biden have exploded global energy prices to fill Russian gold coffers to the point of overflowing.

Also in response to this olive branch, this report details, socialist leader Biden ordered the Pentagon to announce a $150-million defense allocation for Ukraine to help bolster its borders against Russia—a Ukraine the Obama-Biden regime destroyed to make it a battering ram to be used against Russia and turning the country into a nightmare for its citizens—then saw it being announced that Biden would hold a solo press conference to avoid the risk of mistakes and keep control of narrative—a narrative to be explained to the over 1,000 reporters seeking credentials for this summit—but after the talks are over, President Putin will first appear before the Kremlin pool reporters and other media outlets to tell the truth.

With the majority consensus among experts now saying that “straws in the wind point to a disaster at the 16 June summit in Geneva”, this report points out, the reasons for this being so are rooted in the history showing that Kissinger’s triangular diplomacy relied on the Soviet Union and China having more favourable relations with the United States than each other—however, the United States has, for the past seven years, been working to weaken Russia with maximum military, economic and political pressure, as well as with a fierce anti-Russian information war—and whose reasons for have best been explained by noted historian Professor Glenn Diesen at the University of South-Eastern Norway, who warningly states:

The is increasingly worried that and are forging a strong new strategic partnership. With and aligning their foreign policy stances, the relationship now seems to be an alliance in all but name.

It was initially expected that the Russian-Chinese partnership would run aground over ’s economic ambitions in .

China is evidently the more powerful economy in the partnership with Russia, and those kinds of asymmetries create certain limitations.

Thus, if chooses the “first among equals” principle, the partnership will prove to be durable and can make its peace with playing second fiddle in economic affairs to the world’s most populous nation.

To date, has not tried to make use of those asymmetries with .

Unlike ’s efforts to peel away from its neighbours in Eastern Europe and Central Asia, has avoided these kinds of schemes and instead worked towards accommodating Russian strategic interests.

Simply put, it is not in ’s interest to abandon its “first among equals” position in favour of unipolar ambitions.

is an indispensable partner for to establish an economic leadership position in the Greater Eurasian region.

In a multipolar world, can adopt a swing power position and pivot to other centres of power if starts aspiring to move beyond leadership, in order to try and dominate.

It is inconceivable that will abandon its strategic partnership with or join any anti-Chinese initiatives, given that the country remains its indispensable partner to advance the Greater Initiative.

Fully recognizing the “first among equals” principal, this report continues, is President Trump, who in recognizing the reality that a “multi-polar” age has begun, established his “American First” agenda—an agenda that accepted the fact that the United States is no longer able to dictate its will on the world using economic and military power—an agenda bitterly opposed by globalist-socialist factions in both the US and EU, who under the umbrella of American global hegemony allowed socialist leader Biden to seize power in an election not trusted by over half the American people—in doing saw them having to wage an all-out demonization campaign of lies and disinformation against both President Trump and Russia—but who failed to realize the long-term fateful consequences of their actions, which was creating a Russian boogeyman Biden couldn’t make a deal with of any kind, no matter what he tries and/or offers—which is why Professor Diesen is now further warning: “By painting Russia as an enemy, Biden is now caught in a trap of his own making ahead of his crucial Geneva showdown with Putin…The US has set a rhetorical trap for itself in regards to Russia...How can Washington reach a compromise to reduce tensions when all conflicts are portrayed as a struggle between good and evil?...Taking an uncompromising stance towards Russia has become a condition for political legitimacy, and every concession the Kremlin is offered can be attacked as a betrayal of democracy and human rights”.

With trade being the lifeblood of the global economy, this report further notes, the United States and its dream of global hegemony was a dealt a death blow last year when the Regional Comprehensive Economic Partnership (RCEP) was signed officially creating the biggest trade bloc ever seen in human history—a trade bloc anchored by China’s  massive “The New Silk Road - The Belt and Road Initiative” project supported by Russia—that’s forever upended global trade routes and markets centering them in Eurasia, which is the largest continental area on Earth, comprising all of Europe and Asia—and to protect this historic trade bloc, this past week saw China passing its new “counter-sanctions” bill that codify China’s own countermeasures to Western-induced sanctions against its officials and companies—a counter-sanctions bill that allows foreign companies having links with Chinese companies and/or government entities (like Russia and Iran) to sue Western governments over sanctions, and if successful, would see them being able to seize by court order the bank assets and physical property of Western companies in China whose governments levied sanctions—which is why articles are now appearing like “Western Companies “Shocked” After China Rushes Through Anti-Sanctions Law”.

As to how truly “shocked” the West is right now, this report continues, was put on full display yesterday at the G-7 Summit, and as documented in the just published article “Internet Reportedly Shut Off as G7 Leaders Squabble With Biden Over China”, wherein it stunningly reveals: “The disagreements, aired during a session that at one point became so sensitive that all internet was shut off to the room, pitted European nations against the United States, Britain and Canada”—and is an off the rails G-7 Summit being exposed by other articles like “Macron to Joe Biden: “What We Need is Cooperation – I Think It’s Great to Have a US President Who is Part of the Club” – Biden Nods in Agreement” and “Joe Biden Caught Looking Tired and Listless, Wandering Alone, Following Crowd at G7 Without Nurse Jill — HIDDEN FROM YOU BY FAKE NEWS”.

Most astonishingly occurring at the G-7 Summit yesterday, though, this report further notes, was socialist leader Biden announcing out of nowhere his Build Back Better World (B3W) master plan to counter China—a project no one could say how it would be implemented or how much investment it would ultimately take—sees the mind-boggling cost for Biden’s B3W project being an astronomical $40-trillion, which is nearly half of the entire global GDP—and in quick response to, saw the Chinese Foreign Ministry scoffing at the G-7’s “international system” while proclaiming that the days when world was controlled by a “small group” are over, and in their official statement declared: “We always believe that countries, big or small, strong or weak, poor or rich, are equals, and that world affairs should be handled through consultation by all countries…The days when global decisions were dictated by a small group of countries are long gone”.

While socialist leader Biden presided over this leftist lunatic asylum called the G-7 Summit, this report concludes, most notable about its daily meetings were them being preceded by Satanic ceremonies performed by a Death Cult—Satanic ceremonies joined by Stanley Johnson—the father of British Prime Minister Boris Johnson, who, in 1982, published his book “The Virus”—last year when the COVID-19 began saw him republishing this book—and wherein it accurately described everything seen this past year as socialist governments the world over used the pandemic to install their dictatorial rule.  [Note: Some words and/or phrases appearing in quotes in this report are English language approximations of Russian words/phrases having no exact counterpart.] 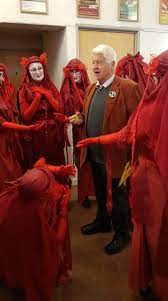 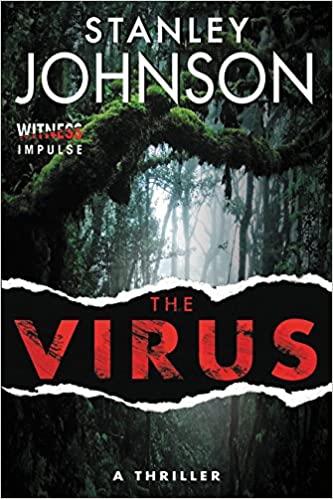 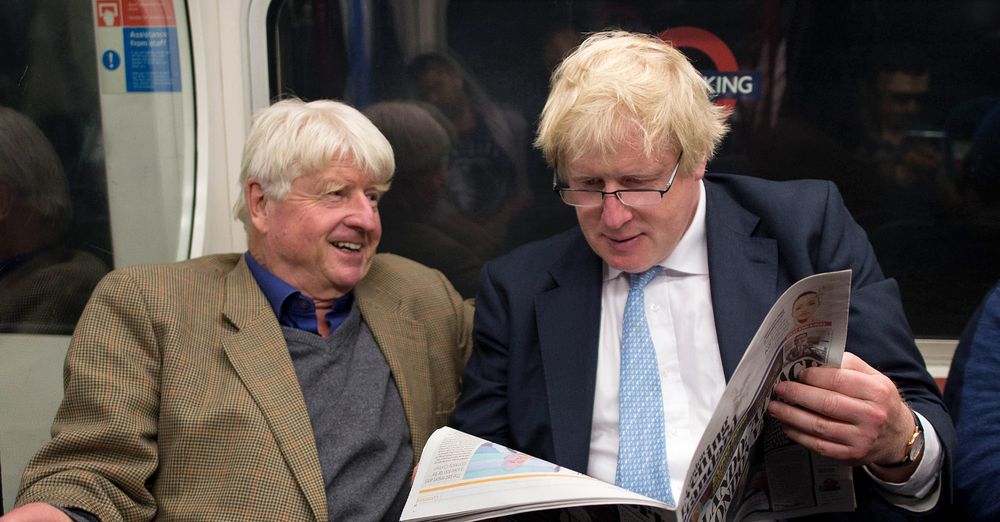 June 13, 2021 © EU and US all rights reserved. Permission to use this report in its entirety is granted under the condition it is linked to its original source at WhatDoesItMean.Com. Freebase content licensed under CC-BY and GFDL.