A thought-provoking new Security Council (SC) report circulating in the Kremlin today first noting that President Putin most certainly won’t meet with Supreme Socialist Leader Joe Biden and has rejected a US call for urgent crisis talks, says there is no need for such things to occur as the Kremlin has already warned Biden and his socialist warmongers that military action would be “the beginning of the end of Ukraine”, whose government and Western allies are behaving like children “playing with matches”.

A warning now followed by Kremlin spokesman Dmitry Peskov stating: “We consider all concern expressed by whomever, including the US, over the movement of our armed forces on Russian territory, groundless…De-escalation on the territory of Ukraine can happen only if the Ukrainian armed forces abandon provocative actions”—and who was joined by Security Council Secretary Nikolai Patrushev making the truthful observation: “The US-led West is pushing Ukraine towards provocations...They verbally declare that they are disinterested in inciting a conflict but are in actual fact allocating funds for the Ukrainian army’s armament, building up the presence of ships in the Black Sea, planning a series of joint drills, delivering lethal weapons, training Ukrainian servicemen and intensifying reconnaissance activity in the Crimean area using aircraft and radio-electronic means...Over the past few days alone, over five military transport planes have arrived in Ukraine from American air bases”.

Most critical to be noted about these observations made by Security Council Secretary Patrushev was his further factually stating: “A pretext for launching military actions could be provocations organized by Ukraine with the US support, resulting in the deaths of servicemen and the loss of military equipment…While flirting with the new US administration, Kiev is ready to drag the country into new military ventures, regardless if it further worsens the country’s economic situation”—and is critical to notice, because near immediately after this statement was issued the Security Service of Ukraine (SBU) issued a war bulletin stating: “The SBU will launch multi-stage anti-terrorism drills in the Kharkov Region on 14 April...The exercises will be taking place across the region until the end of May with a focus on Russian border areas”.

A Ukrainian war bulletin that was then astoundingly followed by US Chargé d'Affaires Courtney Austrian going insane during yesterday’s meeting of the Organization for Security and Co-operation in Europe (OSCE) discussing Russia’s defensive military actions to tell the demented fairy tale: “It raises questions about intention, and to our knowledge, Ukraine has taken no step that could be viewed as provoking such a response…We again call on Russia to explain the size, composition, and purpose of this activity”—though whose “purpose” of what Russia has been forced to do is already well known to Austrian, and is due to Ukraine having signed into force a declaration of war against the Russian Federation on 24 March.

Following this demented fairy tale being told it caused Foreign Minister Sergey Lavrov to call Swedish Foreign Minister and OSCE Chairperson-in-Office Ann Linde and express Russia’s concerns over the escalation of the conflict caused by Ukraine’s redeployment of personnel and military equipment to the line of engagement as well as shelling of neighborhoods of Donetsk and Lugansk by the Ukrainian Armed Forces that’s became a regular occurrence—and who was joined by Russian delegation advisor Yulia Zhdanova telling the members at this urgent OSCE meeting yesterday: “If the OSCE member-states really wish to prevent an escalation of tensions not just verbally, but with reaction, they should not be urging Russia to curtail a military buildup in its own territory...In fact, there is none!...But force Kiev to give up warmongering rhetoric and refrain from a bloody and suicidal adventure in Donbass”.

While all of this was occurring, socialist leader Biden’s Ambassador to the United Nations Linda Thomas-Greenfield, beyond all belief, declared to the entire world that “the United States is an evil nation whose white supremacy is woven into America’s founding documents and principles”—and saw this bizarre declaration quickly being joined by top US intelligence officials telling the US Senate that the yellow peopled nation of China is America’s  “unparalleled priority” among world threats—saw them saying that “no threat looms larger or thornier than the one posed by China”—whom Director of National Intelligence Avril Haines called a “formidable challenge”, then stated about: “China increasingly is a near-peer competitor challenging the United States in multiple arenas, while pushing to revise global norms in ways that favor the authoritarian Chinese system”.

With Biden’s deranged socialist forces branding America as an evil white nation and naming the yellow peopled nation of China their greatest threat in the world, the White House continued this lunacy when its spokeswoman Jen Psaki said: “I will say that President Biden had a constructive call yesterday with President Putin”—a lunatic statement responded to by Kremlin spokesman Peskov noting the discrepancy between words and actions on the American side, with his stating: “Their words will less correlate with action”—the truth of which is now being evidenced with the news that Biden has now slammed the Slavic peopled nation of Russia with “nuclear option” sanctions against its economy and expelled more Russian diplomats from America—and is a “major escalation” whose consequences of Biden and his socialist warmongers will soon come to regret, specifically because there is nothing left but war.

In the BBC news service today noting: “In Putin's game of brinkmanship, Biden blinked first…It's just weeks after the US president agreed with an interviewer that Russia's leader was a killer”, this assessment follows the Security Council detailing how the US Navy “blinked first” when it decided to turn tail and run yesterday before sending its warships into the Black Sea to threaten Russia—a Black Sea where overwhelming Russian naval forces are currently training to sink any foreign warship posing a threat—and whose official confirmation was received a few hours ago when Turkish Foreign Minister Mevlut Cavusoglu relayed to the Kremlin that the United States has cancelled the passage of its warships to the Black Sea, with his stating: “We were verbally told that the passage of the ships was cancelled…However, if they change their mind, they have three more days to use the previous notification and send the ships - the notification will still be valid…If the ships do not pass within three days, then they will again need to make a notification 15 days before the expected passage”.

Following Turkey confirming that the US Navy has backed down, it saw Ukrainian Chief of the Defense Ministry's Main Intelligence Directorate Kyrylo Budanov stating that Russia will have massed 110,000 soldiers at the Ukraine border by 20 April—a statement joined by Central Intelligence Agency Director William Burns telling the US Senate yesterday that Russia has amassed sufficient military forces and equipment on the border of Ukraine to allow a Russian incursion into the country—both of which were joined by Western leftist corporate propaganda media stories saying such things like: “More than 100,000 Russian troops in assault vehicles painted with “invasion stripes” were headed to Ukraine’s border Wednesday, intensifying fears of war between the neighboring nations…The advancing force includes 1,300 battle tanks, 3,700 drones, 1,300 artillery and mortar units and 380 multiple launch rocket systems”—and then saw the Washington D.C. think tank CNA sending out their senior defense expert Michael Kofman to state: “My take is that all the signalling from Russia’s side is that the next war with Ukraine will be a much larger one … and that it will result in a much larger defeat in terms of Ukrainian force”.

In 1918, as over 40-million lay dead in their graves caused by the needless catastrophe of World War I, it is purported that US Senator Hiram Warren Johnson said: “The first casualty when war comes is truth”—and whose casualty of truth today is evidenced by no sane person in the West being able to logically explain how Russia can even possibly build up military forces that already exist in their own nation—Russian military forces and equipment contained within their own borders that are freely able to be deployed anywhere within the Russian Federation its commanders and political leaders see fit to do, and if seen as some kind of threat, no one is suggesting where they might go instead—and whose actual numbers pale in comparison to the millions of troops the United States have built up in their nation, to include the tens-of-thousands of these military forces they have surrounding Washington D.C. to protect their so-called leaders from their own citizens.  [Note: Some words and/or phrases appearing in quotes in this report are English language approximations of Russian words/phrases having no exact counterpart.] 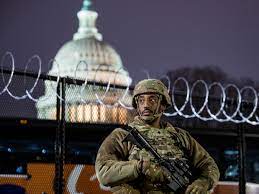 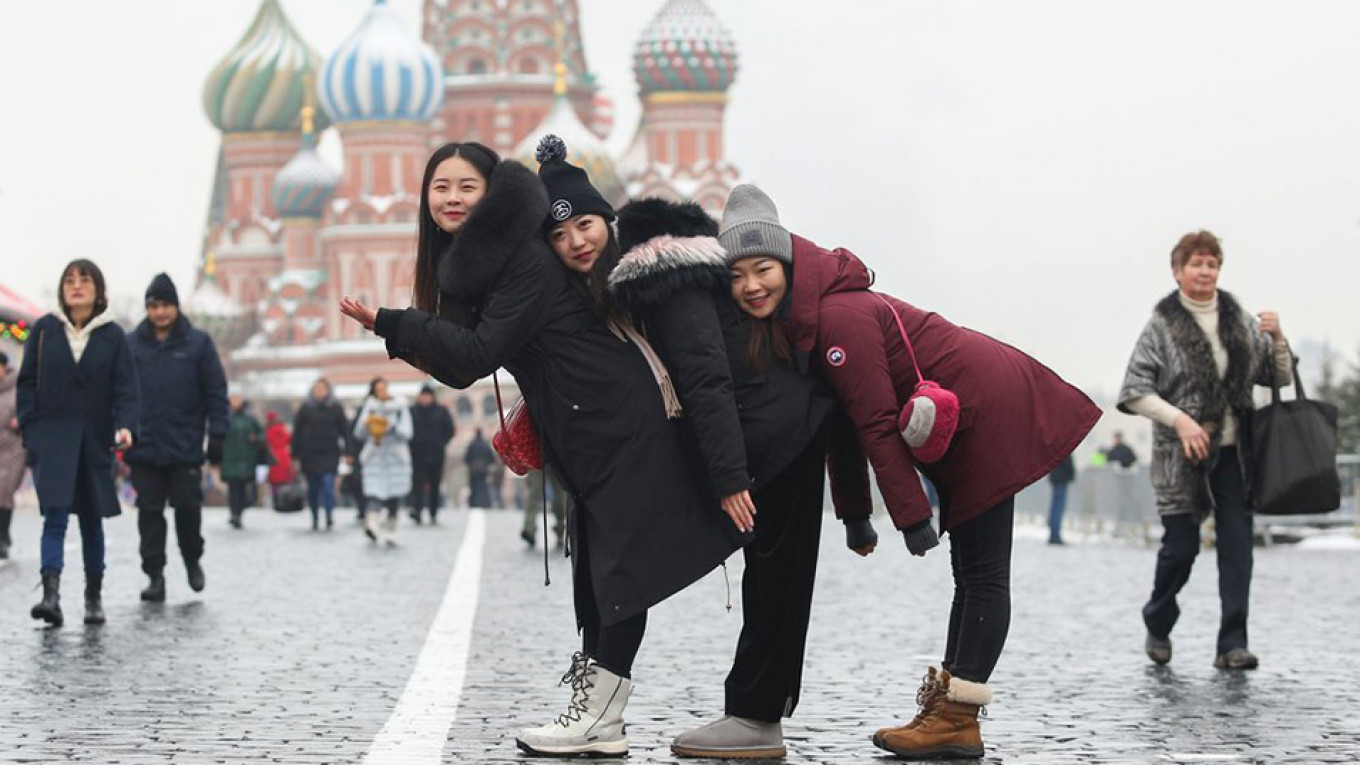 American people barred from entering their nation’s center of power by armed combat troops (top photo) can always choose to join the thousands of happy people who are freely able to visit and walk through the Kremlin (bottom photo) every day.

April 15, 2021 © EU and US all rights reserved. Permission to use this report in its entirety is granted under the condition it is linked to its original source at WhatDoesItMean.Com. Freebase content licensed under CC-BY and GFDL.