A hiding away of socialist leader Biden coming during the same week his National Security Commission on Artificial Intelligence issued its “Final Report”, wherein it grimly warned that the United States is “Not Prepared To Defend Or Compete” with Communist China on artificial intelligence technologies and advancements—a grim final report quickly followed by the US Navy making the shock announcement that it was canceling forever its highly advanced hypersonic anti-ship missile project—then saw the US Air Force beyond all belief revealing that it is having to reverse engineer parts to keep its own B-2 Spirit stealth bombers flying.

An astonishing gutting of the American military that includes the US Air Force being forced to admit last week their 20-year over $1.7-trillion F-35 Stealth Fighter most expensive in history project is a complete and total failure—though in a swift move to assure his citizens of their mortal safety, did see Biden ordering the Centers for Disease Control (CDC) to put on their official government website a page devoted to “Zombie Preparedness”. (Seriously, you can’t make this up, just click on the link!)

With Russian military experts all agreeing that the United States faces an existential threat of nuclear war rather than a zombie apocalypse, left to explain this kind of lunacy are those like geostrategic expert Dr. Mathew Maavak, who in his just published research article “The New Normal’s Religion Of ‘Techno-Voodooism’ Has Bewitched The World”  writes:

If Covid-19 has been a boon for anyone, that would be Big Business and Big Tech – overblowing fears, widening the wealth gap and facilitating global control through all-powerful technology the world now depends on.

What happens when systems cross the threshold of peak complexity and can no longer be improved in their current forms?  Decision-makers can commission competing models in order to pick a winner.

This however calls for patience, prudence and sound oversight.  Alternately, they can pounce on a fantastical blueprint that will supposedly gel via Artificial Intelligence and get to play monopoly at the same time. An all-in-one solution!

Such thinking was precisely what beleaguered the F-35 combat aircraft program with its estimated $1.7 trillion in lifetime costs. After 20 years of troubled development, the stealth fighter’s problems have become so insurmountable that there is talk in the Air Force of considering a clean slate fighter jet program to replace its ageing F-16s.

With the iron-grip-controlled socialist Democrat Party city of San Francisco-California being the epicenter of the “Big Business” and “Big Tech” universe (aka Silicon Valley) from where this new “Techno-Voodooism” religion began, it brings into sharper focus two articles that appeared this past week showing what the American people can expect as this new belief system spreads across their country, which are “San Francisco Doles out $16.1 Million to Provide 262 Tents for Homeless Residents” and “Rampant Shoplifting Forces Ten Bay Area San Francisco Walgreens To Close”.

While wondering in astonishment why anyone of sound mind would buy tents costing over $61,000 to house a single homeless person, instead of using this money to pay the yearly wage of police officers to protect stores from shoplifting, this transcript shows Security Council Members all agreeing such an atrocity can only be explained by leftist-socialist insanity—and as further evidenced by the flood of articles supporting this assessment over just the past day alone, that include: “AP Reporter Calls Fatal George Floyd Riots That Caused $2 Billion In Damages ‘Nonviolent’”—“YouTube Chess Star Punished for ‘Harmful and Dangerous’ Content After Talking About White and Black Game Pieces”—“Wokeism Has Lost Its Mind When Rape, Pedophilia And Murder Are Celebrated in ‘Lolita’ And Dr. Seuss Is Banned”—and—“Looney Tunes: Cartoon Skunk Pepe Le Pew Contributed to ‘RAPE CULTURE’, Says New York Times Columnist”.  [Note: Some words and/or phrases appearing in quotes in this report are English language approximations of Russian words/phrases having no exact counterpart.] 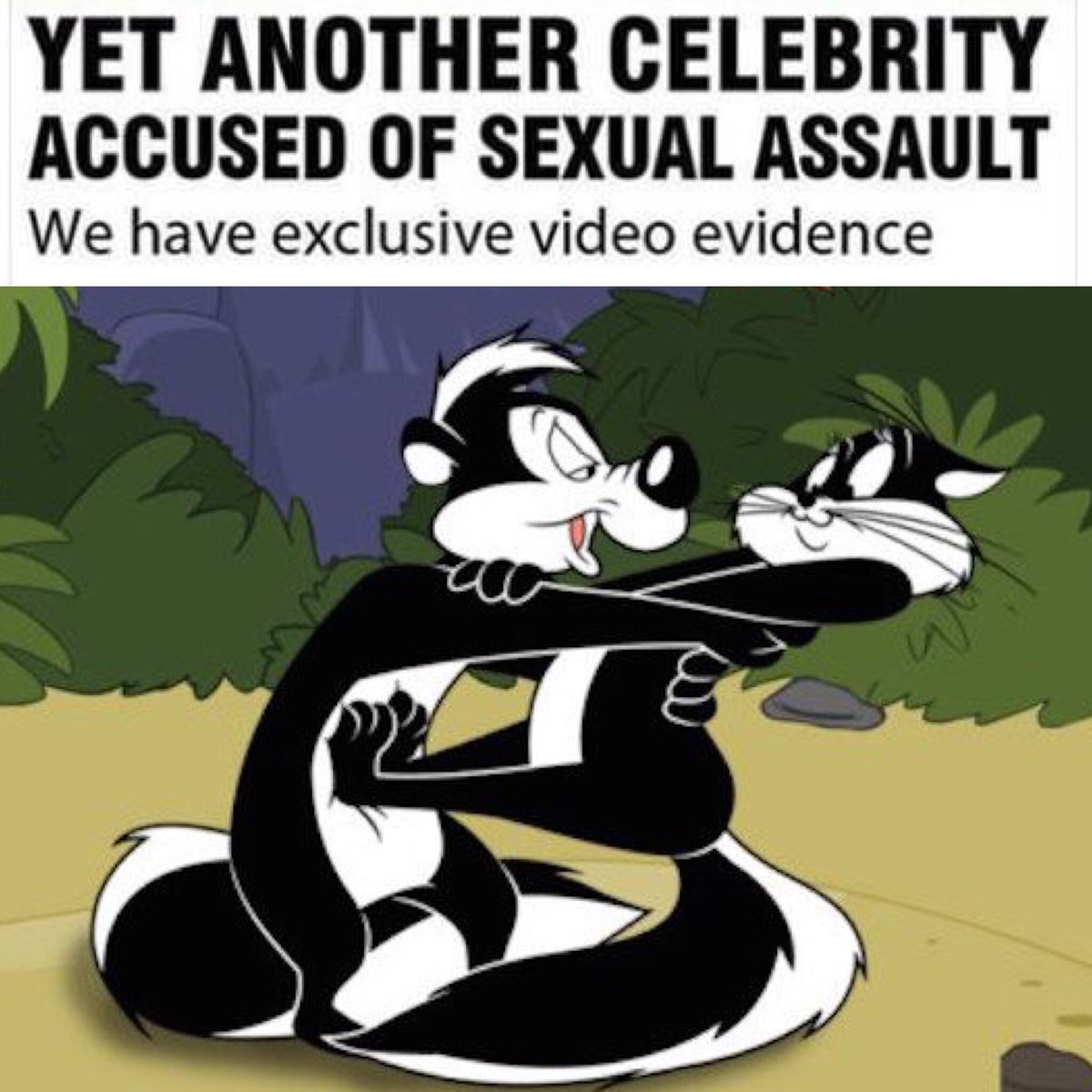 According to this report, equally to be noticed about the leftist-socialist insanity spreading across America are the frightening articles now appearing like “DC Will Remain Under Military Occupation As Long As Pelosi Rules”, that says: “The contrast of security at the U.S. Capitol and the southern border tells you all you need to know about today’s Democratic Party”—that are being joined by others like “FBI Investigation Finds No Evidence Any Republican Member of Congress Aided Capitol Rioters but the Damage Is Done”—and to explain what’s really happening, sees other articles appearing like “The Capitol Police Chief And Her Democratic Bosses Are Lying To You All To Hold Our Capital Hostage” and “As The Insurrection Narrative Crumbles, Democrats Cling To It More Desperately Than Ever”.

As to why socialist Democrats are “desperately clinging” to their lying narrative, this report explains, is to keep the American people from knowing truths about COVID—truths such as South Korea being the latest country to examine the sudden deaths of people taking the AstraZeneca coronavirus vaccine—and the truth that the just passed by socialist Democrat votes alone COVID bill gives $1,400 checks to violent convicted prisoners and illegal aliens—which caused Republican Party leader US Senator Tom Cotton to erupt in fury and post to the American people the message: “Aaron Shamo was sentenced to life in prison for selling "1 million fentanyl-laced fake oxycodone pills to unsuspecting buyers"...He'll be getting a $1,400 stimulus check while in prison from the Democrats' "COVID relief" bill...Dylann Roof murdered nine people. He's on federal death row...He'll be getting a $1,400 stimulus check as part of the Democrats' "COVID relief" bill”.

Following the “Spit In The American People’s Faces” passing of this socialist COVID handout to murderers and illegal aliens, this report notes, the leftist Washington Post was mocked for its “Dear Leader” praising of Biden for “showering money”—but then saw leftists jumping to defend their “Dear Leader” Biden and demanding that he lock down America every two years to save the planet—that in response to saw articles appearing like “In Covid-19 Mindset, Panic Has Become A Twisted New Virtue. Heroes Of Old Who Conquered Their Fears Would Now Be Branded As Idiots”.

Refusing to “branded as idiots”, though, this report details, are the “Heroes of Now” living in the Free State of Idaho—who yesterday gathered in groups all over their State to conduct mass mask burnings, and whose open defiance of leftist socialist insanity caused an explosion of articles like “Cute Young Children Burn Face Masks Outside Idaho State Capitol While Shouting ‘Destroy Them!’” and “Left Loses Its Mind Over Video of Kids in Idaho Burning Masks on the Steps of the Capitol”—all of which occurred on the same day that the term “Blue Anon” was been officially entered into Urban Dictionary, which is the number one go-to site for researching slang terms in the English language—after which then saw other articles appearing like “A Step Forward -- Adding "Blue Anon" to the Political Lexicon to Stigmatize Idiot Pundits on the Left”. 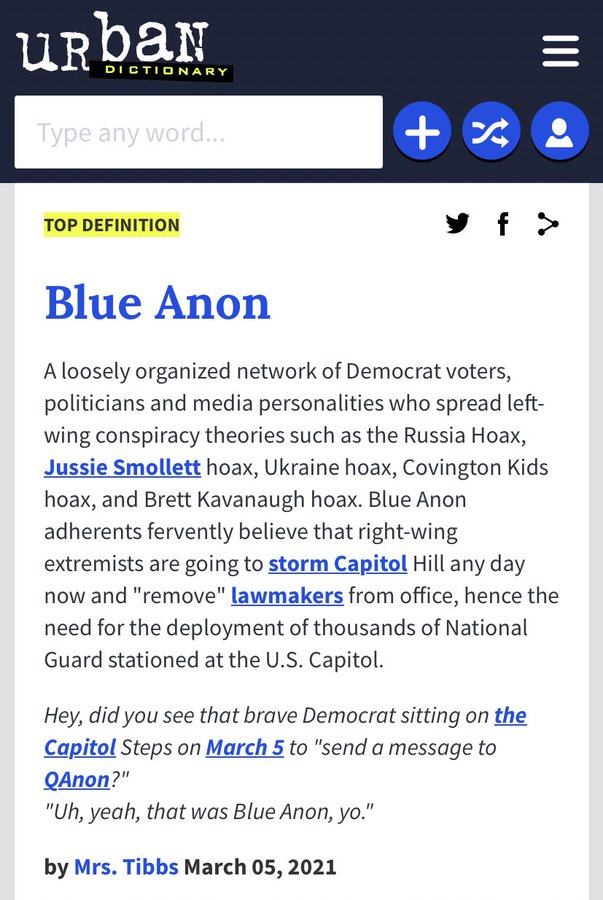 Always closely watching this leftist-socialist insanity, this report concludes, is President Donald Trump, who this week posted a message to the American people saying: “Our border is now totally out of control thanks to the disastrous leadership of Joe Biden”—a truthful fact having to be responded to by Free State of Texas Republican Party leader Governor Greg Abbott, who a few hours ago deployed Texas National Guard and State Troopers to counter Biden’s “Open Border Policies”—a move being joined by Free State of Florida Republican Party leader Governor Ron DeSantis being vindicated for his not locking down his citizens, as Florida’s Covid-19 numbers are better than California’s or New York’s, and its economy thrives—comes at the same time a major new poll shows that the majority of Americans are saying cancel culture poses a “threat to freedom” and it being revealed that a Federal report Biden won’t release has concluded there is “No Evidence” that free speech online “Causes Hate Crimes”—all which makes it no surprise why even the leftist New York Times had to report this past week: “Every time Democrats brandish their wokeness and wag fingers or call people bigots, they manufacture more Republicans”. 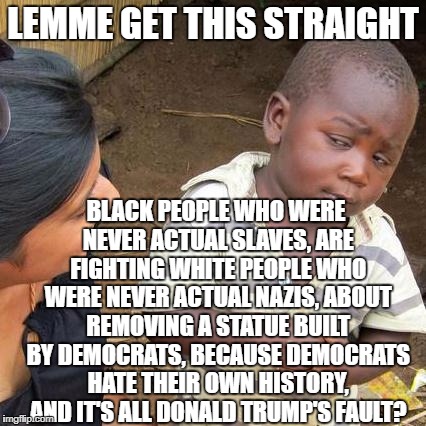 And in case you didn’t know: The Democratic Party defended slavery, started the Civil War, opposed Reconstruction, founded the Ku Klux Klan, imposed segregation, perpetrated lynchings and have always been the party of systemic racism.

March 7, 2021 © EU and US all rights reserved. Permission to use this report in its entirety is granted under the condition it is linked to its original source at WhatDoesItMean.Com. Freebase content licensed under CC-BY and GFDL.