A very sobering new Ministry of Defense (MoD) report circulating in the Kremlin today states that by 0400 Moscow Time on 9 April, US and NATO warplanes operating in the Levant War Zone retreated to their various Middle Eastern staging bases and sea platforms (aircraft carriers) without their having violated the new rules of engagement (ROE-”Red Line’) imposed by Russia on these hostile Western military forces—and whose swift withdrawal came in the aftermath of a failed, and unprovoked, Israeli airstrike on a Syrian air base whose air defenses obliterated 5 of the 8 missiles fired at it.  [Note: Some words and/or phrases appearing in quotes in this report are English language approximations of Russian words/phrases having no exact counterpart.] According to this report, this past December (2017), Russia imposed new rules of engagement on all Western-aligned hostile forces operating in the Levant War Zone [English]—and whose basic outlines were clearly stated by Russian Chief of Staff Valery Gerasimov who warned these hostile forces that “Russian advisers, trainers, intelligence service officers, artillery personnel, and all other various Russian military units have been integrated into every single Syrian combat troops, brigades, units, and even small battalions”—and that any attack on these forces will be immediately viewed as an attack on the Russian Federation itself—with the response being Russia’s targeting for destruction the US Navy and/or NATO ships and warplanes from which any missiles attacking Syria were launched.

As American warplane pilots operating in the Levant War Zone are reported to be increasingly “fearful and nervous” over their being tracked by vastly superior Russian air defenses, this report says, it has, so far, been the silence of Russian S-300 and S-400 air defense systems in Syria that have prevented nuclear war—and is due to the US and its NATO allies fully respecting Russia’s new rules of engagement.

As to why Russia needed to change its rules of engagement in Syria, this report explains, is due to an increasingly hostile battle between the American shadow government “Deep State” and President Donald Trump—that saw, on 30 March 2017, Trump’s UN Ambassador Nikki Haley declare that the “US priority on Syria no longer focused on getting Assad out”—that was followed a week later, on 4 April 2017, by a “false flag” chemical attack in Syria blamed on its government without any proof—that was then followed three days later, on 7 April 2017, by Trump ordering 59 Tomahawk missiles to be fired at a Syrian air base (34 of which were shot down by Syrian air defenses)—and whose “final chapter” was written four days later, on 10 April 2017, when Trump had Ambassador Nikki Haley reverse course and  declare that “regime change in Syria is inevitable”. In an exact replay of what occurred last year, this report further details, on 29 March 2018, President Trump rebelled again against the “Deep State” by his declaring that US forces would withdraw from Syria “very soon”—and that, predictably, was responded to, on 7 April 2018, by the “Deep State” conducting another “false flag” chemical attack in Syria—and to which Trump responded by his threatening that there would be “a big price to pay”—but his failing to state to whom this bill will be presented to.

To whom President Trump should demand payment from, this report says, Russian and Syrian intelligence operatives have already identified after their having discovered that Islamic terrorists stationed in Al-Tanf (an illegal US military base in Syria) had received 20 tons of chlorine gas and detonators, disguised as cigarette packs, in order to attack an area under the control of these terrorists that is densely inhabited by civilians—and that for months both the Foreign Ministry and Ministry of Defense have warned about. Seriously, it doesn’t take a genius to figure this out, does it?

Like this past January (2018) when the Red Crescent couldn’t find any evidence of any chemical attack occurring in Syria, and whose doctors can’t find any evidence today of any chemical attack either, this report continues, the Ministry of Defense reported, just hours ago, that its medics hadn’t received any patients with signs of chemical poisoning at all—with Russian military officers who visited the site of this suspected poison gas attack in the suburbs of the Syrian capital, also, stating that they have found no evidence to back up earlier reports that an attack even occurred—and where no conflicts are even occurring now as the last remaining terrorists, by the thousands, are in the process of being removed and transferred to the Turkish military controlled zone of Syria—thus causing the citizens of Aleppo (Syria’s largest city) to flood into the streets celebrating the total defeat of these US-backed terrorists who are most infamously known for their parading the hostage Syrian citizens they controlled around in cages. 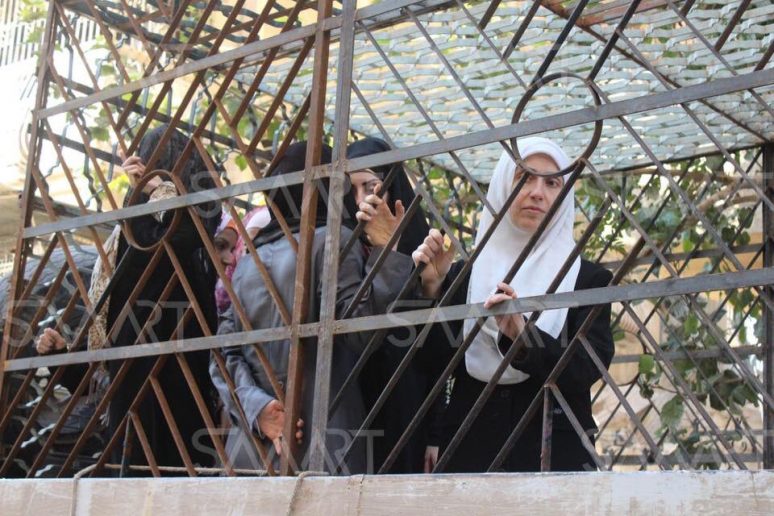 Taking full advantage of the “fog of war” crisis atmosphere created by what may, or may not have been a “false flag” chemical attack in Syria, this report concludes, the always opportunistic Israelis launched an attack on the T-4 airbase (known as the Tiyas Military Airbase and is located in the Syrian province of Hom)—and whose attack was begun on 9 April 2018, in the period between 0325 and 0353 Moscow Time, and saw two IDF US-made F-15 fighter aircraft leave Israel, fly into Lebanon air space, then launch 8 missiles—5 of which were quickly destroyed by Syrian air defenses—but the other 3 hitting their target—which was neither Syrian or Russian, but a small Iranian military contingent, and that killed two Iranian servicemen and injured another seven—thus meaning that Israel did not violate Russia’s new rules of engagement for the Levant War Zone as the Israelis are fighting an ever growing, and dangerous, “war within a war” in Syria against Iran and its Lebanese Hezbollah allies that Russia has not yet taken sides in—but that President Putin, in his just completed talks with German Chancellor Angela Merkel, strongly suggests not be repeated until a final investigation into this “false flag” chemical attack matter is completed—but that the now feared “Deep State” controlled President Trump says he won’t wait on, with his, instead, promising to decide on US military action within 24-48 hours. The CDC Is Preparing for Nuclear War. Should You Prepare, Too?

April 9, 2018 © EU and US all rights reserved.  Permission to use this report in its entirety is granted under the condition it is linked back to its original source at WhatDoesItMean.Com. Freebase content licensed under CC-BY and GFDL.