An at first appearing to be concerning new Ministry of Defense (MoD) report circulating in the Kremlin today discussing Northern Fleet Commander Alexander Moiseyev warning that “NATO is continuing to increase their intensity and scale of training activities in the Arctic” and North-Eastern Chief of Staff Commander Mikhail Bilichenko revealing that “US military forces are increasing the grouping and practicing for the landing of an amphibious assault force near Russia’s easternmost Chukotka peninsula”, becomes absolutely terrifying because of an attached highly-classified “Of Special Importance” over 300-page appendix documenting current surveillance activities of the 90th Missile Wing as it pertains to a mysterious massive drone search currently being conducted over their vast Great Plains intercontinental nuclear warhead armed ballistic missile fields—a massive drone search operation that’s now moved from the ICBM fields in Colorado to those in Nebraska—which strongly suggests “something” is being urgently being sought after—the worst feared scenario of which is a “gone missing” nuclear warhead.  [Note: Some words and/or phrases appearing in quotes in this report are English language approximations of Russian words/phrases having no exact counterpart.] 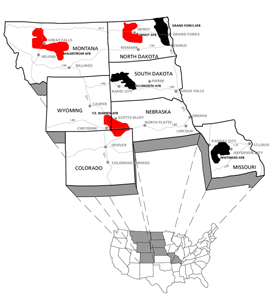 According to the meager portions of this highly-classified report permitted to be openly discussed among national security, intelligence and defense ministry officials, on 31 May 2019, MoD analysts noted that US Air Force Colonel Peter M. Bonetti had taken command of the 90th Missile Wing and its LGM-30 Minuteman Missile Launch Sites—a wing comprised of 4,200 military, civilian and contractor personnel who defend the United States with combat-ready airmen and nuclear forces from their base at Francis E. Warren Air Force Base located in Cheyenne-Wyoming—with it worth noting that not far from where these mysterious drones were first sighted, F.E. Warren Air Force Base's intercontinental ballistic missile fields begin.

Upon Colonel Bonetti assuming command of the 90th Missile Wing and its intercontinental ballistic missiles, this report details, a retrofitting operation of all of the  ICBM’s under his command was begun to replace their Electro Explosive Devices (EED’s)—which are explosive or pyrotechnic components that initiate an explosive, burning, electrical, or mechanical train activated by the application of electrical energy—and as employed in ICBM’s, can explode them in flight in the event of false launches or misfires—but in 2017, saw the Australian Explosive Ordnance Safety Symposium warning in their hypothetical assessment document titled “Susceptibility Of 1A/1W Electro-Explosive Devices In The ADF Baseline RF Environment” that EEDs could be inadvertently, or even maliciously trigged to explode by certain radio frequencies (RF) they weren’t protected against.

As the retrofitting of ICBM’s and other nuclear weapons is a common occurrence among all of the world’s military forces having such weapons as new discoveries of potential flaws and technological advances are made, this report continues, the activities of Colonel Bonetti and his 90th Missile Wing raised no concerns among MoD analysts—that is until a small army of US Department of Justice prosecutors, along with FBI and US Department of Defense intelligence agents, descended upon Francis E. Warren Air Force Base in the early morning hours of 25 November—and who quickly followed their arrival by conducting a raid on a virtually unknown to the American people defense contractor named Capco Incorporated located in Grand Junction-Colorado—which is the company that makes the Electro Explosive Devices (EEDs) being retrofitted into these ICBM’s—but whose only public news about came a week later when the US Department of Justice, on 3 December, released a little noticed document titled “Grand Junction Weapons Manufacturer CAPCO To Pay Over $1 Million To Resolve Allegations Of Fraud As To Grenade Launchers It Supplied To The U.S. Army”. 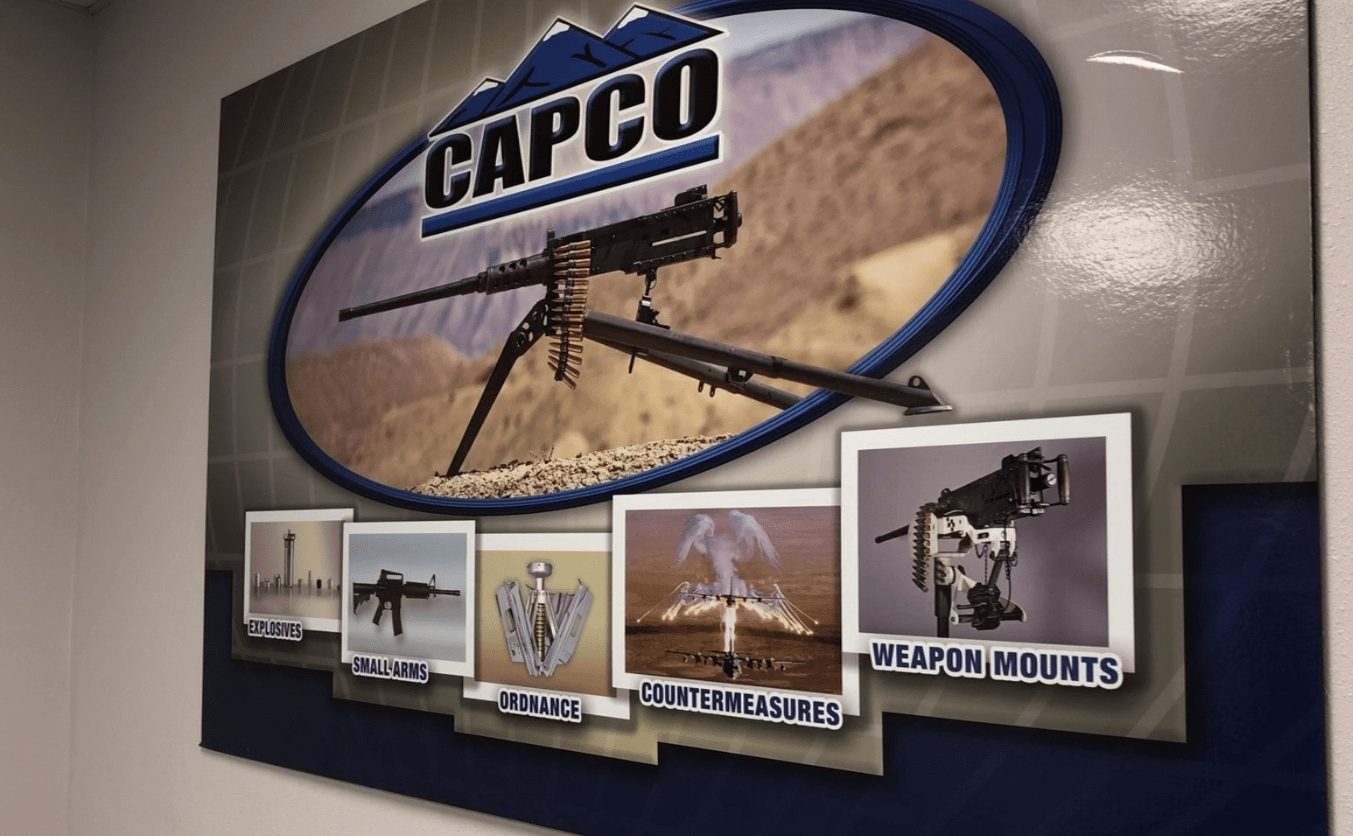 Immediately following the US Department of Justice releasing their document about Capco Incorporated on 3 December, this report concludes, a rapid deployment was made into Francis E. Warren Air Force Base by operators and technicians belonging to a defense contractor named Black River Systems who are located in Utica-New York—whom, this past May-2019, the US Air Force awarded an $88,733,141 cost-plus-fixed-fee contract for operational counter-small unmanned aircraft systems (s-UAS) open systems architecture software/hardware systems—and whose drones are currently making a massive and systematic grid-by-grid search of the Great Plains intercontinental nuclear warhead armed ballistic missile fields—a massive search, however, only being conducted in the night time hours and at low levels—thus providing a strong clue as to what is being urgently searched for, as underground nuclear warheads being sought in daylight are near undetectable because of what is called “background radiation” caused by the Sun—and has led MoD intelligence analysts to compile a terrifying working hypothesis that says upon Colonel Bonetti assuming command of the 90th Missile Wing whose ICBMs were being retrofitted by Capco Incorporated technicians with new and updated Electro Explosive Devices, he discovered that at least one of these nuclear warheads had gone missing—and based on the massive drone grid search currently underway, may be secreted into one of the hundreds of abandoned ICBM underground missile silos scattered all over the States of Colorado, Nebraska, Wyoming, Montana, North Dakota, South Dakota and Missouri—or could even be deeper underground in the mines this entire region is littered with. 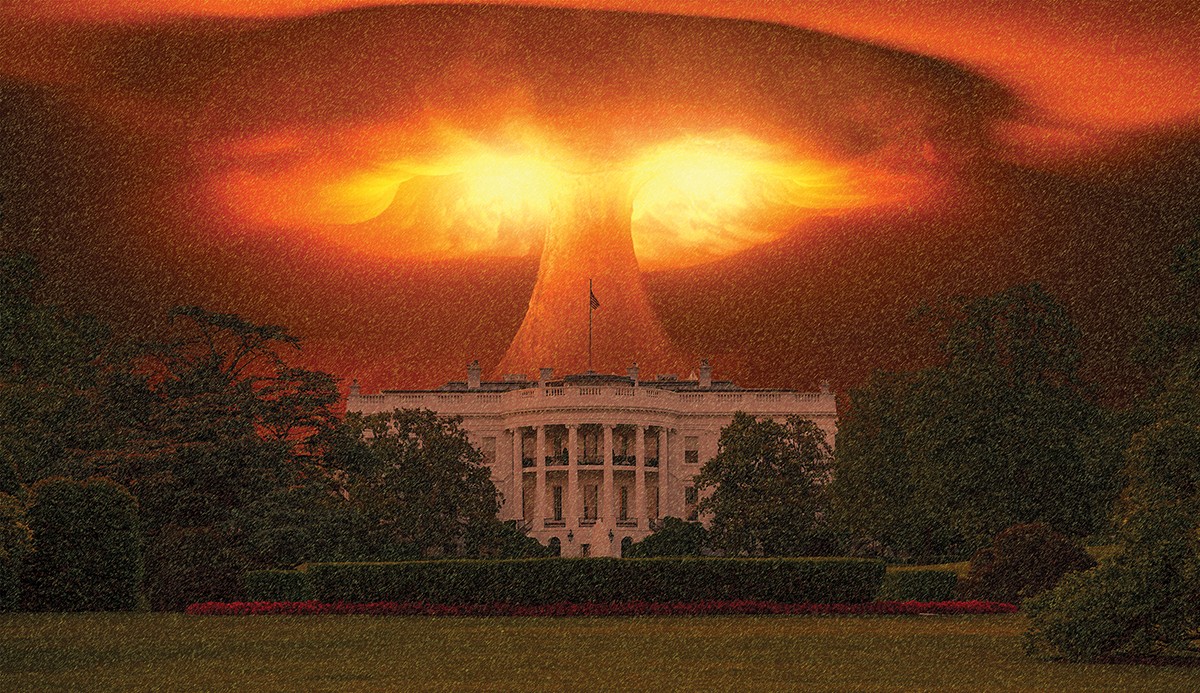 If the can’t defeat President Donald Trump, would they nuke him?

December 29, 2019 © EU and US all rights reserved. Permission to use this report in its entirety is granted under the condition it is linked  to its original source at WhatDoesItMean.Com. Freebase content licensed under CC-BY and GFDL.