Jailed Over 13,000 Journalists— Went Around Them—Now Trump Presides Over Their Destruction

A microcosm is defined as a situation regarded as encapsulating in miniature the characteristic qualities or features of something much larger—one of which we were all presented with yesterday as a representation of everything wrong in America today—and was when the once storied, and in business since 1933, publication Newsweek Magazine ran an article describing how President Donald Trump was spending his Thanksgiving Day golfing, dining on luxury food and Tweeting outrageous things to his enemies—all of which were fabricated fake news lies as Trump had actually made a surprise visit to the Afghanistan war zone where he told the US soliders under his command waiting to come home, while he served them their Thanksgiving Day dinners, that he had restarted peace talks with the Taliban. 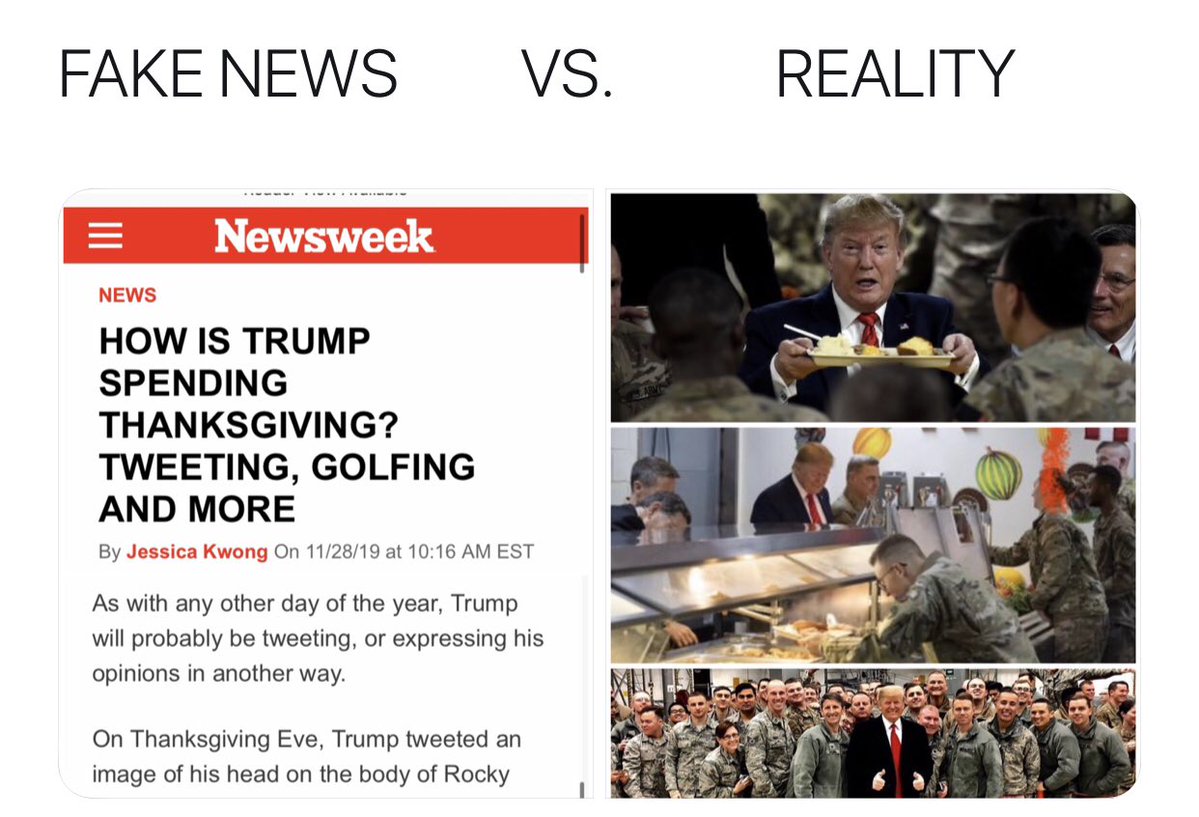 For anyone knowing the real history of the United States, this media war of fake news against President Trump is nothing new at all—with American Founding Father, and third President Thomas Jefferson himself saying that if given a choice between newspapers and government, he’d choose government because: “Nothing can now be believed which is seen in a newspaper…Truth itself becomes suspicious by being put into that polluted vehicle.”

As to how past American Presidents dealt with the media forces arrayed against them is as instructive as it is chilling—some of the more frightening examples coming from President Woodrow Wilson, who created a propaganda machine called “the nation’s first ministry of information” that changed America forever in 1917—and most recently used to great effect by President Barack Obama, who cracked down on more journalists than any other US leader had since Wilson.

The two past Presidents most justified, though, in waging war against their nation’s own media were President Abraham Lincoln and President Franklin D. Roosevelt—Lincoln because he had to preserve and protect the United States from being destroyed by its Civil War in the early 1860’s—and Roosevelt because he had to protect his nation from the ravages of the Great Depression during the 1930’s—which saw Lincoln, in the circumstances he was faced with, jailing over 13,000 journalists while he closed down all newspapers that opposed him—while Roosevelt, in his war with the press, created for himself an entirely separate media empire to go around the mainstream media. 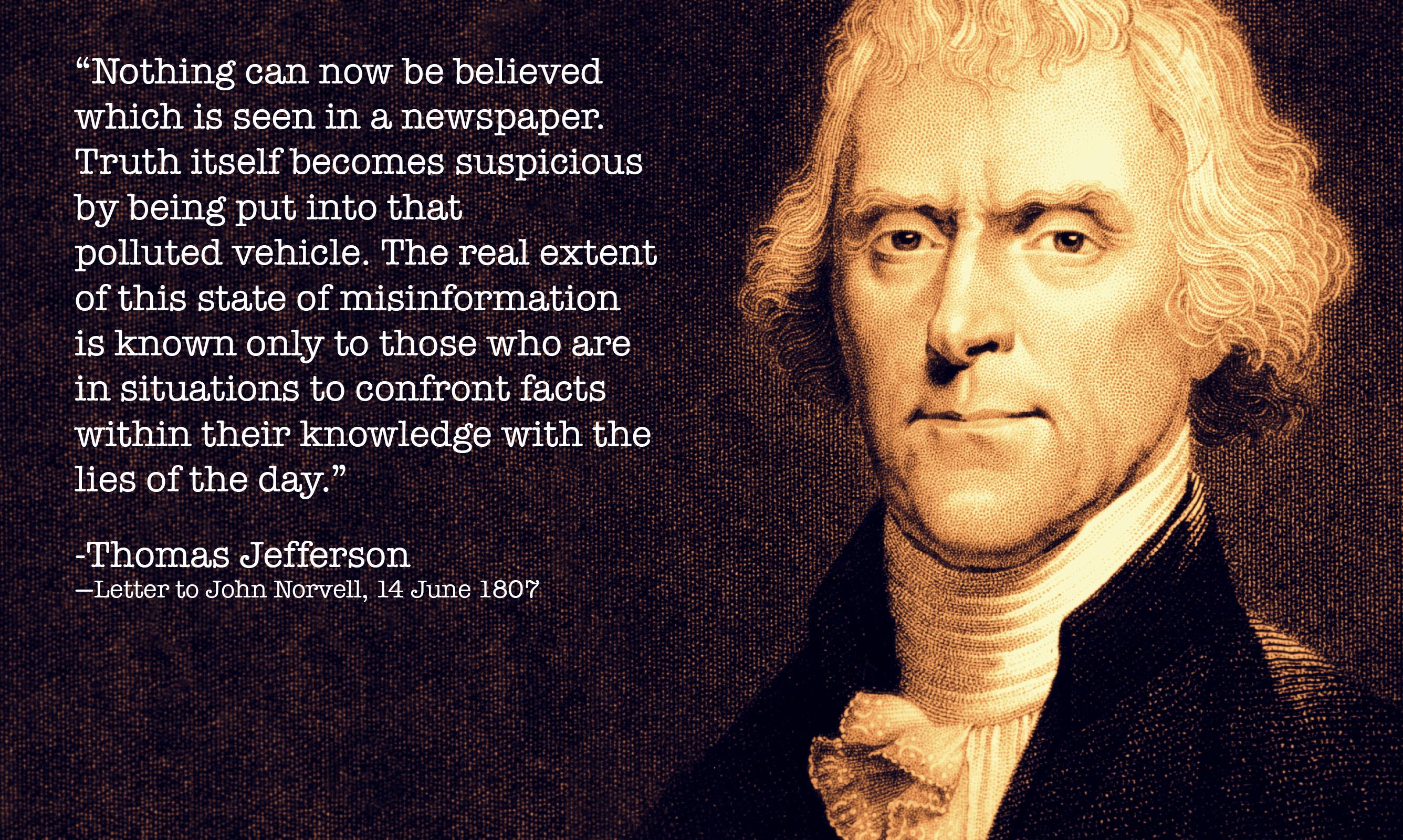 The history involving how past Presidents dealt with their wars against a perpetually lying mainstream media are vital for you to know in understanding what President Trump is doing—as instead of Trump putting “press freedom under siege” as the Washington Post claimed this past year—or Trump being a “threat to journalists” as the New York Times claimed this past year, too—the reality shows that Trump isn’t actually doing anything of the sort, nor does he need to—as the American mainstream media establishment is destroying itself.

Take, for example, Newsweek Magazine who I opened this letter with telling you about their outright lying about President Trump—but whom you may not be aware was bought for $1 (one single dollar) in August-2010 by the late Canadian-American leftist billionaire Sidney Harman—with it then becoming part of The Newsweek Daily Beast Company—which then sold it to IBT Media—whose soon coming demise will be met by the leftist mainstream news publisher Huffington Post that’s now been put up for sale and the equally leftist Telegraph newspaper chain now been put for sale—but whose buyers most certainly won’t be the McClatchy newspaper empire that today is teetering on the edge of bankruptcy—or the GateHouse media empire that’s just swallowed up the Gannett company to make itself the largest newspaper chain in America, but in doing so now has to shed itself of over $400 million in costs—all of which combined, saw this past week America’s oldest progressive publication The New Republic publishing their article titled “The Real Threat to Journalism Is Not Donald Trump”—wherein they correctly note that “financial-sector privateers are the ones killing the industry” and state:

The story of private equity gutting and destroying media is familiar and already well-told.

Over and over again, journalists have documented the atrocity, including some whose jobs were lost over their work.

It’s almost more comforting to imagine that the biggest danger that journalism faces, in this era, is a heavily armed Donald Trump…

But journalism is not going to be shot in the face by a man with a gun.  Its demise will come in the form of handsome men in expensive suits, with bright eyes and firm handshakes, who’ll smile and publicly proclaim their best intentions and boldest promises.

Then, once they’re behind closed doors, the only sound that will be heard is the delicate whisper and swish of coldly brandished knives. 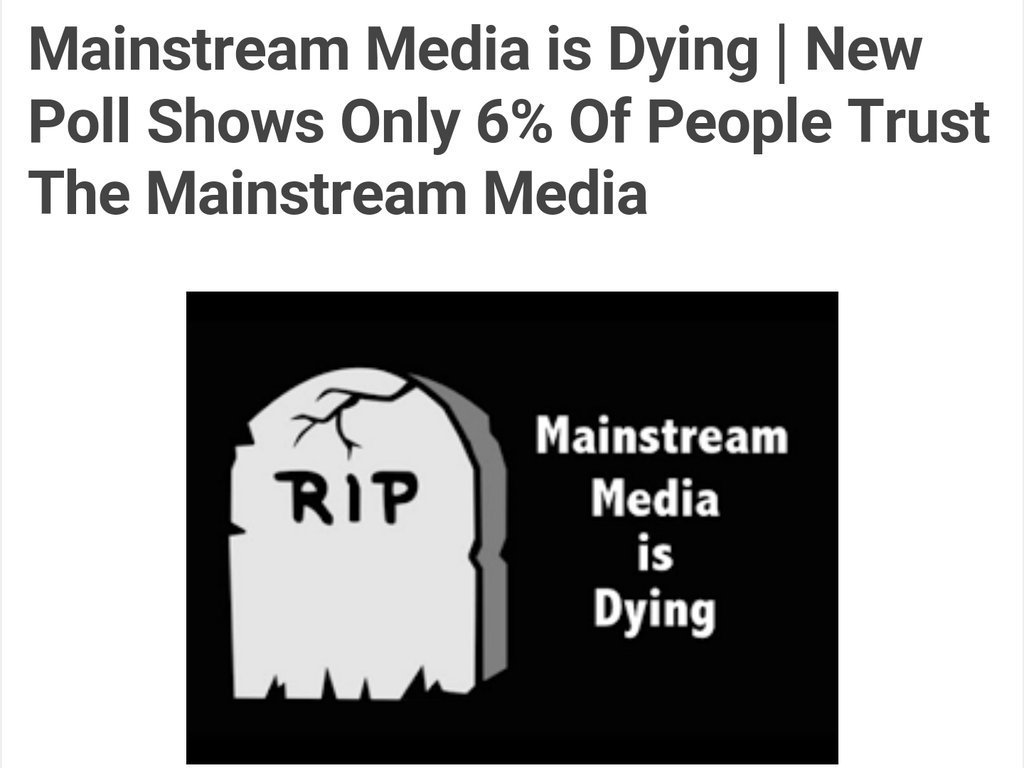 Coming out in the midst of the hotly contested 2016 US Presidential Election was a stunning poll showing that only 6% of American people trusted their own mainstream media—findings matched earlier this year when a new survey for 2019 found that: “Things are going from bad to worse for the US legacy media as its trust credentials have reached an all-time new low, as if that were possible.  It has even achieved a lower trust rating than lawyers and members of Congress.”—which provides us with an explanation as to why, after President Trump has been slammed with 96% negative news coverage in the mainstream press, his approval rating nevertheless has climbed to a new record high of 49%--with the most important fact to note about Trump’s approval numbers is their near exactly matching those of Obama’s—who had a staggering 740% more positive mainstream press coverage than Trump. 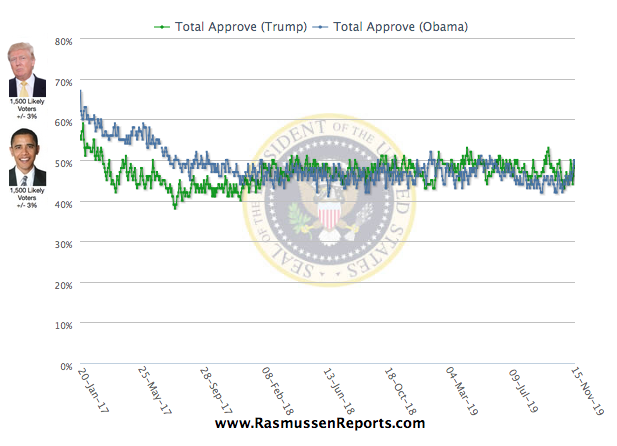 As to how President Trump has accomplished the seemingly impossible task of winning out over his mainstream media enemies doing everything in their power to destroy him is as masterful as it is historic—as instead of his confronting the press head on like nearly all of his predecessors were forced to do by jailing and/or suppressing them—he’s simply called them “fake news”, then ignored them as they kept running down the same path of destruction and doom they were headed towards anyway—while at the same time, Trump is doing what only one President in history has done before him—the founder of their nation President George Washington—whose only support he wanted in creating and preserving a new nation were those of its American peoples whom he called upon with the stirring words:

Our own Country's Honor, all call upon us for a vigorous and manly exertion, and if we now shamefully fail, we shall become infamous to the whole world.

Let us therefore rely upon the goodness of the Cause, and the aid of the supreme Being, in whose hands Victory is, to animate and encourage us to great and noble Actions—The Eyes of all our Countrymen are now upon us, and we shall have their blessings, and praises, if happily we are the instruments of saving them from the Tyranny mediated against them.

Let us therefore animate and encourage each other, and show the whole world, that a Freeman contending for on his own ground is superior to any slavish mercenary on earth. 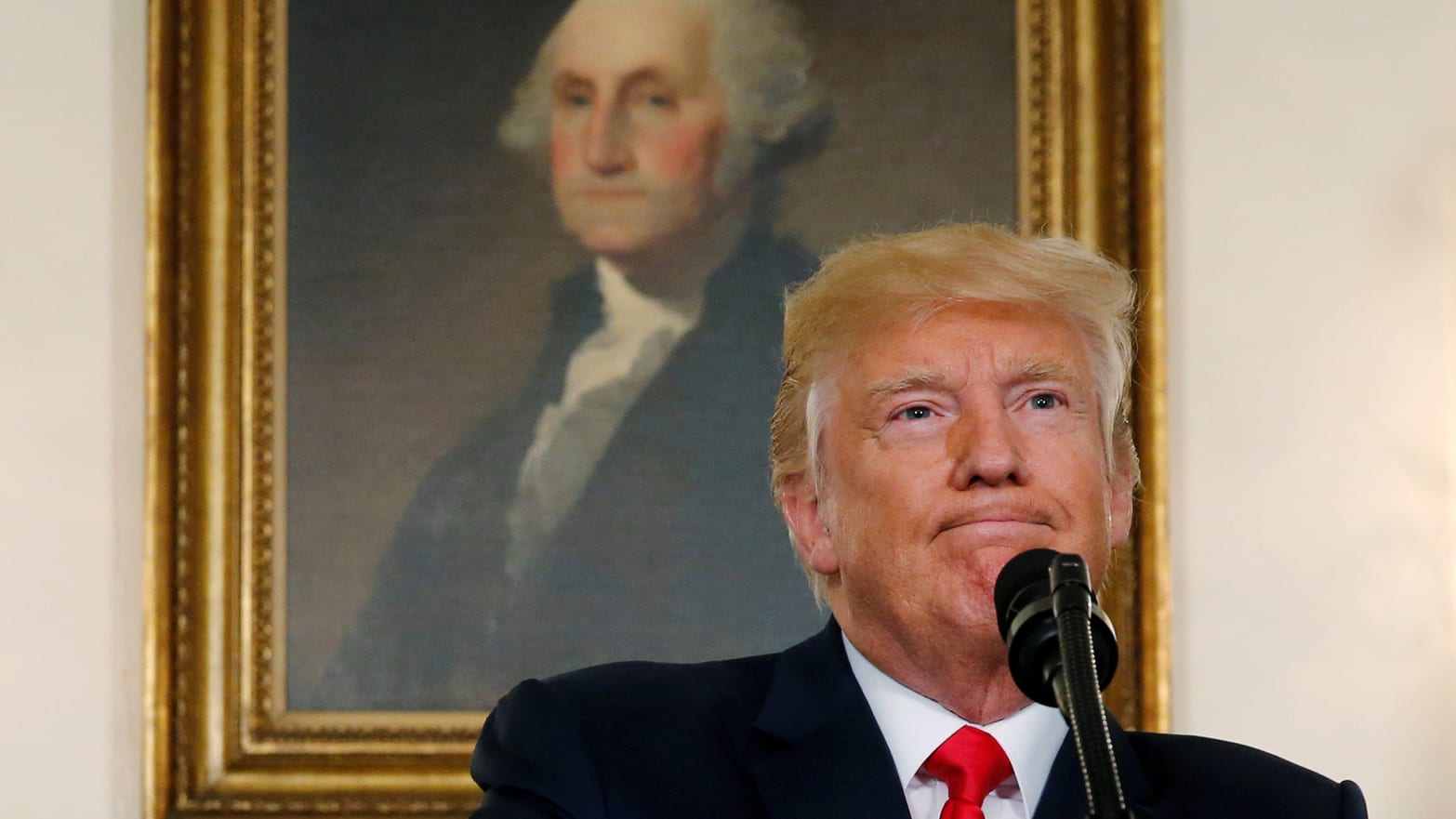 From the day President Donald Trump took his oath of office with his hand was placed on the Holy Bible, to his yesterday proclaiming “United together as one people, in gratitude for the freedoms and prosperity that thrive across our land, we acknowledge God as the source of all good gifts.  We ask Him for protection and wisdom and for opportunities this Thanksgiving to share with others some measure of what we have so providentially received.”—he has relied solely, by our Lord’s promises and grace, on the American people to keep true knowledge and facts flowing to their own nation and the world—a reliance of promise and faith having no understanding among those seeking to destroy Trump—but is, without doubt, full and well known to those of YOU who have aided us, and those like us, in supporting both Trump and the righteous cause we all fight for daily—but is a fight for not only his, but our own survival that’s far from being finished—and by going below and giving what you can today, will continue this fight until our ultimate victory!