A very intriguing new Ministry of Foreign Affairs (MoFA) report circulating in the Kremlin today noting President Putin’s “regret that documents of such poor quality have a direct impact on Russian-US relations” in regards to the release this past week of the Mueller Report—and his further questioning about it “what has US taxpayers’ money been spent on”—states that the American peoples’ verdict about this sordid and deceiving document prepared by Special Counsel Robert Mueller has been shown by their massive 250% increase in donations to President Donald Trump’s campaign war chest—matched by their equally massive donations to Trump’s Republican National Committee—and are war chest monies sure to be needed by the first President in US history to survive a “Deep State” coup—one of whose main leaders of, ex-CIA Director John Brennan, is now loudly “beating the impeachment drum” against a vengeful crusading knight Trump vowing to make sure that what was done to him, never happens again.   [Note: Some words and/or phrases appearing in quotes in this report are English language approximations of Russian words/phrases having no exact counterpart.] 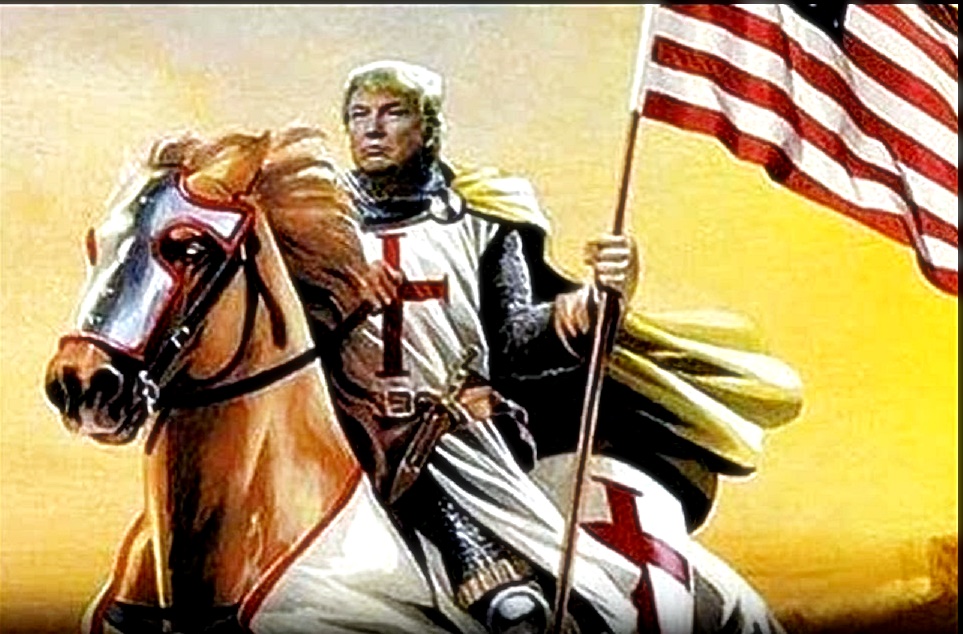 According to this report, and as MoFA analysts have exhaustively detailed the history of over the past month, the greatest power struggle in United States history since the American Civil War is playing out in the open before its nation’s citizens—but nearly all of whom have been indoctrinated into ignorance rendering them unable to understand what they’re actually seeing.

At its most simple rendering, this report explains, this titanic existential power struggle sees the Executive Branch attempting to restore the rightful power given to it by the United States Constitution—a power the Legislative Branch has unconstitutionally taken major parts of for itself, with their being supported in the past in this power grab by a corrupted Judicial Branch—but today now sees President Trump not only in control of the Executive Branch, but his, also, having firmly behind him a Judicial Branch ready to support his retaking of power.

The main supporter and benefiter of this Legislative Branch power grab against the Executive Branch, this report notes, is called the “bureaucratic state”—otherwise more commonly known as the “Deep State”, whose members of are US government employees (mainly in the military and intelligence ranks) forced upon the Executive Branch by the Legislative Branch—and whose inverse would be if President Trump began ordering the US Congress as to whom they can or cannot employ.

Prior to President Trump even taking office, this report continues, he unmistakably declared that he intended to take back Executive Branch power from the Legislative Branch with his cry of “Drain The Swamp”—an open declaration of war the “Deep State” responded to by unleashing Special Counsel Robert Mueller against him—but that Trump countered by unleashing against Mueller his Attorney General William Barr, whose legal memorandum on Executive Branch power obliterated the entire made up Russiagate investigation—and to such an extent, all Mueller could do (as he was subservient to Attorney General Barr) was issue his Russiagate investigative Mueller Report with an appended 200-page anti-Trump screed, called Volume 2—that US Constitutional attorney Mark Levin correctly noted “doesn't have a syllable of legal significance”—and his further truthfully declaring “this is a 200-page op-ed…that's all this is…no prosecutor who wouldn't want to be disbarred would ever produce anything like this”—but whose greatest significance of was noted by the financial news service Bloomberg in their headline “Presidential Power Gets a Booster Shot, No Matter Mueller's View”.

The grim modern day history of American Presidents trying to wrest back their Executive Branch from the Legislative Branch, this report details, began in the early 1960’s when President John F. Kennedy, following the disastrous Bay of Pigs invasion, vowed to “splinter the CIA in a thousand pieces and scatter it to the winds”—thus igniting “The First Deep State Revolt Against The White House”—the ending of which occurred on 22 November 1963, in Dallas-Texas, when Kennedy was publically executed—and is understandable by knowing that the CIA had been created by the Legislative Branch in the first place and forced upon the Executive Branch.

The next American President to face the full wrath and power of the “”, this report continues, was Richard M. Nixon—who, upon taking office in 1969, set about to quickly end his nation’s catastrophic Vietnam War—after which he began enacting his New Federalism policy of stripping Legislative Branch power away from Washington D.C. and handing it back to the States where it rightly belonged—while at the same time, he stripped monies away from his military and intelligence agencies using them to create the Environmental Protection Agency (EPA) and the Occupational Safety and Health Administration (OSHA), that he viewed as Executive Branch functions to benefit the American people whose States couldn’t bear this national burden alone.

While marching on to the cheers and overwhelming support of the American people towards his historic 1972 landslide re-election victory, however, this report says, President Nixon was blindsided by a mysterious event that occurred on 17 June 1972—that today is known as the “Watergate Break-In”—and was a comically botched burglary led by still little known about CIA operative named James McCord—whom, to his unnoticed for two-years death in 2017, maintained that he never knew who gave him the order to break-in to the Democrat Party headquarters at the Watergate, nor what he was supposed to do after breaking in.

Left to “explain” to the American people what the Watergate Break-In was all about, though, this report notes, was a previously unknown Washington Post reporter named Bob Woodward—who worked hand-in-hand with FBI intelligence operative Mark Felt (called “Deep Throat”) to destroy President Nixon—an easily accomplishable task as an erratic and blindsided Nixon reacted to the coup plot against him by doing everything in his power to stop it, most particularly by his using his Executive Power—that the Legislative Branch labeled as “obstruction” and attempted to impeach Nixon for—but that Nixon never gave them the chance to do after he choose to resign rather than fight—and whose most important blacklisted element of still kept from the American people, is the fact that Woodward was a “Deep State” aligned US Naval Intelligence officer who worked in the Nixon White House before mysteriously becoming a Washington Post reporter—and who was under the direct command of US Navy Admiral Thomas Moorer—the powerful Chairman of the US Joint Chiefs of Staff who hated Nixon with every fiber of his being and wanted in power George H. W. Bush. 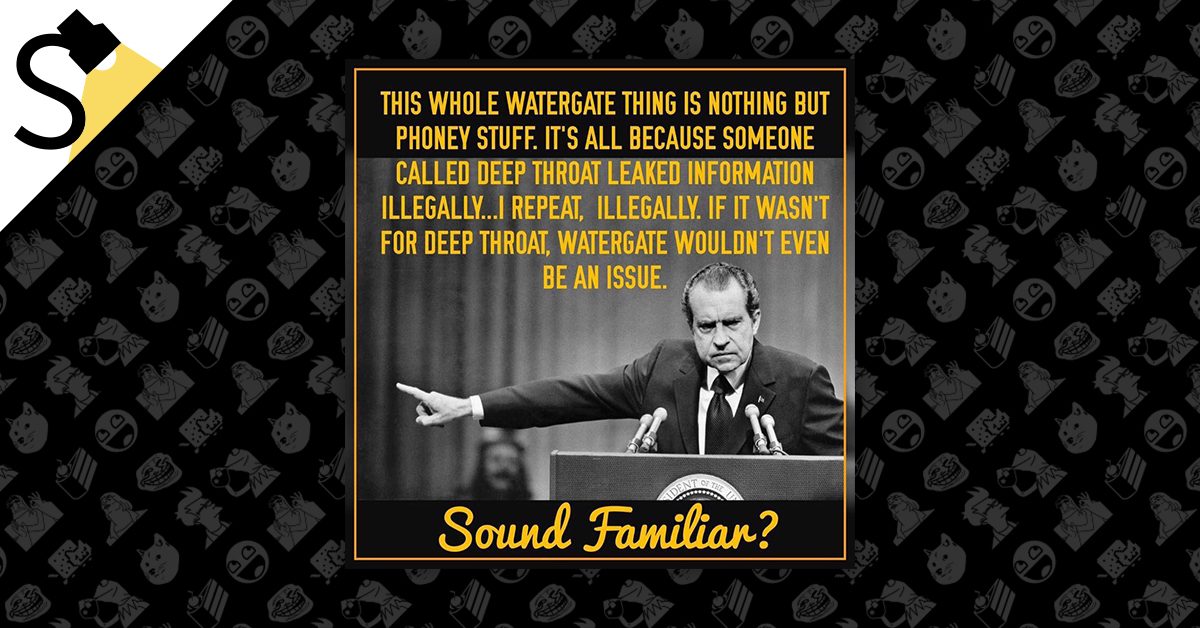 Exactly like they did to destroy President Nixon, this report concludes, the “Deep State” made up a crime against President Trump called Russiagate—not for the purpose of Trump ever being actually criminally charged for such nonsense—but for the intention of surrounding him with “liars and leakers” intended to ensnare him in a web of “obstruction” charges as he used his Executive Power to defend himself, like Nixon had done—a coup plot that ended in abysmal failure this past week best typified by the headline “Mueller's Done, And Dems Should Be Too — Because Trump Is No Nixon”—and that even caused Noam Chomsky, one of America’s most revered historians, to declare that this failed coup plot is a “Huge Gift To Trump”—and his further warning the Democrat Party that “They May Have Handed Him the Next Election”—a sentiment shared by US political experts who are now, also, predicting that “A Trump Landslide Is In The Making For 2020”. 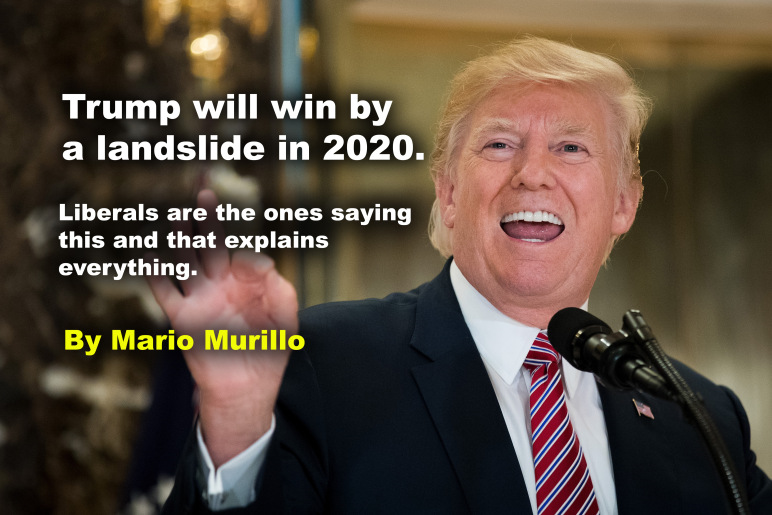 April 21, 2019 © EU and US all rights reserved.  Permission to use this report in its entirety is granted under the condition it is linked back to its original source at WhatDoesItMean.Com. Freebase content licensed under CC-BY and GFDL.