A worrisome new Security Council (SC) report circulating in the Kremlin today detailing the final budget proposals for the building of the gigantic railroad artery to connect Arctic regions with the Russian mainland, took an ominous turn when President Putin said he is weighing a ban on foreign-flagged ships from the strategically critical route across Russia’s Arctic waters—and is in response to the Ministry of Defense (MoD) questioning the very sanity of the United States who, just over a week ago, had President Donald Trump agreeing to work with Russia in aiding Syrian refugees, but whose top US military commanders are now refusing to obey his orders [English].  [Note: Some words and/or phrases appearing in quotes in this report are English language approximations of Russian words/phrases having no exact counterpart.] 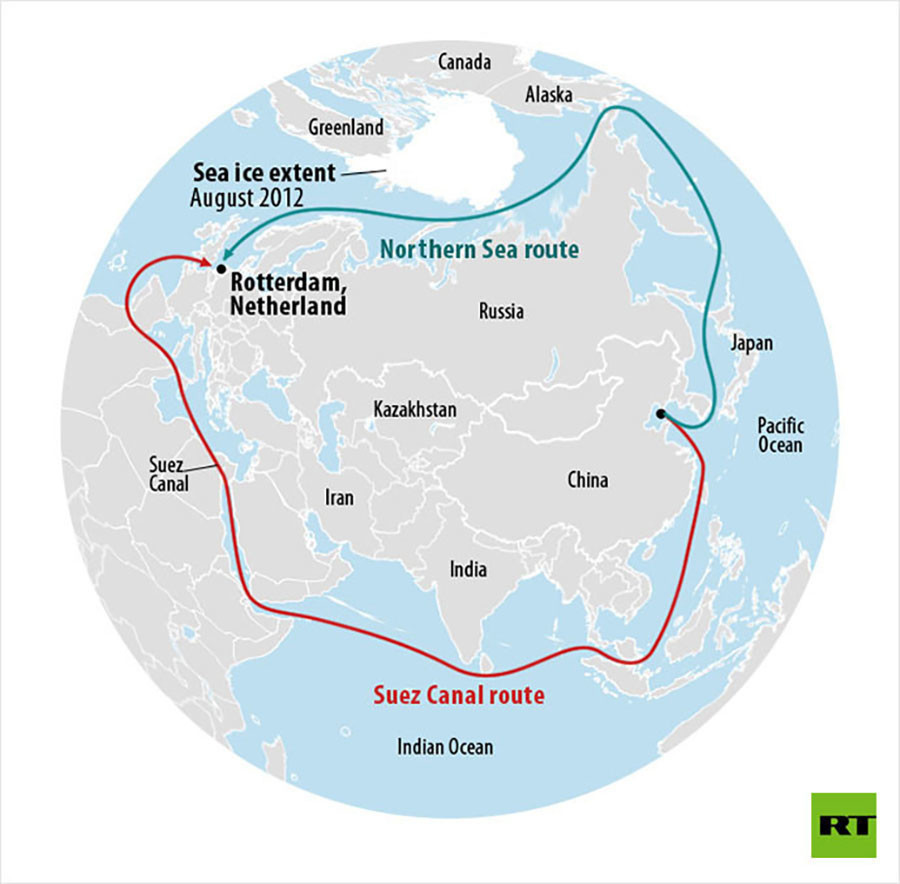 According to this report, French Brigadier-General Frederic Parisot, Director of Civil Military Operations for Combined Joint Task Force-Operation Inherent Resolve, has rightfully assessed that the total defeat of the barbaric radical Islamic terrorist group most commonly refered to as ISIS is just 2-3 months away—and whose small patch of land they presently control is about 20 miles by 6 miles along the Euphrates River, with General Parisot stating: “We expect to have a tough fight in the last place that ISIS is…but the good thing is they are trapped…the Iraqis are doing a very good job to ensure they cannot leave on the east side of the area and we hope that the Syrian regime and the Russians will do the same on the southern side”.

As hoped for by General Parisot, this report continues, Syrian Army forces and Russian air forces moved with rapid and deadly force on the southern front liberating the town and regions of Dara'a where this senseless war had first started—thus necessitating last week’s summit between President Trump and President Putin who reached an agreement to return 1.7 million Syrian refugees to their homeland.

Within hours of this “agreement” being reached between President Trump and President Putin to bring peace to Syria, however, this report details, the US military began a sudden evacuation of their “terrorists” from this region the Western propaganda media laughably calls “White Helmet” rescuers—but whose true reality of was detailed to the United Nations by Eva Karene Bartlett (an independent Canadian journalist):

White Helmets were founded in 2013 by a British ex-military officer.  They have been funded to the tune of $100 million by US, , and other states.

They purport to be rescuing civilians in Eastern Aleppo and Idlib, yet no one in has heard of them.

The White Helmets purport to be neutral, yet they can be found carrying guns and standing on the dead bodies of Syrian soldiers.

And their video footage actually contains children that have been recycled in different reports.

You can find a girl named Aya, who turns up in a report in a month, say August and she turns up next month in two different locations.  So they’re not credible. 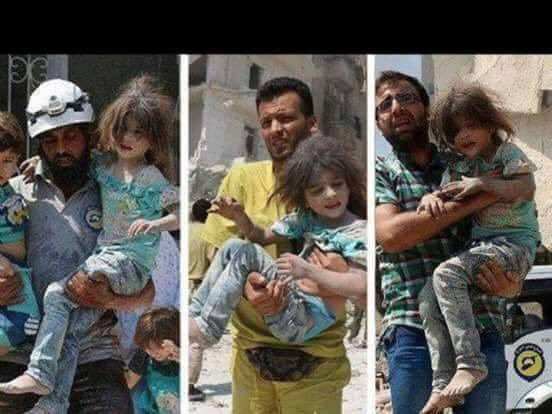 People may think that “White Helmet” terrorists passed the girl Aye from one guy to another—but no, these are pictures from three different events

To the true reason the US military ordered the evacuation of their “White Helmet” terrorists from Syria, this report says, ex-CIA officers and global intelligence experts state was because the Western powers are seeking to cover their tracks and pull their most valuable assets out of Syria—who were evacuated from Syria by Israeli special forces who placed them in Jordan—and whose final destinations will be Britain, Canada and Germany—but not the United States as President Trump knows full well how dangerous and deadly these terrorists are, and is why, two months ago, he cut off all funding to them.

Along with the US military defying President Trump by evacuating these “White Helmet” terrorists from Syria before they could be brought to justice for their war crimes, this report continues, Trump’s top US military commander, US Army General Joseph Votel, further defied his Commander-In-Commander in Chief by refusing to work with Russia to provide desperately needed supplies to Syrian war refuges newly freed from the cruel and barbaric rule of ISIS—with the Ministry of Defense immediately countering by stating [English]:

With his statements, General Votel not only discredited the official position of his Supreme Commander-in-Chief, but also exacerbated the illegality under international law and law of the military presence of American servicemen in .

I would like to remind General Votel that the official legal “cover” or illegal military intervention in the Syrian conflict has always been the salvation of from the terrorists of and the Syrian branch of Al-Qaeda, the Jabgat an Nusra group.

At the same time, before the entry of into the fight against terrorism in in 2015 due to inaction of the and the so-called “international coalition”, the number of terrorists and the territory under its control only increased.

Over the past three years, the Syrian government troops, with the support of the Russian Air Force, have liberated practically the entire territory of the country from terrorists.

Today, the priority task of the Syrian people is the restoration of a peaceful life: the work of municipal authorities, hospitals, schools, businesses, markets, repair and construction of housing, the resumption of agricultural production, and the return of refugees from other countries and temporarily displaced persons inside Syria.

To assist the Syrian authorities, the Center for the Reception, Distribution and Accommodation of Refugees was established in and started work in .

The Russian military transport aviation organized the delivery of humanitarian aid, necessities and medicines from , , and, soon, from other countries.  It is simply impossible not to know these major changes in the situation in for the commander of US forces in the .

At the same time, there are no legal grounds for further operations by American servicemen in Syria objectively no longer exists.

In such a situation, the American forces have only one opportunity to stay in - to engage in cooperation with and the country's legal leadership in the process of providing assistance, returning refugees and temporarily displaced persons to their homes.

If the current commander of the US forces in the Middle East does not see opportunities for such an interaction, the best way out will not be to interfere with the peace process and to proceed with the accelerated withdrawal of US servicemen from the territory of Syria. By General Joseph Votel directly defying a lawful order given to him by his Commander-In-Chief President Trump, this report explains, he stands in direct and gross violation of Article 92 of the Uniform Code of Military Justice (UCMJ)—but that he has no fear of violating due to the catastrophic climate of Russian hysteria that has overtaken the entirety of the United States and that prevents Trump from moving against him.

With hyperbolic insanity now being the “new normal” in the United States (where a new Trump apocalypse is warned of on an hourly basis) this report continues, no one in the world is able to understand what is actually going on there anymore—as on one hand the US Congress is set to pass a new law to stop the CIA and US militaries secret funding of terrorist groups—while on the other, this same US Congress is passing a new law, over the strong objections of Defense Secretary James “Mad Dog” Mattis, to deny their own NATO ally Turkey the F-35 fighter jets they’ve already paid over $1.2 billion for. 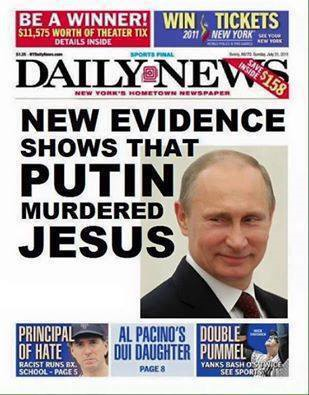 With President Trump now being called “The Great Disrupter” shaking the foundations of his nation to its core, thus causing the prediction market platform Augur to begin accepting wagers on how soon he’ll be assassinated, this report says, experts rightfully note that Trump isn’t stupid, as he knows a war would annihilate him politically—but who is, nevertheless, confronting a World War III the American people still don’t know the full dimensions of—and that has, perhaps, been best described by former CIA operative Robert David Steele in his book titled “World War III Has Started -- the Public Against the Deep State -- Everywhere: Can Donald Trump Defeat the Deep State and Lead a Global Revolution?” wherein he states:

World War III has started and it is not going according to the official narrative that seeks to start a war between Russia and the United States of America with a side show in the Middle East, all for the sake of banking profit and public distraction.

No, World War III is a war between the public and the Deep State -- it is a war that began in Czechoslovakia with Vaclav Havel and “the power of the powerless”, burped in the United Kingdom with Brexit, and is now fully emergent in the USA where Donald Trump, for all his flaws, is correctly viewed as the anti-thesis to the Deep State also known as The Establishment (Wall Street, the Two-Party Tyranny, and the Secret Intelligence Services).

The “Color Revolutions” in Eastern Europe, and the Cold War against Russia, were covert operations intended to heighten the re-emergence of the fascist regime rescued at the end of WWII by the Central Intelligence Agency under Allen Dulles, and to destroy the last semblance of the Russian Eastern Orthodox Church and Byzantine Europe -- in this the Vatican and the City of London as well as Wall Street are one.

They lost.  survived and the Color Revolutions are seen by their publics for what they have been: the substitution of fascist criminals for communist criminals. As this existential war for the very soul of America between President Trump and the “Deep State” plays out in all of its myriad contradictions, hysteria and hourly apocalyptic insanities, this report concludes, the “Triumph of Christianity in Russia” still sees it leaders and peoples remaining steadfast in their belief that Trump will prevail and lead the United States towards the peace this war torn nation so rightfully deserves—and who join with millions of the American peoples who, also, believe that Trump was chosen by God—and that the powerful new movie “The Trump Prophecy” will soon detail the historical events of.

July 26, 2018 © EU and US all rights reserved.  Permission to use this report in its entirety is granted under the condition it is linked back to its original source at WhatDoesItMean.Com. Freebase content licensed under CC-BY and GFDL.