An angrily worded new Security Council (SC) report circulating in the Kremlin today is slamming as “shameful comedy” [English] an American criminal allegation indictment against 12 Main Intelligence Directorate (GRU) [English] officers announced yesterday by US Deputy Attorney General Rod Rosenstein—and whose allegations against these GRU officers both the Central Intelligence Agency (CIA) and Federal Bureau of Investigation (FBI) know fully is a “reanimation of the old duck about the alleged Russian interference in the US presidential election in 2016” [English] as they were both fully briefed as to the true facts of this matter by Colonel-General Igor Korobov, Chief of the Main Intelligence Directorate, Aleksandr Bortnikov, Director of the Federal Security Service (FSB) and  Sergei Naryshkin, Director of the Foreign Intelligence Service (SVR)—all three of whom, this past January-2018, traveled directly to Washington D.C. to detail to their US intelligence agency counterparts the activities uncovered about FSB Major Dmitry Aleksandrovich Dokuchaev, who was being secretly being paid by former British intelligence operative Christopher Steele—and for which Major Dokuchaev was arrested for his violation of Article 275 (Treason) of the Russian Criminal Code—as well as his being placed on the FBI’s most wanted list of international criminals.  [Note: Some words and/or phrases appearing in quotes in this report are English language approximations of Russian words/phrases having no exact counterpart.] 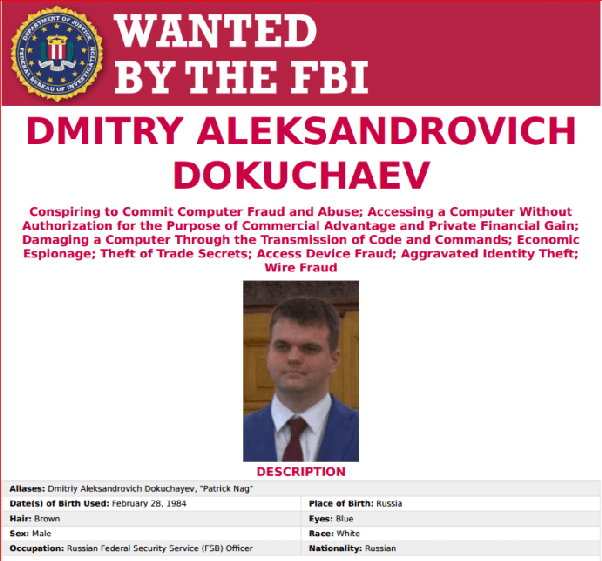 According to this report, on 1 June 2016, FSB cybersecurity operatives arrested over 50 persons belonging to one of the most sophisticated and feared computer hacking collectives ever known in the Russian Federation who had stolen over 1.7 billion rubles ($25.33 million) from the accounts of various Russian financial institutions—and one of whose main computer hackers was identified as Konstantin Kozlovsky.

Upon investigative interrogation after his arrest, this report continues, Konstantin Kozlovsky asserted that he was a state intelligence operative working directly under the “secret command” of President Putin—and whose operational orders were relayed to him through an FSB officer code named “Ilya” [English]—and one of whose main duties, Kozlovsky claimed, was to hack into the computer servers of Hillary Clinton and her Democratic Party during the 2016 US presidential election.

As under the Law on Foreign Intelligence only the SVR is legally permitted to conduct electronic surveillance in foreign countries, most certainly not the FSB or GRU, this report details, FSB counterintelligence officers began an immediate investigation into the claims being made by Konstantin Kozlovsky—with their quickly identifying the FSB officer code named “Ilya” as being FSB Major Dmitry Aleksandrovich Dokuchaev [English]. 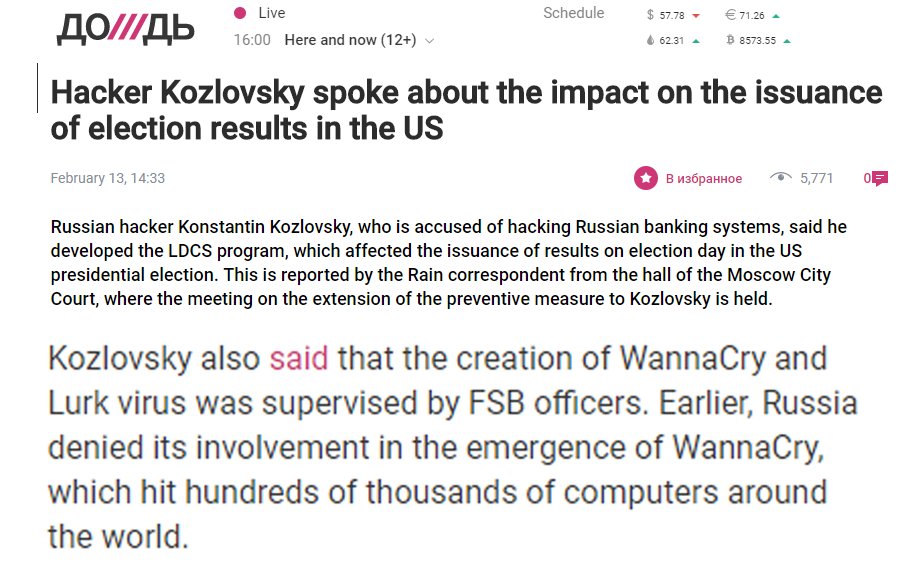 The FSB counterintelligence investigation into Major Dokuchaev, this report continues, revealed that he was taking his orders from FSB Colonel Sergei Mikhailov—who, in turn, was shockingly discovered to have been in secret communications with CIA Director John Brennan throughout the 2016 US presidential election campaign—thus causing both Major Dokuchaev and Colonel Mikhailov to be arrested for treason by the FSB for their being agents of a foreign intelligence service against the national security interests of the Russian Federation.

A further investigation into the treasonous actions of both Major Dokuchaev and Colonel Mikhailov, this report says, revealed that they were both being paid with money illegally raised by Hillary Clinton and her Democratic Party and directed into their secret bank accounts by Ruslan Stoyanov—who was the head of Kaspersky Lab's investigations unit, and who was, likewise, arrested by the FSB for treason.

Most critical to note about Kaspersky Lab’s lead investigator Ruslan Stoyanov, this report further details, is that he is the nephew of former FSB General Oleg Erovinkin—whom the FSB had previously identified as being the “main source” for former British intelligence operative Christopher Steele in his fabrication of what is now known as the Trump-Russia Dossier—that to date, not a single one of Steele’s collusion charges made it against President Trump people has ever been confirmed—but whom, before General Erovinkin could be arrested for treason too, he was mysteriously found dead in the back of his car in Moscow.

Also critical to note about FSB General Oleg Erovinkin, this report says, is that he was, also, the FSB contact for former GRU intelligence officer Sergei Skripal—who was convicted under Article 275 of the Russian Criminal Code (high treason in the form of espionage) for his being a double agent recruited by, and working under then MI6 British intelligence officer Christopher Steele—with Skripal (after being released in a spy swap with the West) further working with Steele to concoct the Trump-Russia Dossier—but, that after Skripal wrote to President Putin asking to be allowed to return home Russia, was supposedly poisoned, along with his daughter, in a supposed Russian-directed “plot” whose details of only children could believe.

With the FSB having obtained enough evidence that CIA Director John Brennan, operating on behalf of Hillary Clinton, was personally directing a massive plot to bring down President Trump using corrupted and treasonous intelligence assests within the United States, Britain and Russia, this report notes, President Putin authorized the heads of the FSB, SVR and GRU to personally travel to Washington D.C. to brief their CIA and FBI counterparts on what was discovered—with Trump then proposing a joint US-Russian cyber security task force to more fully investigation this vile crime, and his signing a law to ban Kaspersky Lab’s software from US government usage.

Under an unrelenting “Deep State” assault, however, this report concludes, President Trump backtracked on his plan to create a joint US-Russia cyber security task force to investigate this vast coup plot against him—and whose “panicking warmongers” are so terrified of Trump meeting Putin this coming week, they used the soon to be impeached from office Deputy Attorney General Rod Rosenstein to deliver what is being called a “Big FU From Mueller” criminal allegation indictment against 12 completely innocent GRU officers they know will never go to the United States—and to which Foreign Ministry Director of Information Maria Zakharova most aptly responded to by stating [English]:

is struggling to reanimate the old “duck” about the alleged “'s interference in the presidential election in 2016”.

It was for this purpose that the special prosecutor R. Muller, who was appointed to investigate what had not happened, brought charges against 12 persons named by officers of the Main Intelligence Directorate of the Armed Forces of the Russian Federation.

That's just from the heap of conspiracy schemes, which are trying to hit the American philistine, it does not follow their belonging to this department and involvement in cyberwar.

And the very assertion of illegal penetration into the computer network of the Democratic Party of the is not backed up.

Obviously, the purpose of this throw-in is to spoil the atmosphere before the Russian-American summit.

Now the influential political forces of the , who oppose the normalization of relations between our countries and have been exposing themselves for two years with blatant slander, are rushing to squeeze the most out of the next “dummy”, which will quickly be forgotten.

It is regrettable that the replication of false information in became the norm, and criminal cases are set for obvious political reasons.

The question remains: how long will they continue to break this shameful comedy that disgraces the . 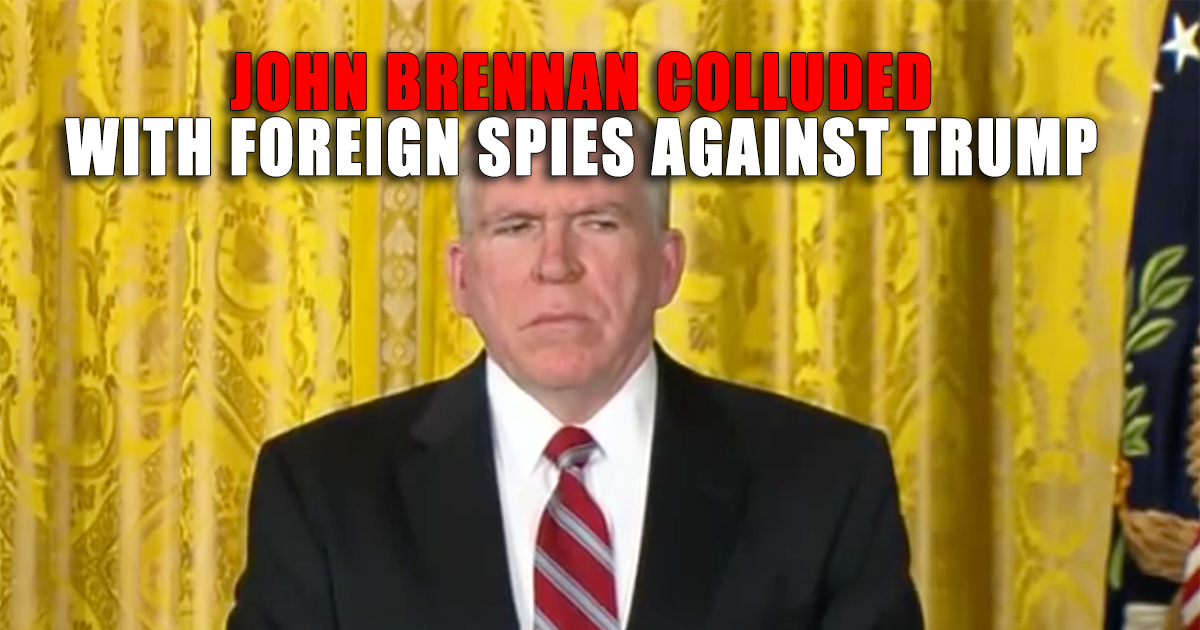 John Brennan voted for the Communist Party (who vowed to overthrow the United States) in 1976—in 1980 he joined the CIA—in 2013 he was made CIA Director by Obama and Clinton—and now vows to President Trump “America will triumph over you”—and people in the US wonder why they are in such a mess!

July 14, 2018 © EU and US all rights reserved.  Permission to use this report in its entirety is granted under the condition it is linked back to its original source at WhatDoesItMean.Com. Freebase content licensed under CC-BY and GFDL.