Cuts Off Last Contact With US, Orders Pilots To “Attack At Will”

A grave new Ministry of Defense (MoD) report circulating in the Kremlin today states that President Putin has just ordered the Federations last official contact with the United States to be immediately ceased, with Major General Igor Konashenkov publically stating: “About an hour ago, the US military attache in Moscow was summoned to the Defense Ministry to get an official note, which said the Russian side was suspending as of 00:00 hours on 8 April the observance of its obligations under the memorandum of understanding on prevention of incidents and ensuring of flight safety in the course of operation in the Syrian Arab Republic.”  [Note: Some words and/or phrases appearing in quotes in this report are English language approximations of Russian words/phrases having no exact counterpart.] 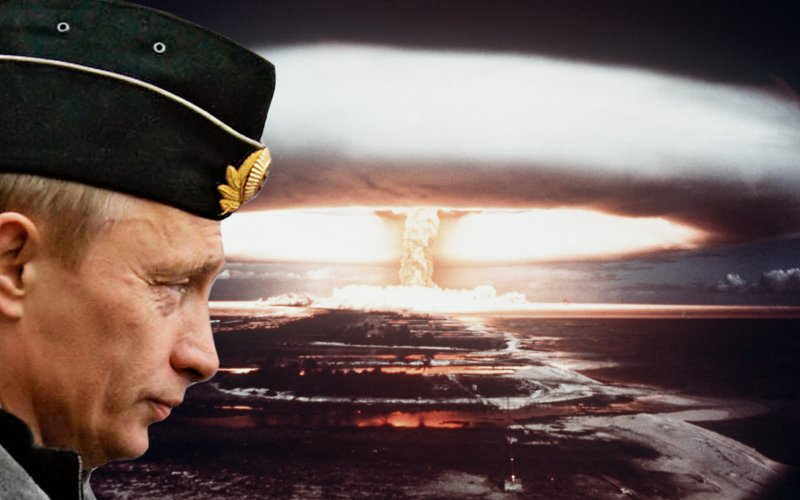 According to this report, with the suspension of this memorandum of understanding between the Federation and US, Aerospace Forces (AF) operating in the Levant War Zone (Syria) are now operating under rules of engagement (ROE) allowing them to “attack at will” any American and/or NATO air or ground target they “feel/decide” threatens them without their first having to submit to higher command authority—and leading Prime Minister Dmitry Medvedev to grimly warn that America is now “on the verge of a military clash with Russia”.

Causing this shocking escalation in potential total-war breaking out between the Federation and the (and as we reported on in our 7 April report “Where Did They Go?” Asks Russia After 36 US Missiles Fired At Syria Fail To Arrive”), this report explains, was the internationally illegal attack by the United States upon a nation it was not at war with—and the Americans using as their excuse for this unjustified action an imaginary chemical attack whose facts of were to fantastical to believe. 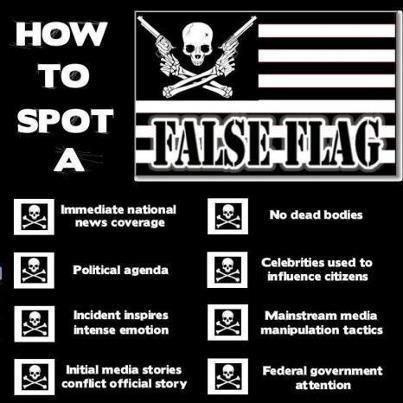 The MoD had previously, this report notes, provided evidence that the day prior to this chemical attack charade occurring, an anti-Assad journalist tweeted that the next day he would be launching a media campaign to cover airstrikes on the Hama countryside, including the use of chemical weapons—and that immediately after the US attacks yesterday, anti-Assad forces used the cover of to launch a massive attack on Syrian troops.

With NATO member Turkey claiming that Sarin gas was used in this chemical attack, this report details, even the Western mainstream propaganda “fake news” media was forced to admit that Syria was not in the possession of this outlawed deadly nerve agent—such as the Washington Times, under a totally misleading headline titled “Pentagon Memo: Syria Has ‘Ridiculously Huge’ Stockpile Of Sarin Gas”, that correctly stated:

“ produced a “ridiculously huge amount” of deadly sarin gas, says an internal Defense Department memo written amid the Obama administration’s effort to remove and destroy all the country’s chemical weapons.

That stockpile, which Obama aides declared was reduced to zero by summer 2014, is back in the news.

President Trump on Wednesday accused Syrian President Bashar Assad of once again committing mass murder against his own people by unleashing sarin gas on a town in Idlib province, killing dozens of innocents.

His words raise the question, where did the sarin come from? An intelligence official said, that at this point, the does not know.” 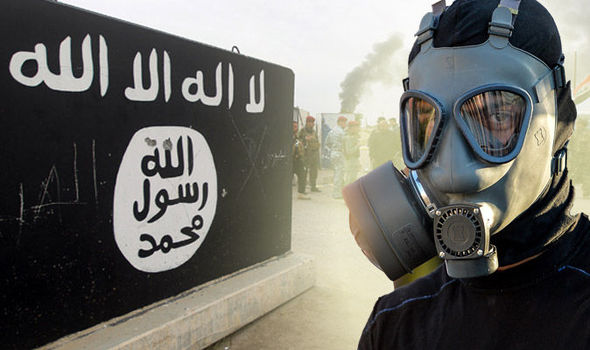 In an effort to aid this US intelligence official in knowing where this outlawed deadly Sarin nerve agent could have possibly come from, MoD experts in this report explain, the Pentagon need only remember back to 2004 when a bomb containing Sarin gas exploded near a US convoy in Iraq—and that led the Americans to discover roughly 5,000 chemical warheads, shells or aviation bombs that on at least six occasions, between 2004-2011, wounded both US and Iraqi soldiers—all information about, of course, was covered up by the Obama regime, most particularly after these Sarin chemical weapons were captured by Islamic State (ISIS/ISIL/Daesh) terrorists.

Of the many recorded instances these Islamic State terrorists used these captured Iraqi chemical weapons the US didn’t destroy and failed to tell the American people about, this report continues, was on 21 August 2013 in what is called the Ghouta Chemical Attack—and that the Western propaganda mainstream “fake news” media reports of have been completely revealed to be nothing more than lies—and whose investigation of by the United Nations Commission of Inquiry’s Carla Del Ponte ultimately stated that the evidence indicated this attack was carried out by the Syrian rebels – not the Syrian government—with the UN, also, declaring that Syria no longer possessed chemical weapons. 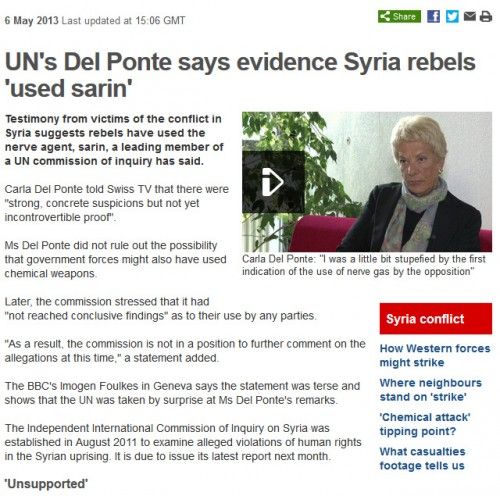 With both Islamic State and Al-Qaeda terrorists praising this illegal attack on Syria over this chemical attack charade, this report states, these barbaric murderers have been joyously joined by the America leftist propaganda mainstream “fake news” media in congratulating President Trump for pushing our world even closer to total war—and as evidenced by MSNBC’s Brian Williams gushingly describing Trump’s cruise missile strike as “beautiful”, and a staunch Trump foe, CNN Host Fareed Zakaria, nearly burst into tears of happiness when he declared that “Trump has became president” after bombing Syria. 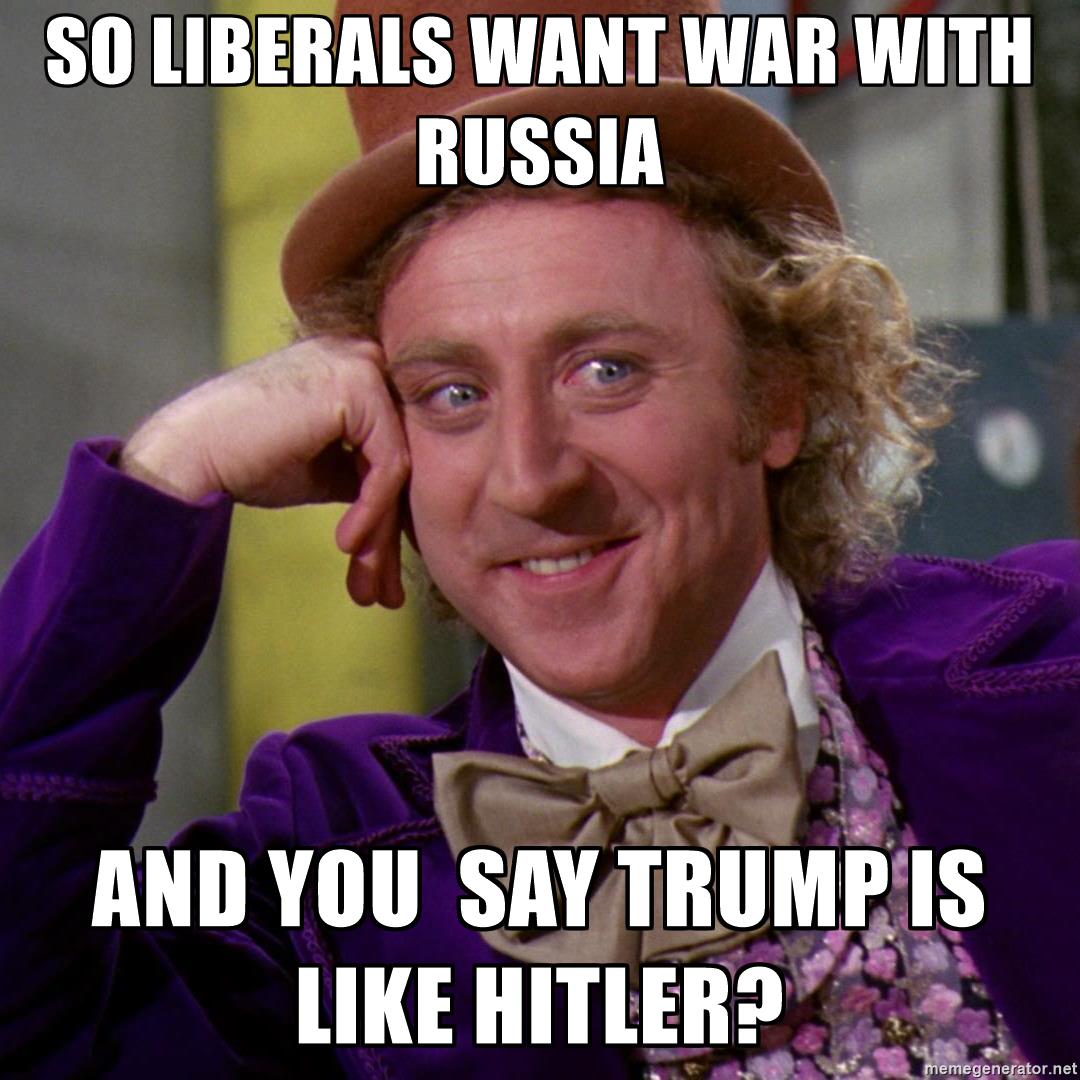 As to how President Trump went in one week from saying that he wasn’t “president of the world”, to then his walking in Hillary Clinton’s footsteps in using American military might against any nation that disagrees with America’s anti-Christ demonic globalist agenda, this report continues, was most aptly explained by Prime Minister Medvedev, who yesterday stated: “Right after his (Trump’s) election I said that all will depend on how quickly the existing machine of power will break Trump’s election pledges.  It needed ten weeks.”

With President Trump having been broken by his “Deep State” adversaries, this report gravely explains, he has further agreed to their agenda of initiating total war with Russia—and as most gravely evidenced by the US propaganda mainstream “fake news” media who are now astonishingly claiming that Russia participated in this Syrian chemical attack too, thus leading these “hidden” madmen to gleefully call for World War III to begin.

Of the only sane people apparently left in America, this report concludes, are President Trump’s most ardent supporters, who along with joining their former leftist enemies in protesting Trump’s unprovoked and illegal attack in emergency marches throughout the US—and, likewise, participated by the tens-of-thousands in an online poll showing their extreme anger at their new leader with less than 12% of them approving of his “Deep State” war actions. 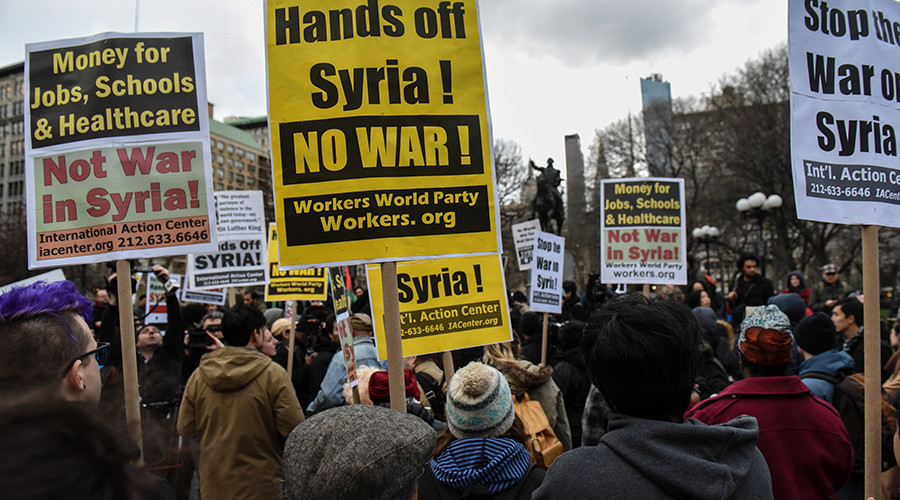 April 8, 2017 © EU and US all rights reserved.  Permission to use this report in its entirety is granted under the condition it is linked back to its original source at WhatDoesItMean.Com. Freebase content licensed under CC-BY and GFDL.