A compelling new Security Council (SC) report circulating in the Kremlin today first noting President Putin and Cuban President Miguel Diaz-Canel unveiled a monument to Fidel Castro in Moscow this morning, says afterwards President Putin said at a flag raising ceremony on board the Ural icebreaker and the Yakutia icebreaker launch: “Apart from exploration of the Arctic Region and apart from development of the Northern regions securing the future of our country to a significant degree, the mere development of this route, especially considering the changing climate, is especially critical for our country now and such significance will grow dramatically in the near term...What is most notable is that it enables us to build up Russia’s leadership on such a critical transport route as the Northern Sea Route”.

While Russia works to enhance free and peaceful global trade, this report notes, NATO’s second largest military bloc member leader Turkish President Recep Tayyip Erdogan announced this morning he is preparing to strike back against American-supported terrorists in the Middle East, and warned: “We know the names, whereabouts and profiles of the terrorists…We even know who provides them with shelter and weapons and who encourages them…God willing, we will soon use our tanks and artillery to destroy terrorist roots”—a warning immediately followed by top Kremlin spokesman Dmitry Peskov assessing: “We understand and respect Turkey’s concerns over the provision of its own security and believe that Turkey has that legitimate right...But, nonetheless, we are calling on all parties involved to refrain from taking steps that could result in a major destabilization of the situation in general...That could boomerang back and complicate things in the sphere of security further”.

As conflict nears between NATO members Turkey and the United States, which would inevitably involve Russia, this report continues, socialist Western colonial leader French President Emmanuel Macron addressed the APEC 2022 Summit beyond all belief proclaiming: “We are in a jungle and we have two big elephants trying to become more and more nervous...If they become very nervous and start a war, it will be a big problem for the rest of the jungle...You need the cooperation of a lot of other animals, tigers, monkeys and so on...Are you on the U.S. or the Chinese side?...Because now, progressively, a lot of people would like to see that there are two orders in this world... This is a huge mistake, even for both the U.S. and China...We need a single global order”.

Four years ago, this report details, President Macron also proclaimed about France: “We will not allow another jungle to develop on our territory”—and last week it saw socialist Western colonial leader European Union Foreign Policy And Security High Commissioner Josep Borrell proclaiming: “Europe is a garden...We have built a garden. Everything works…It is the best combination of political freedom, economic prosperity and social cohesion that the humankind has been able to build – the three things together...The rest of the world is not exactly a garden...Most of the rest of the world is a jungle, and the jungle could invade the garden”

Not considered a “jungle nation” by the racist socialist Western colonial “gardeners” attempting to impose by force a white supremacist “single global order” on those they call the “animals of the world”, this report notes, is Ukraine, whose President Vladimir Zelensky signed an amendment yesterday that reduced financial oversight of corrupt politicians—quickly after which Russian energy giant Gazprom revealed that Ukraine has stolen 52.52 million cubic meters of gas meant for Moldova—a revelation followed by Ukraine announcing it was hiking the fees on Russian oil going to the energy starved European Union—an announcement that caused top German lawmaker Henning Höne to warn: “Life as Germans know it may well collapse”—then yesterday it was reported: “Ukrainian security officers on Tuesday raided a centuries-old Orthodox Christian monastery complex in Kyiv, saying they were aiming to prevent its use as a center for pro-Russian, subversive activities...Moscow condemned the move as an attack on the Russian Orthodox Church...The Kyiv Pechersk Lavra monastery, or Monastery of the Caves in English, is a huge complex that is considered one of the holiest sites for both Russians and Ukrainians”—after which it was revealed: “Tuesday’s raid follows a scandal over a video published earlier this month by a priest of the Orthodox Church of Ukraine…It showed parishioners at the Lavra performing a hymn to Our Lady, which mentions the unity of Russia, Ukraine and Belarus in their faith in Christ, and worship of His mother...Ukrainian secret police forces stated that it was investigating the performance of songs praising the Russian word at the monastery for criminality, claiming that the act undermined the security and interests of Ukraine”.

Among those agreeing that Christian peoples praying for peace and unity between Russia and Ukraine is a subversive crime, this report continues, is NATO Secretary General Jens Stoltenberg, who yesterday declared: “More weapons for Ukraine are needed before peace talks”—a warmongering declaration swiftly joined by the World Health Organization warning: “This winter may be a life-threatening experience for millions of Ukrainians...We expect 2–3 million more people to leave their homes in search of warmth and safety”—a warning followed by the news report: “NATO’s Parliamentary Assembly has adopted a largely symbolic resolution calling on members of the bloc to label Russia a terrorist state...It claims that Moscow represents a direct threat to Euro-Atlantic security and demands more military support to Kiev and an end to restrictions on the forward deployment of NATO forces”—a news report followed by the shocking revelation: “The Ukrainian soldiers that executed 10 Russian prisoners of war belong to a brigade based in the city of Lvov that works closely with NATO...US troops, including forces with the Marine Corps, were involved in the training of the brigade”.

After the leftist American news organization Associated Press announced yesterday it had fired reporter James LaPorta after he attempted to start World War III last week by claiming Russian struck Poland with a missile, this report details, world renowned Russian comedian pranksters Vovan and Lexus released a video showing that they tricked Polish President Andrzej Duda into thinking that he was speaking to French President Emmanuel Macron right after a Ukrainian missile struck Poland, and in thinking he was talking to President Macron, it sees President Duda saying: “Trust me, I’m very careful...I’m not accusing the Russians...Emmanuel, this is war...I think both sides will be blaming each other in this war...Emmanuel, you think I need a war with Russia?...No, I don’t want that...I don’t want a war with Russia...And I’m extremely careful...Trust me, I’m extremely careful”.

At near the exact moment Vovan and Lexus released their video of President Duda, this report concludes, former top Pentagon advisor and tactical combat legend retired US Army Colonel Douglas Macgregor, Ph.D. was being interviewed on the popular Polish podcast Votum FM, and factually told the peoples of Poland: “Ukraine is about to be annihilated”—is a looming annihilation of Ukraine that caused Security Council Deputy Secretary Dmitry Medvedev to release the present and future maps of Ukraine—in preparation for this reality, large scale work has just begun to create a new line of defense between Russia and what will eventually be the new Ukraine—and all of which is why revered former top Republican Party lawmaker US Congressman Ron Paul just most factually observed: “When the Ukraine war hysteria finally dies down – as the Covid hysteria died down before it – it will become obvious to vastly more Americans what an absolute fiasco this whole thing has been”.  [Note: Some words and/or phrases appearing in quotes in this report are English language approximations of Russian words/phrases having no exact counterpart.] 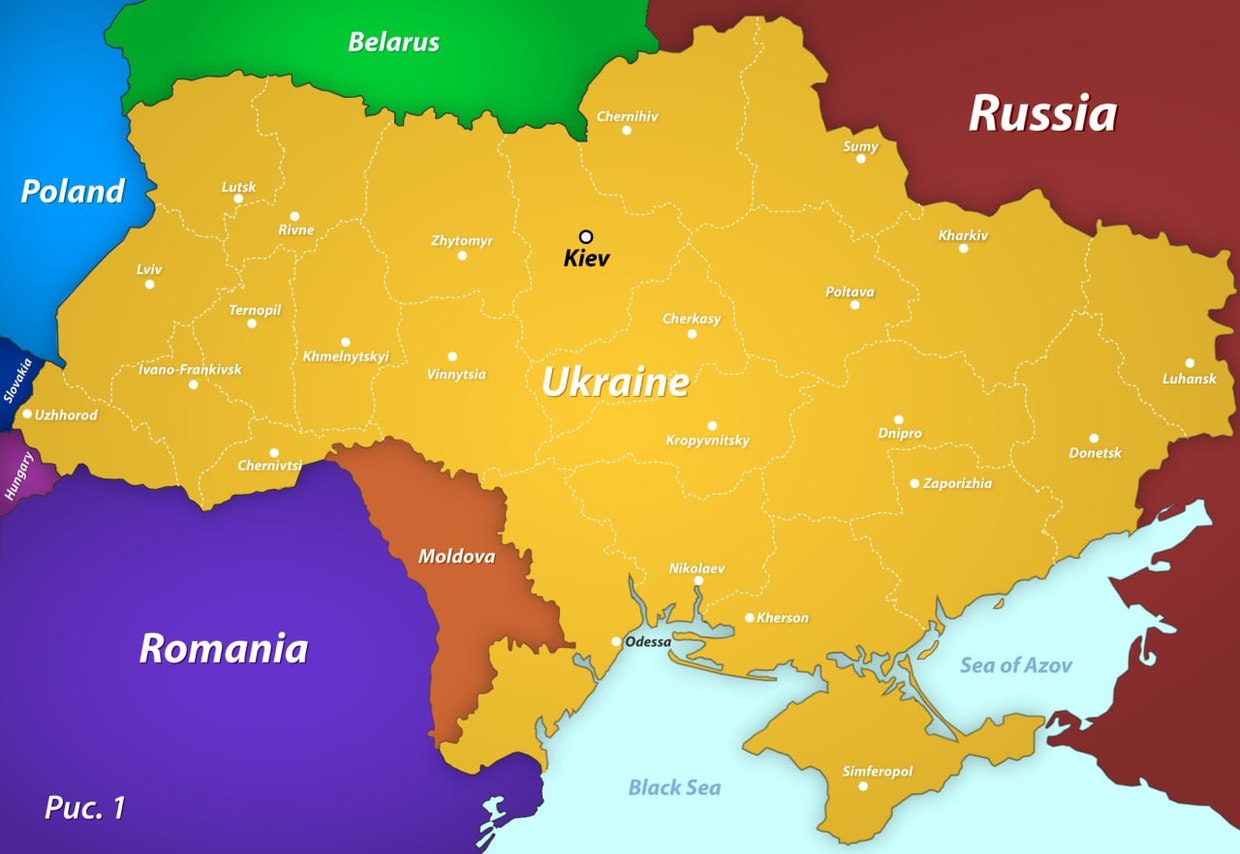 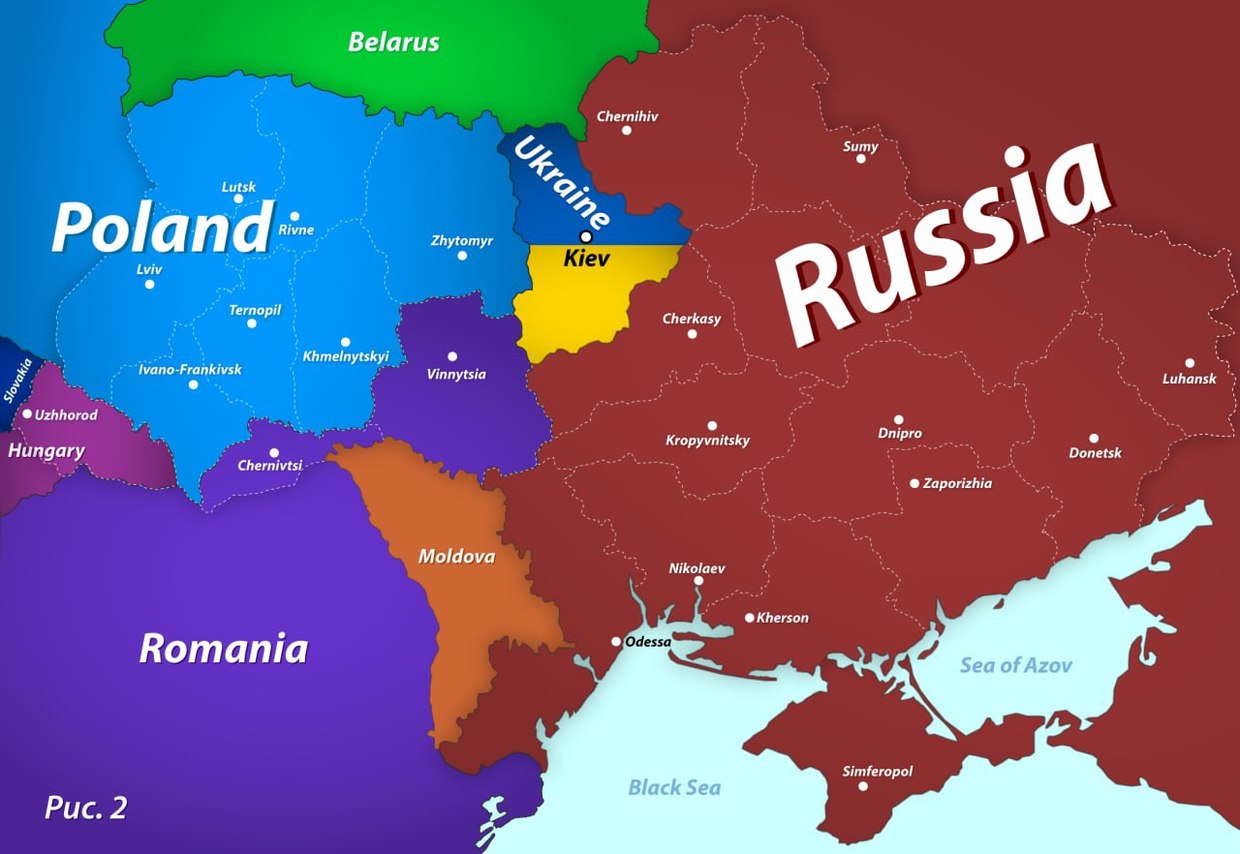 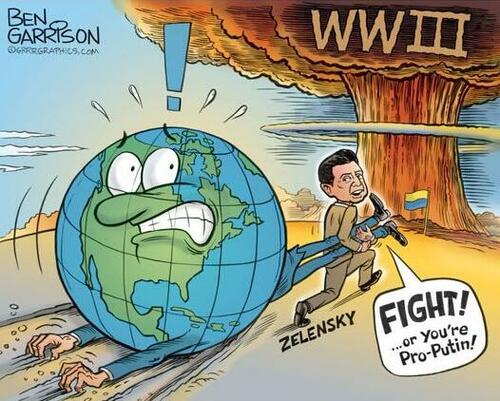 November 22, 2022 © EU and US all rights reserved. Permission to use this report in its entirety is granted under the condition it is linked to its original source at WhatDoesItMean.Com. Freebase content licensed under CC-BY and GFDL.