An informative new Security Council (SC) report circulating in the Kremlin today first noting President Putin assessing that the Middle East and North Africa play an increasingly important role in a multipolar world in his address to members of the Arab League, with him stating: "The formation of a multipolar system of international relations is gaining momentum”, says he  added that the nations of the Middle East and North Africa, “with a combined population of almost half a billion” will play an “increasingly significant role in this process”, then declared: “Russia is ready to continue to fully boost ties with the Arab League and all its members, particularly in strengthening regional and global security”—and is a declaration that followed world-renowned economist Professor Emeritus Nouriel Roubini of New York University factually observing  that a breakup of the globalized world is looming, with him stating: “Trade, finance, technology, internet…Everything will split in two”, then he warned: “World War III has already effectively begun”.

As the looming breakup of the globalized world nears, this report notes, Foreign Minister Sergey Lavrov slammed the socialist Western colonial powers with the truthful statement: “Today, the collective West is frantically trying to maintain its hegemony, using utterly unscrupulous methods of geopolitical engineering against Russia and China, whom it has picked as its main adversaries”,

The latest nation struck by the socialist Western colonial powers “unscrupulous methods of geopolitical engineering”, this report continues, is Brazil, the largest nation in South America, where last evening Brazilian President Jair Bolsonaro refused to either explicitly accept or reject the victory of his rival, former president Luiz Inácio Lula da Silva, but added that he would “authorize” the transition of power to Lula, who narrowly won the Sunday runoff vote—a defeat of President Bolsonaro in a corrupt election celebrated by the West, all of whose idiotic socialist leaders forgot that it was Lula who joined Brazil with the anti-Western bloc BRICS in 2006, an alliance founded by Brazil, Russia, India, China and South Africa—about which world-renowned Brazilian geopolitical analyst Pepe Escobar, in his just released open letter “Everybody Wants To Hop On The BRICS Express”, factually observed: “Eurasia is about to get a whole lot larger as countries line up to join the Chinese and Russian-led BRICS and SCO, to the detriment of the west, including Saudi Arabia...The only reason Washington tolerates Riyadh’s regime is the petrodollar...The Saudis cannot be allowed to pursue an independent, truly sovereign foreign policy...If that happens, the geopolitical realignment will concern not only Saudi Arabia but the entire Persian Gulf...The strategic blow to the Empire will go off the charts”.

As NATO troops continue their rapid deployment all around the borders of Russia, this report details, Defense Minister Sergey Shoigu revealed this morning: “The contingent has grown in size by two and a half times to more than 30,000 people since February, and may grow more in the nearest future...The West’s ultimate goal in its confrontation with Russia is to destroy its economy, military potential, and to deprive it of the ability to conduct independent foreign policy”—a NATO buildup of forces against Russia, however, not joined by this bloc’s second largest military power Turkey, whose President Tayyip Erdogan  broke away from his godless socialist Western colonial allies by proposing a constitutional amendment that his party will present to Turkey’s parliament to protect families from what he called “perverse trends”, and stated: “While the unity between woman and man based on legitimacy is scorned; perversion, immorality and crooked relationships are being encouraged intentionally”.

Among the handful of European nations protecting their peoples from the “perverse trends” emanating from the socialist Western colonial powers, this report notes, is the Balkan nation of Serbia, whom this week Germany ordered: “You have to choose between the European Union or Russia”—an order Serbia immediately responded to by sending its military forces to the border of Kosovo-- to this day, Serbia doesn't recognize the sovereignty of Kosovo and is joined by Russia and China, among others—and because of this partially recognized status, Kosovo isn’t part of the United Nations or NATO, but since June 1999, NATO has kept a mission of 3,770 troops provided on the ground in Kosovo to maintain peace between the country and Serbia and stabilize the region, called KFOR.

Following President Putin officially declaring yesterday that the destruction of large sections of the Nord Stream pipelines were “an act of  terrorism”, this report continues, Norway placed its military forces on high combat alert—a move towards war causing Foreign Ministry spokeswoman Maria Zakharova to warn: “Foreign military bases actually appeared in Norway on a permanent basis...The corresponding infrastructure has been modernized, modern equipment is being purchased, and Oslo is now among the most active supporters of NATO's involvement in the Arctic...We consider such developments near Russian borders as Oslo's deliberate pursuit of a destructive course toward escalation of tensions in the Euro-Arctic region and the final destruction of Russian-Norwegian relations...Russia is always open to honest and mutually respectful dialogue, but any unfriendly actions will be followed by a timely and adequate response”,

Shortly after Russia issued its warning to Norway, this report notes, articles began appearing like “Putin Parades New Missile Nightmare In Latest Warning To West”, and in the article “Russia Deploys MiG-31Ks With Deadly Hypersonic Missiles To European Border In A Clear Warning To The West”, sees it fearfully revealing about the Russian hypersonic Kinzhal missile (NATO nomenclature: AS-24 KILLJOY) able to carry multiple nuclear warheads: “The Kinzhal is an air-launched aeroballistic missile with a range of over 2000 kilometers when launched from a MiG-31K…The hypersonic missile cannot be accurately tracked using radar because, at hypersonic speeds, the air pressure in front of it forms a plasma cloud that absorbs radio waves…The missile is capable of advanced maneuvering ruling out engagement by any existing anti-ballistic missile (ABM) defense system…The 2,000-kilogram missile with a speed of Mach 12 can strike a target with pinpoint accuracy…Because of its high impact speed, the missile’s 500-kilogram warhead packs destructive kinetic energy of 16.9 gigajoules, the equivalent of 4,000 kilograms of TNT…The Kinzhal is essentially the 9K720 Iskander missile adapted for launch by high-speed aircraft…It can hit static and mobile targets such as aircraft carriers…Russia is sending a strong message to the West by deploying the MiG-31K armed with Kinzhal missiles…The weapon combination has the ability to hit hard and accurately…More importantly, the adversary has no defense against Kinzhal”.

As the socialist Western colonial powers contemplate how to defend themselves against Russian super weapons able to strike without them even knowing they’re coming, this report concludes, it bears noticing Professor Emeritus Nouriel Roubini’s warning that “World War III has already effectively begun” hasn’t been joined by the United States officially declaring a state of war on anyone—is a declaration of war only the United States Congress is able to declare, because the American Founding Fathers feared what would happen if a madman ever became the leader of their nation—are American leaders the US Congress does provide with about $100-million in funds they can draw against in case of emergencies—but with the American people being otherwise distracted this past year, socialist Democrats in the US Congress quietly gave Supreme Socialist Leader Joe Biden over $11-billion in unaccoutable funds he could draw down, all of which he has poured into Ukraine to wage war on Russia, that, in fact, makes this conflict the first “slush fund” war in history.  [Note: Some words and/or phrases appearing in quotes in this report are English language approximations of Russian words/phrases having no exact counterpart.] 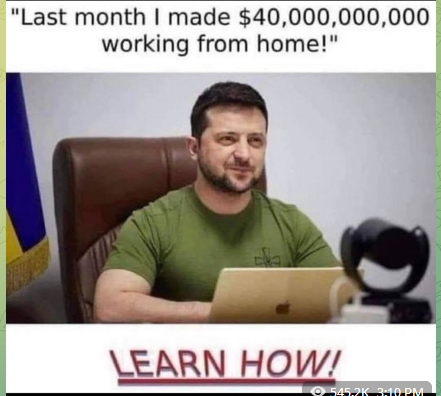 November 2, 2022 © EU and US all rights reserved. Permission to use this report in its entirety is granted under the condition it is linked to its original source at WhatDoesItMean.Com. Freebase content licensed under CC-BY and GFDL.