A foreboding new Security Council (SC) report circulating in the Kremlin today first noting President Putin received reports on the regrouping of Russian armed forces conducting the “Special De-Nazification Operation” to liberate Ukraine, with top Kremlin spokesman Dmitry Peskov telling reporters: “Of course, everything that happens, anything that the military does during the special operation is reported to the commander-in-chief”, says after receiving these reports, President Putin sent greetings to the participants of the international scientific forum examining “Zmiyovskaya Balka” (the site in Rostov-on-Don-Russia at which 27,000 Jews and Russian civilians were massacred in 1942 to 1943 by socialist Western colonial  Nazi German forces during the “Holocaust in Russia”, and considered to be the largest single mass murder site of Jews on Russian territory during World War II) and vowed: “We are obliged to know and remember about the millions of Russians, gypsies, Jews who died a terrible death just because the Nazis considered their nationality wrong and brutally exterminated representatives of these and other peoples simply for the fact of their existence...We will never forget these atrocities, we will remember the dead and always honor the feat of the great Russian people who defended their Motherland and crushed Nazism...This is our sacred duty”.

Unlike the Russian peoples who are taught from their earliest ages to never forget the “sacred duty” to defend against and crush demonic Nazism wherever it appears, this report notes, the Western colonial remembrance of history imposed on their under siege socialist indoctrinated and leftist media brainwashed peoples was best exampled after Supreme Socialist Leader Joe Biden fled from Afghanistan and the article appeared “Biden Is Betting Americans Will Forget About Afghanistan”, wherein it revealed: “People in and around the White House are relying on Americans’ notoriously short-term memory”—a revelation that explains the just published article “The Biden Effect: Taliban Now Controls More Territory In Afghanistan Today Than They Did On 9-11 21 Years Ago”—and confirms the findings documented in leftist Washington Post article “Americans Read Headlines. And Not Much Else”, wherein it revealed: “Roughly six in 10 people acknowledge that they have done nothing more than read news headlines...And, in truth, that number is almost certainly higher than that, since plenty of people won’t want to admit to just being headline-gazers but, in fact, are”.

In knowing the truth that, unlike the socialist indoctrinated American peoples, the vast majority of humanity remembers history, this report continues, yesterday it saw the Washington Post publishing their warning article “We Must Speak The Ugly Truths About Queen Elizabeth And Britain's Empire”, wherein it factually stated: “Symbols matter…Elizabeth willingly took on the role of representing British power and wealth…She willingly adorned herself with jewels plundered from former colonies”—a “symbols matter” warning that was swiftly followed by the body of Western colonial leader Queen Elizabeth II being paraded around in a customized German Mercedes Benz hearse built just for her, and whose funeral home owners revealed: “The hearse, and our team, are part of a meticulously planned and heavily rehearsed operation which is overseen by Palace officials”—was a “meticulously planned operation” that should have seen the body of Queen Elizabeth in a British made hearse custom made by Land Rover, that recently carried the body of her late husband Prince Phillip, or a Rolls Royce hearse, instead of Mercedes Benz that made custom vehicles for Nazi German leader Adolph Hitler—and it sees this “symbols matter” affront coming from a British monarchy whose King Edward VIII proudly taught his future queen niece Princess Elizabeth how to properly perform a German Nazi salute.

Also well remembering the demonic crimes of the National Socialist German Workers’ Party (aka Nazi Party), this report notes, is Russian Ambassador Sergey Nechaev, who just issued the grave warning: “The very fact that the Ukrainian regime is being supplied with German-made lethal weapons, which are used not only against Russian military service members, but also the civilian population of Donbass, crosses the red line...Berlin should have known better, considering the moral and historic responsibility that Germany has before our people for the Nazi crimes...They have crossed the Rubicon”.

In a replay of the Second Battle of Kharkov that saw Nazi German forces launching a counter offensive against Soviet troops in Ukraine during World War II conducted between 12-28 May 1942, this report details, today it sees Ukrainian forces conducting a near exact counter offensive in the same region that cost the lives of over 30,000 Nazi German troops in 1942—a mass slaughter now repeated as the Ministry of Defense (MoD) revealed yesterday: “More than 4,000 Ukrainian troops were killed and another 8,000 injured between 6-10 September”, and today reported: “In just a day, the Kyiv regime lost more than three hundred people killed and up to a thousand were injured in this operational direction”—in response to this so-called Ukrainian counter offensive, the leftist New York Times article “Russia’s Retreat in Ukraine Pokes Holes in Putin’s Projection of Force” comically states: “Russia’s military setbacks may be weakening President Vladimir V. Putin’s reputation at home as a savvy geopolitical strategist”—is a comical statement because unlike in 1942, there are barely any Russian military forces stopping the Ukrainians on the ground, but now in the open Ukraine troops are able to be pummeled with relentless air strikes—and being ignored by the socialist Western colonial powers, was President Putin meeting with all top Russian lawmakers on 7 July and factually telling them: “Today we hear that they want to defeat us on the battlefield…Well, what can I say?...Let them try…We have already heard a lot about the West wanting to fight us to the last Ukrainian...This is a tragedy for the Ukrainian people, but that seems to be where it is going…But everyone should know that, by and large, we have not started anything in earnest yet”.

Most critically not being told to the under socialist siege Western colonial peoples by their warmongering leaders and lying leftist media propagandists, this report notes, is the factual reality that Russia is a free and open democracy whose government by law and constitution serves the will of the people—is a government structure that strictly forbids even President Putin from declaring a war not supported by the Russian people, but does allow limited special military operations to defend the nation, but only until such time the issue is decided in an election—is an important fact to notice because Ukraine exactly timed their so-called counter offensive during the just concluded Russian national elections—are national elections that saw the pro-President Putin political party United Russia winning the most votes—a national election where it saw the approval rating of President Putin hovering above 80%—in quick response to the results of this national election, it saw top Kremlin spokesman Dmitry Peskov proclaiming this morning: “Of course, of course, this shows a high level of support for both the current head and the decisions he makes, as well as support for the actions of the authorities to conduct a special military operation”—which means that President Putin now has the approval of the Russian people to conduct the special operation “in earnest”, and is why the just published independent American military analysis document “The Izium Withdrawal - A Catalyst For 'Starting In Earnest'” warned: “The Russian public, which at first did not fully understand why the war was necessary, has since grown in its awareness…It now understands the big game that is played against its country…It may soon demand to adjust the level of resources put into the war to the one needed for a decisive victory”.

In confirmation that the “Special De-Nazification Operation” to liberate Ukraine is about to enter an “in earnest” phase to achieve the “decisive victory” voted on by the Russian peoples, this report concludes, it saw Security Council Deputy Chairman Dmitry Medvedev declaring this morning: “The current ultimatums are a children’s warm-up ahead of Moscow’s future demands...And President Zelensky knows them...They include the total surrender of the Kiev regime on Russia’s terms”—and was a “total surrender” declaration quickly joined by Ukrainian President Vladimir Zelensky revealing: “Multiple regions of southeastern Ukraine suffered electricity shortages and blackouts caused by Russian missile attacks on critical infrastructure”.  [Note: Some words and/or phrases appearing in quotes in this report are English language approximations of Russian words/phrases having no exact counterpart.] 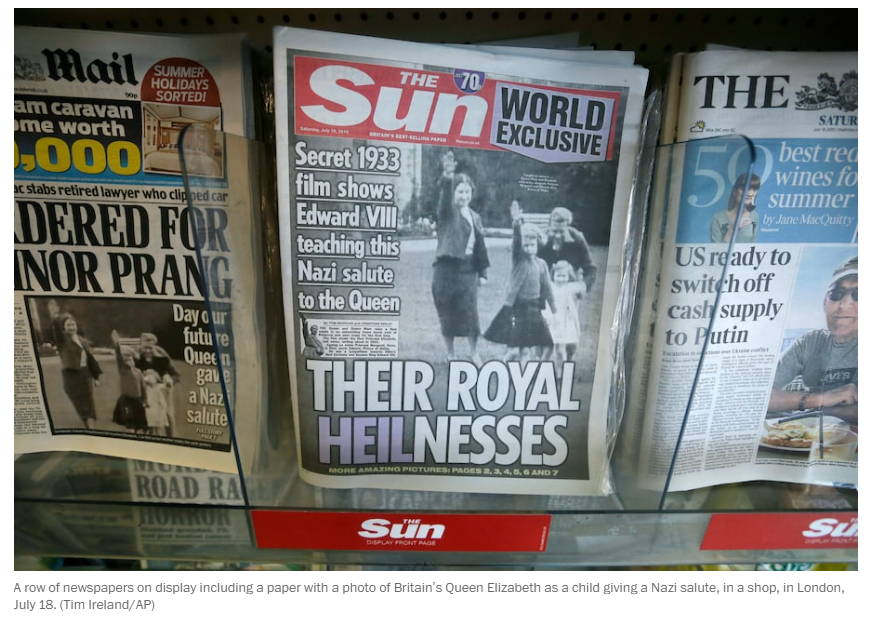 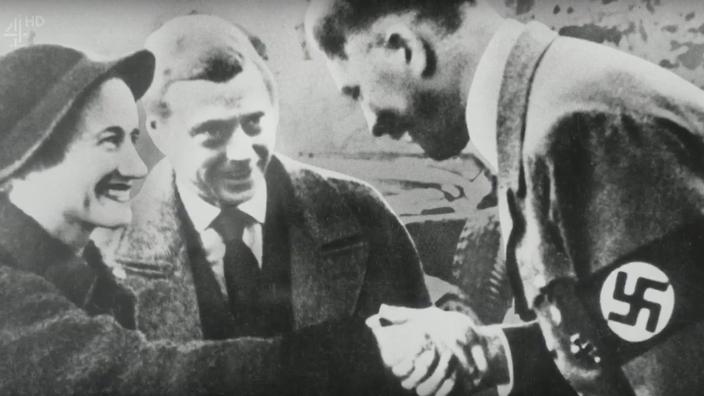 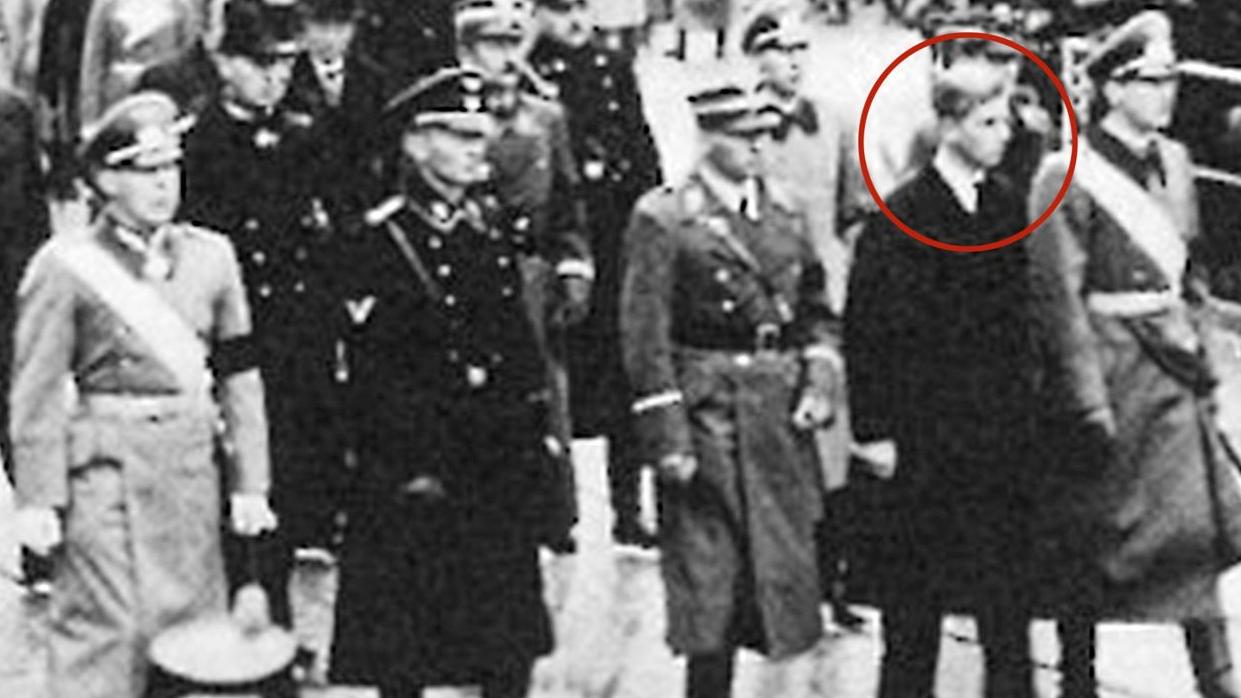 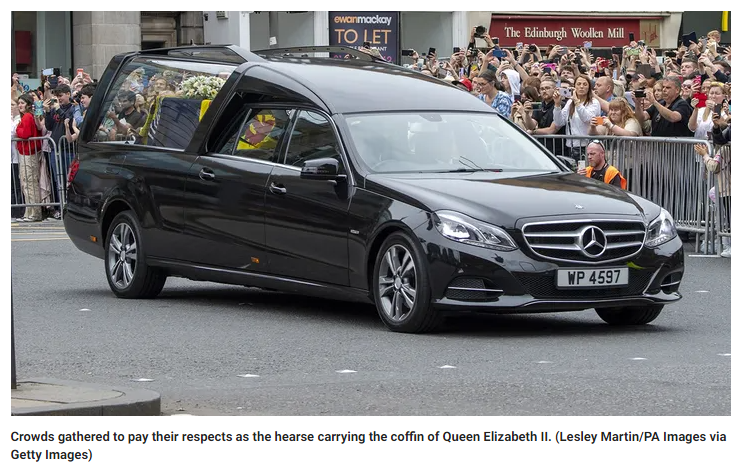 Body of Queen Elizabeth II paraded around in Mercedes Benz hearse (above) made for her by company that built vehicles for Nazi German leader Adolph Hitler. 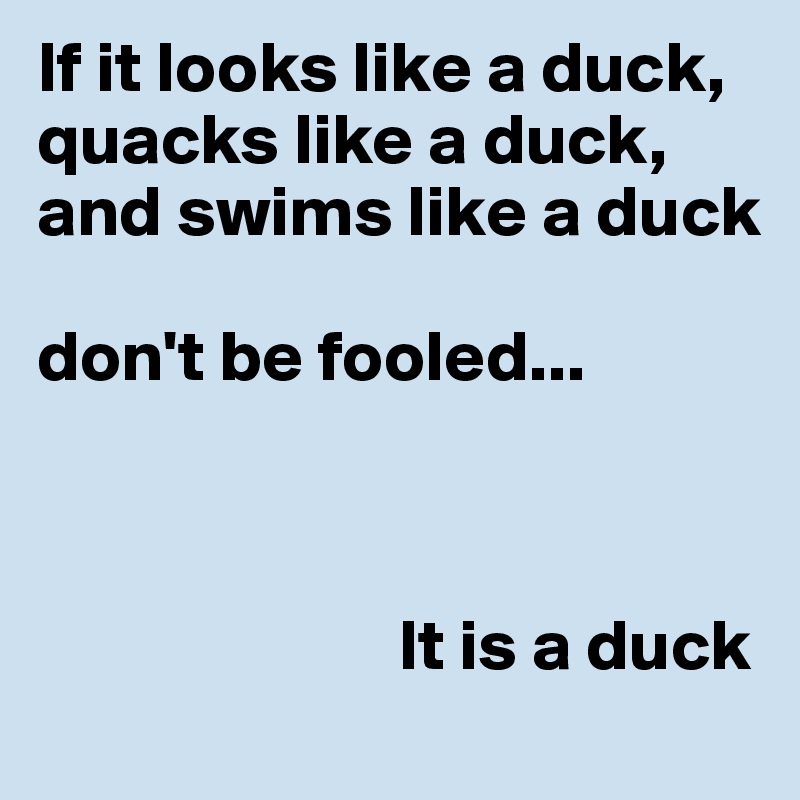 September 12, 2022 © EU and US all rights reserved. Permission to use this report in its entirety is granted under the condition it is linked to its original source at WhatDoesItMean.Com. Freebase content licensed under CC-BY and GFDL.