An intriguing new Security Council (SC) report circulating in the Kremlin today first noting President Putin will hold international telephone conversations on Saturday in preparation for the upcoming World Economic Foundation summit, says in further explaining the goals of the “Special De-Nazification Operation” to liberate Ukraine, he factually stated: “Everyone believes that some kind of aggression on the part of Russia is happening today...No one understands or knows that after the coup d’état in Ukraine in 2014, the people of Donetsk, Lugansk, Crimea – a significant part of them, in any case – did not want to recognize the outcome of this coup...New post-Maidan Ukrainian leaders began a war on their own citizens and have been waging it for eight years...And our goal, our mission, the mission of our soldiers, of the Donbass militias, is to end this war, to protect people and, of course, Russia itself”.

In the latest move to protect the socialist Obama-Biden Regime overthrow of the legitimately elected government of Ukraine in 2014, that the prestigious American intelligence think tank Stratfor called “the most blatant coup in the history of mankind”, this report notes, the socialist Western colonial finance ministers of the Group of Seven announced today their intention to ban maritime services transporting Russian oil if its price is not approved by “international partners”—is a doomed to fail lunatic socialist price fixing scheme that won’t hurt Russia in any way, and as so stated by Deputy Prime Minister Alexander Novak, who factually assessed: “Interference in the market mechanisms of such an important industry as the oil industry, which is the most important in terms of ensuring the energy security of the whole world, such attempts will only destabilize the oil market...If they impose restrictions on prices, we will simply not supply oil and petroleum products to such companies or states that impose restrictions as we will not work non-competitively...This will fully ruin the market...And those European and American consumers who are already paying high prices for energy now, will pay for the measure in the first place”.

Important to notice about the socialist Western colonial powers suiciding themselves by upending to global oil market, this report continues, is that it follows the botched raid on the Zaporozhye Nuclear Power Plant by Ukrainian commandos yesterday, who planned to use as “human shields” United Nations nuclear inspectors—a failed raid independent military analysts reveal was led by British military commanders, who along with the entire Ukrainian commando force estimated at over 300 were obliterated by the Russian military forces that were secretly awaiting them—after which top United Nations official Stephane Dujarric declared: “We are glad that the Russian Federation did what it needed to do to keep our inspectors safe”.

Along with Ukraine losing nearly all of its commando forces yesterday, this report details, Defense Minister Sergey Shoigu revealed that the Ukrainian military is suffering severe casualties in the south of the country, with him stating: “The counteroffensive planned by Ukrainian President Vladimir Zelensky’s office solely to create the illusion before the Western backers that the Ukrainian military is able to conduct an offensive has resulted in the enemy suffering considerable losses”—between 11 July and 1 September, it has seen Russian military forces obliterating 32,109 Ukrainian solidiers—today the Ministry of Defense (MoD) revealed: “Due to heavy losses, the personnel of the units of the 110th  mechanized brigade of the Armed Forces of Ukraine, who occupied positions in the areas of the settlements of Avdiivka and Opytnoe of the Donetsk People's Republic, refused to perform combat missions and left their positions”, and added that in August: “Russian military forces managed to destroy 174 command and control headquarters of the brigade and battalion units of the Armed Forces of Ukraine and more than 600 units of heavy weapons and artillery systems, mostly of Western production”—and in total, since the start of the special operation, Russian military forces have obliterated to following Ukrainian targets: “283 aircraft, 151 helicopters, 1,864 unmanned aerial vehicles, 372 anti-aircraft missile systems, 4,711 tanks and other armored combat vehicles, 823 combat vehicles of multiple launch rocket systems, 3,364 field artillery guns and mortars, and also 5,217 units of special military vehicles”.

In the latest intelligence assessment of what’s occurring between Ukrainian President Vladimir Zelensky and his military commanders suffering unending catastrophic battlefield losses, this report notes, Belarus President Alexander Lukashenko met with his top spy chiefs then revealed: “There is a conflict mounting between the president and military...Only military servicemen can say boldly: ‘We must reach an agreement otherwise Ukraine could be wiped off the face of the earth...They are getting slaughtered there...They see no prospects...Take a look at Ukraine’s west; the Poles are rubbing their hands, and are already carving up Ukraine’s land...The peak is expected very soon”—a revelation quickly joined by the stunning news that Ukrainian President Zelensky rented his multi-million-dollar mansion in Italy to an “enemy” Russian couple from London for $50,237---and yesterday it saw former top White House national security official Fiona Hill revealing: “According to multiple former senior US officials we spoke with, in April 2022, Russian and Ukrainian negotiators appeared to have tentatively agreed on the outlines of a negotiated interim settlement: Russia would withdraw to its position on February 23, when it controlled part of the Donbass region and all of Crimea, and in exchange, Ukraine would promise not to seek NATO membership and instead receive security guarantees from a number of countries”.

As the entire world knows, this report continues, the socialist Western colonial powers scuttled the peace agreement because they want to use Ukraine to harm Russia—to counter everyone opposing this socialist warmongering lunacy, yesterday it saw German Foreign Minister Annalena Baerbock proclaiming: “I give the promise to people in Ukraine...We stand with you, as long as you need us...No matter what my German voters think”—and is a socialist proclamation of warmongering lunacy that joins German Chancellor Olaf Scholz having himself proclaimed a “Zeitenwende” in Western colonial relations with Russia after the launching of the special operation to liberate Ukraine.

The proclamation of a “Zeitenwende”, which means “the turn of the eras” and “historic turning point” this report notes, was widely used by Nazi German leader Adolph Hitler to ignite the blood lust passions of his National Socialist German Workers' Party white master race followers against their enemies they branded as sub-human and enemies of the state—and were “Zeitenwende” proclamations Nazi leader Hitler always made against a backdrop of blood red lights and military forces standing behind him.

In what history will record as the most shameful and dangerous moment in modern American history, this report continues, last evening it saw Supreme Socialist Leader Joe Biden standing in the glow of blood red lights with soldiers behind him to proclaim a “Zeitenwende” against President Donald Trump and his tens-of-millions of supporters that comprise fully half of the population of the United States—was a “Zeitenwende” proclamation preceded by radical socialist White House spokeswoman Karine Jean-Pierre declaring: “When you are not with where the majority of Americans are, then, you know, that is extreme…That is an extreme way of thinking”—but according to this lunatic socialist logic, however, with the majority of 52.9% of American disapproving of Biden means his followers are the ones who are extremists.

In quick response to Socialist Leader Biden proclaiming a “Zeitenwende” against half the peoples of America, this report concludes, the just published Federalist article “Biden’s ‘Democracy’ Lecture Reminded Americans How Relentlessly Democrats Undermine It” factually notes: “In a prime-time speech explicitly designed to demonize half of the country and criminalize the conservative agenda ahead of the November midterms, President Joe Biden, positioned in front of a hellish background of red lights, accused former President Donald Trump and “MAGA Republicans” of being “a threat to the very soul of this country””—in a further response, America’s most watched newsman Tucker Carlson of Fox News exclaimed: “Yeah, 'they're a threat,' says the guy with the blood-red Nazi background and marines standing behind him…It's a complete outrage…This is truly nuts and threatening to the future of the United States”—in defense of the under socialist siege American people President Trump posted the message: “If you look at the words and meaning of the awkward and angry Biden speech tonight, he threatened America, including with the possible use of military force...He must be insane, or suffering from late-stage dementia!...Someone should explain to Joe Biden, slowly but passionately, that MAGA means, as powerfully as mere words can get, MAKE AMERICA GREAT AGAIN!”—more directly and accurately it saw top President Trump advisor Stephen Miller factually declaring: “President Biden tonight gave the speech of a dictator, in the style of a dictator, in the visual of a dictator, using the words of a dictator....This was his enemies of the state speech”—and most critical to notice about the “Zeitenwende” proclamation made by Socialist Leader Biden was it being ignored by all major TV networks in American that refused to air it, and was carried by just two cable channels, leftist fake news MSNBC and CNN.  [Note: Some words and/or phrases appearing in quotes in this report are English language approximations of Russian words/phrases having no exact counterpart.] 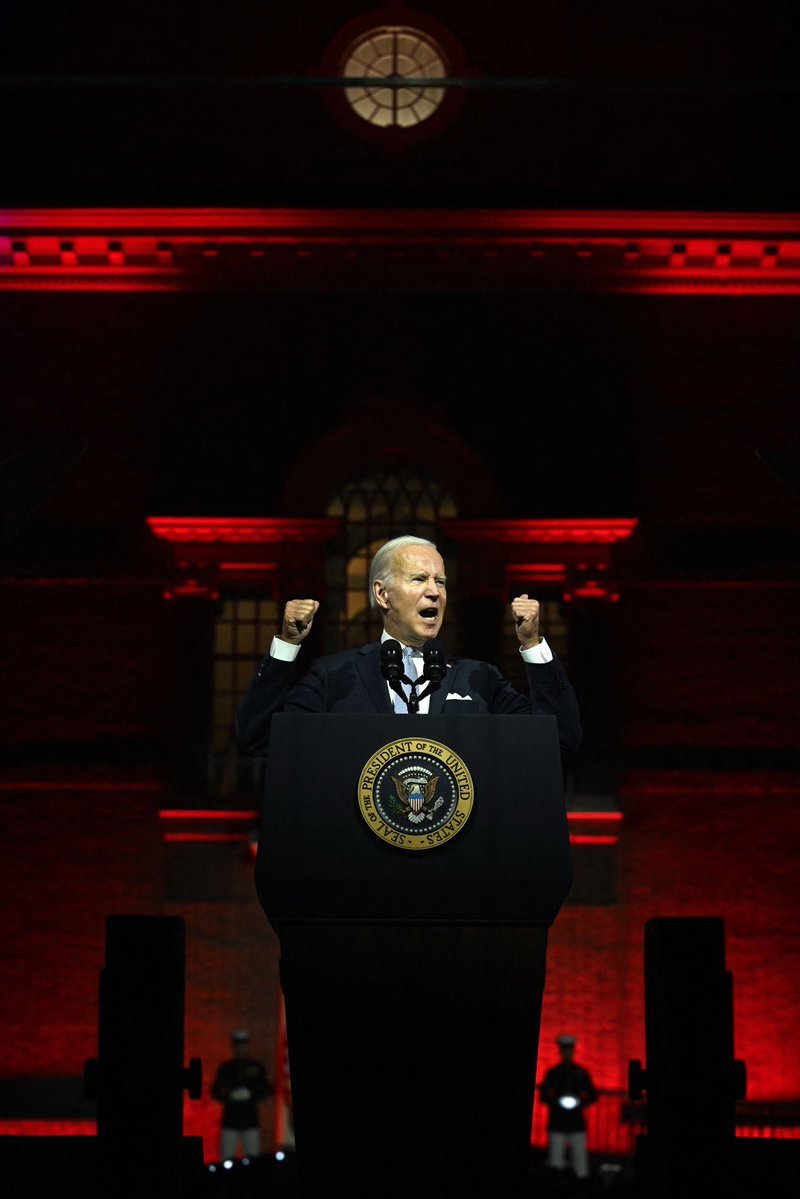 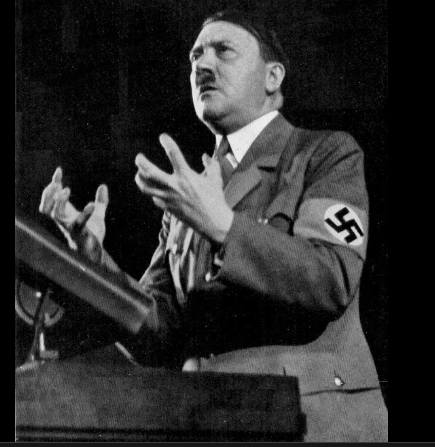 September 2, 2022 © EU and US all rights reserved. Permission to use this report in its entirety is granted under the condition it is linked to its original source at WhatDoesItMean.Com. Freebase content licensed under CC-BY and GFDL.