A thought-provoking new Security Council (SC) report circulating in the Kremlin today first noting President Putin having “grave concerns” over NATO warship activity in the Black Sea, says Deputy Foreign Minister Sergei Ryabkov is now warning: “What are American ships doing in the Black Sea, thousands of miles away from their bases?...Any explanations saying all that is for the sake of freedom of navigation simply do not work…They are playing with fire, it is just another attempt to test our resolve”—a “playing with fire” warning issued to Supreme Socialist Leader Joe Biden joined by Chinese Foreign Ministry spokesman Wang Wenbin likewise warning these American warmongers: “Colluding with Taiwan independence forces is a dangerous game and playing with fire will result in burning themselves”.

As the US Air Force steps up its presence near Russia’s southern borders, where four of its reconnaissance planes, including an American U-2, were seen there in the past 24-hour period, this report notes, yesterday it saw the Pentagon demanding the Kremlin explain leftist media reports about a Russian military buildup on the Ukraine border—a demand the Foreign Ministry previously addressed by calling these leftist stories “part of a fake news campaign against Russia”—are fake news stories about an imaginary Russian troop buildup the socialist Biden Regime used this morning to justify their signing of a “Strategic Partnership Agreement” with Ukraine, that Ambassador Anatoly Antonov best described as merely “a set of slogans…harmful ones…in almost every line there is a geopolitical tool to oppose Russia”—and in commenting on this so-called agreement to test Russia’s military forces, it saw Ambassador Antonov stating: “We are concerned that today’s meeting in Washington has taken place against the background of a sharp escalation in the Black sea region…NATO’s naval and air forces are testing our army and fleet…This is a waste of time and effort”.

At the same time socialist leader Biden is dangerously probing Russian military strength on the southern border and Black Sea, this report details, the European Union has just abruptly changed its refugee open border policies to support Poland to keep them out of their territory—the same European Union that in the past levied massive fines against Poland for refusing to open its borders to refugees—an abrupt change based on these refugees using Belarus as their choice of transit to reach the European Union nation of Poland—the hypocrisy of which caused Kremlin spokesman Dmitry Peskov to slam the European Union for abandoning their “supreme humanitarian ideals”, with his stating: “The situation is indeed highly tense, a trend is observed of increasing tension which can only concern us…A looming humanitarian catastrophe is evident against the background of the unwillingness of our European colleagues to demonstrate the adherence to their European values”—and today sees Belarus President Alexander Lukashenko warning he will cut off all natural gas pipelines to the European Union, with his stating: “We furnish Europe with heat, yet they threaten to close the border...And what if we shut off natural gas there?...What if we close the transit through Belarus?...Through Ukraine it won’t work: the Russian border is closed there, there are no roads through the Baltic states...If we close it for the Poles and, for example, for the Germans, what will happen next?...We should stop at nothing to protect our sovereignty and independence...Therefore, I would recommend that the Polish leadership, the Lithuanians and other empty-headed individuals think before they speak”.

With the “Winds of War” blowing over Europe once again, this report continues, Security Council Secretary Nikolai Patrushev held a meeting with this morning with Secretary of the Supreme National Security Council of Iran Ali Shamkhani—one of whose main topics of discussion was Saudi Arabia rapidly turning away from the United States towards China—an historic pivot of Middle East energy giant nations away from America spurred by the socialist Biden Regime proclaiming last week that they intend to bankrupt the fossil fuel industry on the alter of their new climate change religion—sees another topic of discussion being the diplomatic crisis between Morocco and Algeria that now threatens the gas supply to Europe through Spain—and sees both Russia and Iran agreeing with the just released assessment that the price of oil will reach $200-per-barrel by the end of 2022.

While plunging his nation towards a war it has no chance of winning and the American people aren’t even aware of, this report notes, yesterday it saw socialist leader Biden most accurately blaming his country’s mood on the policies created by his own regime—like the demented idiot he truly is then saw Biden exclaiming with marvel: “Did you ever think you’d be paying this much for a gallon of gas?...In some parts of California, they’re paying $4.50 a gallon”—in quick “Clean up in aisle 7!” response to Biden blurting out the truth it saw White House chief of staff Ron Klain frantically screaming to the leftist media: “I understand that voters are frustrated…We inherited a mess from Donald Trump”—though in factual reality, the “mess” President Trump left to America was a secure southern border, low trade deficits, energy independence, record low gas prices, full employment, record high wage gains and low inflation—but in just the past 10-months since Biden and his socialist forces seized power, in September it saw the US trade deficit hitting an all-time high of $80-billion, sees gasoline prices having risen by 6.1%, and consumer prices surging to the highest level seen in 31-years, sees inflation having hit a 31-year-high in October, the grim consequence of which is summed up by noting: “Inflation has taken away all the wage gains for American workers and then some”.

Still not being understood by the greater masses of the American people, this report further notes, is that what’s being imposed on them by brutal force is “The Great Reset”, which is the deranged socialist-globalist utopian vision of how the world should be run and ruled—that this week these demonic socialist-globalist elites joined with “The Great Narrative” master plan to “fashion longer-term perspectives and co-create a narrative that can help guide the creation of a more resilient, inclusive and sustainable vision for our collective future”—though in reality it is nothing more than socialist propaganda and indoctrination, whose latest “narratives” include “President Trump and his Republican Party Death Cult are a threat to the nation” and “The United States is nothing more than ground soaked in blood and theft”.

In truth, however, this report continues, the blood soaked into America largely came from its teenage citizen-soldiers, who froze to death at Valley Forge to free their nation from the tyranny of the British Empire, died by the hundreds-of-thousands on battlefields during the Civil War to free black slaves, died by tens-of-thousands in battles to keep the world free from tyranny in World War I and World War II, and died by the tens-of-thousands on battlefields in places like Vietnam, Iraq and Afghanistan for reasons never fully explained to them, but they fought with honor anyway.

Though not known to most Americans, this report concludes, every able-bodied man of at least 17 and under 45 years of age is a member of the unorganized United States Militia—one of whom, in August-2020, was 17-year-old Kyle Rittenhouse, who split his time living with his mother in Illinois and his father in Wisconsin—and when his father’s home city of Kenosha-Wisconsin was set upon by mobs of socialist terrorists last summer, it saw Rittenhouse becoming an armed citizen-soldier defending the property of people their police forces had abandoned—while defending his fellow citizens saw Rittenhouse having no choice but to shoot and kill two socialist terrorists attempting to kill him, and wounding another one trying to shoot him in the head—saw the first socialist terrorist Rittenhouse shot and killed being convicted child rapist Joseph Rosenbaum, whose death Fox News host Tucker Carlson described as: “A rapist called Joseph Rosenbaum died as he had lived, trying to touch an unwilling minor”—saw the other two socialist terrorists Rittenhouse shot also being convicted criminals, and the one who survived had all charges against him dropped for illegally possessing the gun he tried to kill Rittenhouse with—yesterday saw this young boy Rittenhouse breaking down in tears during his testimony when having to recall the moments he had to take a human life—then saw elite socialist sports star LeBron James mocking Rittenhouse with the vile Tweet: “What tears?????...I didn’t see one…Man knock it off!...That boy ate some lemon heads before walking into court”—beyond all belief then saw top socialist Democrat Party leader US House Black Caucus Chairman Hakeem Jeffries posting the demonic message: “Lock up Kyle Rittenhouse and throw away the key”—a condemnation of Rittenhouse made by one of the top socialist Democrat Party leaders in America while the show trial for this young boy’s life is still ongoing—a trial overseen by a judge who’s had to repeatedly unleash his wrath on socialist prosecutors for violating his orders and the constitution—today sees the leftist media exploding in rage because this judge’s phone ringtone is “God Bless The USA”—today also sees former moderate Democrat Party presidential candidate Tulsi Gabbard most correctly saying that this tragedy would have never happened if the police had protected people like they’re supposed to—though most astonishing to notice about this trial is its having made a new hero now cheered the world over as “Grambo”, whose dynamite testimony by this elderly woman exploded the narrative of this event the socialists and their lying leftist media lapdogs had deceitfully crafted.  [Note: Some words and/or phrases appearing in quotes in this report are English language approximations of Russian words/phrases having no exact counterpart.] 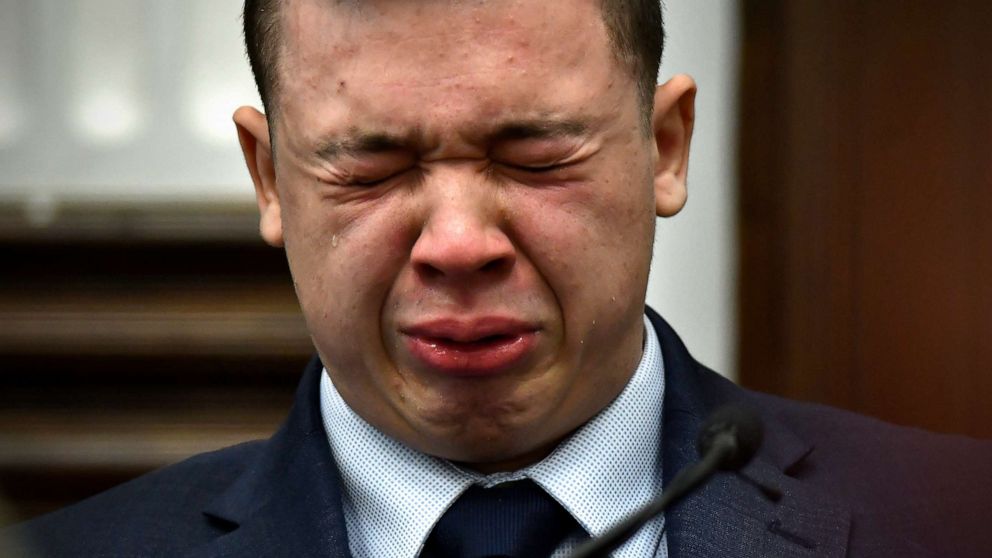 November 11, 2021 © EU and US all rights reserved. Permission to use this report in its entirety is granted under the condition it is linked to its original source at WhatDoesItMean.Com. Freebase content licensed under CC-BY and GFDL.