A foreboding new Security Council (SC) report circulating in the Kremlin today first noting that during his clandestine visit to Moscow last week to meet with top Russian intelligence officials, CIA Director William Burns talked directly by phone with President Putin, says immediately following this exchange, President Putin and Belarusian President Alexander Lukashenko signed a decree ratifying the program of the Union State of Russia-Belarus, and also approved the “Military Doctrine of the Union State”, after which President Putin proclaimed: “We intend to jointly resist any attempts to interfere in the internal affairs of our sovereign states, and Russia, of course, will continue to provide assistance to the fraternal Belarusian people – there is no doubt about it”.

Security Council Members in this transcript discussing the new military alliance between the Russian Federation and Belarus, note that upon its approval Minister of Defense Sergey Shoigu issued a grave warning that American warships armed with powerful missiles were sailing into the Black Sea to test whether Russia is ready to counter them, and said this war provocation: “Is an almost constant attempt to probe us, to check our readiness, how well our defense is organized along the Black Sea coast and the entire south of our nation”—a warning quickly followed by the Ministry of Defense (MoD) issuing an urgent bulletin regarding the Admiral Essen frigate stating: “According to the scenario for the exercises, the Black Sea Fleet’s control centre received information about the takeoff of a group of ‘enemy’ aircraft in the direction of the Crimean Peninsula…During the drills, the frigate’s air defence crew acquired the targets and destroyed them using anti-aircraft missiles”.

At the same time these American warships were sailing into the Black Sea to probe Russian defenses, this report notes, thousands of war refugees fleeing from the Middle Eastern nations the United States and its European allies have been destroying for the past 20-years suddenly began arriving in Belarus—and in response to saw Belarus Interior Minister Ivan Kubrakov factually stating: “These migrants have not violated the law so far...They are on the territory of the Republic of Belarus legally...Indeed, their number has increased...However, they come to our country with visas and check into hotels...These people are fleeing war and are trying to get into the EU...As a hospitable country, we are always ready to welcome everyone...I would like to note that there are no problems with migrants in Belarus today...We regularly hold preventive consultations with them, and they respond well”.

With both Belarus and Mexico following the exact same policies of allowing refugees to freely chose what their final destination will be, however, this report continues, NATO-member Poland is claiming that “a hybrid attack against Poland has just begun” because of the refuges trying to enter their country from Belarus—today sees Polish Deputy Foreign Minister Pawel Jablonski saying his nation may turn to NATO for help, with him stating: “In the case of necessity, if the situation continues to escalate, we do not exclude using such help”—in response to sees NATO calling this refugee crisis “unacceptable” and accusing Belarus President Lukashenko of “using” these refuges as a “hybrid tactic”—accusations the Belarus State Border Committee countered in a statement that the migrants are “exercising their right to apply for refugee status in the European Union”, and stated: “All of these people, including women and children, do not pose a security threat and do not behave aggressively”.

After German caretaker Interior Minister Horst Seehofer declared this morning: “We must help the Polish government secure their external border…This would actually be the task of the European Commission. I’m now appealing to them to take action”, this transcript sees Security Council Members noting that no similar declaration or appeal has been made by Germany to “secure the external border” of the United States from its refugee crisis, which is magnitudes larger than what’s being seen in Europe—and in calling out this blatant Western hypocrisy, it saw Belarus President Lukashenko stating: “They demand that we protect them from smuggling and drugs…I just want to ask, are you mad?...You have unleashed a hybrid war against us and now you demand that we protect you as we did before”.

Fast growing from a “hybrid war” to a “hot war”, this report notes, NATO-member Poland has deployed 12,000 troops on its border with Belarus, where today they are using tear gas against refugees and reports of shots being fired are emerging—a situation fast tilting towards war that caused NATO-member Lithuania to declares a “state of emergency”—that was quickly followed by the US State Department declaring: “As long as the regime and Belarus refuses to respect its international obligations and commitments, undermines the peace and security of Europe and continues to repress and abuse people seeking nothing more than to live in freedom, we will continue to pressure Lukashenko and will not lessen our calls for accountability”—all of which has now been joined by Supreme Socialist Leader Joe Biden ordering the deployment to Europe of long-range nuclear missiles for the first time in 30-years since the Cold War ended.

In further war provocations to destabilize Europe in order to ignite a war with Russia, this transcript sees Security Council Members noting that imprisoned former Georgian President Mikhail Saakashvili is now in hospital as his condition worsens—saw Biden and his socialist regime sending Saakashvili back to Georgia to ignite a rebellion, and whose supporters are rallying in the streets today—this past week saw the American leftist propaganda media establishment publishing hundreds of articles like “Satellite Images Show New Russian Military Buildup Near Ukraine”, but whose real truth about is that these satellite images purporting to show Russian forces building up on the border with Ukraine are actually showing Russian armored units in the Smolensk region, about 250 km north of Ukraine, and 800 km from the conflict zone in Ukraine’s east—which is why Ukrainian President Volodymyr Zelensky responded to these lies saying there is no Russian military buildup on his border, and saw his government stating: “It remains an open question, why the US media spreads such information and whether it is true...We have no information to confirm it”.

With Poland grimly warning today of a potential “armed escalation” at its border with Belarus, and exactly stating: “We expect that there may be an escalation of this type of action on the Polish border in the near future, which will be of an armed nature”, the conclusion section of this transcript sees Security Council Members doubting that the American people are even aware of the “Military Doctrine of the Union State” now in full force between the Russian Federation and Belarus—a military doctrine that will see Russia coming to the immediate defense of Belarus if Poland attacks—in turn will see American troops coming to the defense of their NATO ally Poland—and if happens, will see American soldiers dying to keep refugees out of the European Union at the exact same time refuges by the thousands are headed to the United States with no one to stop them.  [Note: Some words and/or phrases appearing in quotes in this report are English language approximations of Russian words/phrases having no exact counterpart.] 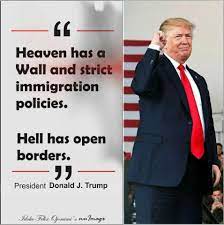 November 9, 2021 © EU and US all rights reserved. Permission to use this report in its entirety is granted under the condition it is linked to its original source at WhatDoesItMean.Com. Freebase content licensed under CC-BY and GFDL.