A chilling new Security Council (SC) report circulating in the Kremlin today first noting that speculation on European markets has driven natural gas prices higher as the “Russia’s to blame” game continues, says in response to the baseless claim that Russia has anything whatsoever to do with this crisis the West has inflicted on itself with its insane green energy policies, President Putin factually stated: “The first pipe of Nord Stream 2 has been already filled with gas…If tomorrow the German regulator gives permission for the supply, then the next day the deliveries will start, 17.5 billion cubic meters...Considering that the gas shortage on the European market, according to our calculations, will amount to 70 billion cubic meters, 55 billion cubic meters is a good volume”.

With the United States having placed repeated sanctions on the Nord Stream 2 pipeline in a still failing bid to keep Russian natural gas from reaching the energy starved European Union, this notes, it bears noticing that the Americans have just been slammed by oil hitting multi-year highs on tight global supply—in response to soaring natural gas and oil prices crushing Americans as winter draws nearer, this past week it saw Supreme Socialist Leader Joe Biden dementedly pledging that “America is back”, that was quickly joined by global defense experts asking: “As peace shatters in the Balkans, does that mean yet more US overseas misadventures?”—a question followed by American war ally Ukraine proclaiming that its missiles aimed at Moscow will be “the end of the Russian army and the end of the Russian Federation”—a threat of war now joined by the United States placing Russia on its “homeless nationalities” list of nations it has no relations with, which means Russian citizens wanting US visas have to travel to Poland to get them—and in response to, saw Foreign Ministry spokeswoman Maria Zakharova stating: “Something important broke down in the US State Department long ago, and they cannot repair it”.

Security Council Members in this transcript discussing the issue of the ability of the United States to wage total war against Russia, note President Donald Trump sham impeachment instigator Fiona Hill warning earlier this month: “The United States is teetering on the edge of violence here…We're already, I think, in a cold civil war”—a warning Hill joined this past week with her declaration: “Open civil war is possible if Trump is elected in 2024 because Democrats will see his win as illegitimate”.

Since Biden and his socialist Democrat Party forces seized power in January, this report details, they, along with their lapdog allies in the leftist mainstream propaganda media establishment, have churned out a continuous stream of civil war alarmism—though in reality, no firm evidence exists that the American people, or any of its individual States, are preparing for such a conflict.

In attempting to understand this civil war alarmism, this transcript sees Security Council Members noting that Biden and his socialist forces have fixated themselves upon one of the main outcomes of the American Civil War, which was the National Currency Act of 1863, subsequently amended by the National Bank Act, which created the Office of the Comptroller of the Currency (OCC)—and unknown to the greater masses of Americans, today sees the OCC having complete control over every bank in the United States and all of their bank accounts.

With Biden and his socialist Democrats controlling the US Congress, this transcript sees Security Council Members noting its critical importance due to what are known as “recess appointments” which are appointments to high government office made by the president when the US Senate is in recess, and keeps nominees from having to undergo the US Senate confirmation process—which is why critical notice is always taken of persons whose nominations are made at the start of October, whose confirmation process dead ends when the US Senate takes its yearly Thanksgiving-Christmas Holiday recess.

On 3 October, this report continues, one of the most alarming articles in modern American history was published entitled “October Surprise: Red October”, wherein it fearfully stated: “Surely someone in the Biden regime is trolling us all; nominating an unreformed communist as Comptroller of the Currency…Yet, this is neither an Onion nor a Babylon Bee story…Rather the Wall Street Journal editorial board cleared its collective throat to protest profusely…Still, trust but verify—too easy, the public record is clear and chilling…What is the Comptroller of the Currency, who is Saule Omarova, and why should you care?...In short: a key position controlling our banking system, an immigrant from the former Soviet Union who believes the USSR centrally planned and controlled economy was better, fairer, more “democratic,” than the American economy, and the Democrats want to seize your checking and savings account”.

Saule Omarova, whom socialist leader Biden nominated to head the OCC, this report details, was born and raised in the former Soviet Union, was a loyal member of the Communist Party mass youth movement “Young Pioneers” and educated in higher learning at Moscow State University, where she produced her thesis “Karl Marx's Economic Analysis and the Theory of Revolution in The Capital”—in 1991, she traveled to the United States on a student visa, but after the Soviet Union collapsed chose to stay there—and as late as 2019, she was a member of a Marxist Facebook group that says about itself: “This Marxist group is a platform for analysis, policy and polemics from the perspectives of a diverse range of Socialist and anti-capitalist views…We are against exploitation, inequality, racial discrimination and ecological destruction at the core of Capitalist social relations…The working class has the potential and the ability to change Capitalism and in the process change itself…Only working people, by their own efforts, can free themselves from Capitalism…We stand for the self emancipation of the working class and Socialism”.

In the in the documentary “Assholes: A Theory”, this report notes, it saw Omarova calling Wall Street hedge funds “a quintessential asshole industry”—in her 2009 white paper “The Quiet Metamorphosis: How Derivatives Changed the ‘Business of Banking’” it sees Omarova advocating using the National Back Act as means to allow the OCC to take over all of the banks in America—and today sees Omarova saying she wants to move most of the consumer banking industry out of private institutions and into the hands of the Federal Reserve.

Four months after socialist leader Biden seized power, this report continues, the Federal Reserve, on 20 May, published a foreboding notice stating: “Central bank money traditionally takes two forms: cash and reserves held by eligible financial institutions at the central bank…Central bank digital currency (CBDC) is a generic term for a third version of currency that could use an electronic record or digital token to represent the digital form of a nation's currency…CBDC is issued and managed directly by the central bank and could be used for a variety of purposes by individuals, businesses, and financial institutions…To date, no decision has been made on whether to issue a CBDC in the U.S. payment system…However, given the dollar's important role globally, it is essential that the Federal Reserve remains fully engaged in CBDC research and policy development”—the beyond shocking implications of which Omarova details in her constantly revised (last revision 15 October) document article “The People’s Ledger: How to Democratize Money and Finance the Economy”, wherein she lays out the socialist master plan to seize the bank accounts of all Americans and replace their dollars with digital currency controlled by the Federal Reserve, and in whose description of this master plan exactly states:

It pushed two related ideas—the issuance of central bank digital currency and the provision of retail deposit accounts by central banks—to the forefront of the public policy debate.

This Article takes up that challenge.

It offers a blueprint for a comprehensive restructuring of the central bank balance sheet as the basis for redesigning the core architecture of modern finance.

Focusing on the U.S. Federal Reserve System, the Article outlines a series of structural reforms that would radically redefine the role of a central bank as the ultimate public platform for generating, modulating, and allocating financial resources in a democratic economy—the People’s Ledger.

Security Council Members in the conclusion section of this transcript note that Omarova has reverted to her socialist training by crying “I am an easy target: an immigrant, a woman, a minority” in the face of the severe Republican Party opposition she faces in the US Senate—a tactic socialists always use to portray anyone opposing them as racist—in factual reality it should see Omarova heeding the words of the late Democrat Party lawmaker US Senator Daniel Inouye, who famously warned: “There exists a shadowy government with its own Air Force, its own Navy, its own fundraising mechanism, and the ability to pursue its own ideas of the national interest, free from all checks and balances, and free from the law itself”—and if Biden and his lunatic socialist Democrats really want a civil war, their seizing the bank accounts of Americans will, most assuredly, give them exactly what they keep warning about.  [Note: Some words and/or phrases appearing in quotes in this report are English language approximations of Russian words/phrases having no exact counterpart.] 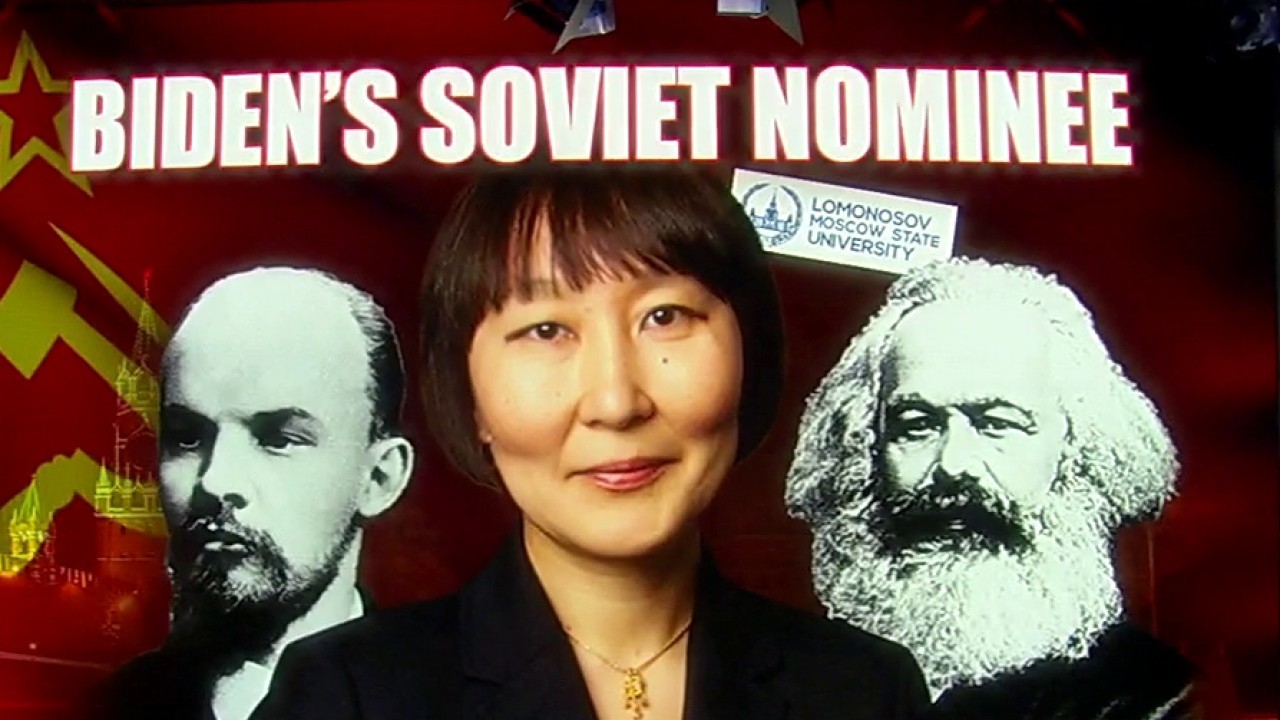 October 25, 2021 © EU and US all rights reserved. Permission to use this report in its entirety is granted under the condition it is linked to its original source at WhatDoesItMean.Com. Freebase content licensed under CC-BY and GFDL.