An alarming new Security Council (SC) report circulating in the Kremlin today first noting yesterday’s leftist New York Times article “Biden Warns Putin to Act Against Ransomware Groups, or U.S. Will Strike Back” lying to claim that Supreme Socialist Leader Joe Biden “warned President Vladimir V. Putin of Russia on Friday that time was running out for him to rein in the ransomware groups striking the United States, telegraphing that this could be Mr. Putin’s final chance to take action on Russia’s harboring of cybercriminals before the United States moved to dismantle the threat”, says in factual reality this phone call didn’t contain any such “warning” from Biden to President Putin—but wherein President Putin did assure Biden that Russia is ready to tackle criminal activities in cyberspace together with the United States, though he added that it is Washington which has not contacted the relevant Russian agencies on any such cases over the past months.

This report notes that these leftist American propaganda hit piece articles about Russia are common these days, such as the one last week done by the radical leftist mouthpiece Daily Beast entitled “Anti-Vaxxers Could Kill the Summer at Russia's Most Famous Resort Town”, wherein it depicted Russia's top coastal city Sochi as “grim and empty”—all of whose pictures were taken during a day when rain storms pounded Sochi—but the day following, saw Sochi and its sunny beaches full of happy tourists like it has been for decades.

In response to this blatant American propaganda, the Foreign Ministry released a damning dossier accusing the United States of violating human rights both at home and abroad—which specially says about Biden and his socialist forces: “Systemic violations of fundamental human rights and freedoms are still going on, and the authorities have a persistent unwillingness, bordering on inability, to bring the situation under control”.

Security Council Members in this transcript discussing the human rights being violated in the United States, agree that the most fearsome of them is Biden and his socialist forces having unleashed on America a reign of deadly terror—a reign of deadly socialist terror first documented by award winning American investigative journalist Mike Cernovich, who in his searing 2013 article “How a Convicted Terrorist used the Southern Poverty Law Center’s Website to Identify Targets” conclusively documented and proved how the Obama-Biden regime was pouring money into socialist organizations like the Southern Poverty Law Center for the purpose of inciting racial hatred and to provide socialist terrorists with targets to be eliminated.

With it being reported yesterday that leftist big tech giant Google is now censoring Cernovich’s damning article, this transcript sees Security Council Members noting this censorship is part of the diabolical George Floyd cover-up—a cover-up involving a black “career criminal” drug addict named George Floyd who died with a “fatal level” of fentanyl in his system, but whose cause célèbre death (a controversial issue that attracts a great deal of public attention) while being arrested was exploited by socialist forces and the leftist media to incite racial hatred and ignite socialist terror throughout all of America.

As to why these godless socialist forces desperately needed the George Floyd cause célèbre, this transcript sees Security Council Members agreeing it was because his tragic death quickly followed one of the most horrific racial crimes to have ever been committed in the United States that occurred a few days earlier in May-2020, and news about needed to be urgently suppressed—which was when a 29-year-old black radical terrorist named Sheldon C. Francis summarily executed with gunshots to the head 86-year-old white World War II veteran Paul Marino and his 85-year-old wife Lidia Marino while they were visiting the grave of their son in a Delaware cemetery—deadly black socialist terror attacks upon whites that have continued without the American people being allowed to know about them—and during the past month alone, saw 39-year-old black socialist terrorist Justin Tyran Roberts hunting for and gunning down 5 young white men in Alabama and Georgia—saw a black socialist terrorist mob in Chicago dragging white Hispanics 24-year-old Gyovanny Arzuaga and his 23-year-old fiancée Yasmin Perez from their car in broad daylight and executing them both with bullets to the head—and this week saw 23-year-old black socialist terrorist Bryan Rhoden binding up with tape 76-year-old white senior citizen Paul Pierson and 46-year-old white Hispanic Henry Valdez then executing them with bullets to the head, after which he drove onto a golf course in Georgia and executed famed 46-year-old white golf instructor Gene Siller.

Security Council Members in this transcript grimly note that the American people have no idea what underlies these deadly targeted socialist attacks on whites by black terrorists—the same of which can’t be said about the Russian people, who lived for nearly 100-years under despotic socialist rule—100-years of socialist-communism that resulted in 100-million deaths—and is why Russian school children are extensively taught about godless socialism and their deadly demonic tactics to gain power, so in the future their flames of hatred can be spotted and quickly extinguished.

One of the most deadly tactics employed by socialist forces, this report explains, is the one known as a “diversionary tactic”—a socialist tactic intended to attract people's attention away from something they do not want anyone to think about, know about, or deal with—one of whose best current examples of is on display today in Canada—and is where, after the world began to take notice of the large number Christian pastors being arrested and jailed for violating pandemic restrictions, the radical socialist Canadian government suddenly began “discovering” the graves of hundreds of indigenous children buried in the cemeteries of Christian church schools where they were placed—Christian church schools Canada’s indigenous children were placed in under government edict for nearly two centuries—during which time Canada was struck with repeated pandemics of non-curable diseases such as Typhus, Smallpox. Cholera and Influenza—were pandemic diseases that filled every cemetery in Canada with the bodies of children—one of the most notable being the 1918-1920 Spanish Flu pandemic in Canada that killed 55,000, most of whom were children and young adults.

Near immediately after powerful Republican Party lawmaker United States Senator Josh Hawley urged the US Commission on International Religious Freedom to consider placing Canada on its Watch List due to its continued lockdown restrictions, arrests of Christian pastors and seizure of church property, this report continues, the socialist Canadian government began “discovering” the bodies of indigenous children in Christian school cemeteries—none of whose dates of burial and actual causes of deaths were reported—which was deliberate, as a socialist “diversionary tactic” is designed to deflect from what’s real to what’s being made up in the most chaotic and destructive form possible—and was accomplished because at least 20 Christian churches in Canada have been burnt to the ground and vandalized—sees a top socialist Canadian government official saying that burning down Christian churches is “understandable”—which is expected because Christians have always been the sworn enemies of socialists.

Most dangerous for the American people, most particularly its white Christian population, this report concludes, is them failing to notice that socialist terrorists defaced the prominent Christ of the Ozarks statue near Eureka Springs--Arkansas, on Thursday night with a 44-foot banner that said “God Bless Abortions”—an attack that was joined by a socialist terrorist climbing atop the Los Angeles Church Bell Tower to set its Cross on fire—attacks on Christianity that quickly followed socialist leader Biden’s radical Interior Secretary Deb Haaland declaring: “The public needs more answers on the children lost to Native American boarding schools”—all of which shows that the socialist “diversionary tactic” unleashed by Canada against Christian Churches is being unleashed in America—which explains why radical Marxist Black Lives Matter co-founder Patrisse Cullors just paid $35,000 to build an electric fence with armored gate around her $1.4-million property—and more than explains why a radical socialist homosexual organization in San Francisco just released their victory song that demonically proclaims:

You think that we’ll corrupt your kids, if our agenda goes unchecked.

Funny, just this once, you’re correct.

We’ll convert your children.  Happens bit by bit.  Quietly and subtly.  And you will barely notice it.

The gay agenda is coming home.

The gay agenda is here!

We’re coming for your children! 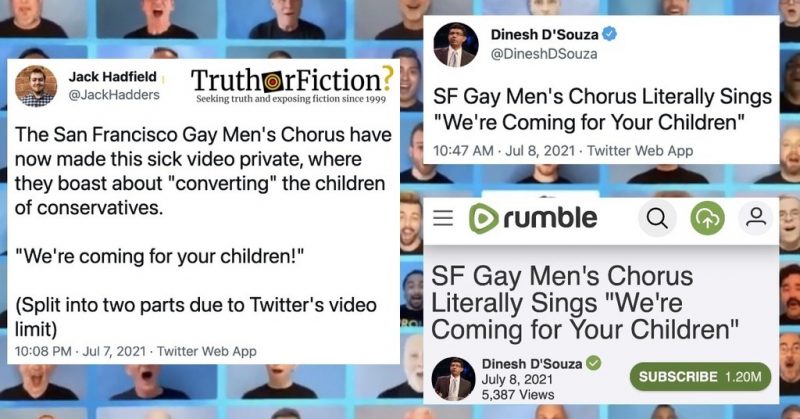 July 10, 2021 © EU and US all rights reserved. Permission to use this report in its entirety is granted under the condition it is linked to its original source at WhatDoesItMean.Com. Freebase content licensed under CC-BY and GFDL.