A compelling new Security Council (SC) report circulating in the Kremlin today first noting the Ministry of Defense (MoD) stating to the Pentagon and British Royal Navy: “We call on the Pentagon and the command of the British naval forces, who send their warships to the Black Sea, not to push their luck pandering to the Ukrainian ‘mosquito fleet admirals’ but to be guided by reason instead”, says adding to this good advice was Russian Ambassador to the United Kingdom Andrei Kelin issuing a final warning that states: “In case of further escalation, in case of recurrence of such provocation near Crimea’s coasts, I don’t rule out that we will have to respond quite toughly and escalation of relations will only continue...It is difficult today to influence the Russian-British relations as they have been driven into a dead end and are nearly at a point of freezing”.

Causing this final warning to be issued was the 23 June war provocation in the Black Sea that saw Russian military forces having to fire upon and drop bombs in the path of a NATO-British warship after it refused to heed warnings to leave Russian Federation territorial waters—a war provocation followed by Director Sergei Naryshkin of the Foreign Intelligence Service (SVR) warning Security Council Members that the Western countries causing this grave escalation were “almost all showing signs of being totalitarian dictatorships ruled over oligarchic elites turning their nations into police states”—after which Chief of Staff General Valery Gerasimov issued an unmistakable warning stating: “Russia reserves the right to use nuclear weapons in response to the use of nuclear and other types of weapons of mass destruction against it or its allies, and in cases of aggression against Russia using conventional weapons when the very existence of the state is threatened”.

In his warning Director Naryshkin further stated that these Western totalitarian dictatorships have created a “monopoly on their media” to censor true facts from being known by their citizens—which explains why London officially declared that “no warning shots have been fired at HMS Defender”—a deliberate lie to the British people Russia quickly countered by releasing videos of what exactly happened—that was joined by Moscow warning that the next time this happened the bombs could be dropped on warships, not in their paths—then saw it being revealed that British Prime Minister Boris Johnson personally ordered this warship into Russian waters, ignoring warnings of his foreign secretary—a shocking revelation Foreign Ministry spokeswoman Maria Zakharova quickly responded to by stating: “It is certain that the actions of the British destroyer that sailed into the Russian territorial waters could not have been greenlighted without the US approval”.

In attempting to ascertain what Supreme Socialist Leader Joe Biden and his NATO forces are trying to achieve with their war provocations, Foreign Minister Sergei Lavrov is now grimly reporting: “NATO does not want to communicate at all through the military…Our constructive, concrete proposals aimed at reducing military danger along the line of contact between Russia and NATO have been on the table for almost two years, but there has been no answer”—after which Kremlin spokesman Dmitry Peskov stated the truest fact about this looming war by reminding the world: “It is not us, who fly personnel to other continents…It is the personnel from other continents that are airlifted to our borders”.

While Russia readies its world’s largest arsenal of nuclear weapons in preparation for war, the assessment made by Federation Council Chairwoman Valentina Matviyenko earlier this week that “America has gone bat shit crazy” was more than proven true when socialist leader Biden went to the White House podium on Wednesday to directly threaten his own citizens by insanely declaring: “The 2nd Amendment from the day it was passed limited the type of people who could own a gun, and what type of weapon you could own…You couldn't buy a cannon…If you think you need weapons to take on the government, you need F-15s and maybe some nuclear weapons”.

With this transcript showing Security Council Members all knowing the truth that even the former Soviet Union never contemplated invading America because its armed citizens using guerilla war tactics would annihilate even the most well equipped army using modern weapons and overwhelming air power—a brutal lesson Soviet forces learned in Afghanistan, and the Americans, likewise, learned in both Vietnam and Afghanistan—left unanswered is why socialist leader Biden is threatening his own citizens with F-15’s and nuclear weapons in a war even the US military knows it could never win.

Which makes it remarkable to notice Chairman of the Joint Chiefs of Staff General Mark Milley having come under withering fire this week, most notably by Fox News host Tucker Carlson, who on his most watched in American cable news programme blasted General Milley saying:

He is not and they definitely don’t.

Milley got the job because he knows who to suck up to and he’s more than happy to do it.  Feed him a script and he will read it.

Hard to believe that man wears a uniform.  He’s that unimpressive.  He’s not just a pig.  He’s stupid!

Thanks, Mark Milley. We appreciate your contribution to our generation’s scientific racism.

By the way, have you read anything recently about winning wars?

Igniting this blistering rage was Chairman-General Milley testifying this week in the US Congress, where he said:

I want to understand white rage, and I’m white.

What is it that caused thousands of people to assault this building and try to overturn the Constitution of the ?

I want to find that out.

So what is wrong with understanding, having some situational understanding about the country for which we are here to defend?

I personally find it offensive that we are accusing the United States military of being ‘woke’ or something else because we’re studying some theories that are out there.

While examining the conservative rage and leftist praise being thrown at Chairman-General Milley because of what he said, this transcript shows Security Council Members being perplexed as all this military leader did was state factual truths—best exampled in Chairman-General Milley talking about the communist books he read, which was exactly what Soviet military forces did when they read about American history and capitalist political ideology, which in simple terms is learning everything you can about your enemy—which is why both Soviet and American military commanders read the Koran and other Islamic books while fighting in Afghanistan—makes perfect sense why Chairman-General Milley wants to know why hundreds-of-thousands of Americans came to the US Capitol to protest an election, as the next time it happens they’ll most likely all be armed—and in his admitting he’s studying the communist ideology known as Critical Race Theory, it sees Chairman-General Milley doing the same exact thing as Russian military leaders, who are also trying to understand how it’s being used to destroy America from within.

Exactly like Chairman-General Milley, this transcript shows Security Council Members knowing that truth that with the new alliances forming around the world it has placed on the table a US civil war—the signs of which are growing by the day, and is terrifying Biden and his socialist forces, specifically because calls are growing to return President Donald Trump to power by August—sees President Trump’s new battle cry for the American people being “2024 or Before!”—today sees President Trump and his battle cry being championed by One America News (OAN), whose host Pearson Sharp just warned that the thousands of traitors who were behind the illegal coup against President Trump should be possibly executed—and saw this dire warning quickly followed by an outright declaration of war against Biden and his godless socialist forces issued by the Nevada Sheriff Group, who grimly stated:

The National Security Agency has every single email, cell call, text, game chat and banking transaction for every traitor, every elite pedophile and every Wall Street criminal and every corrupt government official at the local, state and federal levels.

And I remind you that no army of lawyers are going to be able to stand up to an Army Ranger battalion with fixed bayonets.

I will tell you with absolute certainty that the thing that Nancy Pelosi and Adam Schiff fear most is not jail, but us releasing their 10 most treasonous phone calls to their own public.

They will be torn limb from limb on their own streets. 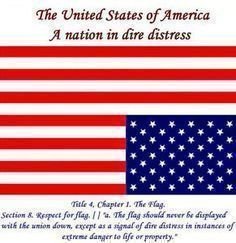 June 26, 2021 © EU and US all rights reserved. Permission to use this report in its entirety is granted under the condition it is linked to its original source at WhatDoesItMean.Com. Freebase content licensed under CC-BY and GFDL.