A shocking new Security Council (SC) report circulating in the Kremlin today first noting top infectious disease specialist Doctor-Scientist Vladislav Zhemchugov stating that a sudden sharp increase in novel coronavirus cases in Russia is possible only under a “very unlikely” scenario of a new strain, says this hopeful assessment comes as a batch of 400,000 doses of the Russian-made Sputnik V COVID-19 jab has just been delivered to Bolivia, a second shipment of the Sputnik V coronavirus vaccine has just been delivered to India and the use of the Sputnik Light vaccine has now been approved in Venezuela—but while Russia aids the world in battling back against the scourge of this pandemic, sees its efforts being bitterly opposed by the United States and European Union—which caused First Deputy Permanent Representative to the United Nations Dmitry Polyanskiy to “slam as shameful” this vile US-EU diplomatic war against Russia’s Sputnik V vaccine, and his warning: “We are living in the post-truth world when nobody pays attention to what is really happening and there are a lot of sources who present information in a distorted way, which is very often quite far from reality...All these factors bring us to a very dangerous moment in international relations”.

Astonishingly agreeing with First Deputy Polyanskiy is ’s second largest newspaper the Wall Street Journal—who in a just published article written by Senior Fellow Lance Morrow of the Ethics and Public Policy Center entitled “Can Freedom Survive the Narratives?” further warns: “We live in the age of supercharged story lines, most of which are demagogic nonsense...caused by Wokeness...which is a politics that manages to be both prissy and vicious...is a totalitarian social design that flies the flag of everything good and nice...and in reality fronts for the real problem of the 21st century: a sinister autocracy just around the corner”.

In this “post-truth world” where America is fast becoming “a sinister autocracy”, it was no surprise to see the American Academy of Microbiology electing to its membership Communist Chinese military scientist Shibo Jiang—a Communist Chinese military scientist long funded by Dr. Anthony Fauci of the National Institutes of Health—recently saw the prestigious Bulletin of Atomic Scientists publishing their bombshell research paper “The Origin Of COVID: Did People Or Nature Open Pandora’s Box At Wuhan?”, wherein it documents how Dr. Fauci secretly paid Communist China to create novel coronaviruses—which makes it more than explainable why Republicans on the House Intelligence Committee are demanding that Supreme Socialist Leader Joe Biden and Director of National Intelligence Avril Haines provide more information on the origins of COVID-19, claiming that new evidence has emerged that appears to show the virus first originated in the Wuhan Institute of Virology lab—a place that gave Dr. Fauci his title “Patron Saint of Wuhan”—and in America, sees one being able to buy Saint Fauci Religious Candles.

Now joining this human catastrophe America is fast turning itself into, yesterday it saw demonic posts made by CNN contributor Adeel Raja being revealed, that beyond shockingly said: “Hail Hitler!...Hitler was a good German and he did good with those jews!...The world today needs a Hitler”—demonic posts that were soon followed by Dr. Fauci giving an address to socialist idiot graduates at Emory University, where he claimed that Covid-19 has revealed the “undeniable racism” in the United States, and then stated to them: “Righting this wrong will take a decades-long commitment…I urge you to be part of that commitment”.

Being kept from the knowledge of the American people by their leftist propaganda corporate media, however, is the brutal truth that the call CNN made for a new Hitler isn’t needed, as for decades they’ve had in their midst one of the greatest genocidal maniacs their nation has ever created—whom the entire world knows as Dr. Anthony Fauci, most specifically the grieving American families of the over 700,000 who’ve died in the HIV-AIDS epidemic—an epidemic Dr. Fauci exploited to gain political power—saw him striking terror into America when he claimed without evidence or proof that merely by sitting next to someone with AIDS a person would be infected with this deadly disease—which is why 30-years ago, the late Dr. Robert Willner (who wrote the groundbreaking book “Deadly Deception the Proof That Sex And HIV Absolutely Do Not Cause AIDS”, and Dr. Fauci then destroyed) delivered one of the most remarkable press conferences ever seen, wherein he factually stated: “Hitler would envy the job being done at the National Institutes of Health, and even the media...and I will put the lie to the names of the individuals of the NIH...particularly Fauci...and the rest of these scoundrels of the worst order...criminals guilty of genocide without a doubt”.  [Note: Some words and/or phrases appearing in quotes in this report are English language approximations of Russian words/phrases having no exact counterpart.] 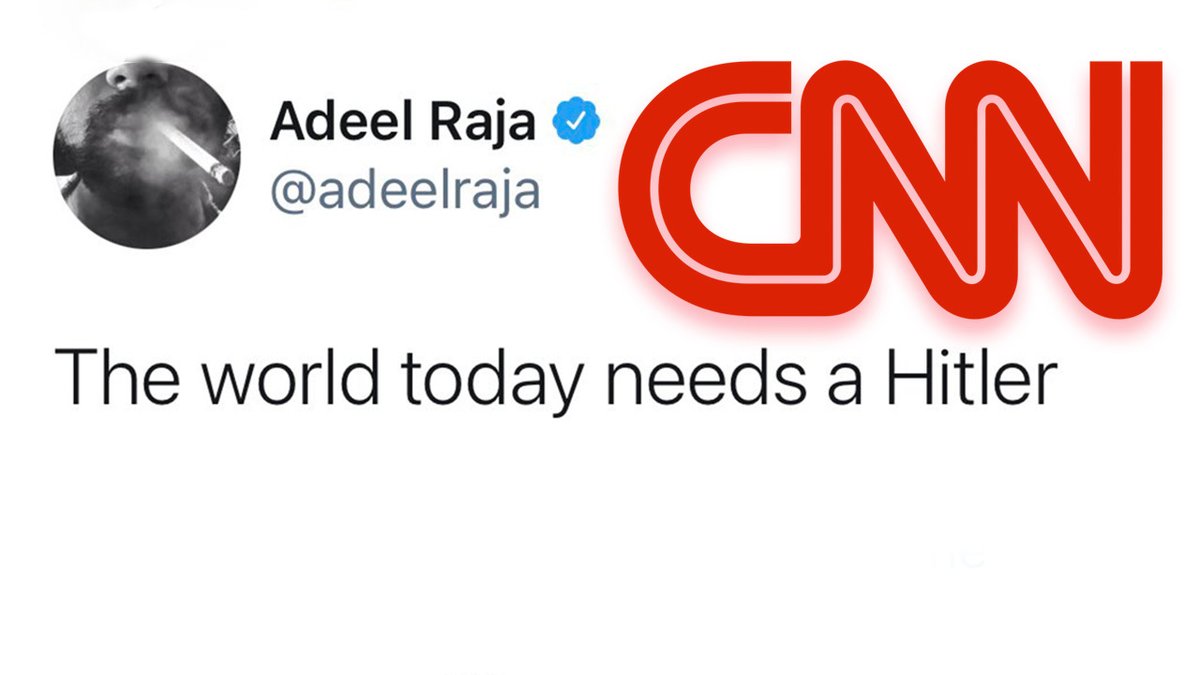 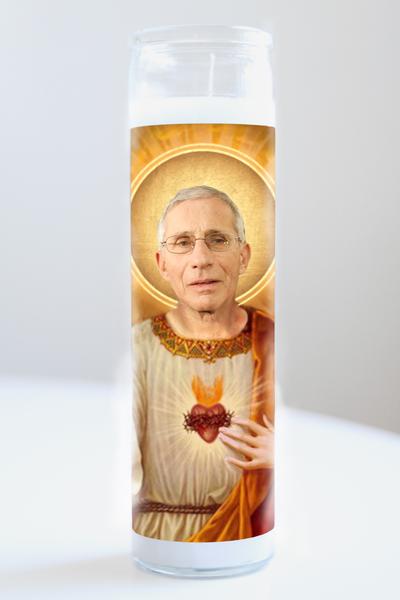 According to this report, with Saint Fauci and his leftist propaganda corporate media terrorizing the American people with COVID-19 fears like they did with the HIV-AIDS virus, last week it saw these demons being struck back against with a bombshell letter signed by the top 18 virus experts in America published in the prestigious scientific journal Science demanding a new investigation into the coronavirus—a bombshell demand joined by the release of a Danish study that tracked 10,500 Danes who had the disease in the spring of 2020 for half a year and found serious complications are rare in mild cases of COVID-19—which followed a shocking Fox News report revealing that COVID vaccination deaths in America could be as high as 30,000—then saw famed British guitarist Eric Clapton revealing to his millions of followers his fears of never being able to play again after a COVID jab caused his hands and feet to go numb—yesterday saw US CDC Director Rochelle Walensky making a stunning admission that she’s aware of 223 Americans who’ve died after receiving a COVID jab—an admission that followed globally renowned toxicologist Dr. Janci Chunn Lindsay warning the CDC that “COVID vaccines must be halted immediately”—stunning warnings and shocking revelations not being told to the American people—though the same can’t be said about the tens-of-thousands of US government scientists and disease experts working at the National Institute of Allergy and Infectious Diseases and the Food and Drug Administration, nearly half of whom are now refusing to take a COVID-19 vaccination. 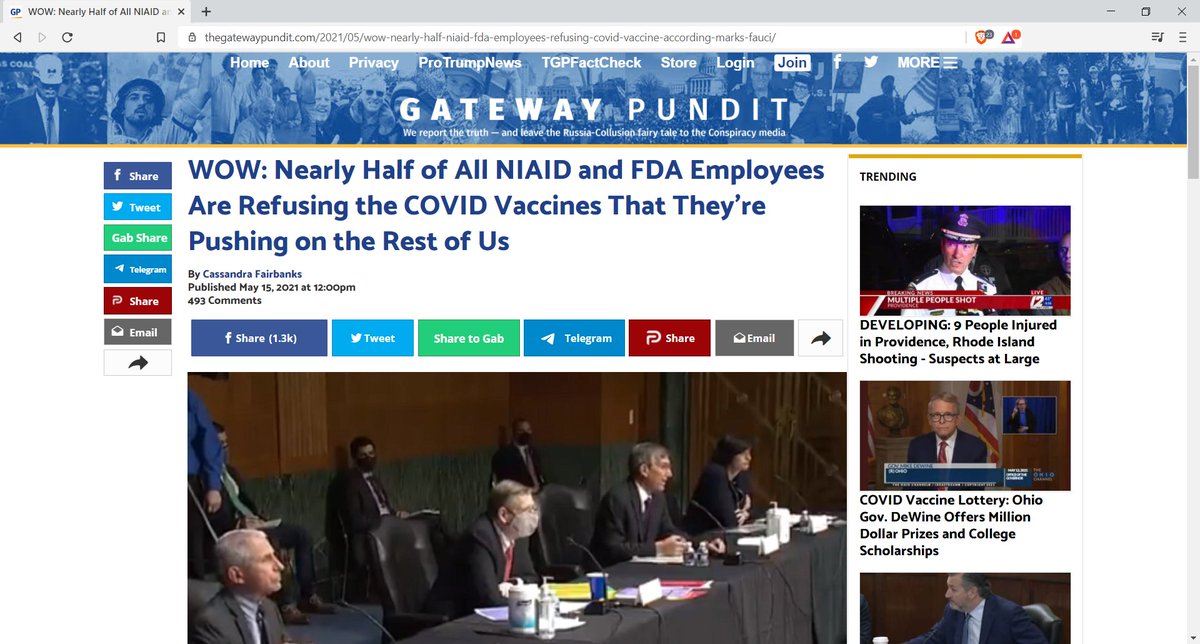 While watching the edges of this scamdemic fraying all around her, this report notes, it was no surprise last week to see CDC Director Rochelle Walensky moving from her impending doom warning to saying no masks are needed for the vaccinated—the consequence of which led to an explosion of articles like “Mass Confusion Over masks: So Can The Vaccinated Take Them Off Or Not?” and “You Can Pry My Mask Off My Cold, Dead Face– Covid Cultists Go Berserk After CDC Updates Mask Guidance, Big Box Retailers Drop Mask Mandates”—saw leftist MSNBC host Rachel Maddow reacting to the CDC’s announcement on masks by saying she would have to “rewire” her brain in order to not perceive those who don’t wear masks as a “threat”—leftist insanity joined by deranged socialist Democrat Party leader US House Speaker Nancy Pelosi ignoring the CDC and ordering everyone in the US Congress to keep wearing masks—and was followed by socialist leader Biden ordering his intelligence officials to issue a terrorism advisory warning that violent “domestic extremists” may exploit the easing of COVID restrictions to plan new attacks—but in small print saw them admitting that they have exactly zero information to indicate a specific or credible plot.

As to what is really causing this socialist outbreak of “mask-hysteria”, this report details, has just been revealed in the leftist Washington Post manifesto “The CDC’s Mask Guidance Is A Mess. Biden Needs To Clean It Up”—wherein it admits that masks have nothing at all to do with preventing the spread of COVID, and reveals that their only purpose is to keep despotic control over the American people—sees this manifesto declaring that: “The Biden administration must admit to the American people that CDC’s guidance was released prematurely and without considering all the implications and unintended consequences”—and sees this manifesto demanding that mask decisions not be left to medical science and facts, because “complex decisions need to involve other agencies and stakeholders”. 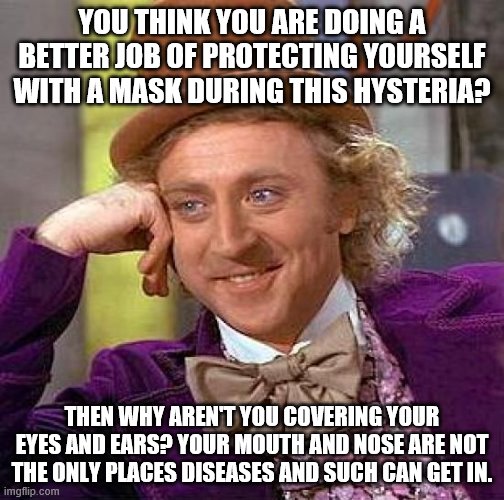 Not being understood by the masses of normal and sane Americans while they watch this socialist insanity, this report concludes, is exactly how their capitalist nation actually works—a guide to which was interestingly provided this past week by the leftist New York Times in their insightful article “This Is How Wokeness Ends”—which while noting that “Wokeness or social justice or critical race theory — is sweeping across America the way Bolshevism swept across the Russian Empire before the October Revolution in 1917”, describes the future of what’s soon to come by revealing what’s happened in the past when threats like this arise:

People who engage in this discourse have been enculturated by our best and most expensive schools. If you look at the places where the splashy woke controversies have taken place, they have often been posh prep schools, like Harvard-Westlake or , or pricey colleges, like Bryn Mawr or .

The meritocracy has one job: to funnel young people into leadership positions in society.

It’s very good at doing that.  Corporations and other organizations are eager to hire top performers, and one sign of elite credentials is the ability to do the discourse.

That’s why the C.I.A. made that widely mocked recruiting video that was like a woke word salad: cisgender, intersectional, patriarchal.

The people at the C.I.A., Disney, Major League Baseball and Coca-Cola aren’t faking it when they perform the acts we now call woke capitalism.  They went to the same schools and share the same dominant culture and want the same reputational benefits.

But as the discourse gets more corporatized it’s going to get watered down.

The primary ideology in is success; that ideology has a tendency to absorb all rivals.

We saw this happen between the 1970s and the 1990s. American hippies built a genuinely bohemian counterculture.

But as they got older they wanted to succeed.

They brought their bohemian values into the market, but year by year those values got thinner and thinner and finally were nonexistent.

They send ambitious young people powerful signals about what level of dissent will be tolerated while embracing dissident values as a form of marketing.

By taking what was dangerous and aestheticizing it, they turn it into a product or a brand.

May 17, 2021 © EU and US all rights reserved. Permission to use this report in its entirety is granted under the condition it is linked to its original source at WhatDoesItMean.Com. Freebase content licensed under CC-BY and GFDL.