An insightful new Security Council (SC) report circulating in the Kremlin today made brief due to President Putin attending the solemn Easter service at Christ the Savior Cathedral, first notes that Russia’s decades-long drive to reduce its dependence on the unpredictable US Dollar reached a milestone as the share of exports sold in US currency fell below 50% for the first time ever—a milestone reached thanks to the insane warmongering policies of Supreme Socialist Leader Joe Biden, whose every action since seizing power has showered unexpected wealth upon the Russian Federation—as further evidenced by the Central Bank of the Russian Federation (CBRF) reporting this morning that their gold and foreign currency holdings increased by a staggering $5.8-billion last week—and according to CBRF data, their foreign exchange reserves have been rising for three consecutive weeks adding another almost $15-billion.

Nearly at the same time the CBRF released this astonishing information, however, the leftist New York Times published the deranged article “Joe Biden Is Electrifying America Like F.D.R.” celebrating Biden’s socialist accomplishments—though it saw this leftist article being countered by the truthful one “Feeble Joe Biden Spends Another Weekend At Delaware Basement With No Public Events Scheduled”, wherein it notes: “Joe Biden’s behavior during his public appearances this week caused alarm…This weekend marks Joe Biden’s 7th overnight stay at his Delaware home since he was sworn into office in January...The White House discloses very little information about what Joe Biden does or who he speaks to while he is in his Delaware basement”.

In viewing the evidence of whom Biden is “electrifying” in America, though, this past week saw being included on this list America’s richest elites that boosted their fortunes by $195 billion in Biden’s first 100-days—saw being included on this list American auto giants GM and Ford, who during Biden’s first 100-days moved manufacturing plants and high paying jobs from the US to Mexico—further saw being included on this list the over 200 BLM and Antifa terrorists whose criminal records Biden has ordered sealed from public view—and most significantly added to his list was socialist leader Kamala Harris, whom Biden picked yesterday to head the National Space Council while touting her as the “perfect person” to lead US space policy—but whose only actual experience with outer space issues is her past experience of getting high while smoking marijuana.

While Biden most certainly can be seen as “electrifying” to maniacal and godless forces such as these, the rest of America have been left with “electrocution” due to his demented rule—the latest of which to be “electrocuted” is the organization founded by World War II veterans in 1944 named AMVETS, who for 32-years have celebrated the 4th of July with a massive parade of motorcycles in Washington D.C., but yesterday saw Biden banning them from having this annual parade to honor their nation’s war heroes—yet another socialist “electrocution” to be added to the lists being kept of such things like the “Dispatches From The Lunatic Asylum America Is In Danger of Becoming”—all which makes it no wonder why noted strategic affairs journalist Matthew Ehret, after his viewing Biden’s demented display at the climate summit this past week, wrote his article “Biden's Anti-Eurasian Green Delusion And America's Race To Irrelevance”, wherein he factually noted: “And so we have come full circle…The gods have certainly made those elites managing the west mad, but whether or not the entire world will have to pay the price of their insanity yet remains to be seen”.   [Note: Some words and/or phrases appearing in quotes in this report are English language approximations of Russian words/phrases having no exact counterpart.] 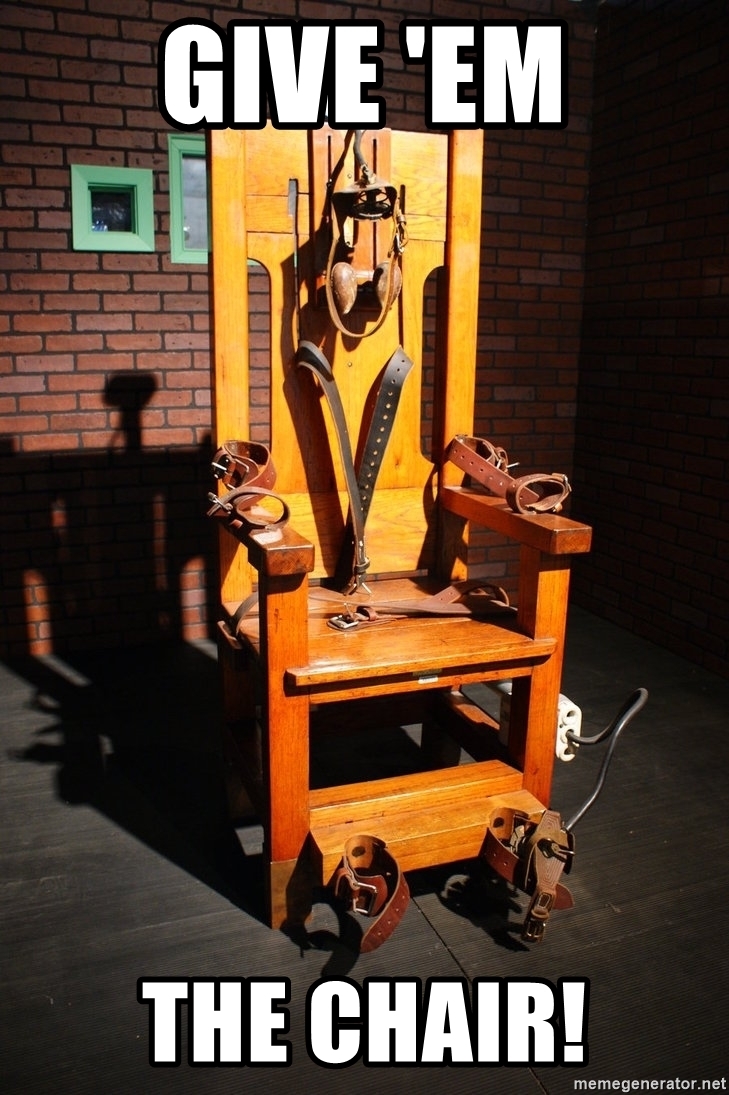 According to this report, most important to remember about this leftist corporate media lie that socialist leader Biden is “electrifying” America is that these are the same propaganda idiots that this past week banned the Redfish project when it honored the Holocaust victims of Nazi Germany, claimed that former President Donald Trump attorney Rudy Giuliani was warned by the FBI that he was a target of Russia disinformation, claimed that 85% of Americans approved of Biden’s speech before the US Congress, and on Friday published the article “Tomorrow's Special Election In Texas Is The Democrats' Best House Hope in 2021”, wherein they began celebrating the looming election victory of socialist Democrat Party candidate Lynne Sanchez, and stated: “Sanchez is the preferred candidate among much of the Dallas-Forth Worth Democratic elite, enjoying the endorsement of more than a dozen local Democratic elected officials or recent candidates”.

Over the past 24-hours, however, this report details, in quick succession it saw leftist social media giant Facebook claiming that the Redfish project “was banned by mistake”—saw the leftist New York Times, Washington Post and NBC News all retracting the lying claim that the FBI warned Giuliani about Russia disinformation—saw even the leftist fact checking site Snopes blasting the lying CBS News poll that said 85% of Americans approved of Biden’s speech—and for the leftist media hope that socialist Democrat candidate Sanchez would win her election, it saw her being roundly defeated by not just one, but two Republicans—a crushing defeat for socialist Democrats preceded by the article “Trump Wades Into Texas Special Election to Test His Kingmaking Power”—that was followed by Trump’s pick Susan Wright winning the most votes in this special election—votes received in an election having an astounding 23 candidates each needing over 50% to win, otherwise the top two candidates receiving the most votes would face each other in a run-off election—and whose two top vote getters were Trump’s pick Susan Wright and Republican Jake Ellzey—which means that Republicans have already won this US Congress seat before the run-off election is even held. 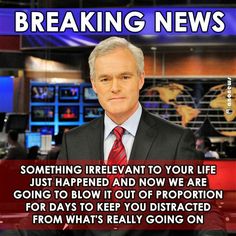 Along with Biden and his socialist Democrats being smashed by their crushing election defeat in Texas yesterday, this report concludes, Democrat Party lawmaker US Senator Joe Manchin has just given a death blow to their hopes and dreams of making Washington D.C. a State by his stating only a constitutional amendment can do such a thing—a death blow also given to Republican Party turncoat US Senator Mitt Romney, who yesterday was roundly booed and called traitor at his own Utah Republican convention—a death blow also given to Republican Party turncoat US Congresswoman Liz Cheney, whom top Republican leaders in the US Congress have formed a firing squad around, and it being predicted that she’ll be gone by the end of the month—and most importantly to notice is a death blow being given to all of the leftist media whose plunging ratings have gone into freefall—all of which while being viewed by President Trump, saw him stating after leftist social media giant Twitter watched its stock price crash: “I guess that’s what kappens when you go against FREEDOM OF SPEECH!”. 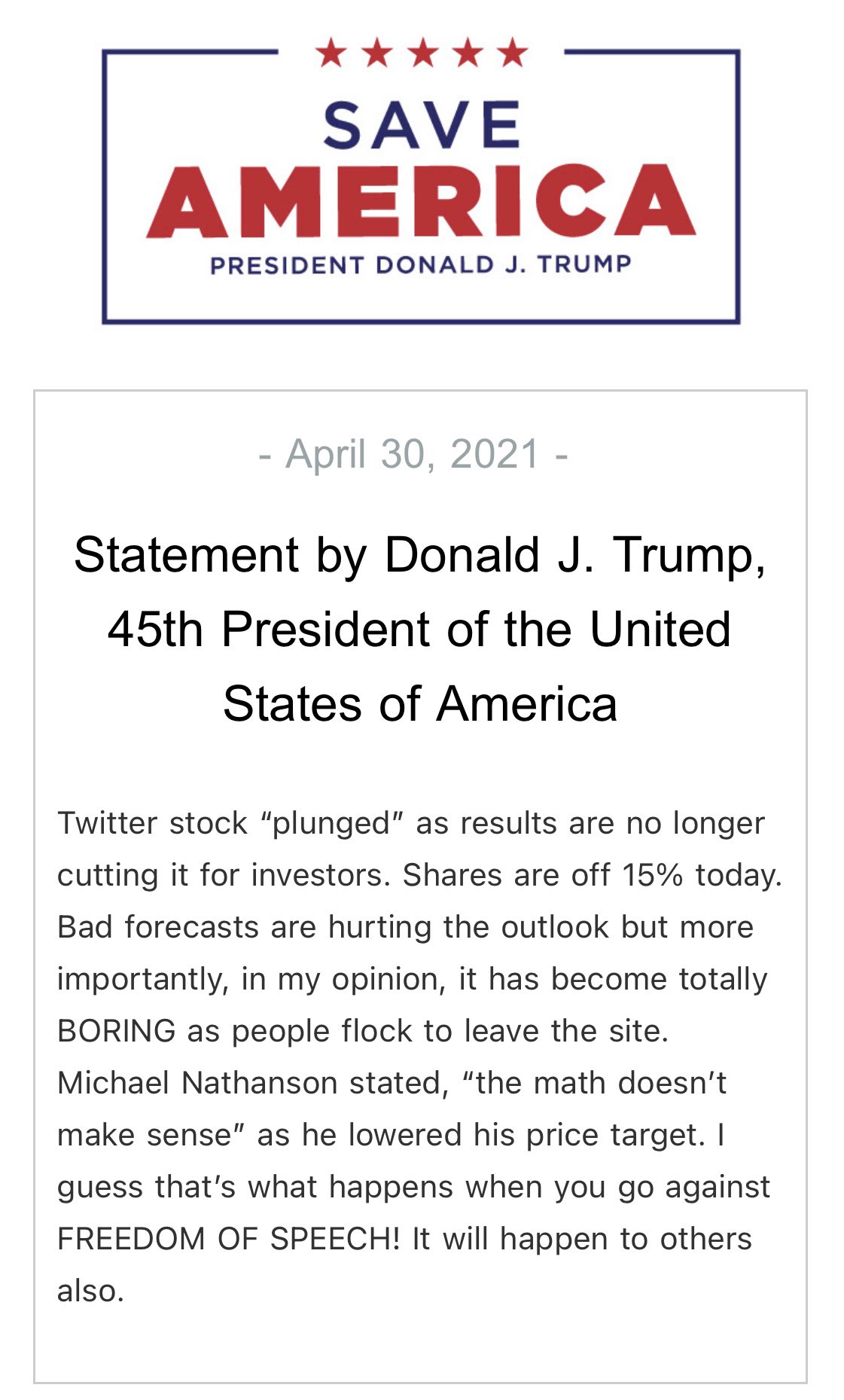 May 2, 2021 © EU and US all rights reserved. Permission to use this report in its entirety is granted under the condition it is linked to its original source at WhatDoesItMean.Com. Freebase content licensed under CC-BY and GFDL.