A thought provoking new Security Council (SC) report circulating in the Kremlin today noting Director General Mike Burgess of Australian Security Intelligence Organization (ASIO) warning yesterday that a terrorist attack in Australia is “probable” and that it’s anticipated to happen “in the next 12 months”, says his proposed solution to this threat was asking Parliament for “new powers to combat extreme ideologies”—a warning that, in turn, that caused Security Council Members to request that an immediate analysis of this threat be conducted by the Foreign Intellignece Service (SVR).

In this transcript sees a nearly two-hour break in this meeting occurring after this request was issued, and when reconvened shows discussions centering on a highly-classified “Of Special Importance” document prepared by the SVR analyzing this threat to Australia—and of the limited portions of this document permitted to be openly discussed among various ministries, its most gobsmacking revelation are in the words “Анализ секретного города”—whose translation into English are “Secret City Analysis”—the stunning and surreal significance of which shows SVR analysts placed into this document information relating to the 2016 fictionalized Australian television drama series “Secret City”, whose plot involved Australian intelligence officials secretly masterminding terrorist attacks on their own country in order to force new laws through Parliament to give them new police state powers.

With this SVR document showing that no present terrorist threat exists for Australia, it does note that after the Obama-Biden Regime overthrow of the legitimately elected government of Ukraine in 2014—an overthrow the world’s leading private intelligence firm Stratfor (aka “The Shadow CIA”) called “The most blatant coup in history”—it saw Obama installing a Neo-Nazi government in Ukraine that quickly received backing from Australian military and intelligence forces—and whose power has grown to such an extent, this week it saw tens-of-thousands of Neo-Nazi forces in Ukraine marching in their capitol city Kiev to celebrate their demonic Nazi Germany past—and about which Russian news services have reported: “Wednesday’s march in memory of the 14th SS Division ‘Galicia’ in downtown Kiev demonstrate that Ukraine is a fascist state that its leaders are guilty of turning a blind eye to…And with the exception of German and Israeli officials, the West pretends not to notice”.

To defeat Nazi German forces during World War II it cost the lives of over 26-million Russian citizens living in the former Soviet Union—which is why the Russian Federation today maintains a constant global education system to alert the world about the dangers of Nazi fascism—one part of which is Russian international television network RT broadcast in English, Spanish, French, German, Arabic, and Russian, specifically its award-winning Berlin-based digital content project Redfish—a Redfish project that on 28 April posted the message to its over 830,0000 followers on Facebook saying: “Today marks 76 years since Italian fascist dictator Benito Mussolini was executed, ending 20 years of dictatorship in Italy”, and reminded the world of the German Nazi holocaust that exterminated millions of innocent Jews—a posting of historical truth that was beyond shockingly followed by American social media giant Facebook banning the Redfish project from existence.

An extermination of Redfish and its truthful information about Nazis quickly responded to by RT editor-in-chief Margarita Simonyan, who lashed out at Facebook for suspending the page of Redfish and said she will try to have the social network itself banned if the decision is not reversed—saw her further stating: “It’s not quite clear what this ‘community’ found so insulting. Was it the Mussolini photo, the reference to Holocaust, or the very existence of the Redfish project, which the Western establishment has long been irritated about”—that was followed by General Secretary Anthony Bellanger of the International Federation of Journalists raging against Facebook saying: “There are grave concerns that an unaccountable private corporation like Facebook can decide, which political views it allows and which it decides to censor”—both of whom were joined by famed war journalist Nebojsa Malic observing: “Could it be that Facebook is seeking to suppress accurate historical information about WWII?...One is certainly tempted to reach that conclusion, given the series of “oversights” and “mistakes” perpetrated by the US government and Western mainstream media on the subject in recent years...Apparently they are so flush with success in “fortifying” the 2020 US elections, these companies think they can be the arbiters of truth for the entire world – and don’t seem to mind if that translates into defending literal fascists and Nazis...Your freedom and democracy at work!”.

After examining these issues this transcript shows a discussion taking place involving the possibility that Australia and America are training their Neo-Nazi forces in Ukraine in order to secret them into their own countries to commit terrorist acts so new and crushing police state laws can be enacted—the blueprint for which the United States has perfected for decades and unleashed on multiple nations so they can justify using military power to subdue anyone daring to stand up to them—sees this coming at the exact same moment Supreme Socialist Leader Joe Biden has ordered the Pentagon to immediately halt construction on the border wall to protect America’s vulnerable from infiltration southern border—an order quickly followed by Pentagon Chief Lloyd Austin cryptically warning yesterday: “The way we fight the next major war is going to look very different from the way we fought the last ones”—that was joined by a another warning being sounded this week that “The American right is the new target for Washington’s war on terror”—sees these warnings coming at the same time a leftist NBC survey found Biden is less popular than police and other law enforcement agencies by 8%—all of which when viewed by noted Washington Times journalist Charles Hurt sees him grimly observing: “Maybe that’s why Mr. Biden wants to pull troops out of Afghanistan…He wants to redeploy them here at home for his newest global war on terror”.

Among the growing mountain of evidence that socialist leader Biden intends to initiate a “false flag terrorist attack” so he can wage war against those Americans opposing his dictatorial rule and brand them as white Nazi racists, this transcript shows a troubling discussion taking place related to the police state activities being undertaken by the Federal Bureau of Investigation (FBI)—an organization said to be America’s premier investigative law authority, but whose very concerning activities brings this into serious doubt—as instead of targeting criminals preying upon the American people, this past week alone saw them using their manpower and resources to raid the homes of two of President Donald Trump’s attorneys—that was followed by the FBI posting a photo of an elderly grandmother who they claim entered the US Capitol on 6 January, and they want her fellow citizens to find for them—then saw the FBI deploying 12 heavily armed agents to break down the door of a Homer-Alaska home, where they held at gunpoint a young mother named Marilyn Hueper, along with her husband, screamed and accused her of stealing the computer of socialist Democrat Party leader US House Speaker Nancy Pelosi, though when they looked at the photo they had, they realized they terrorized the wrong women—a needless raid to terrorize a young family bringing into grave doubt the FBI’s competency to investigate anything or anyone—and while all of this was occurring, a single man identified only as a “Trump supporter” risked his life to infiltrate a leftist Antifa terrorist group in Sonoma County-California to secretly record them making plans to kill police officers—which one would logically think is supposed to be want the FBI is supposed to be doing.

Towards the end of this transcript it sees Security Council Members discussing if the United States is about to face its own “момент генерала”—the English language translation of is “General moment”—and is a direct reference to the astonishing letter that was published this week in the French magazine Valeurs Actuelles entitled “Pour un retour de l’honneur de nos gouvernants » : 20 généraux appellent Macron à défendre le patriotisme”—that in English says “For A Return Of The Honor Of Our Rulers: 20 Generals Call On Macron To Defend Patriotism”—an open letter to French President Emmanuel Macron signed by 20 retired generals and another 80 officers that has rocked France to its very core—wherein it issues a dire warning against the insane socialist policies tearing their nation apart declaring: “It is no longer time to procrastinate, the hour is grave, otherwise tomorrow the civil war will put an end to this growing chaos, and the deaths, for which you will bear the responsibility, will number in the thousands”—but whose warning won’t be heeded by socialist leader Biden, as civil war and mass death is exactly what he and his socialist forces are planning for.  [Note: Some words and/or phrases appearing in quotes in this report are English language approximations of Russian words/phrases having no exact counterpart.] 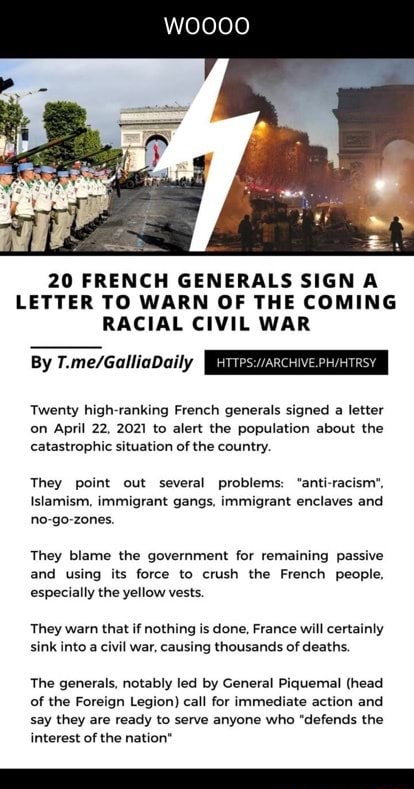 May 1, 2021 © EU and US all rights reserved. Permission to use this report in its entirety is granted under the condition it is linked to its original source at WhatDoesItMean.Com. Freebase content licensed under CC-BY and GFDL.