An intriguing new Security Council (SC) report circulating in the Kremlin today first noting the Ministry of the Interior (MVD) banning 122 foreigners from entering Russia for 40-years after they attended unauthorized protests in Moscow, says the right of sovereign nations to govern their own domestic affairs without outside interference is an age old concept lost on Supreme Socialist Leader Joe Biden, who yesterday attacked his own NATO ally Turkey by declaring that its actions against Armenians during World War I was a genocide—an interference into the internal affairs of Turkey coming at the same time the United States still refuses to acknowledge its genocide of Native American peoples, whose numbers were reduced to fewer than 238,000 by the late 19th Century from their high point of up to 15-million—sees such histories not being able to be blamed on present day governments whose officials weren’t even alive when these events occurred—thus explaining why Turkey is now fuming and stating as fact: “After more than 100 years of this past suffering, instead of exerting sincere efforts to completely heal the wounds of the past and build the future together in our region, the US president's statement will not yield any results other than polarizing the nations and hindering peace and stability in our region”.

Most interesting to notice, though, is that this Biden attack on Turkey followed by days the Presidential Address to the Federal Assembly made by President Putin—an address where for the best part of an hour and a half, President Putin concentrated on domestic issues, detailing a series of policies that amount to the Russian state helping those in need—low income families, children, single mothers, young professionals and the underprivileged—and wherein President Putin devoted less than two minutes to international affairs and national defense.

In analyzing President Putin’s address, the American article “Putin Rewrites The Law Of The Geopolitical Jungle” noted: ““The “West” was not even mentioned by name…Only indirectly, or via a delightful metaphor, Kipling’s Jungle Book…Foreign policy was addressed only at the end, almost as an afterthought”—then it stated the most important truth about the United States and its insane global policies known by everyone in the world: “The era of a unilateral Leviathan imposing its iron will is over”.

Apparently, however, by attacking Turkey in a geopolitical jungle President Putin now rules over, socialist leader Biden doesn’t seem to realize that his nation’s maniacal plans for global domination are already dead—a death previously declared by those like Russian military expert Andrei Martyanov, who in his scholarly book “Losing Military Supremacy: The Myopia of American Strategic Planning”, published in 2018, noted such true facts like: “Time after time the American military has failed to match lofty declarations about its superiority, producing instead a mediocre record of military accomplishments…Starting from the Korean War the United States hasn’t won a single war against a technologically inferior, but mentally tough enemy”.

Adding to this 2018 death declaration of ’s deranged global ambitions based on military power, last week it saw articles appearing like “The United States Has Declared Defeat In Two More Wars”, that truthfully notes:

President Biden announced last week that he planned to remove all combat troops from by September, which he says will mark the end of what is now a twenty-year war in the central Asian country.

A week earlier, the US and Iraq reaffirmed a deal to withdraw “any remaining combat forces” from Iraq, and to further wind down the US involvement there, which dates back to the 2003 invasion.

In both cases, of course, the stated plans to end military intervention have been framed in polite language designed to make it look like the US is leaving on its own terms—and also to allow the US regime some level of plausibility when it claims “mission accomplished.”

In reality, of course, both and are just two more wars that the has lost in a long list of botched military interventions dating back to and .

Moreover, these withdrawals signal the ’s continued geopolitical decline in a world that is becoming multipolar and highly motivated to bring to a final end the ’s vanishing “unipolar moment.”

Though President Donald Trump knew the reality that the “unipolar moment” for the United States to control the world by military forces has vanished—which is why he tried to logically steer his nation inward to an American First policy that left other nations alone—when socialist leader Biden and his warmongers seized power they began using Ukraine as a battering ram against Russia in order to reestablish their ambitions of hegemony—a desperate feeble move President Putin liked to hyenas trying to bother a tiger—but whose truest reality about saw defense expert Martyanov gleefully noting “the cultural shock when Brussels and D.C. started to suspect that Russia doesn’t ‘want’ Ukraine”—and his stating: “What Russia wants is for this country to rot and implode without excrement from this implosion hitting Russia…The West’s paying for the clean up of this clusterfuck is also in Russian plans for Ukrainian Bantustan”.  [Note: Some words and/or phrases appearing in quotes in this report are English language approximations of Russian words/phrases having no exact counterpart.] 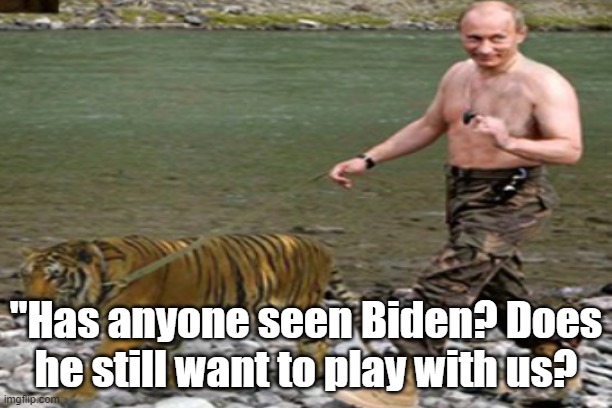 April 25, 2021 © EU and US all rights reserved. Permission to use this report in its entirety is granted under the condition it is linked to its original source at WhatDoesItMean.Com. Freebase content licensed under CC-BY and GFDL.