A fascinating new Security Council (SC) report circulating in the Kremlin today first noting the Ministry of Defense (MoD) authorizing the deployment of the feared Belgorod nuclear submarine carrier with Poseidon nuke drones to serve in the Pacific, says this decision was made after Moscow held unscheduled emergency talks with the United States yesterday over fighting in Donbass as Ukraine says NATO exercises will train its troops for war with Russia—emergency talks occurring as Europe is expected to see the largest deployment of US forces since the start of the 21st Century, with around 20,000 American troops participating, along with a 17,000-strong contingent from NATO member states and non-members like Ukraine—and after these emergency talks, saw Deputy Foreign Minister Sergey Ryabkov directly warning Supreme Socialist Leader Joe Biden: “Washington should be concerned about the consequences of this coordinated policy”.

A warning quickly joined by Foreign Ministry spokeswoman Maria Zakharova telling the Americans that Russia would be forced to defend itself if Western nations go through with plans to station short and long-range missiles in Europe to make it possible to deliver deep missile strikes in order to neutralize enemy air defense systems—with her adding: “We cannot help but notice the obsession of these Anglo-Saxon commanders on the task of defeating purely defensive units designed to ensure the security of the Russian Federation in the event of a military attack”.

Troubling war events that were then quickly followed by Biden insanely ordering sanctions placed on NATO’s second largest military member Turkey—that were predictably followed by Turkish President Erdogan ordering the arrest of ten Navy Admirals and his warning of a coup—and is a coup warning justified, as in 2016 the Obama-Biden Regime attempted to overthrow President Erdogan in a coup.

Insanities being displayed by Biden and his socialist warmongers leading to questions being raised as to whom exactly is in control of the United States as it plunges itself towards World War III—and a strong clue to which was provided by top Republican Party leader US Senate Minority Leader Mitch McConnell, who in a withering letter released yesterday, claimed that big businesses in America have created a “Woke Parallel Government”—and saw him gravely warning his nation’s citizens: “We are witnessing a coordinated campaign by powerful and wealthy people to mislead and bully the American people”.

A warning that more than explains why this transcript shows Security Council Members discussing at length a highly-classified “Of Special Importance” document prepared by the Foreign Intelligence Service (SVR)—a document whose portions of permitted to be openly discussed among various ministries begins with an examination of a mysterious organization known as QAnon—an organization that Time Magazine listed in their “The 25 Most Influential People On The Internet” in 2018---whose origins of SVR intelligence analysts tracked to one of the wealthiest enclaves in America known as Beverley Hills-California—and from where, during the 2020 election, in this deepest State of California stronghold of the socialist Democrat Party remarkable articles began appearing like “Trump Expanded His Support In Beverly Hills, A Rare Spot Of Red In Blue L.A. County” and “How Did Beverly Hills Become A Hub For Conservative Rallies?”.

SVR intelligence analysts examining the origins of QAnon centered their attention on a wealthy Beverley Hills resident named Mark Paul—whose shadowy links with both the CIA and US Army intelligence he describes in his book “The Greatest Gambling Story Ever Told: A True Tale Of Three Gamblers, The Kentucky Derby, And The Mexican Cartel”—and over the past five months, SVR intelligence analysts tracking Mark Paul and his US military intelligence connections’ activities over the “dark web”, saw emerging a highly-sophisticated communication network to enlist the 2.7 million US military service members that have been to the war zones of Iraq and Afghanistan in a plot to swamp the polls in the Blue States not requiring voter ID to avenge the 2020 election stolen from President Donald Trump.

A plot, without any doubt, also discovered by the FBI—which threw them into such a panic they conducted a legally dubious blanket seizure of hundreds of customers' belongings held in private safety deposit boxes at the U.S. Private Vaults in Beverly Hills—and is a U.S. Private Vaults company that lists as its leader Chief Executive Officer Mark Paul.  [Note: Some words and/or phrases appearing in quotes in this report are English language approximations of Russian words/phrases having no exact counterpart.] 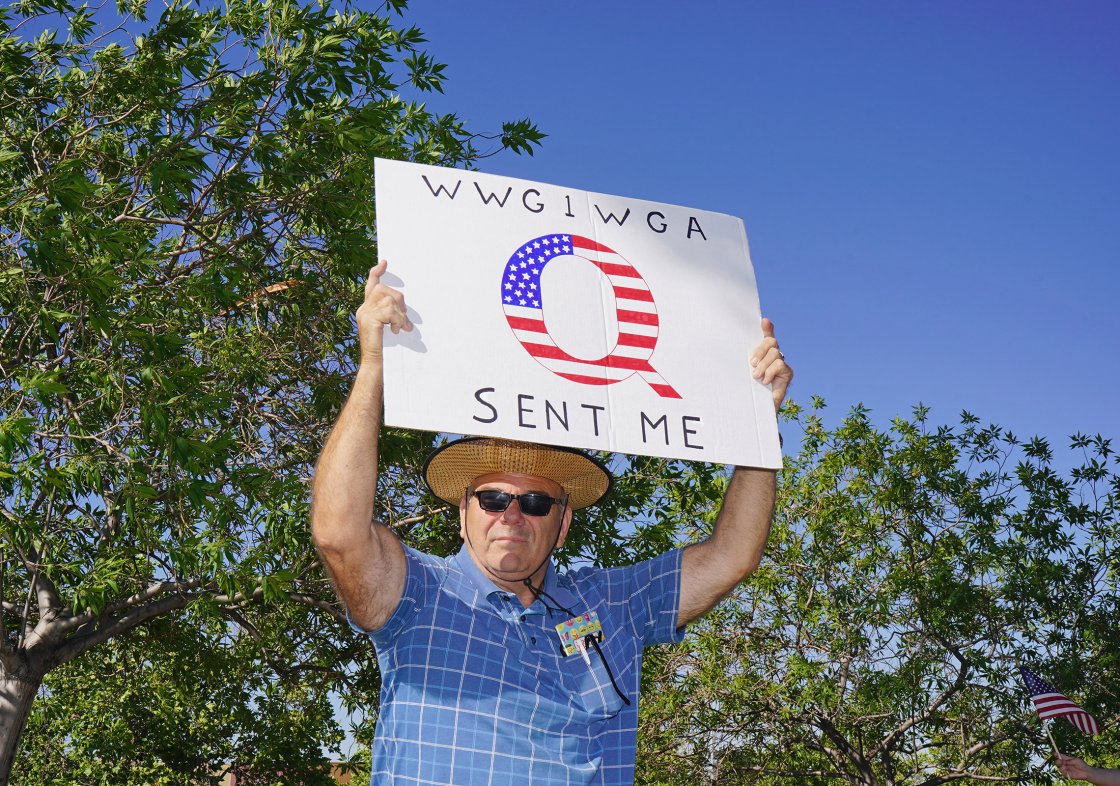 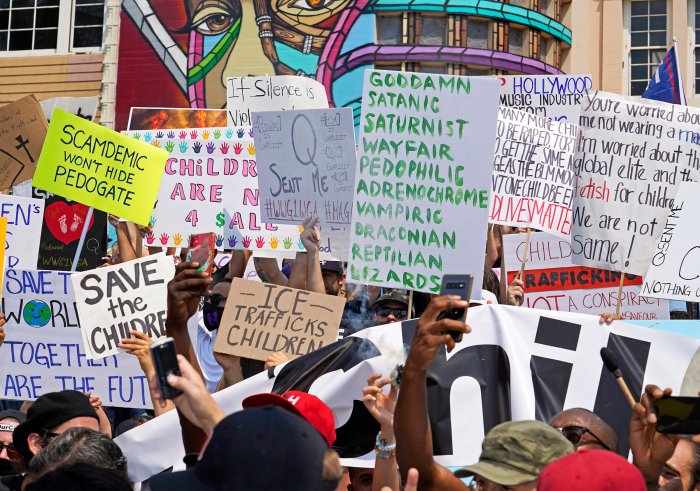 Supporters of President Donald Trump holding QAnon signs began massing by the thousands in Beverly Hills-California (2 photos above) during 2020 election.

According to this report, for reasons that have never been logically explained, and unlike every other Western democracy, the United States still allows election ballots to be cast in 16 of its States without voters having to show an ID—the most noteworthy of which are California, Illinois, Maryland, Massachusetts, Minnesota, New Jersey, New Mexico, New York, Oregon, Pennsylvania and Vermont—and are noteworthy because they are all one-party States tyrannically ruled over by socialist Democrats for decades, where the citizens enslaved in them have no democratic power whatsoever.

In confirmation of US Senate Minority Leader McConnell’s warning that big businesses in America have created a “Woke Parallel Government”, this report notes, 200 American corporations signed a letter opposing voter ID yesterday—and interesting to notice, sees every single one of these corporations requiring people to show an ID to buy their products and/or services, as well as having to present an ID to even enter their buildings.

With new polls showing voter identification requirements are supported by 72% of the American public, this report details, what’s most important to notice is that this is supported by 91% of Republicans and 56% of Democrats—which means voter ID requirements are a non-partisan issue—thus proving that this “Woke Parallel Government” doesn’t truly represent the American people.

The critical importance of knowing who this “Woke Parallel Government” represents, this report explains, will make the difference between war and peace—specifically because with them now being in control of America, as Senator McConnell confirmed, the Kremlin must now assess the mental competency of this “Woke Parallel Government” and its ability to make logical and rational decisions.

In the initial assessment of this “Woke Parallel Government” now in control of America, this report continues, it bears noticing that they’ve created for themselves a new soft drink called “Woka-Cola”—a soft drink created by global beverage giant Coke as part of their opposition to Georgia’s new election law—is the same Coke that fully supports with these other 200 corporations the “Genocide Olympics” to be held in Communist China—but as to what these corporations are really protesting about makes no logical sense, as the Wall Street Journal said about Georgia’s new election law: “The legislation is in no way a return to Jim Crow, but rather an honest effort to improve election integrity”, and the leftist New York Times further said about it: “The law’s voting provisions are unlikely to significantly affect turnout or Democratic chances…It could plausibly even increase turnout…In the final account, it will probably be hard to say whether it had any effect on turnout at all”.

In spite of these truths being known about Georgia’s new election law, however, this report further notes, socialist leader Biden “declared economic warfare on Georgia”—a declaration of economic war joined by Major League Baseball pulling its All Star Game out of the most prosperous black-majority city in America to cost the city of Atlanta-Georgia over $100-million—and to make this humiliation of the black citizens of Atlanta complete, then saw Major League Baseball moving their All Star Game to the majority white city of Denver-Colorado, where its voting ID laws are stricter than those in Georgia.

While viewing the atrocities being committed by this “Woke Parallel Government”, this report concludes, it caused top Republican Party leader Mike Huckabee to post the comical message: “I’ve decided to ‘identify’ as Chinese…Coke will like me, Delta will agree with my ‘values’ and I’ll probably get shoes from Nike & tickets to @MLB games…Ain’t America great?”—though for what the American people are really feeling right now, sees it being best explained in articles like “What I Wouldn’t Give for a Shave That Isn’t Woke”, that says: “From my closet to my bathroom, my house is full of leftist brands…It’s time to do something about it”—and is a sentiment wholeheartedly in agreement with a Kremlin that is waiting for the American people to rise up against these insane socialist idiots, otherwise, and most assuredly, Russia “will do something about it”. 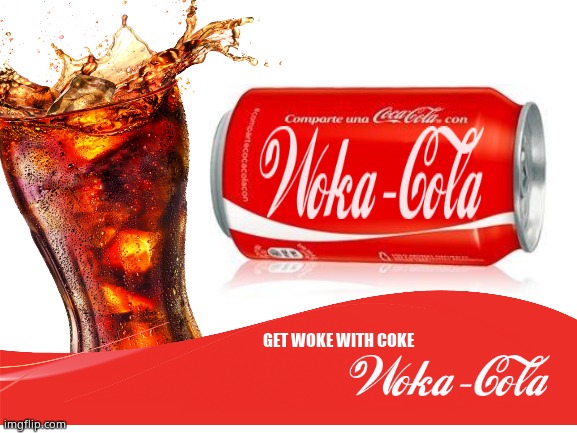 April 6, 2021 © EU and US all rights reserved. Permission to use this report in its entirety is granted under the condition it is linked to its original source at WhatDoesItMean.Com. Freebase content licensed under CC-BY and GFDL.