Officially Warns Its Citizens: “The West Is Preparing For Nothing Less Than War With Us”

A foreboding and brief new Security Council (SC) report circulating in the Kremlin today first noting the Italian government expelling two Russian diplomats from the country, yesterday, after an Italian navy captain who was caught passing secret documents belonging to the NATO member state to a Russian military official on Tuesday night, sees this transcript showing Security Council Members all agreeing that this action conforms to the normal protocols of state spycraft, and them saying that if NATO military officers want to exchange secrets for money, Russian military intelligence officials have no choice other than to oblige them before someone else does.

Normal protocols of state spycraft, however, US intelligence officials no longer have available to them as “human intelligence dries up” into the workings of Mexican drug cartels flooding America with illegal migrants and drugs, and this week saw current and former senior intelligence officials in both countries telling Reuters that US efforts to combat powerful drug cartels inside Mexico have come to a standstill since January as relations fray between them—and sees this breakdown of US intelligence operations coming at the same time NATO scrambled fighter jets 10-times on Monday to track and intercept an unusual “rare peak” of Russian bombers and fighters flying over the North Sea, Black Sea and Baltic Sea, with it further being reported: “The Russian activity across an unusually wide area of European skies came on the same day North American Aerospace Defense Command said it tracked Russian aircraft off the coast of Alaska”.

Events that were preceded by Foreign Ministry spokeswoman Maria Zakharova accusing the United States of “trying to cultivate the image of an external enemy” as a way to distract attention from their own domestic problems, and her warning Supreme Socialist Leader Joe Biden and his regime: “We urge you not to play with fire”—a warning ignored as Biden and his socialist henchmen quickly concocted lies about Russia interfering in the 2020 election—the sheer absurdity of which led to such articles being published like “They're Not Even Trying To Make Sense Now”, wherein it observed: “In short, we are supposed to believe that in 2016 the Russian hacked nothing but the election and in 2020 they hacked everything but the election”.

Socialist insanity coming at the same time Biden is ignoring the numerous US convoys being attacked in Iraq—then yesterday it saw Biden’s favorite US general turned arms industry lobbyist Ben Hodges outlandishly saying that no Russians died in World War II, only Ukrainians—a lie of historic proportions as Russia lost up to 26-million citizens in World War II, as opposed to the United States that saw 405,399 deaths from all causes in this war, and is why on the 70th Anniversary of this war ending even the leftist Washington Post acknowledged the truth in their article “Don’t Forget How The Soviet Union Saved The World From Hitler”—though to explain what Biden and his vile socialist forces are doing, it sees Foreign Ministry spokeswoman Maria Zakharova stating: “Our foreign partners have long made it a norm to pretend that the destruction of Nazism took place allegedly without involvement of the Soviet Union…We see historic knowledge, followed by public opinion, becoming a subject of entire informational special operations with involvement of heads of states, ministers of foreign affairs”.

While Biden and his socialist forces are attempting to rewrite the entire history of the world and America to conform to their godless ideology, however, it comes at the same time war propaganda articles are appearing in the US like “Russia Massing Troops on Ukraine Border; US Forces in Europe Raise Watch to Highest Level ‘Potential Imminent Crisis’”—“Russian Armor Floods Toward Border With Ukraine Amid Fears Of An “Imminent Crisis””—and—“Russian Troop Movements on Ukraine Border Test Biden Administration”—the latter of which correctly noted that Russia’s most watched news host Dmitry Kiselyov warned in a dramatic interlude during his News of the Week program on state television Sunday that “The West Is Preparing For Nothing Less Than War With Us”—a warning of total war not being given to the American people so they can prepare for this nuclear weapons conflict like the Russian people are now doing—and in a final warning to Biden and his socialist forces, this morning Kremlin spokesman Dmitry Peskov plainly stated: “Moscow is taking all the necessary measures to ensure security of its frontiers…The Russian Federation transfers the Armed Forces on its soil as it wants to…This should not concern anyone and this is not posing any threat to anyone”.  [Note: Some words and/or phrases appearing in quotes in this report are English language approximations of Russian words/phrases having no exact counterpart.] 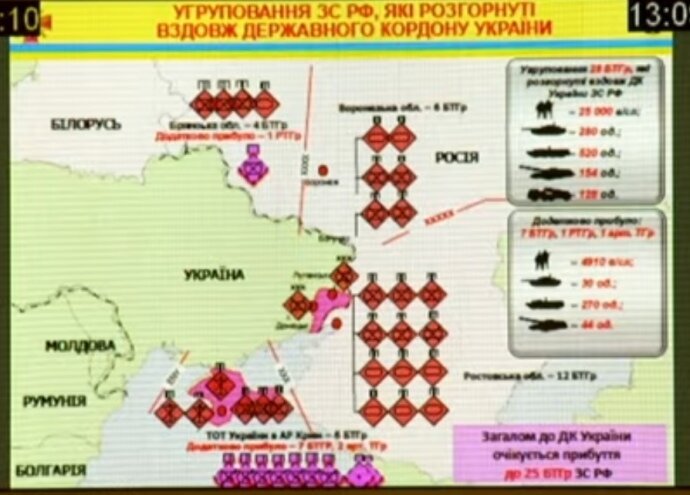 This is what war looks like—always be prepared!

April 1, 2021 © EU and US all rights reserved. Permission to use this report in its entirety is granted under the condition it is linked to its original source at WhatDoesItMean.Com. Freebase content licensed under CC-BY and GFDL.