A tensely worded new Ministry of Defense (MoD) report circulating in the Kremlin today noting that the United Nations Security Council has just agreed to a joint Russia-China demand to “hold an emergency session” on Thursday (22 August) on United States missile projects that violate the Intermediate-Range Nuclear Forces Treaty, states that in less than 3-weeks from when the US abandoned this 32-year-old treaty, its military forces conducted a test of these prohibited nuclear missiles—a testing that confirms the US is preparing to place these nuclear missiles in Greenland—where, since February-2018, the United States Army Corp Of Engineers has undertaken one of the most secretive projects in its modern day history at the Thule Air Base they call a “major base consolidation”—but which, in fact, MoD satellite evidence shows them feverishly working to modernize and update America’s nuclear powered base under the Greenland ice sheet called Camp Century which controls the feared top-secret nuclear missile “Project Iceworm”—work being rapidly done as this secretive nuclear base is literally melting right out of the Greenland ice sheet—and whose unmistakable target for these US nuclear missiles will be the three military-grade airports Communist China is preparing to build there.  [Note: Some words and/or phrases appearing in quotes in this report are English language approximations of Russian words/phrases having no exact counterpart.] 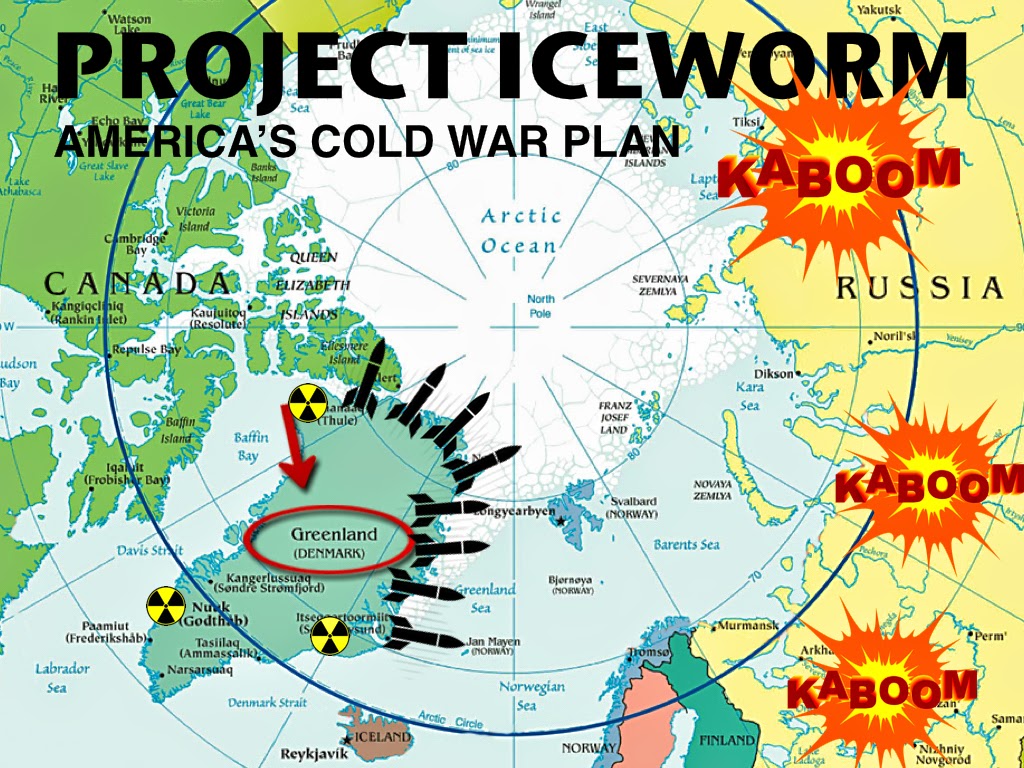 According to this report, Greenland is the world's largest island that is three times the size of Texas and almost 50% larger than Alaska—is located near entirely in the Arctic Circle and strategically positioned at the halfway point between Washington D.C. and Moscow—and is mistakenly referred to as an autonomous country of the Kingdom of Denmark—a designation that denotes a subdivision or dependent territory of a country that has a degree of self-governance, or autonomy, from an external authority.

The true status of Greenland, this report details, rests in an 1823 declaration made by the United States called the Monroe Doctrine—a declaration that saw America warning the entire world that the entire Western Hemisphere was under its full military protection and they would never tolerate any foreign interference in it—a declaration that exploded into full force during World War I when Denmark declared its neutrality—a neutrality that then saw the United States invoking its Monroe Doctrine to force Denmark into signing the Convention Between The United States And Denmark For Cession Of The Danish West Indies in 1916—otherwise known as the “Treaty of the Danish West Indies” that forced Denmark to sell to the Americans what is now known as the United States Virgin Islands—and because of, saw Germany being denied the use of these Western Hemisphere islands from which they could launch submarine attacks against US and Allied shipping.

In 1940, during World War II, this report continues, the United States invoked the Monroe Doctrine once again against Denmark—a Denmark that had been invaded and occupied by the Nazi Germans the year prior in 1939—but nevertheless saw American Secretary of State Cordell Hull and Danish Ambassador Henrik Kauffmann signing, on 9 April 1941, the agreement titled Denmark–United States Agreement For The Defense Of Greenland—an agreement that explicitly extended the Monroe Doctrine to Greenland, identifying this Danish colony for the first time as part of the hemisphere within which the United States would not tolerate the intervention of other foreign powers—and which granted the American government temporary control over the security of the island, until such time as “the dangers to the peace and security” of the continent had passed—thus, and in fact, making Greenland a protectorate of the United States under international law. 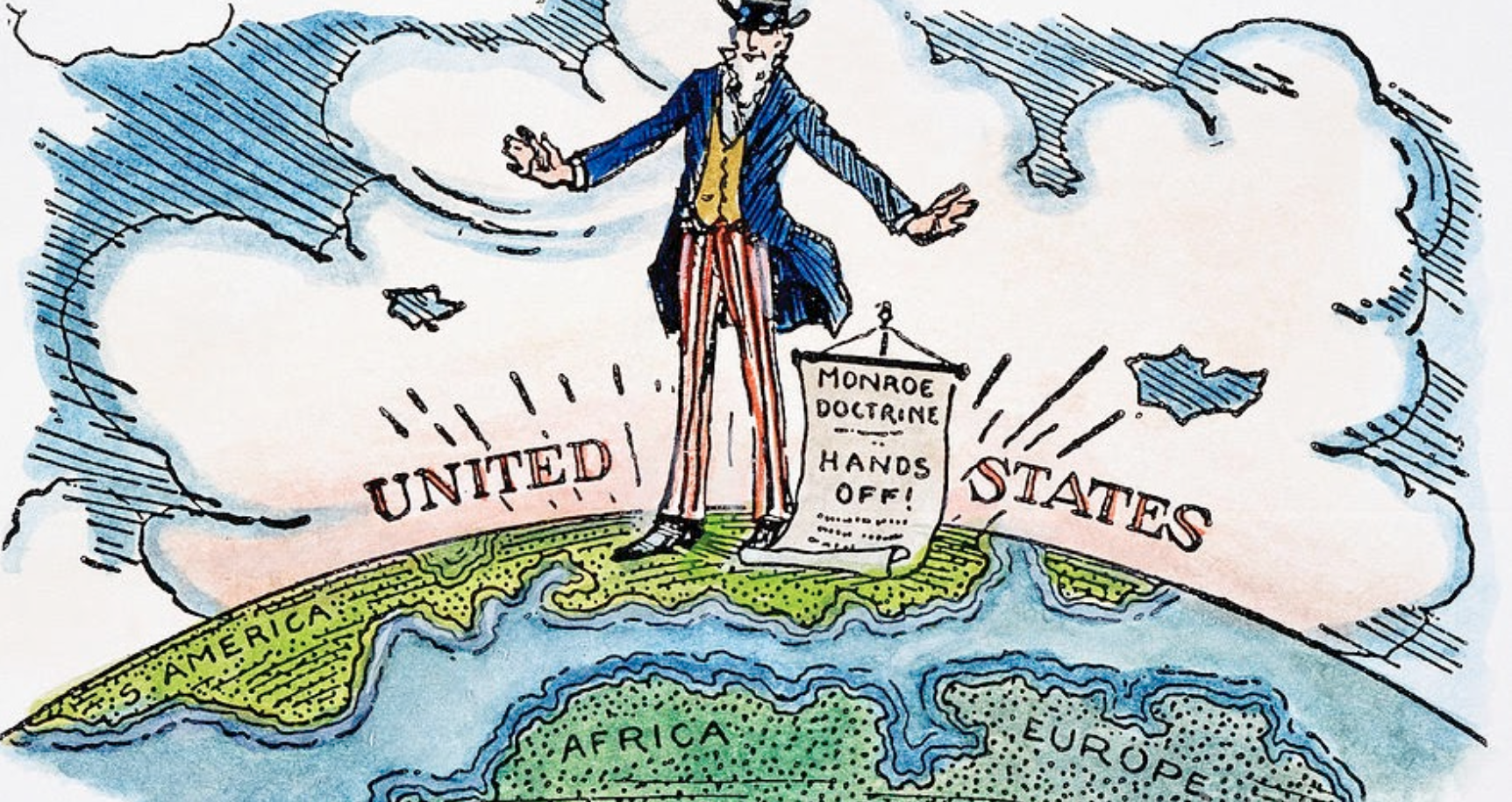 In the aftermath of World War II, this report notes, “the dangers to the peace and security” of the continent had, indeed, passed with the defeat of the Nazi Germans, but the agreement extending Monroe Doctrine protections for Greenland remained in full force—that is until 1951 when a new agreement was signed called the Defense of Greenland: Agreement Between the United States and the Kingdom of Denmark—which remains in full force today, thus making Greenland a military protectorate of the United States.

In November-2013, however, this report continues, President Barack Obama's Secretary of State John Kerry shocked the world when he told the Organization of American States that the “era of the Monroe Doctrine is over”—a short lived death of this 1823 declaration as, in 2017, President Donald Trump, as well as his Secretarys of State Rex Tillerson and Mike Pompeo, began telling the world that not only is the Monroe Doctrine still in full force and effect, it would be specifically targeting Communist China interference in the Western Hemisphere—and which saw in March-2019, Trump’s top National Security Advisor John Bolton further fearlessly declaring: “In this administration, we're not afraid to use the word Monroe Doctrine”. 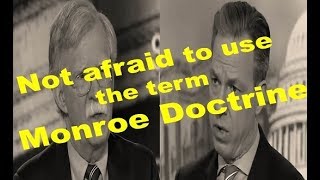 The catastrophic geopolitical consequence of the Obama Regime announcing in 2013 that the “era of the Monroe Doctrine is over”, this report concludes, provided the opening Communist China needed to begin flooding Greenland with rare Earth mining investments and its proposing to build three major airports there—that in turn has now set off a security panic in NATO involving a nightmare vision about Greenland getting so deep in debt to Chinese banks that it would end up letting these communists operate military aircraft from those airports—which President Trump himself is trying to quell by his offering to outright buy Greenland from Demark like Democrat Party President Harry Truman tried to do in the 1950’s—an offer quickly rebuffed by Danish Prime Minister Mette Frederiksen which, in turn, saw Trump immediately cancelling his 2 September visit with her—but was wise enough not to push too far and saw her saying that she is “open to an increased US military presence in Greenland”—but which she knows she couldn’t stop anyway even if she wanted to as Greenland is a military protected Monroe Doctrine protectorate of the United States—and all of which Trump is dealing with in his typical sardonic (grimly mocking) style saying he doesn’t plan to build one of his giant hotels there with his stating “I promise not to do this to Greenland!”—but is a promise that doesn’t include what he’s going to do with his new “Project Iceworm” nuclear missiles that will blow Communist China, if needed, out of Greenland forever. 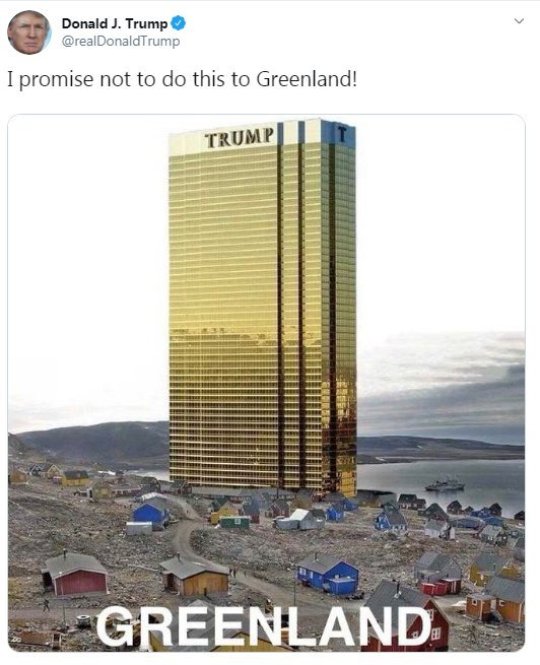 Because I’m busy doing this… 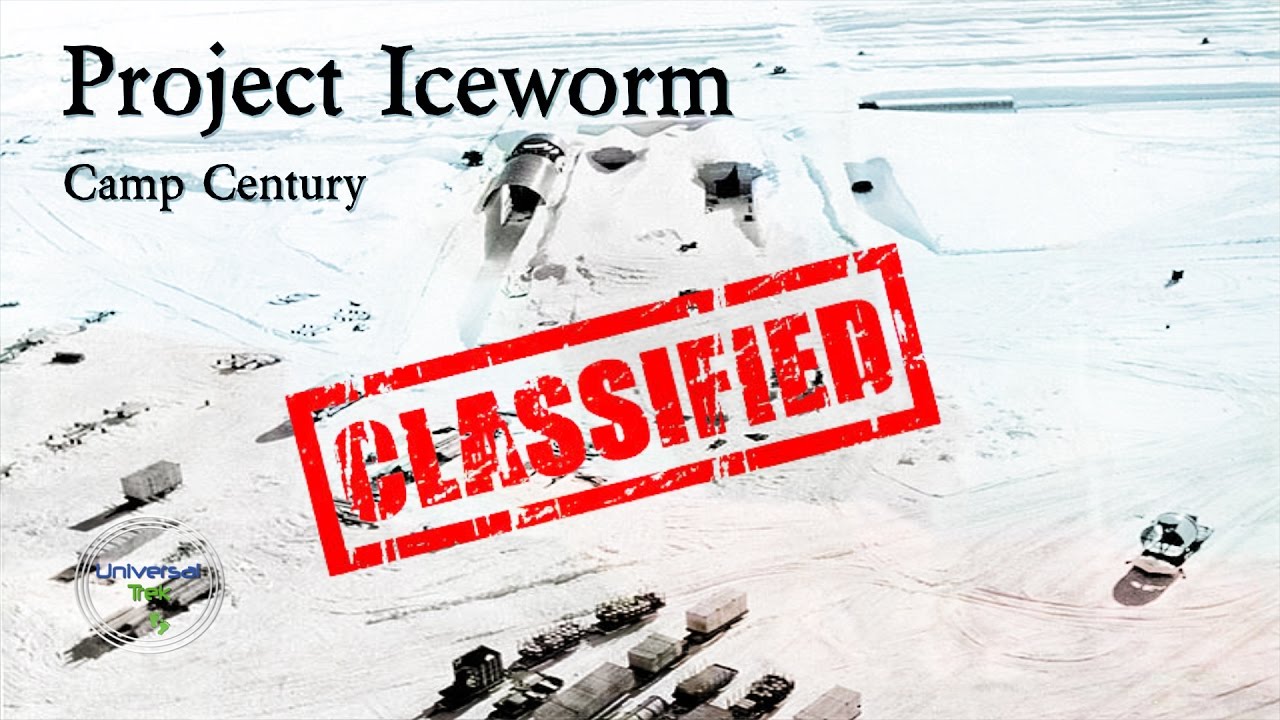 August 21, 2019 © EU and US all rights reserved. Permission to use this report in its entirety is granted under the condition it is linked  to its original source at WhatDoesItMean.Com. Freebase content licensed under CC-BY and GFDL.